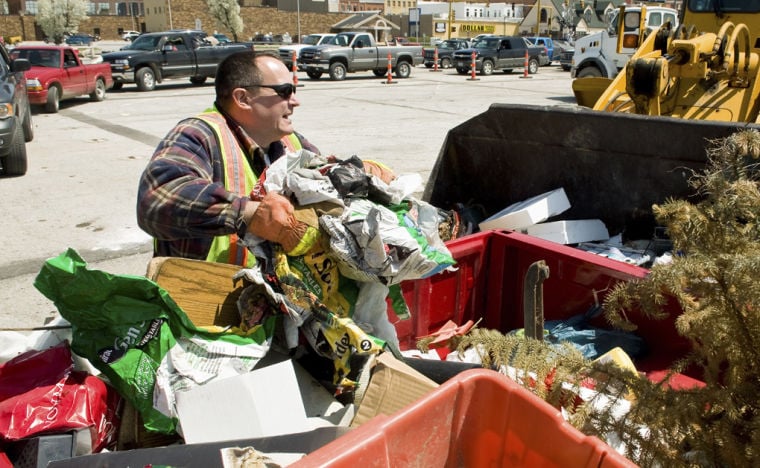 Worker Don Houk pulls trash out of the back of a pick up truck Saturday in the Market Street parking lot. Lines curved from the parking lot onto Market Street and across the bridge. - Courier Photo by: Doug Sundin

A line of vehicles snake from the Ottumwa/Wapello County Landfill Saturday during Make Ottumwa Shine. Ottumwa area residents to full advantage of the opportunity to dispose of their waste for free. - Courier Photo by: Doug Sundin

Worker Don Houk pulls trash out of the back of a pick up truck Saturday in the Market Street parking lot. Lines curved from the parking lot onto Market Street and across the bridge. - Courier Photo by: Doug Sundin

A line of vehicles snake from the Ottumwa/Wapello County Landfill Saturday during Make Ottumwa Shine. Ottumwa area residents to full advantage of the opportunity to dispose of their waste for free. - Courier Photo by: Doug Sundin

OTTUMWA — The trashiest traffic jam of the year took place Saturday on 165th Street and over on Market Street. “This is the busiest one I’ve seen,” said Jody Gates, the city’s director of solid waste. During Make Ottumwa Shine week, her department encouraged citizens to clean up their homes, neighborhoods and streets. On Saturday, they welcomed Ottumwans in record numbers to bring their trash to Market Street or the landfill; on Saturday, the fee was waived. The winding gravel road through the landfill was backed up, and cars coming to the gate were told the short trip from the gate to the dumping area would take 45 minutes. That was tough news for some drivers because the line extending down 165th Street, just waiting to get in the gate, was 40 vehicles long at 2:15 p.m. “It’s been like that all day. And longer,” said Gail Roberts, a landfill gatekeeper. Drivers who made it to the gate occasionally asked to use the gate’s pop machine or restroom. Two motorists said they had spent “about an hour” sitting on the highway to reach the gate. Another said she waited 1.5 hours, while a fourth said he had got in line before 12:30 p.m. and finally hit the gate at about 2:15. He was disappointed to hear he had another 45 minutes of stop-and-go driving left for a savings he estimated at about $20. “I probably spent that in gas,” he said as he climbed back into his pickup. Landfill staff said they empathized with the patrons. “The rain really messed us up,” said Ottumwa Wapello County Landfill Supervisor Steve Jones. In anticipation of the big event, his crew worked to create a stable parking area at the end of the gravel road so people could dump their cargo. “We try to have as big a landing pad for them [down there] as we can; we dumped 23 loads of rock [Friday],” he said. But rains came after — and during — the work, turning the solid pad area into a muddy mush. “We normally get 15, 20 [vehicles] in at a time. Today, it’s more like seven at a time,” Jones said. “As one goes out, we try to get another one in.” Though municipal employees would be staying late Saturday, and people waited longer than usual, Roberts said she sees the event as a success. She and co-worker Robin Craven seemed to be in high spirits Saturday. “We like our job!” said Craven as she wrote down the weight of each vehicle that entered, then weighed it again as it left to figure how much trash the landfill was taking in. If someone called about bringing in yard waste, Craven warned them about the wait, and told them something some citizens appeared to be unaware of: “We have a lot of people bringing in yard waste — that’s free all the time. If they want, they could wait until Monday.” Jones, Craven and Roberts had a system down where vehicles only stopped at the gate for about 15 seconds before being waved into the next line. Though the department didn’t have weight figures, or number of vehicles served during the weekend, by 2:30 p.m. on Saturday, the Market Street Lot had sent 36 dump trucks to the landfill. Each averaged about 2,000 pounds of trash, for 72,000 pounds of garbage coming from the other site. That’s where Gates was; the Market Street “Hydro” parking lot, organizing heavy equipment like end loaders, dump trucks and roll-off container movers lifting industrial-sized Dumpsters. Gates looked back at a long row of citizens’ vehicles and, as if unsure of whether to be proud, worried or both, sort of half-smiled. “We got a traffic jam, that’s for sure. That’s not going to make people happy.” The line into the Hydro lot backed all the way to Market Street. At least a dozen vehicles waited on the bridge with their blinkers on until the line inside the lot moved forward by one or two vehicles. Though the Market Street operation was set up as efficiently as possible, there was a non-stop parade of vehicles workers and the few volunteers had trouble keeping up with. “This time last year, it didn’t seem as long,” said Ottumwan Dan Sanders, who had just made it into the lot, but was still parked about 12 vehicles back from where the actual dumping took place. Gates had two lines going inside the lot; there were 21 pickups, vans and SUVs waiting in those lines. Sanders said he had time to talk to the Courier. Even if every pickup truck ahead of him managed to get unloaded in under five minutes each, he knew he’d still have a wait. “That’s all right. It would take me just as long [unloading] all this by myself as it does sitting here. ” he said. “Besides, what else do I have to do on a chilly day?” As each truck pulled up, volunteers and municipal workers descended on the cargo bed, rapidly throwing metal, wood or other recyclables in special bins, and regular trash into dump trucks. Often, the car’s driver didn’t even need to exit the vehicle. “I think they do a great job,” added Sanders as he watched, “and it’s a real service for Ottumwa. I’ve come every year for the past three years.” He had started cleaning out his and his mom’s garages Saturday morning, and was in line around noon. He said he felt a sense of accomplishment when he saw his clean garage before coming to Market Street. A record number of his fellow Wapello County residents appeared to also feel the effort would be worth it, too. “They were lining up at 7:15 [a.m.],” said Gates. “We weren’t opening here until 8 a.m.” Mark Newman can be reached at 683-5358 or by e-mail at mgnewman@mchsi.com.