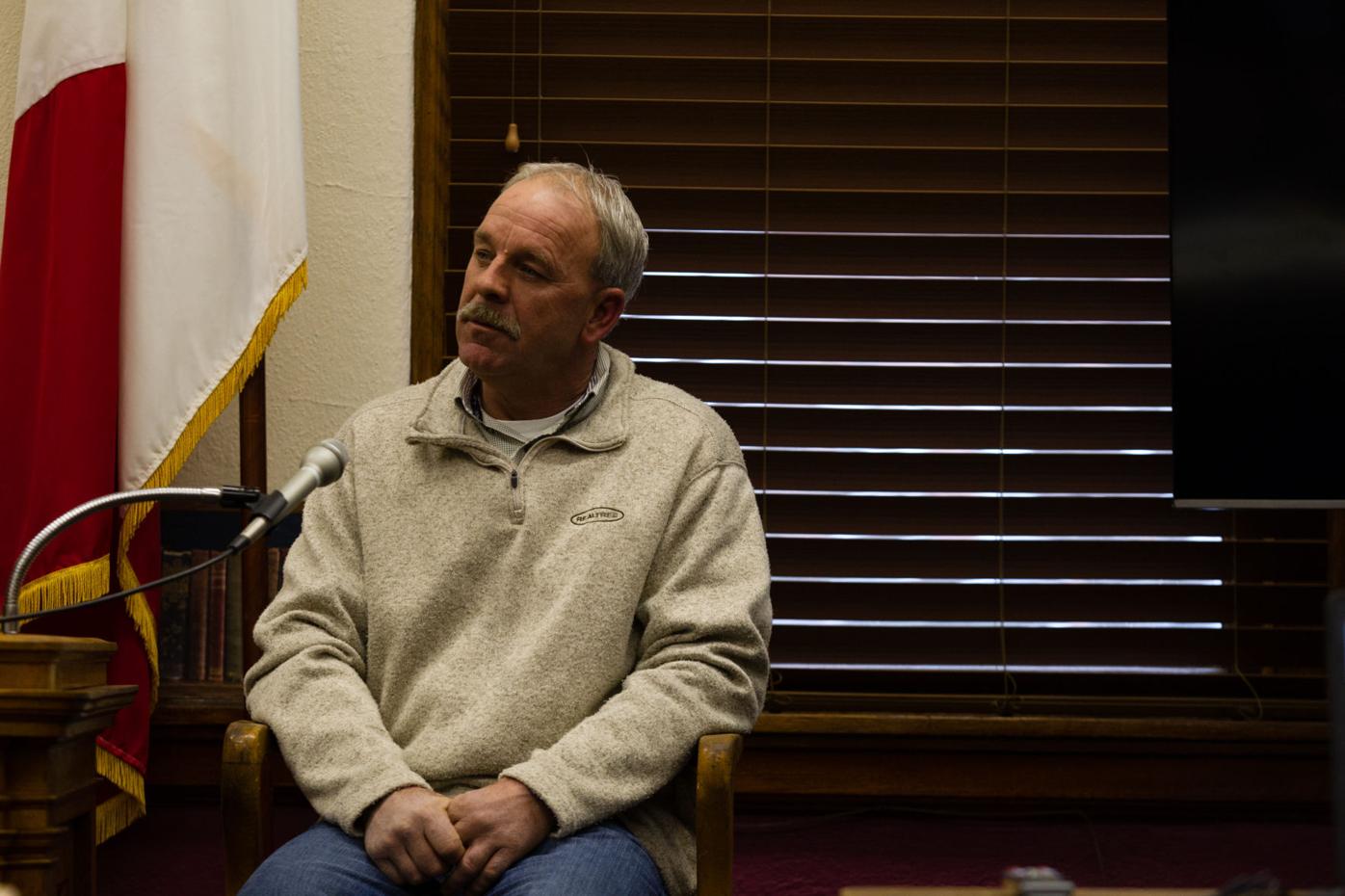 Kenneth Brown testifies during the first-degree murder trial against Ethan Davis on Monday. 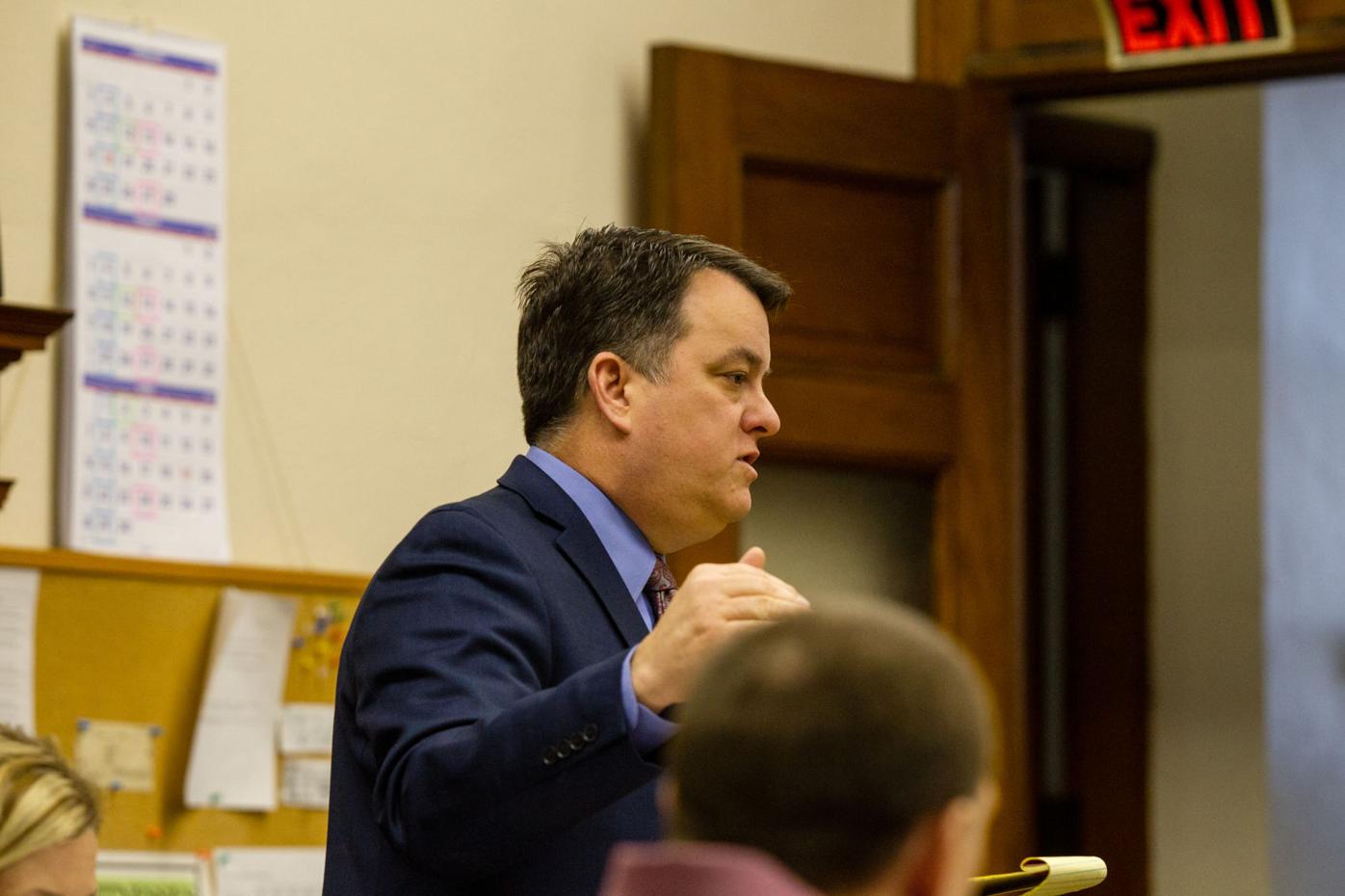 Kenneth Brown testifies during the first-degree murder trial against Ethan Davis on Monday.

An employee of L&W Quarries testified Monday that he heard rapid gunfire that concerned him near where authorities believe a deer hunter was killed.

Kenneth Brown testified that on Friday, Nov. 24, 2017, between 2-3 p.m. he was power washing a vehicle at the L&W Quarries maintenance facility located near the Sandy Branch public hunting grounds.

His testimony came on the third day of the first-degree murder trial against Ethan Landon Davis, 28, of Promise City.

He said closer to 3 p.m. that day he heard gunshots. The timing would coincide with the day authorities say Curtis Ross was killed in the near public hunting grounds. Ross was reported missing around 1 a.m. on Nov. 25, 2017, and found around 8 a.m. that morning after an extensive search.

“It was rapid fire shots that I was not familiar with,” Brown told the jury.

The shots raised concerned for Brown, who said he wasn’t sure which direction they came from but that they were close. He said he took cover.

The gunshots came in bursts, he said, about two shots per second.

During cross-examination of Brown, a witness called by the prosecution, Davis’ lead attorney Ken Duker asked to confirm he heard 60-90 shots fired that day.

“So, we’re talking anywhere from 60 to 90 shots that you heard?” Duker asked.

He testified that he believed the shots could have signaled a hunter in distress, but he didn’t report it until agents from the Iowa Division of Criminal Investigation showed up at his work site Monday.

“On Friday, you believed somebody was in distress and needs assistance based on the gun fires. You waited Saturday, Sunday and then Monday when you see DCI, that’s when you tell somebody?”

Beyond that, Duker pointed out that authorities waited a year until questioning Brown further in December 2018.

Davis formerly had worked at L&W Quarries for a brief period, 4-5 years before November 2017. Brown said he wasn’t aware of Davis ever being at the L&W maintenance location near the Sandy Branch area, however.

The jury got a clearer picture, albeit somewhat accidentally, of what’s only been referred to previously as an incident on Monday.

Joseph Babbitt, a Plano resident that’s a longtime friend of Davis, said he saw Davis the morning of Nov. 24, 2017.

Davis was in a rush and emotion, Babbitt said. Davis dropped his young son off at Babbitt’s residence after taking him from his ex-girlfriend.

Davis was charged for that incident, but a Wayne County jury found him guilty of lesser, non-felony, charges.

“He said he went and got his kid out of a crack house,” Babbitt said. “He walked in, fired a round in the air, grabbed his kid, and left.”

The remark is the most detail the jury has heard about the incident yet. They haven’t yet heard about things like the charges he was eventually charged with, though they know through other testimony Davis turned himself in a day later.

The jury also isn’t aware of the verdict of their counterparts last year in Wayne County.

Babbitt said Davis was visibly upset but was only at his residence approximately 90 seconds. Davis told Babbitt to call his mother, wrote down her number, and left the residence.

After the jury departed for the midmorning break, lawyers discussed with the judge whether the questioning from Davis' team about whether Davis was seen with the pistol he commonly carried meant character evidence could be brought in. Prosecutors also inquired about the newly introduced information about the Wayne County incident that was previously held from the trial.

Duker stated his questioning did not intend to elicit that information from Babbitt. Judge Myron Gookin said he didn't feel the response was responsive to Duker's question, and also that the court record wouldn't support the need to allow introduction of character evidence, either.

Kyle Ocker is the editor of the Daily Iowegian and can be reached at kocker@dailyiowegian.com or by calling (641) 856-6336. Follow him on Twitter @Kyle_Ocker