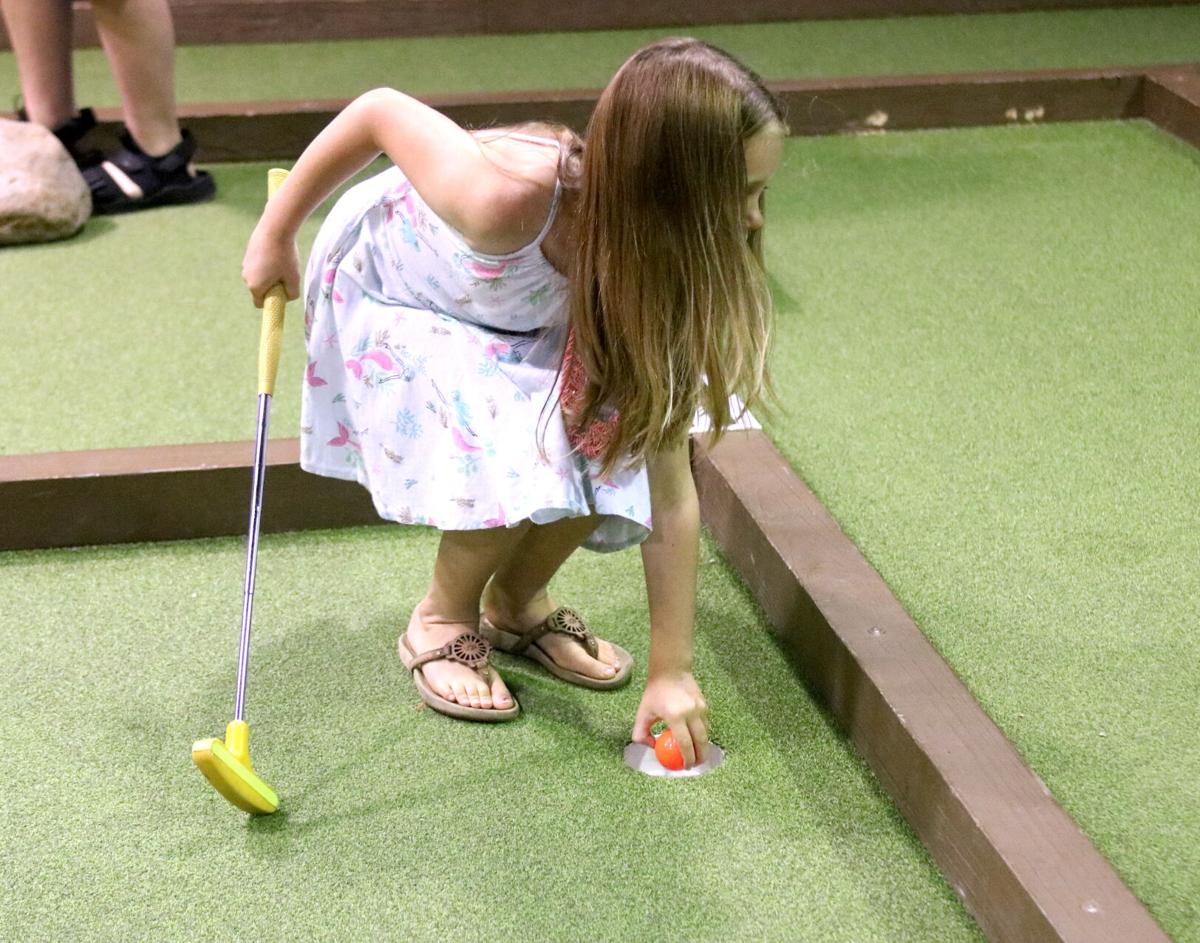 Elle Short reaches into the hole to pick up her golf ball during the Ottumwa YMCA’s Summer Safari trip to Tee-Rex Mini Golf at Quincy Place Mall Tuesday. 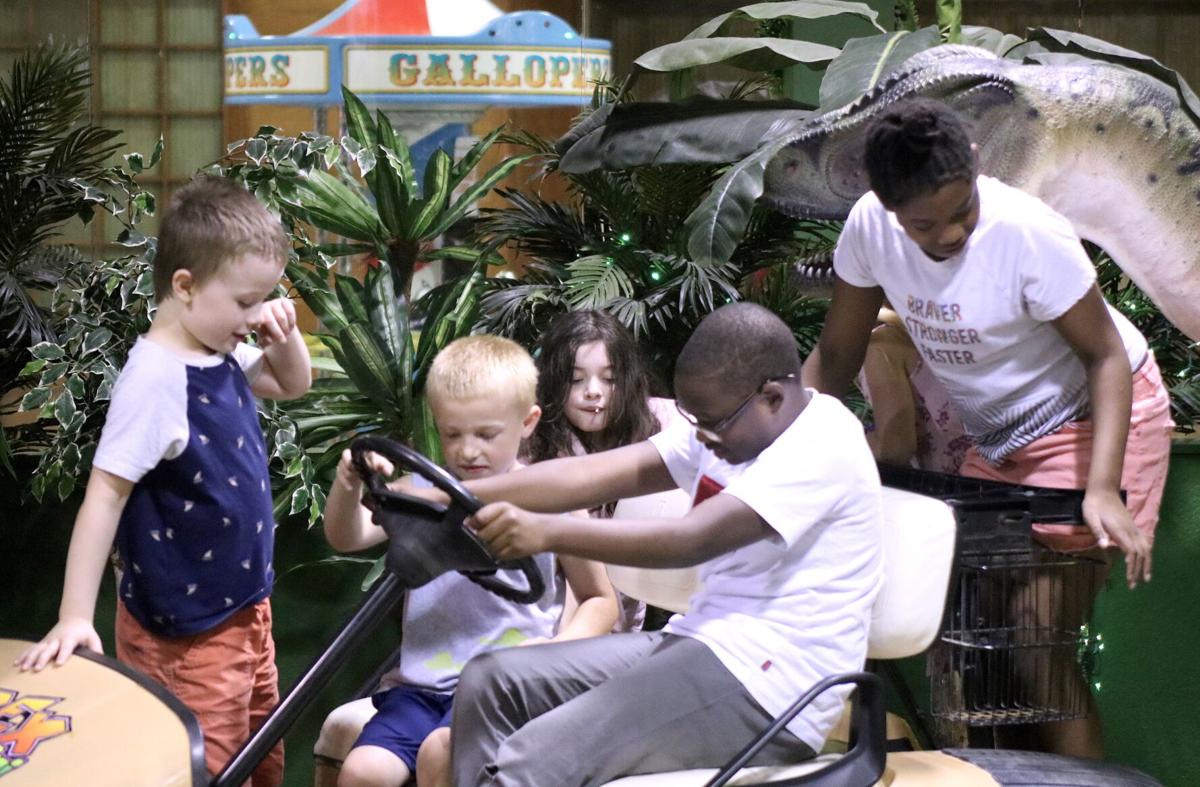 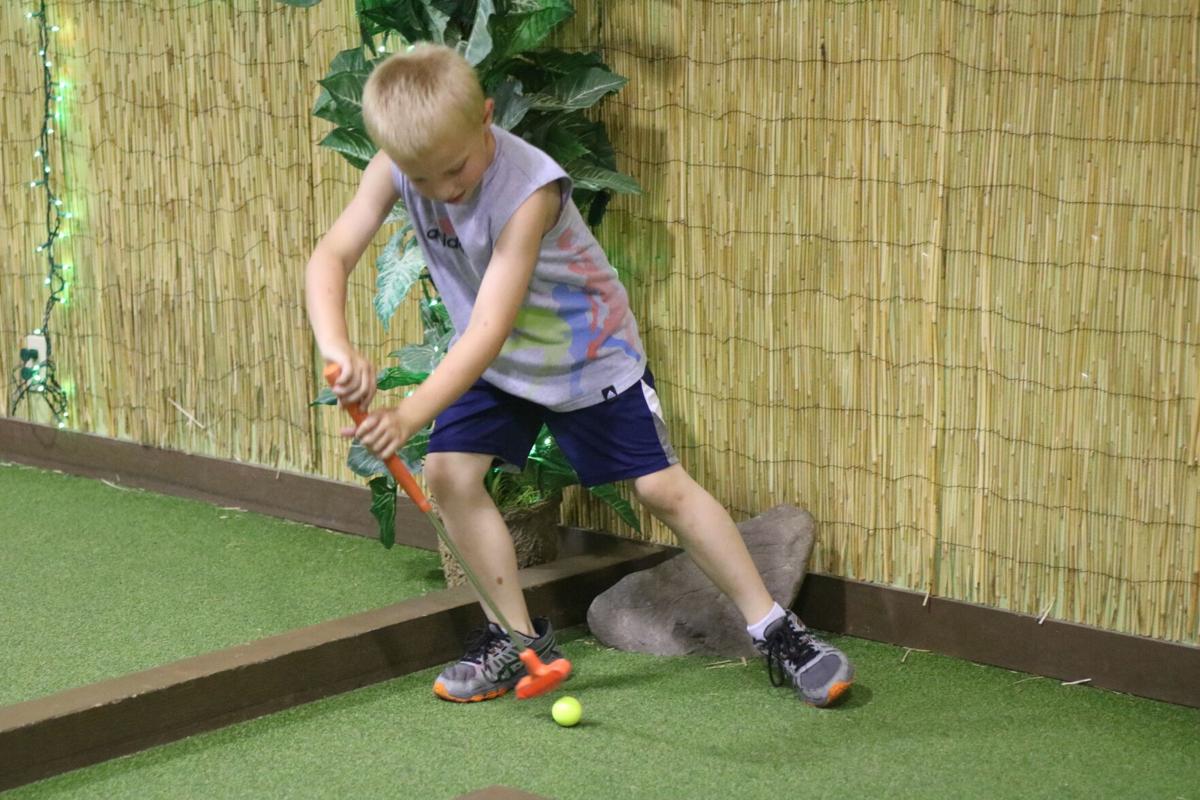 Elle Short reaches into the hole to pick up her golf ball during the Ottumwa YMCA’s Summer Safari trip to Tee-Rex Mini Golf at Quincy Place Mall Tuesday.

So when two members of the Ottumwa YMCA’s Summer Safari program played miniature golf Tuesday at Tee-Rex Mini Golf at Quincy Place Mall, they received the best of both worlds.

Times have certainly made it difficult for the YMCA’s child-development sector this year because of COVID-19, as some planned activities have had to be scrapped. The mini-golf activity is something the children look forward to.

“Last year we had 30 kids in the program on a daily basis, but now we don’t usually see more than 20,” said Sarahi Bahena, the lead teacher of the program. “Just to be able to get out of the classroom, get on the bus and come here is important to them.”

The children take their whacks both in the light and in the dark, some with more success than others. They climb on the golf cart tucked just inside the entrance. Tee-Rex owner Craig Payne said it’s a delight to see since the mall closed, and his operation has been reduced to Thursday through Sunday.

Except for Tuesdays with the Y kids.

“It’s different, but it’s great,” he said. “Usually when kids come in it’s with their families, but this has been a help to us. It’s really been a blessing for the Y kids to come in.”

“It’s tough because I’d like to go on more field trips,” said Myers, 11, glancing up at her teacher. “But I like being with my friends.”

“It’s nice to talk to my friends, and I like to go on the bus,” said Mason, 8, discussing the Summer Safari program. “You get to have fun. I like playing hide-and-seek, and we get to outside.”

Bahena said the program has had to cut back on several activities, namely a trip to the zoo and a kangaroo farm, both of which are popular. Bahena worked with a younger group of children at the Y before overseeing Summer Safari about a year ago.

“There have been a lot of changes,” she said. “Now we have to stop parents at the door and take the child after a temperature check. A lot of parents are working from home, so they feel it’s safer for their kids.”

Summer Safari began its every-Tuesday trip to Tee-Rex in the last month, Payne said. There are at least two groups that are divided up and make the trip.

The activity came about after Payne and his wife, Desi, sold packages for play at the mini golf course once the mall closed. Most of those packages were donated to the Y.

“I’d say 90 percent were donated to them,” Payne said. “We’ve been open three years this month. We feel that any money we receive from this has already made. So the Y had 11 kids here, so that was good for 11 passes out of the package.

“My wife has done a lot of things for the Y when it comes to exercise for the kids,” Payne said. “We’ve always worked with them pretty closely.”

Bahena said it’s important the kids have as much of a sense of normal as possible.

“We go to the gym to each lunch, get ready for naps, etc., and we give them responsibilities, so there is a schedule set out for them,” she said. “The pool at the Y was a big deal every Thursday, but we closed that. We have themed days like ‘Around the World’ and they do science experiments.

“But I don’t feel like we’re going to go back to 100 percent the way things were,” she said.