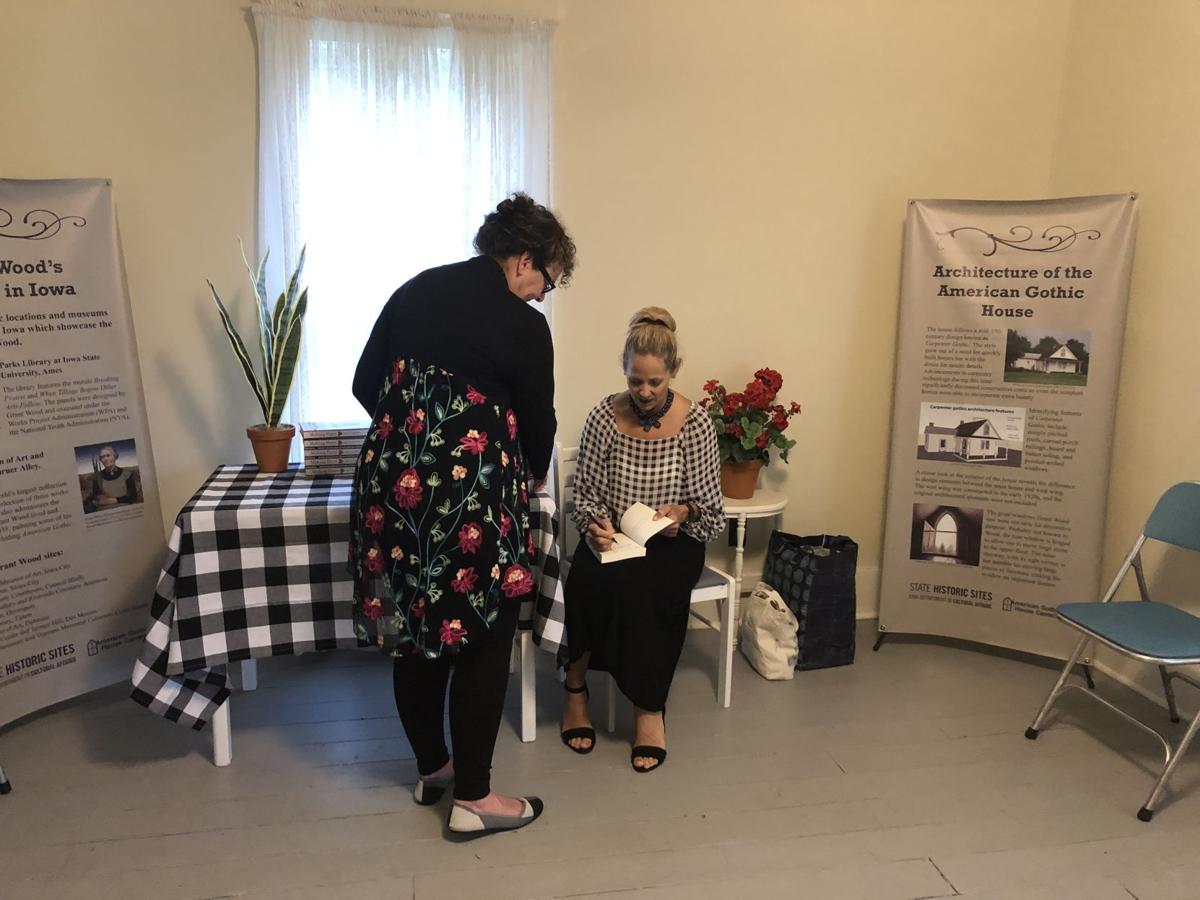 Beth Howard signs her first book for a new fan inside her former home at her book signing Saturday afternoon. 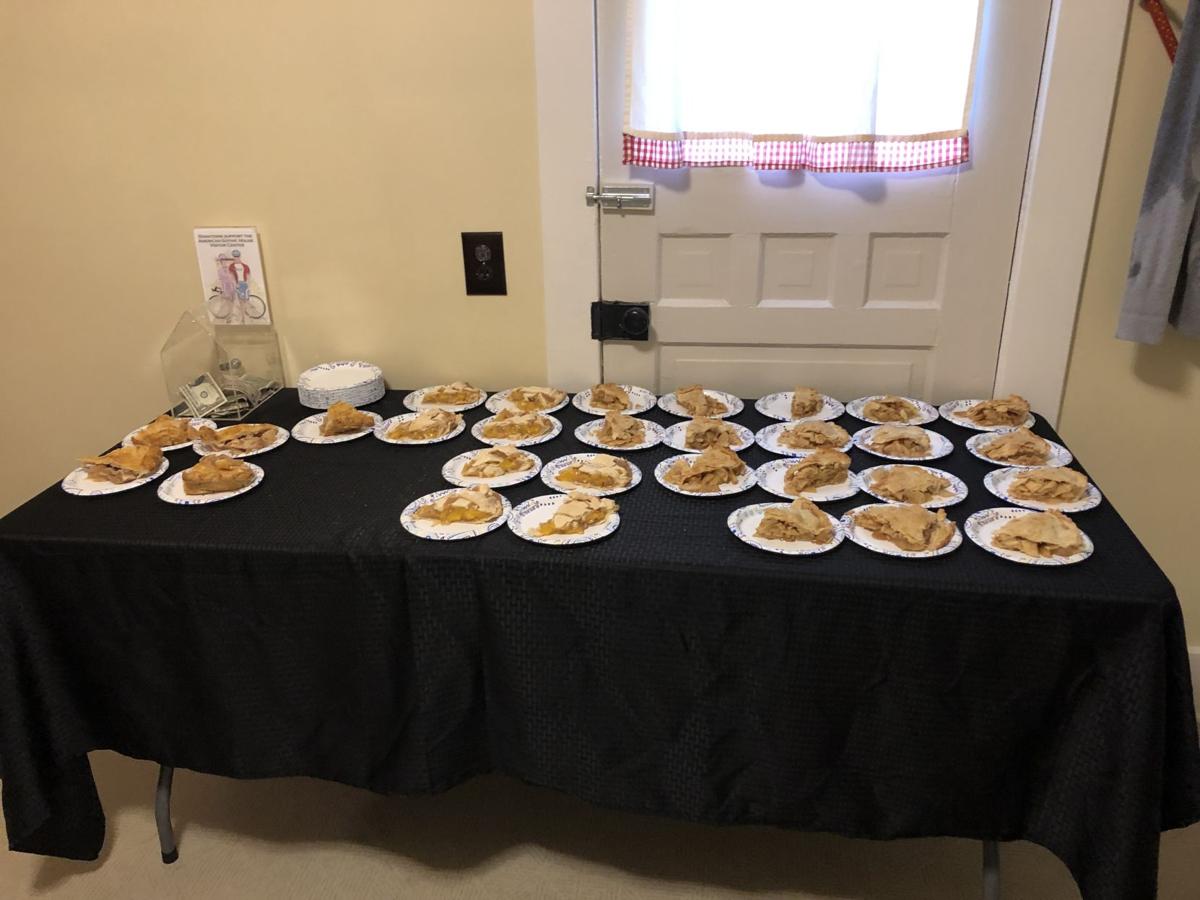 Pie was served on Saturday at Beth Howard’s book signing and talk. 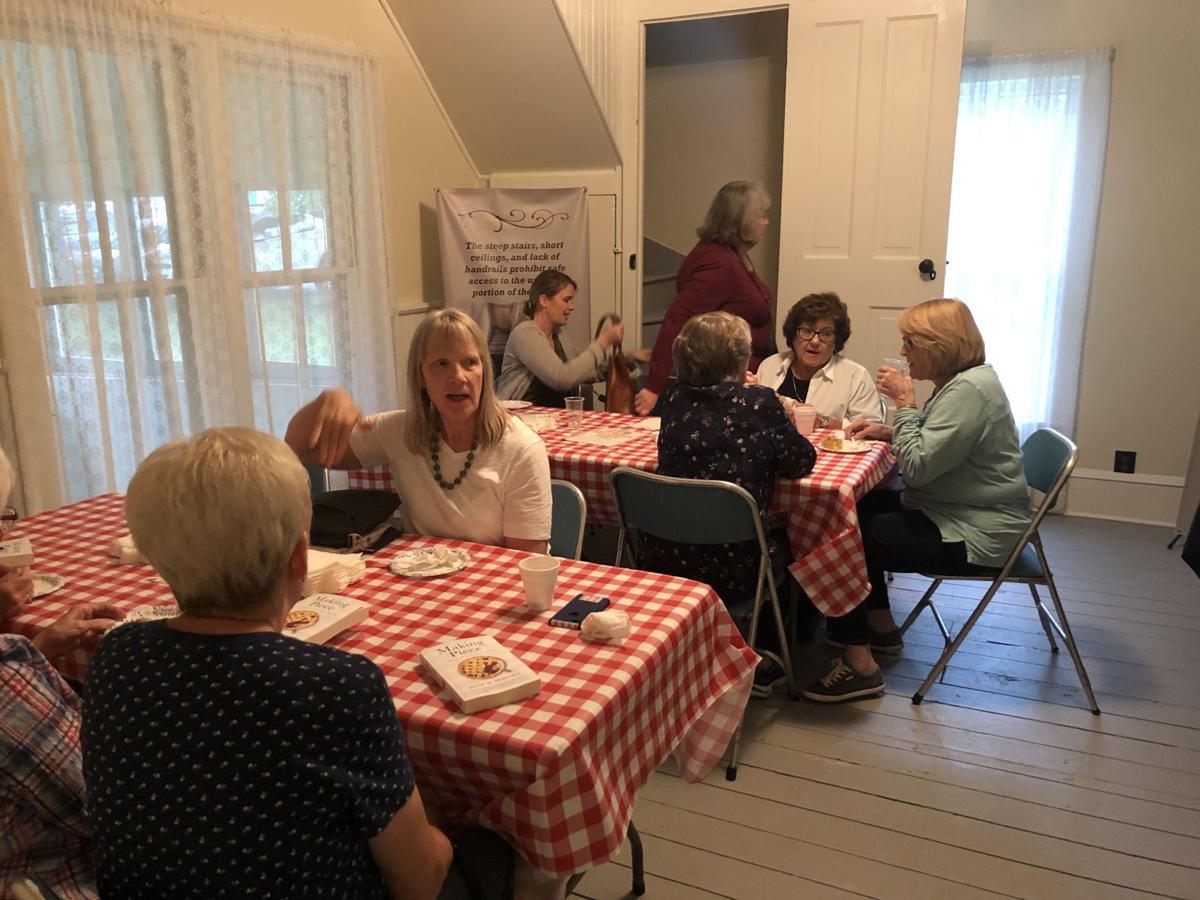 Beth Howard signs her first book for a new fan inside her former home at her book signing Saturday afternoon.

Pie was served on Saturday at Beth Howard’s book signing and talk.

ELDON — Beth Howard lived in the American Gothic House for four years. It was a homecoming for her, but returning on Saturday did not prepare her for tears and smiles as she spoke to many of her old friends and acquaintances.

Many of the people crowding inside the iconic landmark knew her as “the Pie Lady.” All of them leaned in with eagerness as she spoke of writing her first book “Making Piece: A Memoir of Love, Loss and Pie,” her life now and hearing about her most recent book “Hausfrau Honeymoon,” a book about her experiences living in Germany.

She had her share of memories when she lived at the house, like baking hundreds of pies each weekend in a small oven, or finding a large snake in her bathroom, but most of her memories involved people.

“Meeting the people all over the country and world to stop and have their picture taken was wonderful,” Howard said. “It was special to live in a place where you can just step outside and meet people from all over the world. One guy said to me, ‘It must be so nice to have a job that makes people so happy.’ It was hard work, but it was worth it.”

Coming back to her former home not only meant visiting her old friends and acquaintances, but also talking about the different themes of “Making Piece.” For Howard, this book was about grief mixed with how “pie can make the world a better place” and sharing it with other people and even taking chances in life.

It was hard for her to come after the loss of her husband and dog, but she wanted to so she could celebrate and reunite with the many attendees and have them take away these insights.

“The book is about taking chances,” she said. “Besides healing and grief and using pie as a way to connect with people, there’s a really strong message about taking a chance, and it’s OK to take a chance. People don’t do that. They don’t allow themselves to do that.”

Howard spoke about taking a chance when she decided to move to the house in August 2010 instead of moving to California. A lot has changed for her as she now lives on a farm near Donnellson, Iowa, and has accumulated fame since her first book came out. While fame might negatively affect someone, it didn’t for Howard.

“It’s still a privilege to be in a position where I can spread a positive message to people,” she said. “That recognition helps me spread that message about doing good things for other people like taking chances. It really comes back to pie, and it symbolizes so many things like kindness and generosity and building community.”

After Howard’s talk, people ate pie and even talked about what a privilege it was to have Howard come back and also about insights they took away from her book.

Patti Durflinger a close friend of Howard and a AGH board member came to support Howard. Durflinger even recalls Howard writing “Making Piece” while she was living in the house, even bringing her food at times while Howard wrote.

Durflinger praised Howard’s book, loved having her back and reflected on what insights she took away.

“We get so busy in our lives,” Durflinger said. “Life can be messy, but I took away that doing something for someone else is important and it’s important to be kind. I haven’t experienced grief like she has and encountered the grief process, but this book did bring some light and hope and sunshine.”

Unlike Durflinger, it was Caryn Westman’s first time meeting Howard and also buying her book. Westman wanted to come to Howard’s book signing because she heard Howard was a great writer and because she wanted to support her daughter Kelsy, the AGH administrator.

“It would be interesting to be in this fishbowl like she described about people coming and just show up; it brought a lot of visitors to life for me,” Westman said. “Hearing her talk about living here and these people and their real stories of coming in just to see this house, it’s just amazing.”

Westman took away the emotions Howard had and the notion that life can be special if one takes the time to cultivate it.