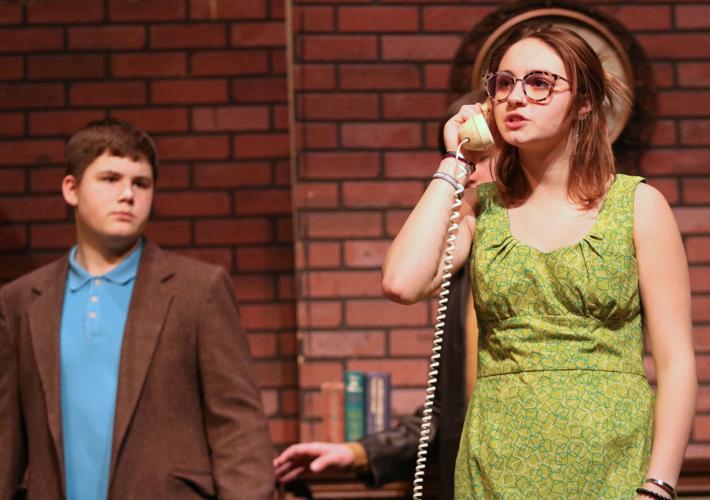 Emma McIntyre, who plays a blind person in the Ottumwa HigH School play "Wait Until Dark," talks on the phone during the first act of a rehearsal Monday in the OHS auditorium. The play will be performed Friday, Saturday and Sunday. 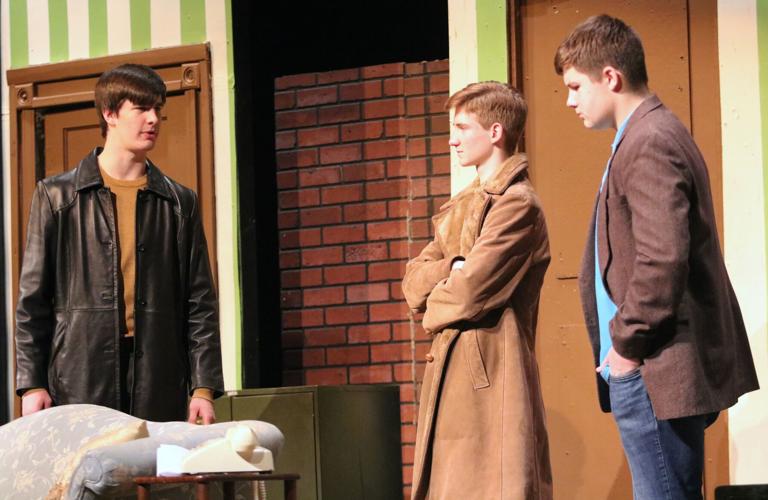 Left to right, Roderick Rath, Xander Johnson and Miles Hedgecock, perform the first act of "Wait Until Dark," the Ottumwa High School fall play that was delayed, Monday in the OHS auditorium. The play will run Friday, Saturday and Sunday at the auditorium.

Emma McIntyre, who plays a blind person in the Ottumwa HigH School play "Wait Until Dark," talks on the phone during the first act of a rehearsal Monday in the OHS auditorium. The play will be performed Friday, Saturday and Sunday.

Left to right, Roderick Rath, Xander Johnson and Miles Hedgecock, perform the first act of "Wait Until Dark," the Ottumwa High School fall play that was delayed, Monday in the OHS auditorium. The play will run Friday, Saturday and Sunday at the auditorium.

OTTUMWA — Ottumwa High School theater director Jeff Leonard took out a withered and cracked script that once was used by former theater director Mike Ernst, and handed it to one of his crew members.

Leonard couldn't think of a much better performance to put on this weekend than one no one has seen in 50 years.

Starting Friday and running through Sunday, the theater group will put on "Wait Until Dark," a two-act performance featuring just eight characters and plenty of conning and suspense. The performance, delayed since the fall for various conflicts, kicks off what will be a busy, but exciting, sprint to the end of the school year.

"The script is falling apart, but it has all of the stage movements, all of the lighting cues," Leonard said. "We've made a couple of changes based on what he did, but about 90% of it is the original show.

"Mike has remained a very good friend of mine, and one of my heroes. This got his blessing."

Freshman Emma McIntyre plays blind woman Suzy Hendrix, while senior Roderick Rath plays Roat, who is what Rath calls "the head of the thugs." The play focuses on a doll given to Hendrix's husband that is filled with heroin. Two other thugs join in to try to find the heroin, while trying to be elusive to the blind Hendrix. The play takes place in a basement apartment in Greenwich Village in New York City.

"(The husband) loses the doll in the apartment, and there's like two small thugs that just got out of prison, and they're looking around this apartment," Rath said. "Then the third guy shows up, and he's looking for the doll, and will use these two gentlemen to get it.

"The lady is blind, so they're lying to her about who they are because she can't see them," Rath said. "Their plan is to get the doll and leave, but the blind lady is smarter than they think."

McIntyre is one of three freshmen in the play, and has found playing a blind person difficult.

"It's incredibly hard because I have to have all the mannerisms," she said. "I had to a learn a bunch of new mannerisms and find ways to move around the set and not make obvious that I'm acting like a blind person.

"If you don't act that out correctly in certain scenes, it throws the whole thing off because they're trying to con me. If I act like I can see them, it doesn't make sense."

Leonard described the play as a "chess game," but he said it's been a challenge because there is a lot of dialogue and no music.

"No one knew this show before we started, so the memorization has been the biggest challenge," he said. "And we're going to have a couple special effects in the show that are going to make it very interesting."

The actors said the show is easy to following along if the audience is paying attention, and Leonard said the final scene is "very dramatic."

"It's very much in the style of an old-time radio thriller," he said. "I've had a couple people ask me if it's scary, and it's not. It's just thrilling."

Actors won't have long to wait before preparing for their next performance, which will be the theater department's first Theater Showcase on Feb. 3 at 6 p.m., featuring snippets of previous performances as a fundraiser, with a free-will donation serving as admission.

"Our theater kids are going to showcase themselves and their talents, so we'll be doing pieces from 'Legally Blonde,' which we did last year. There will be some other acting, and it's going to be a really good time," Leonard said. "It'll be a chance to showcase some of the people that aren't on stage as much as they should be."

Then comes a performance April 21-23 in which the fine arts department will perform a world-premiere musical written specifically by Rath called "11 O'Clock." Tickets for that will go on sale in February.

"Roderick had the idea for the show, and it's just gone on from there," Leonard said. "Having a senior write a musical, or any show for us, that's never happened before, and it takes a very special skillset to be able to do that. I mean, he's written the words, the lyrics, the orchestration.

"Everything you will hear came out of his brain, and it's pretty remarkable," he said. "I've read it and heard it, and it's very good. Our goal is to sell out all four performances. I hope it goes over well, and I think it will."

Tickets for "Wait Until Dark" are $10 for adults and $5 for students, and are available at the door. Friday and Saturday performances are at 7 p.m., while Sunday's performance will be at 1 p.m. at the OHS Auditorium.