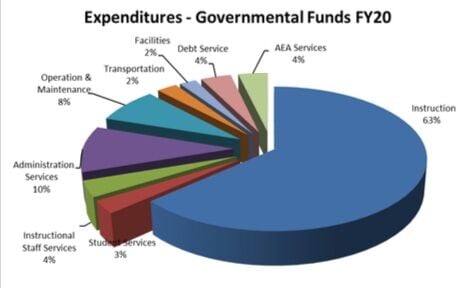 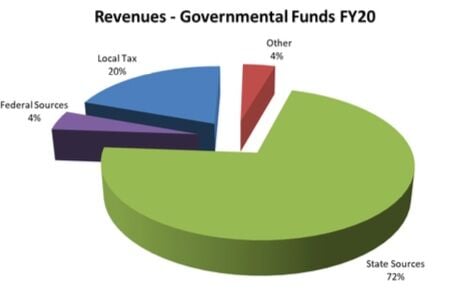 OTTUMWA — The finances of the Ottumwa Community School District are on solid ground.

Caleb Wubbles of Hunt & Associates presented findings from the 2020 Fiscal Year audit report to the board this week. The audit found that the district’s “cash flows thereof for the year then ended in accordance with U.S. generally accepted accounting principals,” reads the opinion summary.

“This is the best outcome you can have on a financial statement audit. I would like to congratulate you on those results,” Wubbles said.

He then summarized some key findings in the 100-page report.

“This is something the district should be mindful of,” Wubbles said. “If it raises too high, or remains too high for too long, the Iowa Department of Education could come in a make you lower your levy rate for the following years to lower the fund balance.”

District CFO John Berg said later in the meeting that some of the increase in savings came from savings the district saw in the early shutdown due to COVID-19 last year as well as CAREs money that was received late in the year but not yet spent at the time of the audit. “We’ll work to bring that down,” he said. “Sitting on money and not using it, that’s not what the state or property tax owners give us funds for.”

The lower levy rate, he added, is also something the district has been proactively looking at, particularly with Tuesday’s upcoming vote on the PPEL funds. “We are lowering the levy rate in the general fund to make room for it because we have those resources that we built up.”

From there, he moved on to the district’s capital assets. “This is by far the largest number that appears on the financial statement for any school district,” Wubbles said.

Ottumwa’s current net capital assets total $47.6 million, a decrease from $49.2 million, with the loss attributed to “the depreciation recognized over the lives of the useful assets,” he said.

Superintendent Mike McGrory made a couple of notes regarding the district’s buildings later in the meeting. The district officially closed on the Market on Main building on Monday, and they have been meeting with school officials and architects to begin envisioning construction and renovation plans for the buildings that were recently announced.

Wubbles then moved on to categorical funding. This is funding that has to do with specialized programs including home school assistance, gifted and talented, limited English proficient, successful progression for early readers, professional development areas, and textbook aid for nonpublic students.

The total carryover for that balance was at just over $1.7 million, with very little change from $1.8 million the year before. “It’s good to see that management is allocating those funds consistently and not running into problems,” Wubbles said. However, if the carryover raises too high in specific programs, funding for them would be reduced.

Berg said that the district has been targeting some of those categorical fund balances with investments in staff hires that were announced by the district last month as a result of new initiatives being put in place at the schools. “We’re making an active effort to use those funds as they’re designed and fill in positions in the district where they’re needed,” he said.

The budgetary comparison had favorable results as well. In this section, the actual expenditures were compared to the actual expenditures. It was found that revenues came in about 2% lower than was actually budgeted. “This is actually very good for your typical school district,” Wubbles said. “Expenditures were not exceeded in any functions during the year. This shows us that the district is managing the budgeting process actively and taking a proactive stance on remaining within the budgeted amounts.”

To close out the summary, Wubbles went over numbers regarding a couple of specified funds. “The governmental activities and the Enterprise, Youth Care Fund had deficit unrestricted net positions of $10,345,258 and $54,123, respectively,” the report reads. “These deficit balances were caused by the recognition of the District’s proportionate share of the IPERS pension liability” and related outflows and inflows of resources in the district’s financial statements.

Wubbles said the youth care fund number “was not very significant.” Berg made note of the youth care fund later in the meeting during his financial update. “That’s the one where we had a really rough summer. We took in a lot less revenue,” he said. “This number doesn’t reflect monies that we’re going to transfer over into that account from the CARES funds from this summer, so we’ll replenish it a little bit.”

“It’s something that’s there that we have to deal with, but it doesn’t affect the operations of the district,” Berg added.

“We always expect to have a couple findings. It’s good to have a review to find them,” Berg said. “It’s hard to run through the amount of money we do and the transactions without some things that get missed. It’s always helpful.”