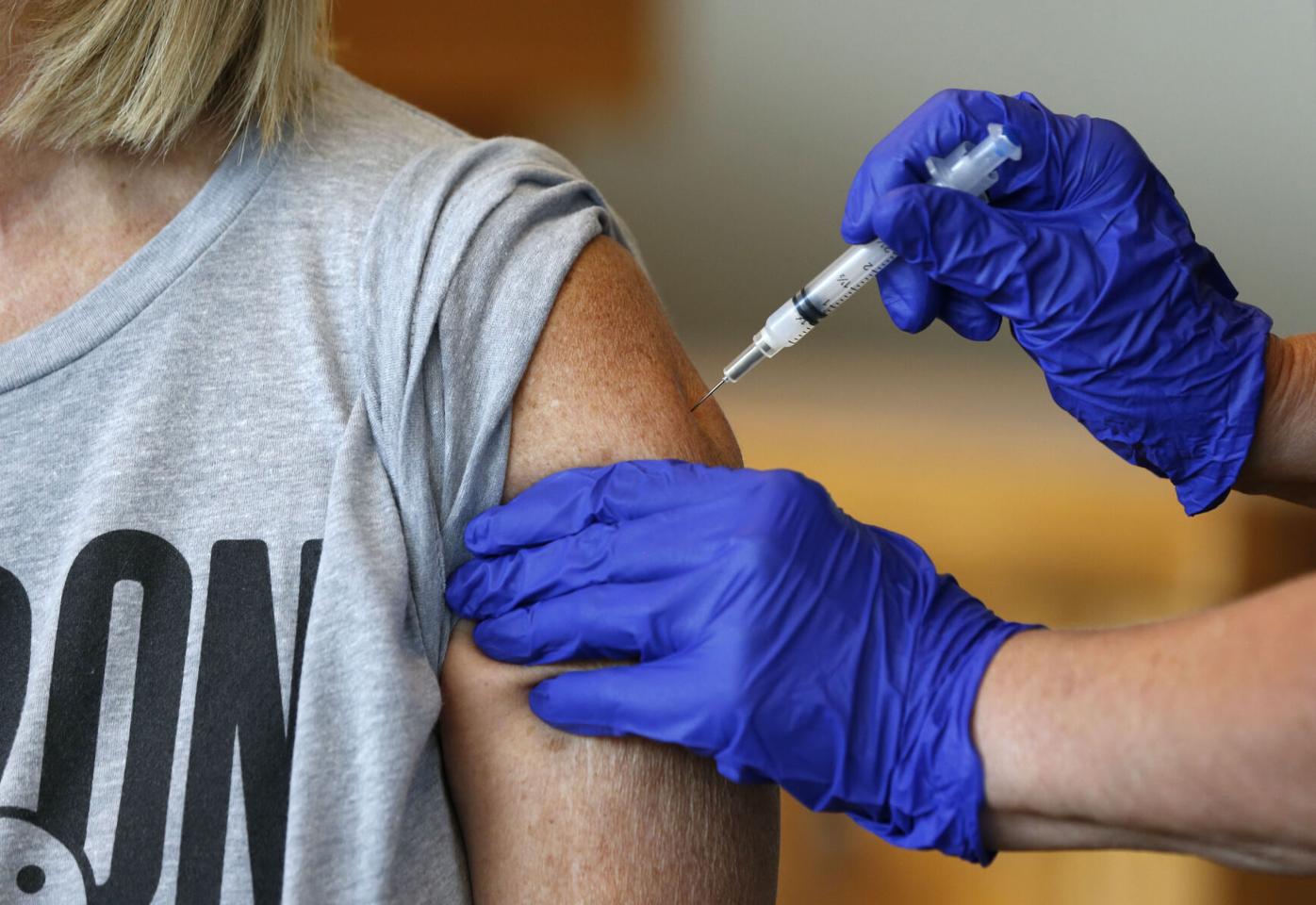 In this Monday, July 12, 2021, file photo, Karen Martin receives a COVID-19 vaccine at a vaccination clinic hosted by James River Church West Campus in conjunction with Jordan Valley Community Health Center in Springfield, Mo. COVID-19 cases have doubled over the past three weeks, driven by the fast-spreading delta variant, lagging vaccination rates in some states and Fourth of July gatherings. The five states with the biggest two-week jump in cases per capita all had lower rates, Missouri, 45.9%; Arkansas, 43%, Nevada, 50.9%, Louisiana, 39.2% and Utah, 49.5%. 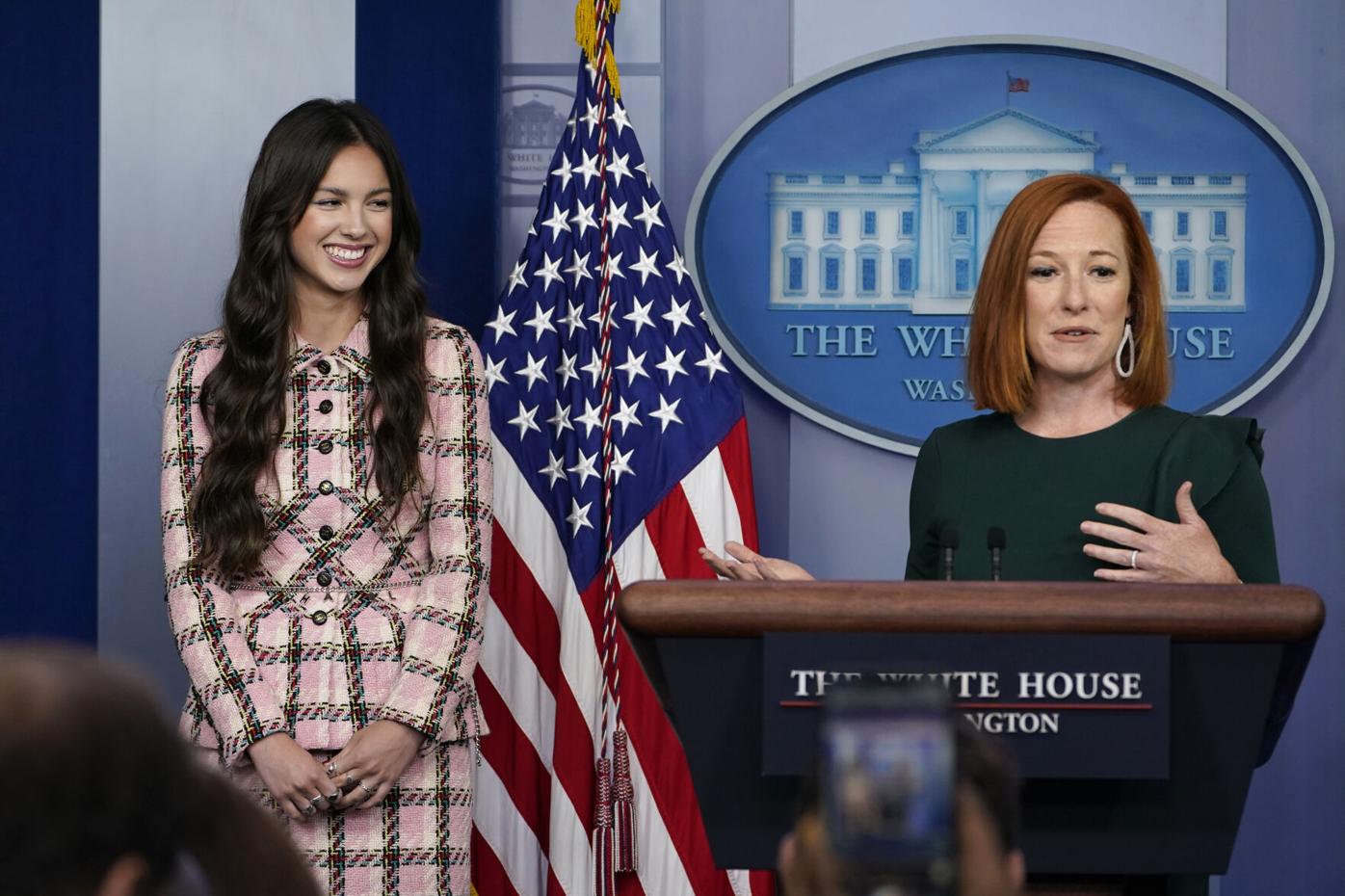 In this Monday, July 12, 2021, file photo, Karen Martin receives a COVID-19 vaccine at a vaccination clinic hosted by James River Church West Campus in conjunction with Jordan Valley Community Health Center in Springfield, Mo. COVID-19 cases have doubled over the past three weeks, driven by the fast-spreading delta variant, lagging vaccination rates in some states and Fourth of July gatherings. The five states with the biggest two-week jump in cases per capita all had lower rates, Missouri, 45.9%; Arkansas, 43%, Nevada, 50.9%, Louisiana, 39.2% and Utah, 49.5%.

OTTUMWA — The new coronavirus cases added in the Courier’s coverage area in the past week have mostly been in the elderly.

Data from the Iowa Department of Public Health, updated Wednesday, 18 new positive tests in the six-county region in the last week. Wapello County has seven of those new cases.

Of the new cases, nearly two-thirds are in adults age 70-79-years-old.

Around Iowa, there were 80 hospitalized with COVID, including 26 in an intensive care unit. Those numbers are up slightly from mid-June but in line with what’s been reported in recent weeks. The record for hospitalizations in the state was more than 1,500 in November.

A new death was reported in the past week in Wapello County, the county’s 123rd since the pandemic began last March. Other area counties stayed the same in death counties, with 49 reported to date in Appanoose, 35 in Jefferson, 33 in Monroe, 25 in Davis and 18 in Van Buren.

State data says about 46.2% of Iowans are considered fully vaccinated, a number that lags behind the federal average. About 48.2% of the American population is vaccinated.

Iowa ranks 24th in the nation among states and their vaccination rates per capita, according to data from the Centers for Disease Control and Prevention.

About 38% of Wapello County residents are considered fully vaccinated.

Low vaccination rates are being blamed for a rise in COVID-19 deaths and cases around the world, the Associated Press reported.

The World Health Organization reported Wednesday that deaths climbed last week after nine straight weeks of decline. It recorded more than 55,000 lives lost, a 3% increase from the week before.

Cases rose 10% last week to nearly 3 million, with the highest numbers recorded in Brazil, India, Indonesia and Britain, WHO said.

The reversal has been attributed to low vaccination rates, the relaxation of mask rules and other precautions, and the swift spread of the more-contagious delta variant, which WHO said has now been identified in 111 countries and is expected to become globally dominant in the coming months.

Sarah McCool, a professor of public health at Georgia State University, said the combination amounts to a "recipe for a potential tinderbox.”

"It’s important that we recognize that COVID has the potential for explosive outbreaks,’’ warned Dr. David Dowdy, an infectious disease specialist at Johns Hopkins University.

In the U.S., with one of the highest vaccination rates in the world, newly confirmed infections per day have doubled over the past two weeks to an average of about 24,000, though deaths are still on a downward trajectory at around 260 a day.

Los Angeles County, the most populous county in the U.S., reported its fifth straight day Tuesday of more than 1,000 new cases.

Tokyo is under a fourth state of emergency ahead of the Summer Games this month, with infections climbing fast and hospital beds filling up. Experts have said caseloads could rise above 1,000 before the Olympics and multiply to thousands during the games.

Chicago announced that unvaccinated travelers from Missouri and Arkansas must either quarantine for 10 days or have a negative COVID-19 test.

Connecticut lawmakers voted Wednesday to again extend Democratic Gov. Ned Lamont’s emergency declarations, despite pushback from Republicans and some Democrats who argued it is time to get back to normal. Among other things, the move keeps in place orders requiring masks in certain settings

As troubling as the figures are around the world, they are still well below the alarming numbers seen earlier this year.

Seven months into the vaccination drive, global deaths are down to around 7,900 a day, after topping out at over 18,000 a day in January, according to Johns Hopkins data. Cases are running at around 450,000 a day, down by half since their peak in late April.

WHO acknowledged that many countries are now facing “considerable pressure” to lift all remaining precautions but warned that failing to do it the right way will just give the virus more opportunity to spread.

Pressure is growing worldwide to boost vaccination rates to counter the rise.

“If you have been waiting, if you have been on the fence, sign up and get that shot as soon as possible,” New York City Health Commissioner Dr. Dave Chokshi pleaded.

Eighteen-year-old actress and singer Olivia Rodrigo appeared at the White House on Wednesday as part of an effort by President Joe Biden to persuade more young people. Getting a vaccination is something "you can do more easily than ever before,” she said.

While nearly 160 million Americans have been fully vaccinated, or over 55% of the population, young adults have shown less interest.

Ohio is planning another prize program to encourage vaccinations, and Gov. Mike DeWine urged the government to give the vaccines full approval instead of just emergency authorization to ease people's doubts.

In Missouri, second only to Arkansas with the worst COVID-19 diagnosis rate over the past week, political leaders in and around St. Louis have stepped up efforts to get people vaccinated through gift cards and by enlisting beauty salons and barbershops to dispense information.

The Associated Press contributed to this report.