ELDON — A Wapello County man faces federal charges after his arrest on a warrant for transportation of child pornography.

Troy Davis, 56, Eldon, was arrested Tuesday. His arrest followed a Tuesday morning search of his home by law enforcement.

Special Agent Chris Thomas of the Iowa Department of Public Safety, who also serves as an officer with the FBI’s Child Exploitation Task Force, wrote in an affidavit filed in court that Davis “sent multiple images of child pornography using his Facebook and Instagram accounts” in February.

Tips came in from the National Center for Missing and Exploited Children in February and April of this year that child pornography was being sent on accounts linked to Davis. The files included images of young boys engaging in sex acts, including with adult men.

The search of Davis’ home included seizure of a computer and two cellphones. One of the phones included an app used to encrypt conversations, and Thomas said it had several open chats between Davis and others that included additional child pornography. 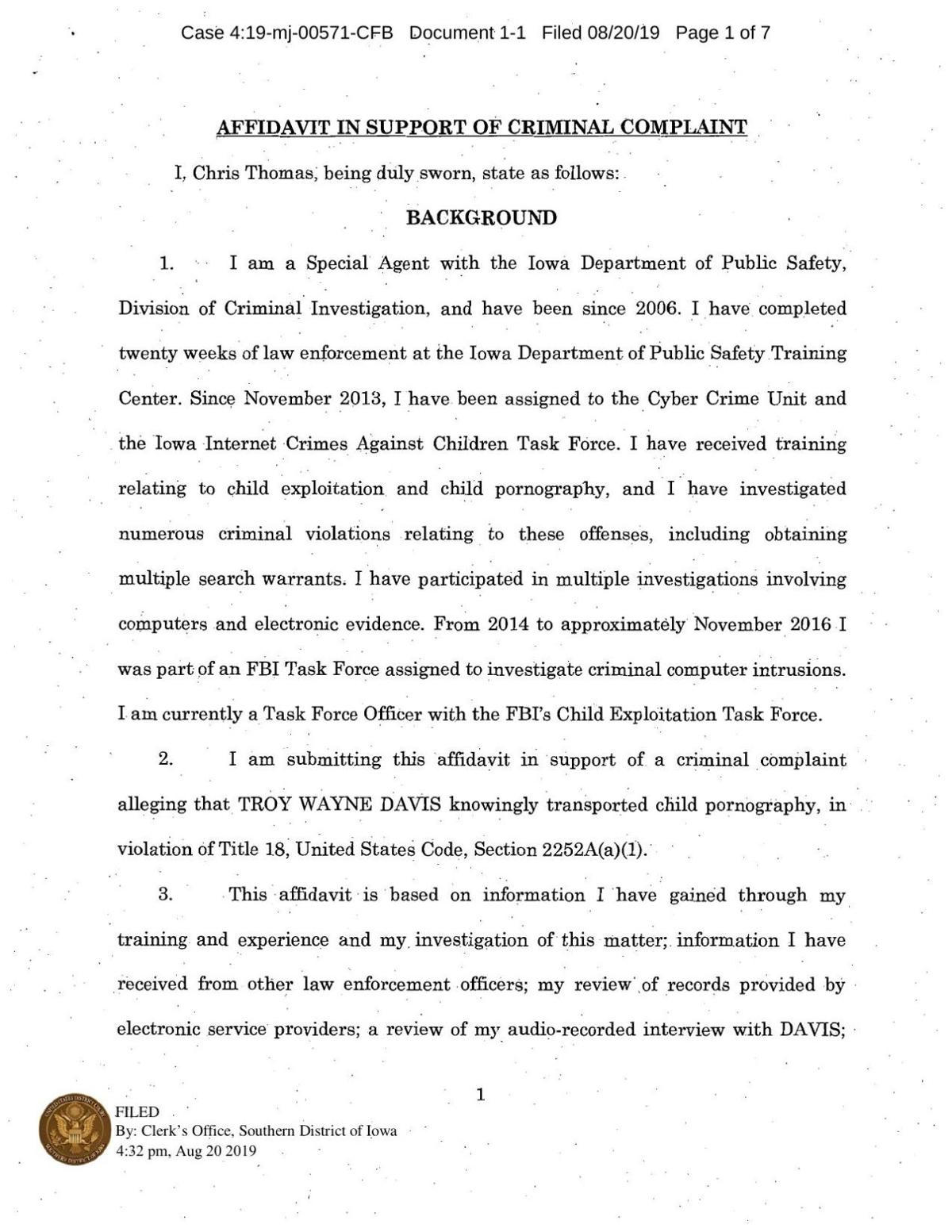 Davis faces a single charge, but there are indications federal prosecutors could add more. Thomas wrote that Davis “has solicited minors for sex via the internet but none of them has shown up.”

Davis has previously faced charges involving sexual conduct with a minor and is listed on Iowa’s sex offender registry. In February 1998 he was charged with two counts of second-degree sexual abuse, a Class B felony, three counts of lascivious acts with a child, a Class D felony, and dissemination or exhibition of obscene materials to a minor.

That case resulted in a plea agreement, with Davis admitting guilt on two counts of lascivious acts with a child. He was given a suspended sentence in October of 1998, and later ordered to a residential treatment facility.

In November 2002 he was arraigned on a probation violation in the case. Judge Kirk Daily ordered Davis’ probation revoked and imposed the original five-year prison sentence.

The federal charge carries a sentence of five to 20 years in prison. But, if Davis is convicted and his state conviction is deemed an aggravating circumstance, the sentence could rise to 15-40 years.