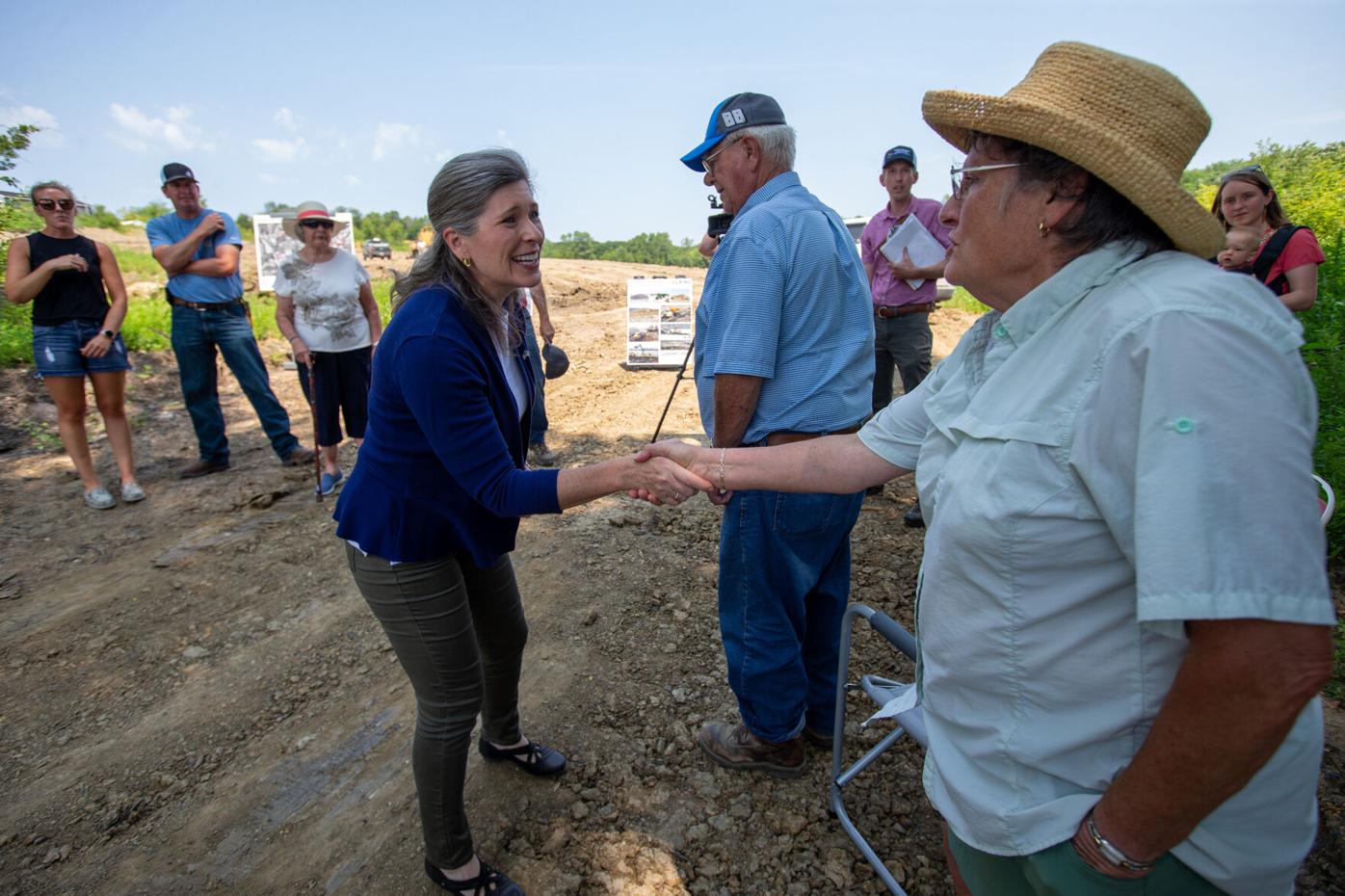 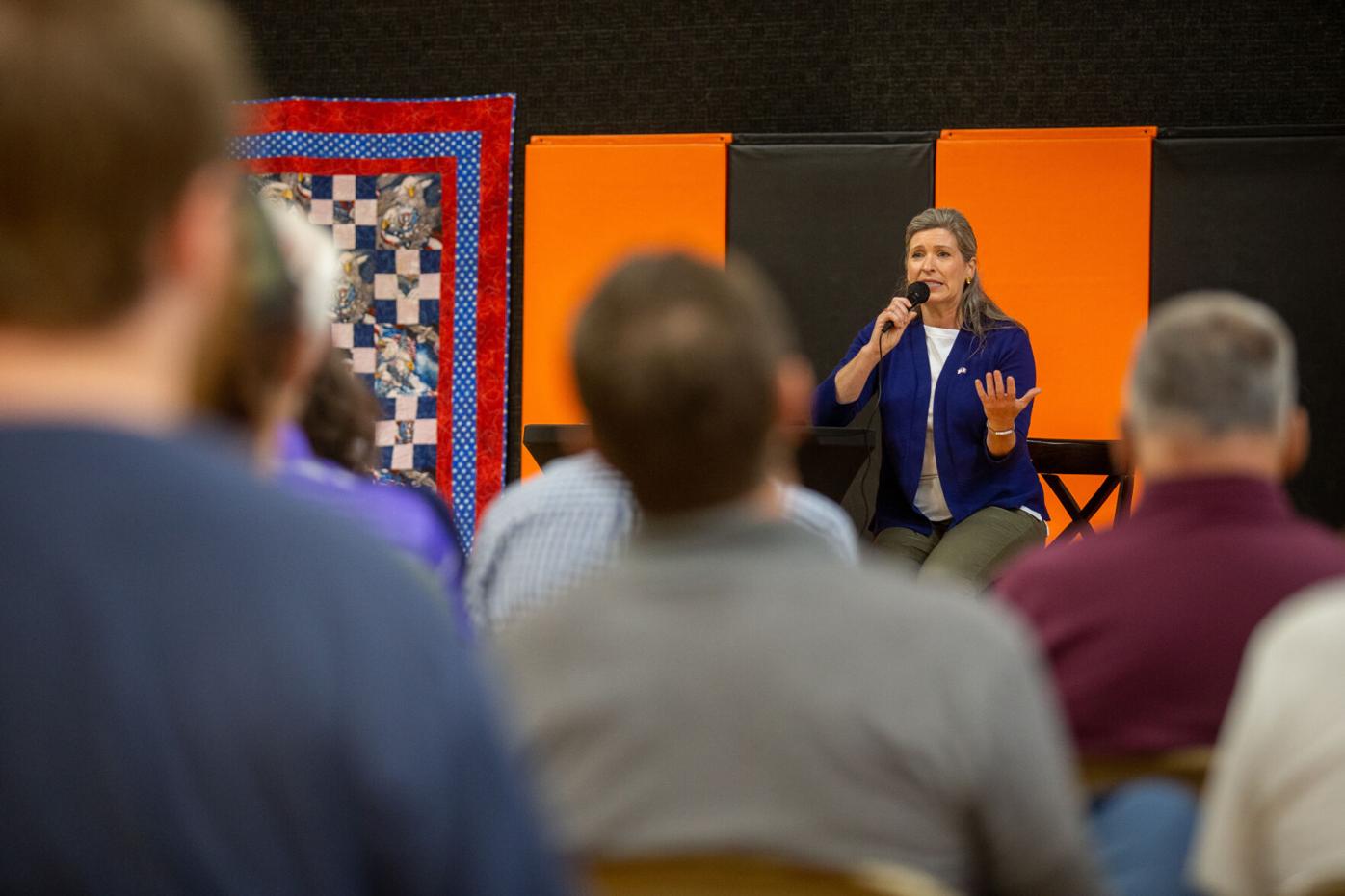 Sen. Joni Ernst, R-IA, hosts a townhall forum on Saturday in Van Buren County at Scheuermann’s Gymnasium in rural Keosauqua during a stop on her 99-county tour.

Sen. Joni Ernst, R-IA, hosts a townhall forum on Saturday in Van Buren County at Scheuermann’s Gymnasium in rural Keosauqua during a stop on her 99-county tour.

BLOOMFIELD — Back in the day, Iowa was one of the nation's top coal mining states. The last one closed in the '90s, but the abandoned mines are scattered about the state.

That's where the Iowa Department of Agriculture and Land Stewardship comes in. Since the 1980s, they have been working to reclaim those abandoned mines with the goal of mitigating hazards, and returning the land to some kind of usefulness.

Sen. Joni Ernst visited one of those sites north of Bloomfield Saturday. The site is one of about 115 sites that utilizes federal funding from the Surface Mining Control and Reclamation Act to reclaim.

The projects require landowner cooperation with the government. Some sites can turn into hayfields, while others are just safer with some vegetation for pollinators.

The state estimates there's still about 160 sites left to reclaim — some around 15 acres, others more than 100 acres.

Supporters of the specific project known as the Brian Wilson Mine north of Bloomfield, as well as other projects and from other counties, joined representatives from the Iowa Department of Agriculture and Land Stewardship in pushing for a renewal of federal funding.

The Surface Mining Control and Reclamation Act sunsets this year. It's been included in many proposals related to the infrastructure bill talks.

Ernst said she supports the advancement of a bipartisan infrastructure bill, but wants to make sure the money is spent on real infrastructure.

"I do think there is a path forward, we just have to see what the bill is," Ernst said. "Now, the Democrats are talking about a much larger tax and spend bill to the tune of probably close to $4 trillion, which is not focused on traditional infrastructure, like what you might see here today. And that one, I'm opposed to raising taxes on our hard-working families. It is a very, very different bill.

"But I do think our roads, our bridges, actual infrastructure, I think we can see that get over get over the bump."

The first question asked about the Jan. 6 investigation, which Ernst said the country needs to understand.

"What we have to do is figure that out and try to prevent this from ever happening again," Ernst said.

But, she said the process can not be a partisan one. She signaled support for a 9/11 style commission. Ernst said the proposal by House Speaker Nancy Pelosi, a California Democrat, had given a 50-50 split between Republicans and Democrats seated on the committee, but left Democrats the only party to appoint staff members to conduct the investigation.

A retired Air Force Veteran asked about how to stop the politicization of the military.

"There's a lot of politics coming from both directions in our military right now," Ernst said. "Both sides have used the military as props or propaganda through the years, and that certainly does not help the men and women that serve in our great United States armed services."

Ernst said politicians need to stop use the military as props.

"We saw what happened on Jan. 6 and the follow up with all the guardsmen that were brought into Washington, D.C.," Ernst said. "And I felt that one way or another, both sides were using them as, 'Oh, look at what happened this is Trump's fault,' or 'This is Nancy Pelosi's fault because she didn't protect the Capitol.'"