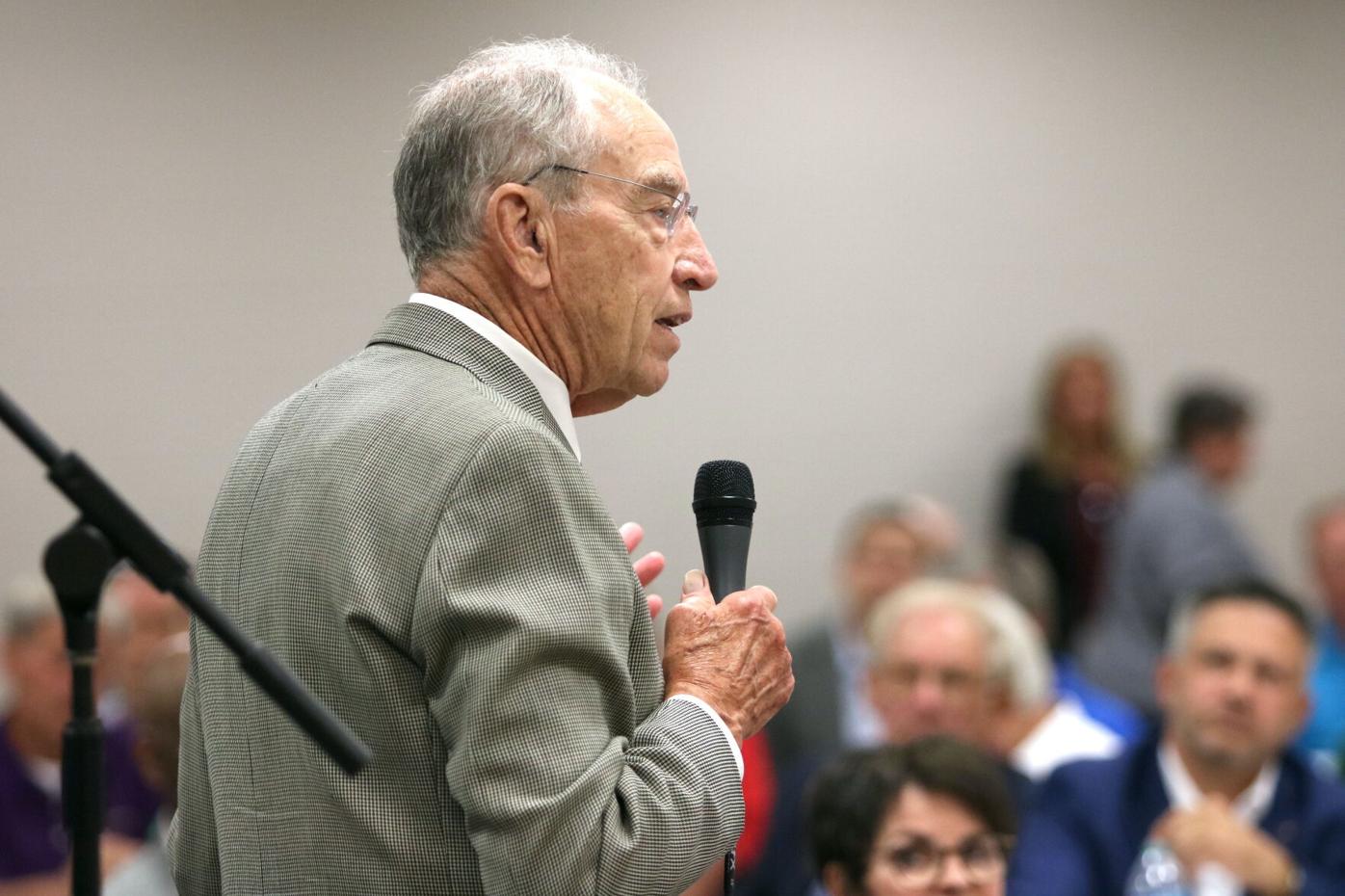 Sen. Chuck Grassley speaks to the crowd during Thursday's Republican Party of Iowa gathering at Bridge View Center in Ottumwa. Grassley is undecided if he will seek an eighth term for the U.S. Senate, as he's up for re-election in 2022. 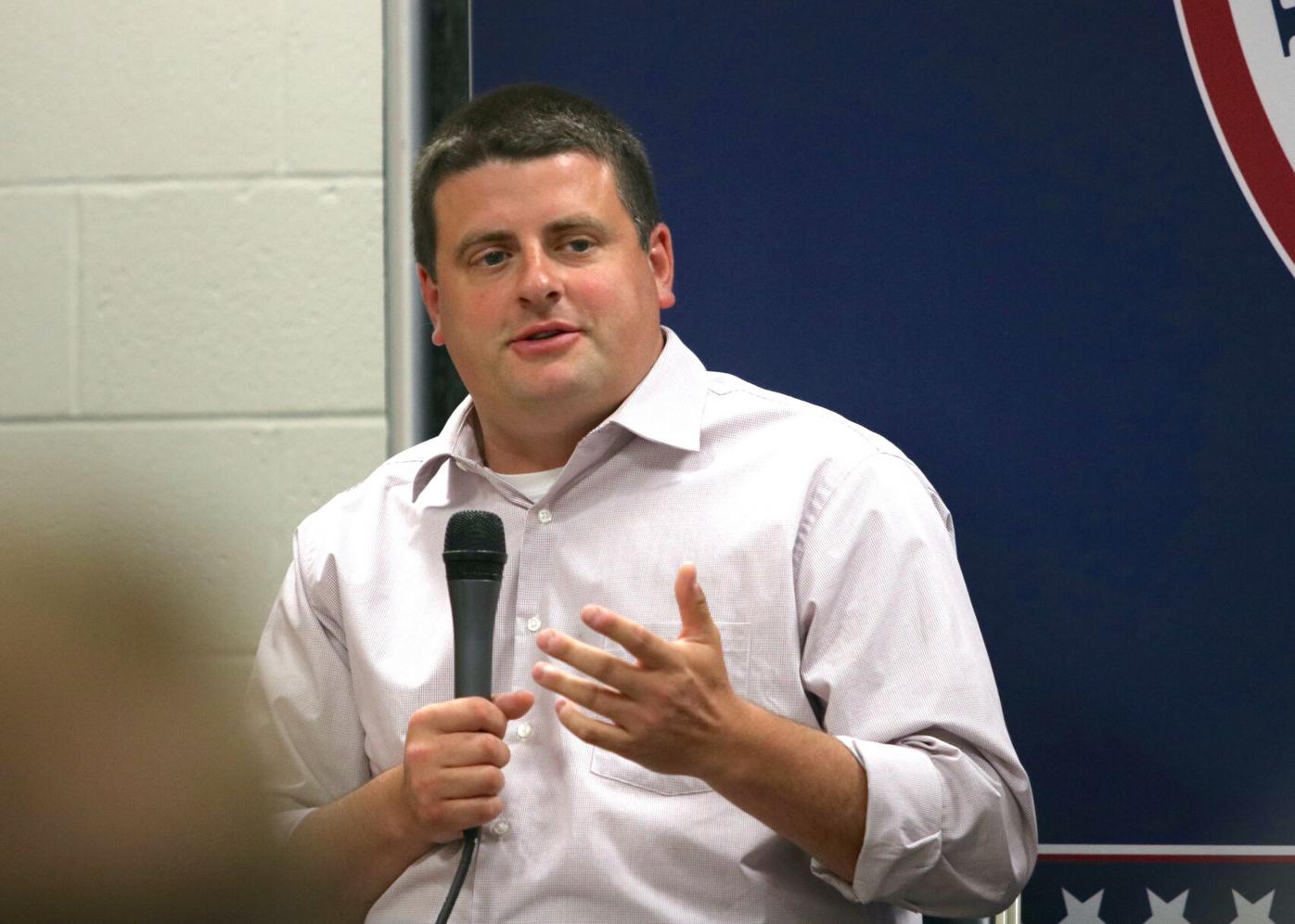 Sen. Chuck Grassley speaks to the crowd during Thursday's Republican Party of Iowa gathering at Bridge View Center in Ottumwa. Grassley is undecided if he will seek an eighth term for the U.S. Senate, as he's up for re-election in 2022.

OTTUMWA — Pat Grassley's seat could be safe. His grandfather's? Well, that depends on what he decides.

Neither is taking anything for granted.

The Grassleys were part of an array of speakers during Thursday's Republican Party of Iowa gathering at Bridge View Center. There politicians spoke about the need to maintain their majority at the state level, and recapture it at the federal level, in the 2022 midterm elections.

Historically, the party opposite the presidency gains seats in the midterms and some seats could be for the taking in a narrowly divided U.S. House and in a U.S. Senate split 50-50. Sen. Chuck Grassley, 87, has not yet decided if he will run for an eighth term, though he is up for re-election next year.

"The average change over a party of the president in the House is about 27 seats. We need five of those 27," he said. "And I hope we can get the Senate back. There are polls showing Democratic programs not being liked by the American people, but that's today. That's not November next year."

Sen. Grassley is hoping a filibuster-proof bill can be passed to cap the yearly increases in pharmaceutical drugs, and he also hopes for a bipartisan agreement giving farmers a more fair market price for their livestock.

The senator also spoke of the immigration issues at the southern border, saying Vice President Kamala Harris wants "to get to the root causes, which are in Honduras, Guatemala and other countries."

"The root cause of it is in the White House," said the senator, who was visiting his 85th county out of the state's 99. "Another problem we have to curb by getting a Republican majority in the House and Senate is to make sure we don't fan the fires of inflation. And just like throwing gasoline on the fires of inflation, the Democrats want to proceed with $6 trillion. We can't stand by and let that happen."

Pat Grassley, the Iowa House Speaker, has an impressive majority in his chamber (59-41) and the Iowa Senate also is in solidly Republican hands (32-18) as part of the party's governing trifecta in the state. Convincing majorities helped the Republicans pass more than 150 bills during this legislative session, but he warned about complacency.

"Where most of my frustration comes anymore is the level of derangement that the Democrats have right now," he said. "They don't realize this is a citizen Legislature, that we do what we do because we want to lead Iowa down the right path."

On the issue of the Legislature's action on voting rights, Pat Grassley was proud of the bill the Legislature passed, calling it "easier to vote, harder to cheat." Among the provisions of the bill to defend against voter fraud were shortening the time of absentee voting by nine days and closing polls an hour earlier.

He cited that election margins in states like Georgia were so close was because "they were sending all these ballots out to everyone."

"Iowa has been on the cutting edge of making sure that we have secure elections," he said. "We're doing the right things in this state, and that's a huge deal."

The speaker also noted that only five Republicans in the Iowa House have served in the minority, proving "Republicans have been extremely successful." Still, he's not about to take it for granted.

"Having 59 members put a lot of pressure on us in our upcoming election cycle," he said. "You have more seats, you have more to defend. There were days I wasn't convinced that the outcome was going to be the way I wanted, but we all came together.

"So the nice thing is we've dispirited them (the Democrats), they're broken, and they continue to elect new leaders," he said. "To be honest, as speaker, I probably get the least amount of things I want, but my job is to make sure everybody in that room get what they want for their districts."

Pat Grassley said in the last election cycle the Republicans went "on the offensive" to increase their majority, and will have to do it again.

"We're going to have more seats to defend than we've had in a long, long time," he said. "The Democrats have New York and California and there is a lot of money burning holes in liberals' pockets to overturn our Republican majority.

"We don't agree on every single issue, but we don't try to just run somebody out because they disagree with us on one or two things," he said. "It takes all of us working together."