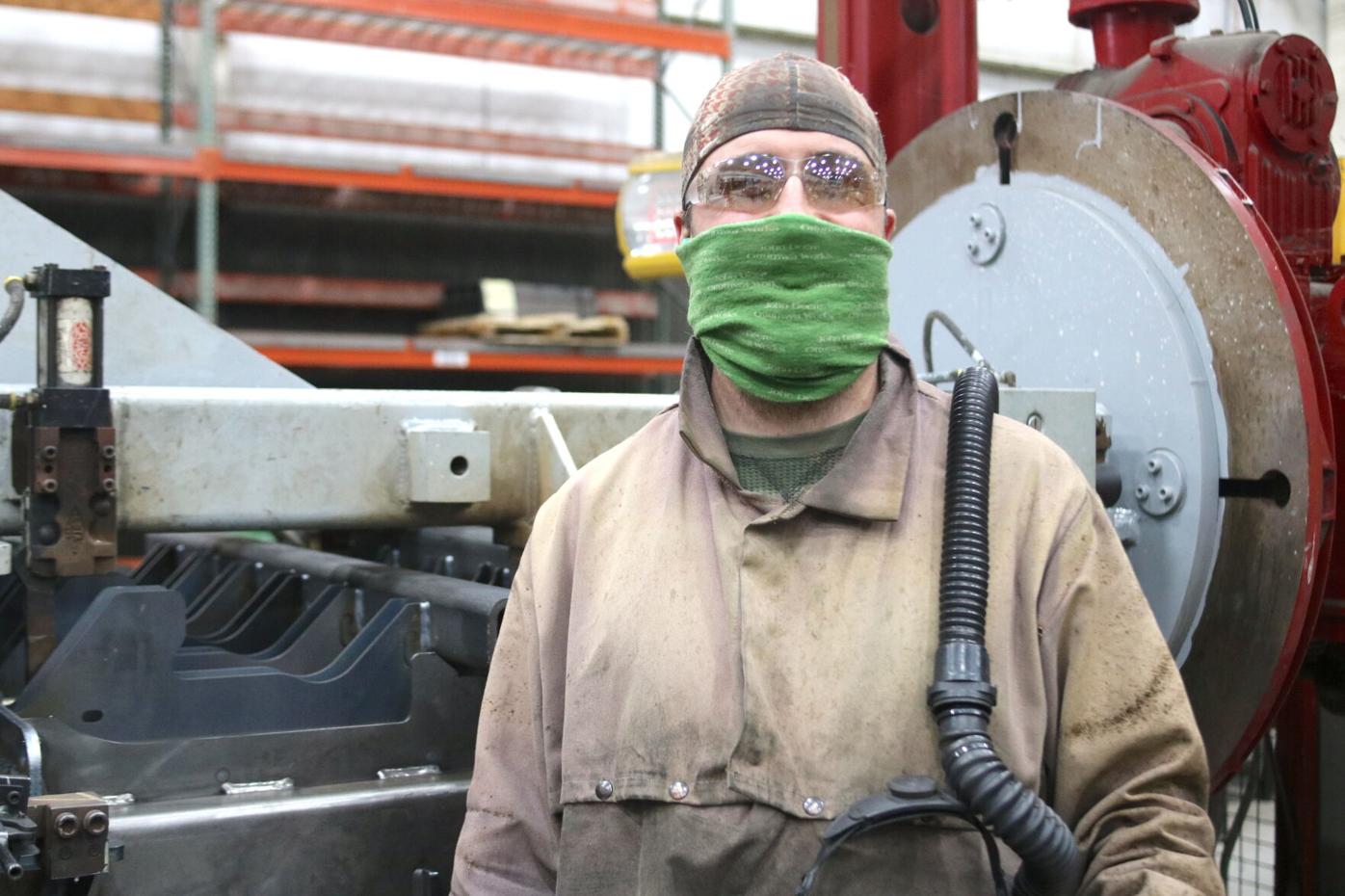 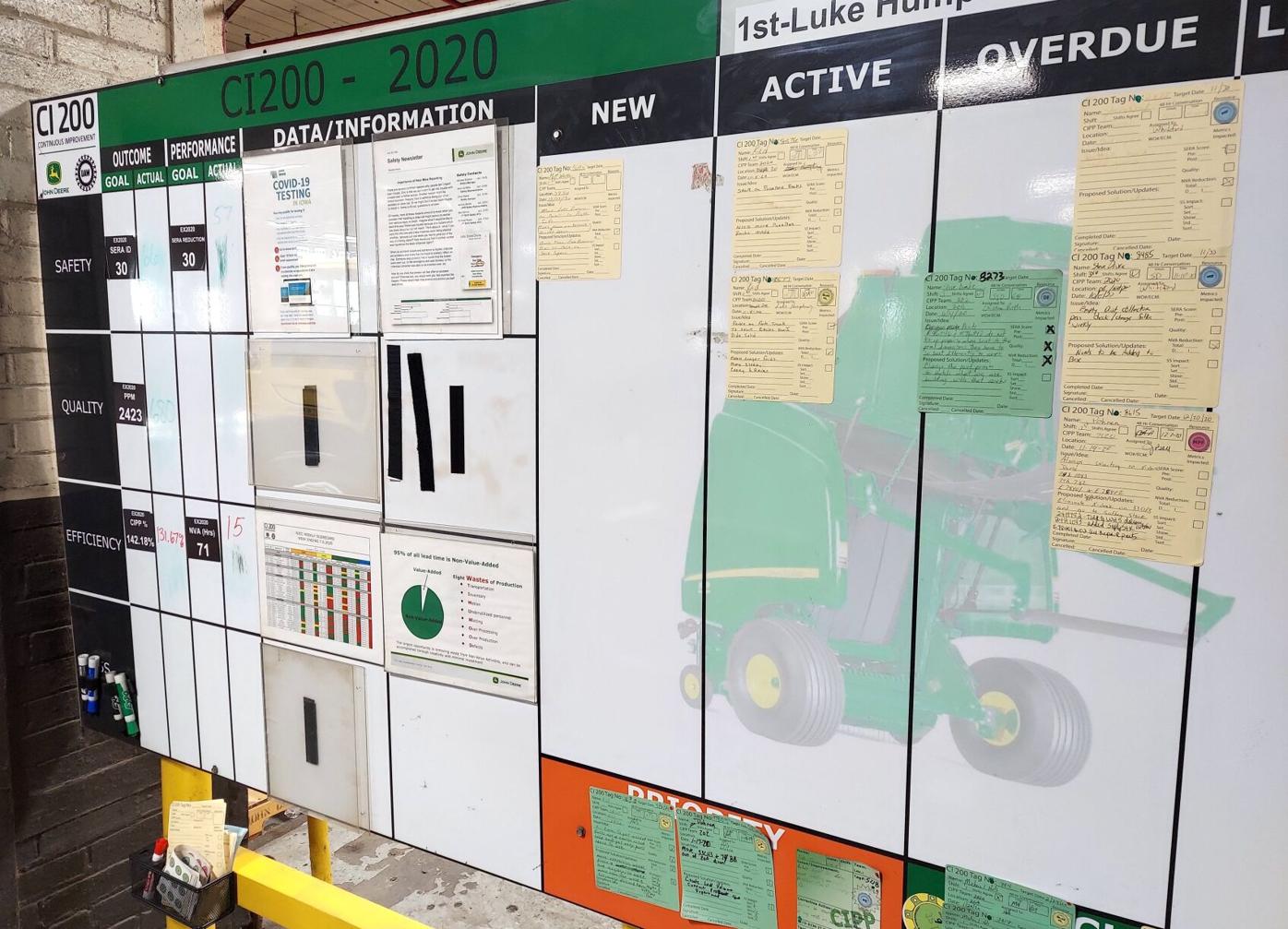 One of the Continuous Improvement boards at John Deere Works in Ottumwa. On the board, employees propose solutions to improve the safety, efficiency and quality of their jobs, and the ideas work through stages until potential completion of the project.

One of the Continuous Improvement boards at John Deere Works in Ottumwa. On the board, employees propose solutions to improve the safety, efficiency and quality of their jobs, and the ideas work through stages until potential completion of the project.

But he believes it, because it's the backbone of the Continuous Improvement Program at John Deere Ottumwa Works.

John Deere and the UAW partnered more than 20 years ago to develop Continuous Improvement to give their employees a bigger voice in promoting solutions for safety, quality and efficiency in the workplace, while also putting money back in the pockets of employees.

"My grandfather worked here and retired out of here in the '70s, so the hard work he left has now given me a job as his grandson," said Reber, a welder and fork truck driver in the Ottumwa factory. "So that thinking of always investing, to always do better and achieve better. That's our heartbeat."

Reber said he's worked for Deere for 13 years and has proposed 20 to 25 different project ideas to improve performance or safety. Essentially, the process of starting with an idea and ending with completion is straight-forward:

• An employee develops an idea, from something mundane as a step-stool to reach tools better, or a push cart that is more balanced, to much bigger projects that can take years and require plenty of capital. The ideas are then posted to a CI board in each department.

• Once posted, a supervisor or other resource will approach the innovator to discuss the idea and work to figure a solution.

• The supervisor or resource explores, tests and, if practical, works with employees to implement a solution.

• The supervisor then presents the solution to the employee who originated the idea.

The program is a big perk for working with the company, which was recognized as one of the "Best Workplaces for Innovators" for 2020 by "Fast Company" magazine last July. Deere and the UAW process more than 20,000 projects annually across all locations.

"The CI process is just great. We're always getting better and looking to the future so we can bring more work in," Reber said. "If work is better, then our life is better outside of work. They're always really invested in what we need to get better. So we're always coming up with new ways, and there is a relationship with the workers."

Billy Weinhold, who is the shop chairman for UAW Local 74, said employees earn more when efficiency can be attained, and with that comes a sense of accomplishment.

"I think it does boost the morale on the floor that they can better the process or better the safety and efficiency, and that those wages will be there," he said. "It's a chance to put their ideas forward. Who better knows the floor than the people who are working on it?

"So basically they have a standard. So something that used to take me 10 minutes I can do in 7 minutes," he said. "I've saved three minutes and saved a significant amount of time throughout the day. With that, I'm able to produce more parts. If my output goes up and my input is the same, I'm going to get paid better that way."

Chris O'Sullivan is the CI coordinator for the plant and said employees may not understand the process at first, but it doesn't take long. He said it's important to the company to have "a fresh set of eyes" on a process.

"We do see quite a bit of participation. Maybe not the first day, but once they figure out what they're doing and where they are, they definitely have a fresh perspective," said O'Sullivan, who said the plant received 1,170 project ideas last year, about five per working day. "Someone might get complacent, but if you get a fresh set of eyes, someone will say, 'Why are we doing it this way and not this way?' They can come up with some great improvement ideas, or see things from previous employers and utilize that knowledge."

Mary Loyd is the UAW's CI coordinator, or "coach" of the process. Her task is to essentially oversee the projects and be a liaison between the employees on the floor and the supervisors or resources.

"The whole system is built on continuous improvement," she said. "So you're building on each other's ideas. What we do see quite a bit, where safety is concerned, maybe someone 6-foot tall may be in an area that suits them, and then someone 5 feet tall comes in and it doesn't work for them. We have to investigate to make sure something doesn't negatively impact a different group.

"Anytime you can give an employee a voice and give them ownership of the part they play in a business, it's a positive thing," she said.

Weinhold added: "It's not to make it worse for one person or another. It's to make it better for all."

Even though several ideas for improvement are introduced, not all of them are completed. There are many different parts to the process, but that doesn't make them "bad" ideas, said labor relations manager Mark Czerwinski.

"We really do have projects from creation to completion that are days long, and some that take several years. Some of that depends on the financial investment of the project," he said. "Simply if it's an expensive project, it doesn't mean it's a no. It may just mean we need to plan for that expense to complete it. That's part of what may take it longer to complete.

"There are some we can't meet, but the intent is to have the avenue to communicate their ideas, and then the accountability to respond," Czerwinski said. "If there is an idea we can't support, it still requires having that conversation to make sure they understand why we can't."

And the conversation may be the most important piece. The 48-hour conversation wasn't initially part of the program, but has possibly been the most critical part since it became a requirement two years ago.

"One of the struggles we had was the timing in which employees got responses to their ideas, and what we found was the longer it took, the fewer ideas we were getting," Czerwinski said.

Always, Reber said, employees are not just looking at their current situation, but for those who come behind them.