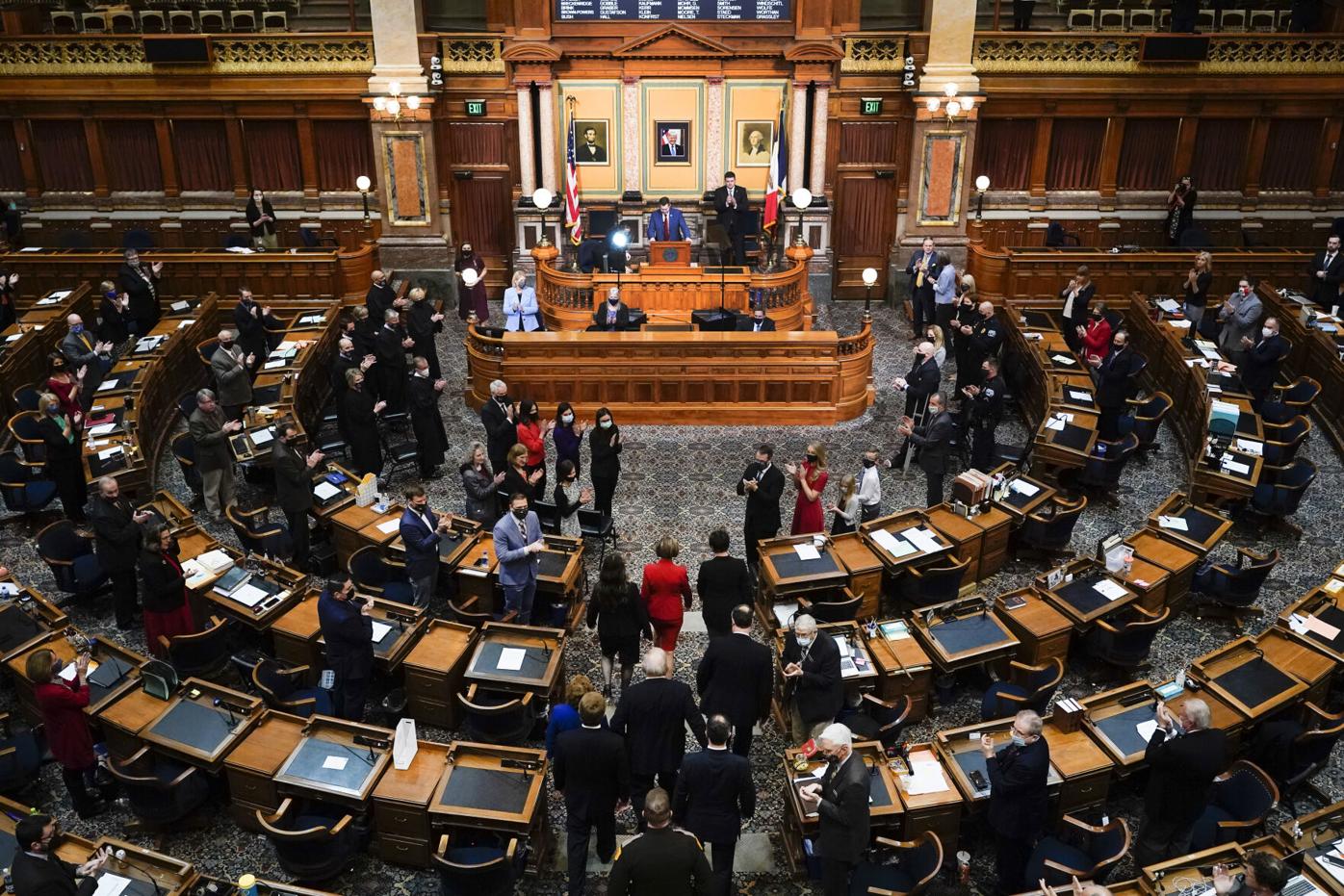 Iowa Gov. Kim Reynolds arrives to deliver her Condition of the State address before a joint session of the Iowa Legislature on Tuesday at the Statehouse in Des Moines.

Iowa Gov. Kim Reynolds delivers her Condition of the State address before a joint session of the Iowa Legislature.

Iowa Gov. Kim Reynolds arrives to deliver her Condition of the State address before a joint session of the Iowa Legislature on Tuesday at the Statehouse in Des Moines.

Iowa Gov. Kim Reynolds delivers her Condition of the State address before a joint session of the Iowa Legislature.

While the minority Democratic party leaders agree with those priorities, they drew their attention to Reynolds' calls to solidify more tax cuts.

Senate Democratic Leader Zach Wahls, of Coralville, said he was stunned "to learn of the governor's top proposal for the economy being another tax cut for the rich and wealthy."

Reynolds is proposing to remove revenue hurdles to force the full implementation of the state's largest-ever tax cut, signed into law in 2018.

The policy proposal made up just 76 words of her more than 4,500-word speech but would figure to the best most expensive to Iowa taxpayers.

The bill originally called for several tax cuts and reforms not to be put into action sooner than the 2023 tax year, and only if certain revenue conditions were met. Reynolds proposes to implement those changes in 2023, regardless of the state's revenue numbers.

The changes would drop the state's top income tax rate from 8.53% to 6.5% for individuals earning more than $75,001, and halves the number of tax brackets in the code through consolidation. The original law required that the state bring in $8.3 billion and see a 4% revenue increase in that fiscal year before those changes would take effect.

Wahls said while it'll be three fiscal years before the state budget feels it, the tax cuts would have negative impacts.

"If this was talking about giving working-class Iowans a tax cut to help essential workers and other folks who have borne the brunt of this crisis, that would be one thing," he said. "The reality is the triggers aren't going to start taking effect for another three fiscal years. But when they do take effect, the impact will be staggering."

Reynolds said Iowa could sustain those cuts because it has weathered the COVID-19 storm much better than other states. "We aren't looking at tough budget cuts," Reynolds said, "and we're certainly not looking at raising taxes."

But Wahls was not convinced. He said the impact of removing those triggers will cost the state around $100 million the first year, $340 million the second year and rise significantly from there.

In her annual address to the Legislature, proposals from Reynolds are just that; Legislators must still adopt them.

Todd Prichard, a Charles City Democrat that's the party's State House leader, said he supported Reynolds' large investment of $450 million toward rural broadband between now and 2025, but wondered how the state could afford it.

Democrats also agreed investments in child care were needed in the state. Reynolds said Tuesday the state has lost one-third of its child care spots the last five years, despite having more households with all parents working than any other state.

She proposed $3 million to jump-start public-private partnerships and another $25 million of child care development grants to promote startups.

"We certainly can all agree that we're at a crisis point for child care in the state of Iowa, and it needs to be addressed urgently," said Jennifer Konfrst, a Windsor Heights Democrat that's the party's whip in the statehouse.

Prichard, a former prosecutor, said there can be "a win for everybody" when it comes to reforms of law enforcement.

"She acknowledged tonight that previous investments in broadband from Republicans in this state have been small steps, and I think that's correct," Wahls said. "Taking a big step forward is overdue, but it has a big impact on everything from schools, to work, to telehealth. I think those are all going to be really key things."

Reynolds also outlined a $1 million line item in her proposed budget to create the Center of Excellence, a program to align rural physicians with specialists, "creating regional hubs to provide highly-skilled care closer to where patients and their primary-care providers live," she said.

The ability for Democrats to influence policies will be limited this year as they face steep Republican majorities in state government.

Republicans have a 59-41 majority in the Iowa House, gaining six seats in the 2020 election.

In the State Senate, Republicans kept their majority in the 2020 election but started the session with a 31-18 majority. That chamber is awaiting the results of a special election in Senate District 41 after Ottumwa Republican Mariannette Miller-Meeks resigned to be seated in the U.S. House as Iowa's second congressional district representative.