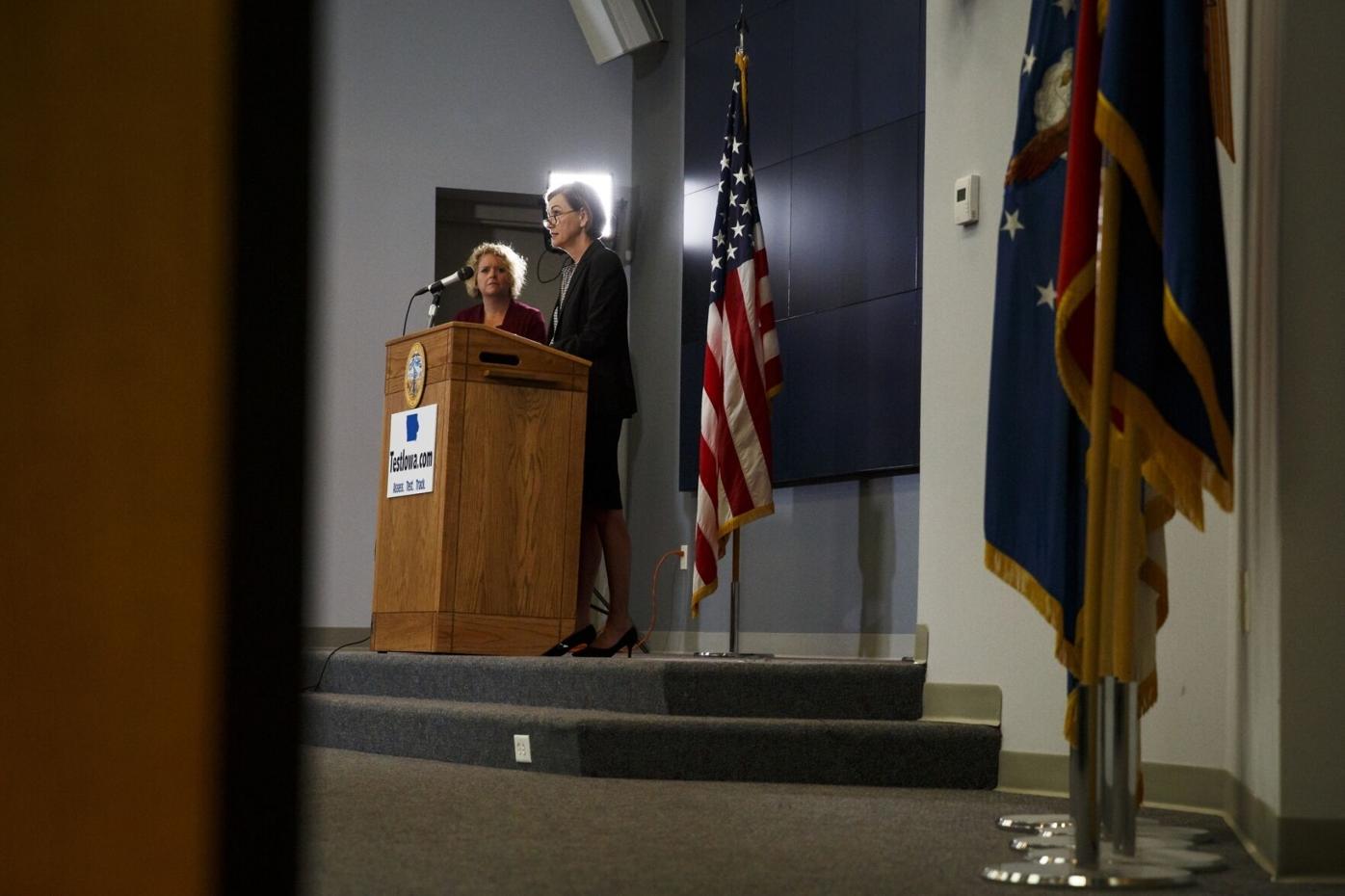 Iowa Governor Kim Reynolds speaks during her daily COVID-19 press conference at the Emergency Operations Center on May 27, 2020 in Johnston. 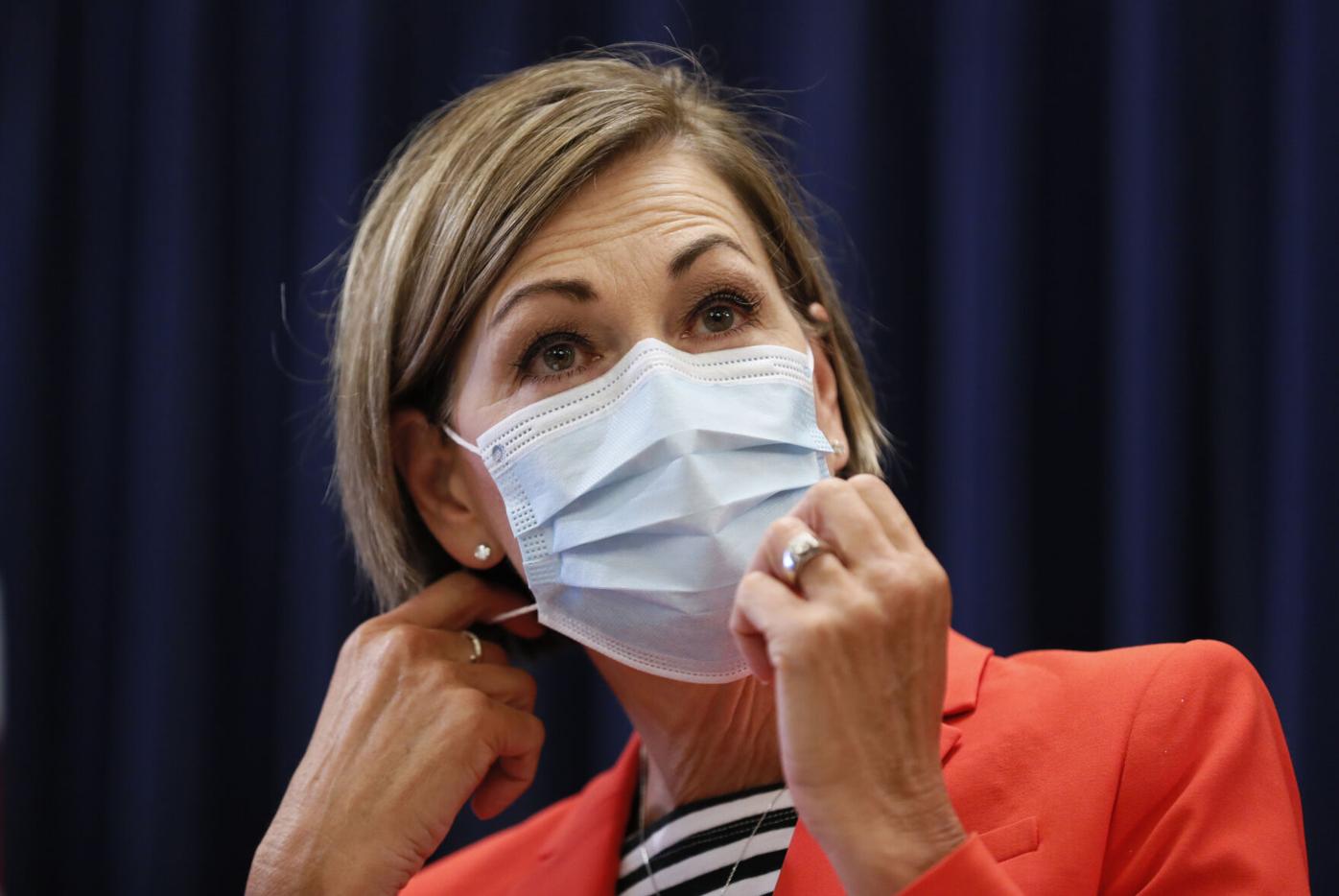 Iowa Gov. Kim Reynolds removes her face mask before speaking at a news conference on the state’s guidance for returning to school in response to the coronavirus outbreak on Thursday in Des Moines.

Iowa Governor Kim Reynolds speaks during her daily COVID-19 press conference at the Emergency Operations Center on May 27, 2020 in Johnston.

Iowa Gov. Kim Reynolds removes her face mask before speaking at a news conference on the state’s guidance for returning to school in response to the coronavirus outbreak on Thursday in Des Moines.

Is it safe to go to the store? Do masks prevent spread of the virus? Should my kids go to school in the fall?

At a time when Iowans need accurate and complete information, some state agencies, including the Governor’s Office, are ignoring questions from reporters, refusing to do interviews and stalling on public records requests — sometimes for months, Iowa journalists said.

“I’ve heard from newspapers and TV stations that are at the end of their rope,” said Randy Evans, executive director of the Iowa Freedom of Information Council. State agencies are “facing legitimate concerns about coronavirus, but they are seemingly using it as a means of deflecting public records requests.”

Without critical pieces of information, residents may not fully understand changing public health recommendations and lose trust in public officials, said Gunita Singh, the Jack Nelson/Dow Jones Foundation legal fellow at the Reporters Committee for Freedom of the Press.

“Open government isn’t just a nice idea, it’s a cornerstone for an informed citizenry,” Singh said. “We see reporters going above and beyond, but we aren’t seeing government bodies across the board facilitating access to the information.”

Since March, Iowans have been deprived of information in the following ways:

• The Iowa Department of Public Health initially would not release data on hospitalization of COVID-19 patients, which KCRG-TV9 in Cedar Rapids requested in early April, KCRG News Director Adam Carros said. Ultimately, KCRG had an attorney issue a demand letter to get the numbers made public in mid-May.

• Gov. Kim Reynolds’ staff would not answer the Centerville Iowegian’s questions about why an April 2 Seymour horse auction involving hundreds of people was allowed, even after Reynolds on March 26 had issued an emergency declaration banning gatherings of more than 10 people.

Editor Kyle Ocker or his staff tried to ask the question during then-daily press briefings.

“I have dialed in two to three times, one time up to 15 to 20 minutes early, and never got a question,” Ocker said. “The questions were never addressed by other media during the calls.”

• It took the Governor’s Office 142 days — more than one-third of a year — to fulfill a records request The Gazette filed March 3 to find out about communications between Jake Ketzner, the governor’s former chief of staff, and state officials over a $50 million cloud computing contract with Workday, which hired Ketzner in 2018.

When the office finally fulfilled the request July 24, it sad there was one responsive email.

• Reynolds has so far declined to do an interview with Brianne Pfannenstiel, the Des Moines Register’s political reporter, about what it’s like to lead the state through a pandemic.

“I’ve suggested a short phone interview. I’ve pledged to drive to meet her wherever she is. I’ve said I’ll make myself available whenever she can squeeze me in — even if it’s off hours on a night or a weekend. But I’ve been given every variation of ‘we see the value in this interview but she’s just so busy right now,’” Pfannenstiel said. But “she has managed to make time for conservative radio and KCCI, though.”

• The Iowa Department of Education has said no to repeated requests from the Iowa Center for Public Affairs Journalism, or IowaWatch, for an interview with Ann Lebo to talk about COVID-related issues, including how rural school districts were going to serve students with limited internet connectivity.

• The Governor’s Office has not responded to a Register request for an audio recording or transcript of a call between Reynolds, Nebraska Gov. Pete Ricketts and Dr. Anthony Fauci, director of the National Institute of Allergy and Infectious Diseases and a COVID-19 adviser to President Donald Trump.

Reynolds tweeted about the call April 6, saying Fauci was “100% supportive, saying IA and NE ‘were on the same page’ with guidance he’s providing other states.”

“But I also think it’s possible the conversation involved important context that may be valuable for the public’s ongoing assessment of how to save human life,” he said. “By thumbing her nose at record requests, the governor dodges accountability to the people she represents.”

Pat Garrett, Reynolds’ spokesman, said he believes his office had provided answers to many of these requests.

“Governor Reynolds and her administration has given an unprecedented level of access to the media and the public throughout the COVID19 pandemic,” he said in an email.

“Whether it’s through daily press conferences, regular media availabilities, and hourly responses to media inquiries, we strive to be transparent. While there’s no way to immediately satisfy everyone’s request, the governor, her cabinet, and the entire team will continue to be as accessible as possible while combating the COVID19 pandemic.”

Iowa isn’t the only state where reporters are struggling to get public information during the pandemic.

Since March, officials in 31 states and the District of Columbia have modified Freedom of Information Act laws or warned requesters to expect delays or lack of response, according to a review by the Reporters Committee for Freedom of the Press, a Washington, D.C., group that provides legal resources to protect First Amendment freedoms and newsgathering rights of journalists.

San Francisco Mayor London Breed in a March 13 declaration proclaimed two parts of the city’s administrative code requiring agencies to respond to immediate disclosure requests in a timely manner had been “suspended for the duration” of the coronavirus emergency,” the Reporters Committee found.

Chicago Public Schools said the COVID-19 pandemic “may result in responses to FOIA requests being significantly delayed or impaired.”

The Student Press Law Center, a Washington, D.C., not-for-profit that promotes and defends free speech rights of high school and college journalists, reported May 21 that “COVID-19 has created real challenges for record holders, and a convenient excuse for schools looking to stonewall journalists.”

In Iowa, Reynolds has temporarily suspended the requirement that public meetings or hearings be held in person, as long as the public can participate remotely.

There have been no formal changes to Iowa Code Chapter 22, which provides access to public records.

Chapter 22 requires government bodies to provide access to public records as soon as possible. Agencies are granted a “good-faith, reasonable delay” if they are trying to determine if the record requested is indeed public or if they are filing an injunction to stop release of the record.

One part of the law says a reasonable delay for determining whether a record should be open for inspection should not “exceed 20 calendar days and ordinarily should not exceed 10 business days.”

Some state agencies, especially the Iowa Department of Public Health, are funneling information requests through the Governor’s Office, which creates a bottleneck. And because the governor isn’t subject to oversight from the Iowa Public Information Board, reporters have no recourse when requests are ignored — other than hiring attorneys.

“It removes a low-cost means of getting a resolution,” Evans said.

The Public Health Department, which has been a focus of many COVID information requests since March, earlier this month fired its longtime spokeswoman, Polly Carver-Kimm.

She told Register reporter Tony Leys it was because her bosses thought she shared too much information with reporters.

When Iowa Capital Dispatch reporter Clark Kauffman asked for emails between Dr. Caitlin Pedati, the state medical director, and the Centers for Disease Control and Prevention regarding COVID-19 outbreaks at meat-processing plants, the department asked him to pay nearly $10,000.

When The Gazette followed up on a week-old request asking why Test Iowa had stopped sending health surveys to thousands of Iowans, Garrett said July 24 he had missed the previous email forwarded to him from Public Health.

He provided the answer July 24 (surveys stop after seven weeks if survey takers report no symptoms) but the delay points out the challenges of one office overseeing hundreds of requests — some of which could be handled by others.

Iowa Department of Human Services Director Kelly Garcia, who this weekend also becomes the new director of Public Health Department, has indicated plans to focus on transparency and communication within the department.

Some state agencies across the country have proved a pandemic doesn’t have to hinder the public’s access to information, Singh said.

The Minnesota Department of Administration issued a statement in March reminding agencies of their obligations to respond to public records requests in an emergency.

“Entity responses must be prompt and appropriate, and within a reasonable amount of time. The reasonable and appropriate standards are flexible enough to accommodate changes in circumstances due to the current emergency. However, data request response times for data subjects remain 10 business days. ... Entities might also consider waiving copy fees at this time when they deem appropriate.”

The Vermont League of Cities and Towns recommends agencies post records online so they are available to the public even when offices are closed, according to the Reporters Committee’s research.

“One practice we recommend is keeping lines of communications open,” Singh said. Agencies should tell reporters when there will be a delay, but estimate when the information will be available. Journalists should communicate more about their deadlines, she said.

“I don’t think the argument ‘we need to be making these sweeping changes’ carries any weight,” she said. “We are seeing examples of jurisdictions that are easily balancing the need to stay safe and also to provide the free flow of information.”

This story was originally published by the Cedar Rapids Gazette, and was reprinted with permission.