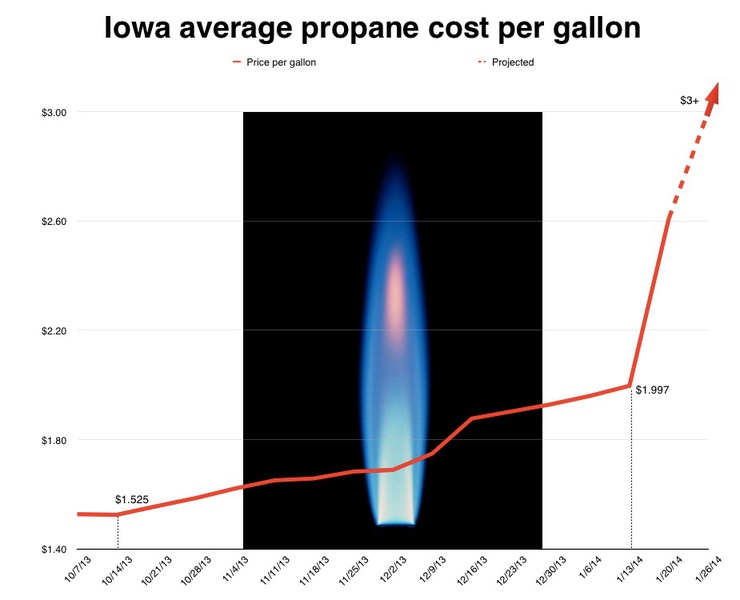 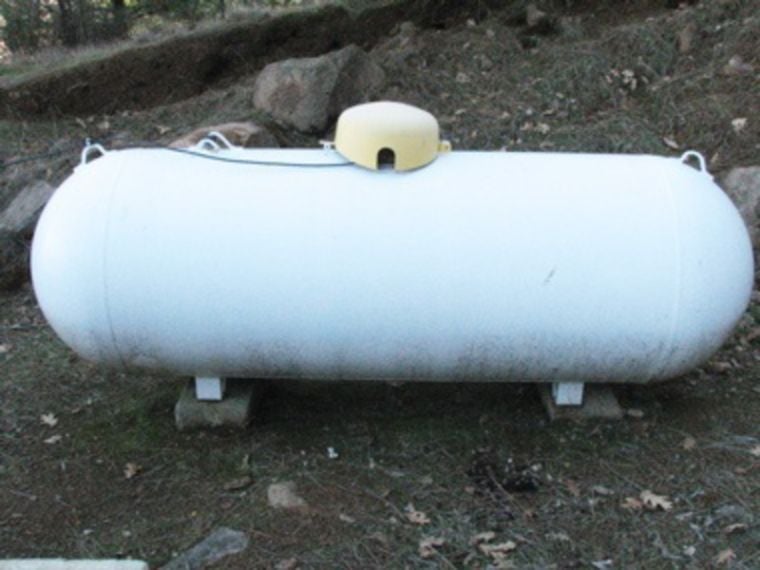 OTTUMWA — You know it’s a bad sign when the state comes out with a press release with a dire warning one day and it has been surpassed within 48 hours.

Propane prices are spiking at what Iowa officials have called an “unprecedented” pace. Prices in October were about $1.52 per gallon. It was up to $1.99 by mid-January.

It’s over $4 per gallon now and is still rising.

The massive jump in prices is being blamed on supply issues related to getting the propane to the Midwest. There are questions though about whether it’s really a shortage and, if it is, what is causing it.

Doug Dick, who sells propane locally for Hamilton Produce, doesn’t buy the claim that the situation is entirely due to shipping issues.

“We’re getting ripped off, quite frankly,” he said. “There’s obviously a shortage of supply.”

The issues began well before the spike. Midwestern crops were late after a very wet spring. While Iowa dried out over the summer, adjacent states didn’t. That raised demand for propane to run driers for the crops. One Minnesota supplier told Dick he was running heating supplies all day and propane for agricultural use all night just to keep up.

There was no letup after the fall as Iowa plunged into a cold winter. But Dick sees more at work than just the weather.

“The big thing is we’ve gotten really good at exporting propane in the United States,” he said. Dick thinks that is a major part of the crisis.

For Jerry McKim the spike has been disastrous. He runs the state’s low-income home energy assistance program, better known as LIHEAP. The program still tries to help people, but the price spike has gutted its buying power.

“We had a minimum benefit for fuel delivery customers. That was $500,” he said. “At $1.75 per gallon that might have gotten them a fair amount of propane. Now $500 won’t even come close to the minimum delivery amount. Our buying power has been diminished significantly.”

With today’s prices $500 covers only 125 gallons. While it sounds like a lot compared to filling up your car, most companies won’t even make a delivery for that little. McKim said the basic benefit has been boosted to $650 as an emergency measure and the state is working with propane vendors to lower the minimum amount they will deliver. Most are willing to cooperate, but not all.

Compounding the problem is the fact the midwest is facing an unusually harsh winter. Temperatures two weeks ago dropped to levels not seen in nearly 20 years. Daytime highs are running well below normal, even on comparatively warm days.

That means people are using more energy to heat their homes, draining the propane they had delivered early in the season much faster than normal.

Collins said propane use doesn’t have the same measures as the miles per gallon familiar to drivers. There are too many factors involved. The temperature outside, the thermostat inside the house, the size of the house and number of rooms being heated all change how much long a gallon of propane will last for a homeowner.

But it’s clear the association’s clients are being put in very difficult positions.

“Usually we don’t see a big influx of people needing a second fill until February or March,” she said. But one recent day saw requests for help from 13 separate homeowners.

The cold will continue. Forecasters are predicting temperatures to fall below zero again early next week. The National Weather Service says Monday’s high in southeast Iowa could be in the low single digits.

No one knows how long this price spike will last. One of the best hopes may come from Texas, where Gov. Rick Perry and Lt. Gov. David Dewhurst have ordered the temporary waiver of the state’s licensing, permitting and certification requirements for propane transportation.

“After asking Texas officials yesterday for the waiver, I was pleased to learn of their quick action to assist Iowans and Midwest states with the shortage of propane,” said Branstad.

And Sen. Charles Grassley has asked the Federal Trade Commission to review the circumstances that have created the price spike.

“I request that the Federal Trade Commission remain vigilant in overseeing the propane market to prevent possible anti-competitive behavior or illegal manipulation, and to ensure that any supply shortages are not created artificially,” Grassley wrote in a letter to Edith Ramirez, who chairs the FTC.

Those remedies will not have an immediate impact, though. Prices continued to climb Thursday and Friday, putting people who need propane now in a very difficult position.

“There’s a gap between what people can pay and what the household is going to need,” McKim said.

Dick said communication is critical for propane customers in this situation.

“We’re getting enough gas, but we’re having to jump through hoops to get it. We’ve been communicating a lot with customers. I was on the phone until bedtime last night [Thursday],” he said. “We certainly don’t want people to run out.”

Communication about what customers need and what they can pay could help lead to payment structures and other ways of keeping homes heated, Dick said. But that’s not possible unless the suppliers know about the customer’s situation.

“We’re all in this together,” he said, “and we’ll get through it together.”