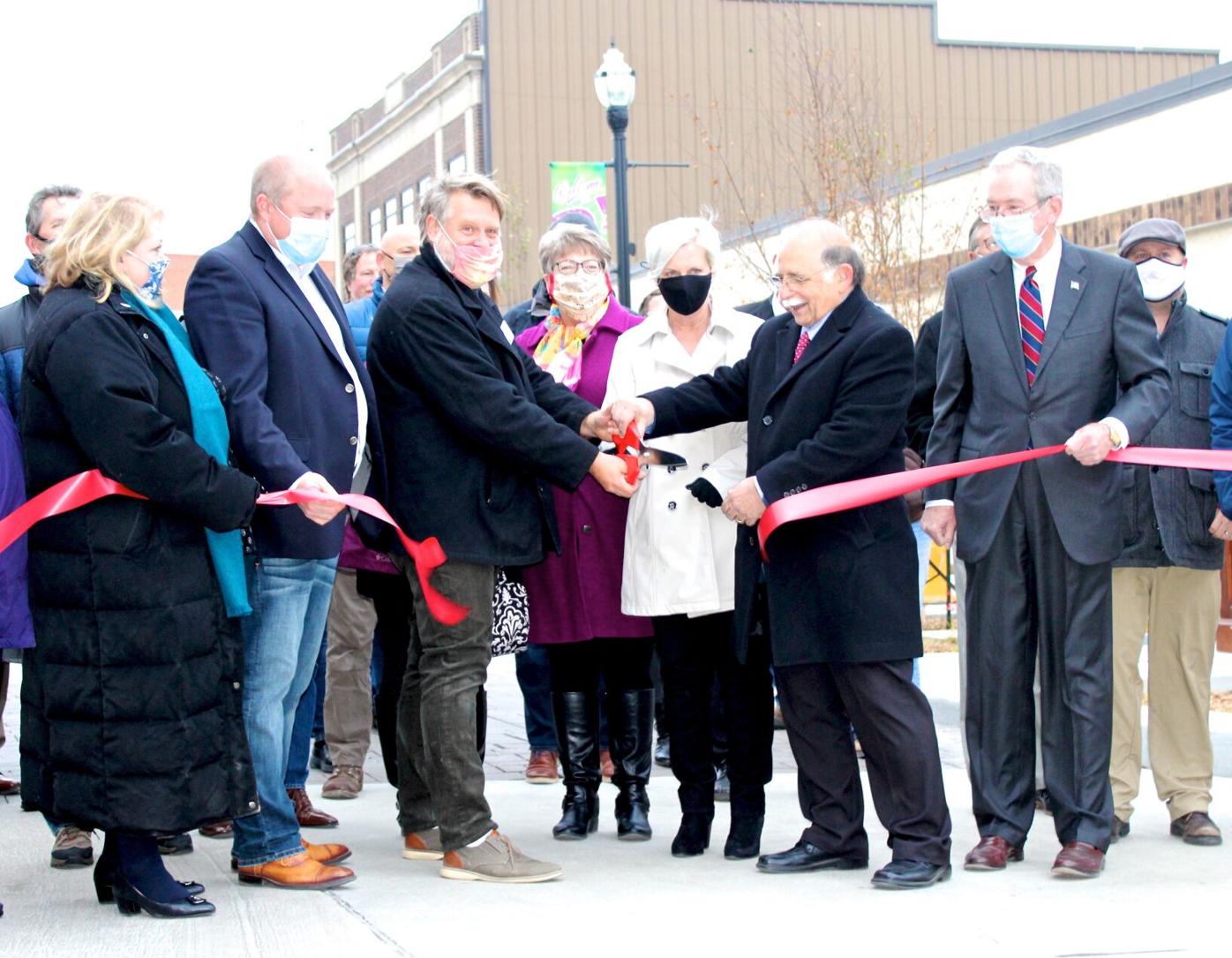 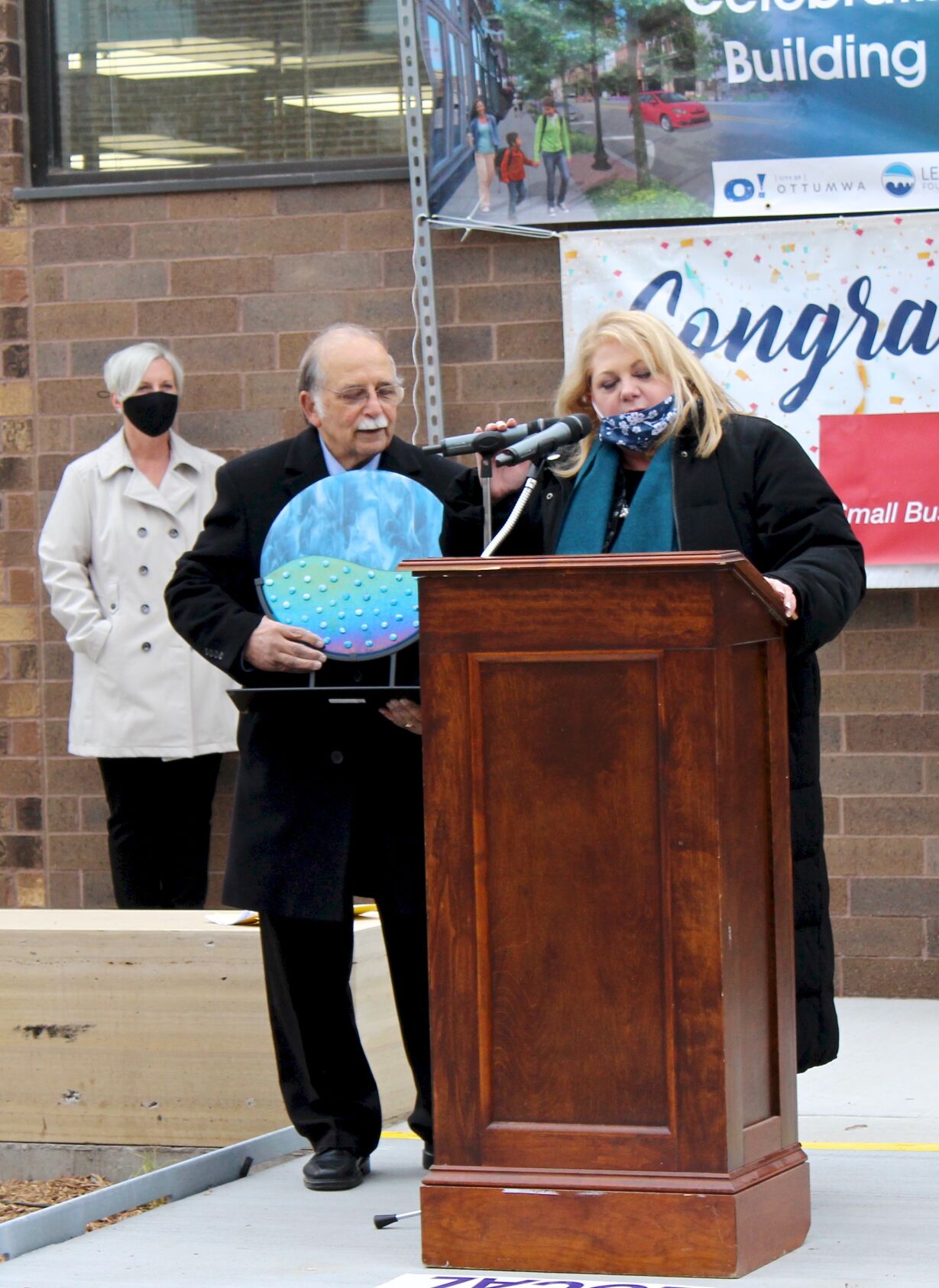 OTTUMWA — Celebration was in the air of downtown Ottumwa Thursday evening.

Not only were people out to celebrate the streetscape project’s completion with a ribbon cutting, but the community was also being recognized with the Small Business Association Iowa Small Business Community of the Year Award.

“I’m thrilled with the small business award, and then you look at the streetscape, where we’re standing, is outstanding,” Mayor Tom Lazio said.

The mayor and Andy Maw, master of ceremonies and executive director of Welcome & Connect Service, commented on what downtown was not that long ago, Lazio when he became mayor and Maw when his family moved to town.

“I was embarrassed to bring people downtown when I was first elected,” Lazio said. Maw said downtown did not seem safe, the one-way streets were inconvenient and the sidewalks were not very walkable.

“Since that time, we have brought downtown Ottumwa back to life,” Maw said. “Ottumwa has a Main Street we should be proud of.”

Lazio said the project showcases the “front porch of the city” with increased safety and lighting, wide, walkable sidewalks and more access for local businesses, with downtown becoming a showcase for the whole state. It also, he said, makes it inviting for new businesses to come in. And that’s where it ties into the award the city was presented with.

“It is really the small business owners who are the heart and soul of the economy,” said Jayne Armstrong, SBA district director while presenting the award. “This has not exactly been a great year for small business, so it’s nice to have something to celebrate.

“If America learned one thing through this pandemic, it’s been awakened to how important small business is to America.”

The business owners in the district, Maw said, not only had to persevere through the streetscape project but also a global pandemic.

“I am really honored to accept this award tonight,” Lazio said to the crowd, “but I think you earned it.”

Armstrong said when selecting the award, SBA looks at who is really partnering and collaborating with their small businesses while genuinely caring about them.

Main Street Ottumwa Executive Director Fred Zesiger said that since 2013, 24 businesses have opened and more than 200 jobs have been added to downtown Ottumwa. More than 100 upper-story apartments have also been renovated and occupied.

The streetscape project, he said, marks seven years of work in the downtown district, including parking lot improvements, the implementation of the Quiet Zones, facade projects, the development of the Canteen Alley and an increase in downtown events.

Armstrong also talked about infrastructure. “Everybody talks about the needs for infrastructure across the country, but you guys did it, and you did it together,” she said.

Lazio said the was a collaboration of many partners, including building owners, the Legacy Foundation, private investments and the city. It was a great partnership, he said, between local, stat and federal business organizations.

“We finished the project on time and on budget, and I think it will encourage people to visit a revitalized downtown. It’s been a long time coming, but we’re finally done,” Lazio said. “When you consider the investment in streetscape, facade projects and upper-story apartments, this has been a $35 million investment in downtown.”

The streetscape project kicked off in July 2019 and is the culmination of work through two construction seasons.

The revitalized downtown brought a sense of nostalgia, with Maw commenting on how people reminisce about how downtown Ottumwa used to thrive and how “it used to be.”

“Those days are no longer in the past. They are here today,” he said.

“I fell like I’m in a Norman Rockwell painting,” commented Tom Salisbury, SBA Administrator out of the Kansas City Regional Office, as he looked around the crowd.

As officials prepared for the ribbon cutting, Michale Wagler, Main Street coordinator at Iowa Economic Development Corporation, told the audience to look at the ceremony “not as the finish line but the starting line.”

“It’s been a struggle, I know, but we made it through it and we have a great future to look forward to,” Zesiger said.