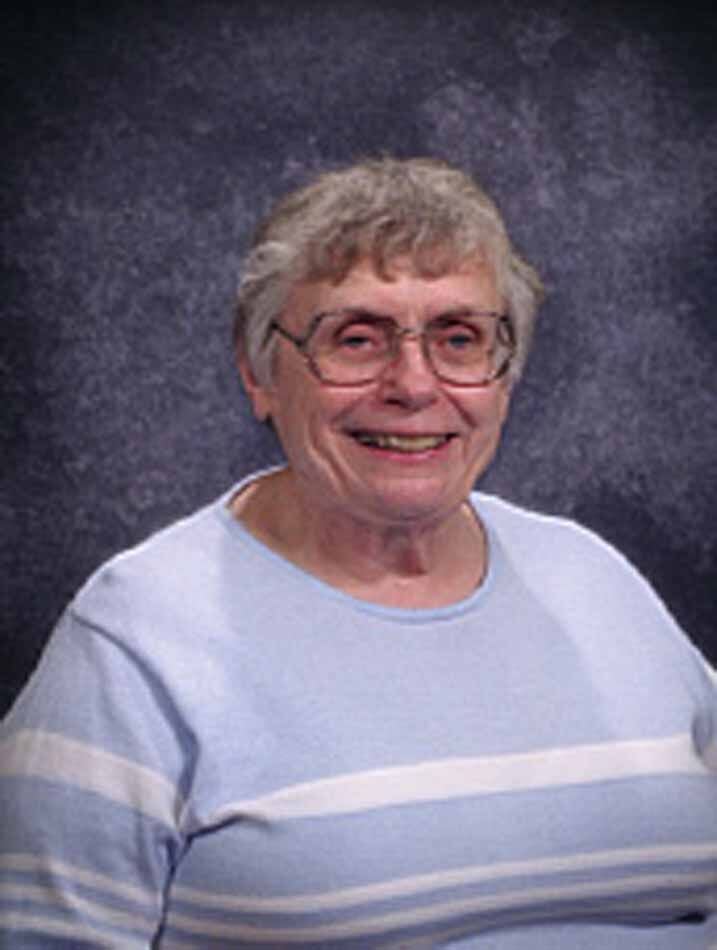 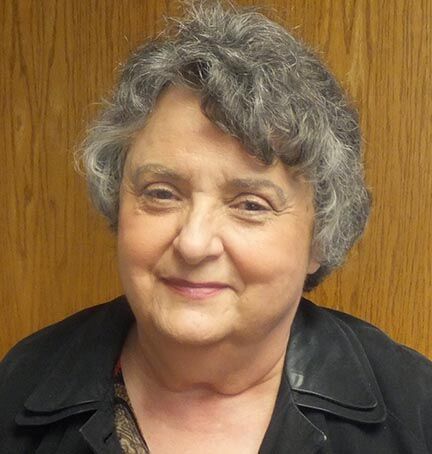 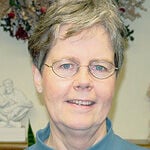 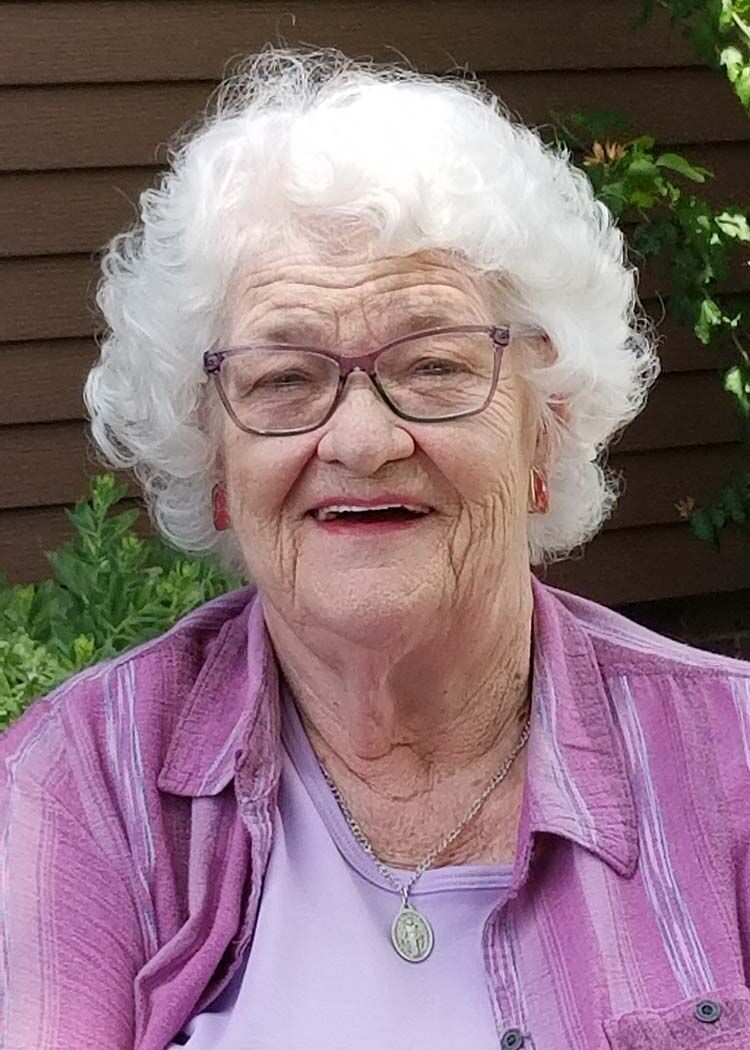 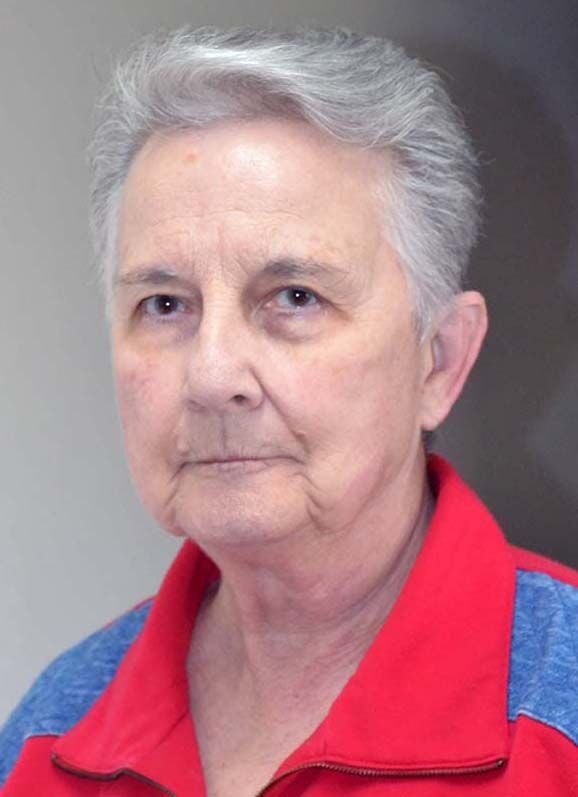 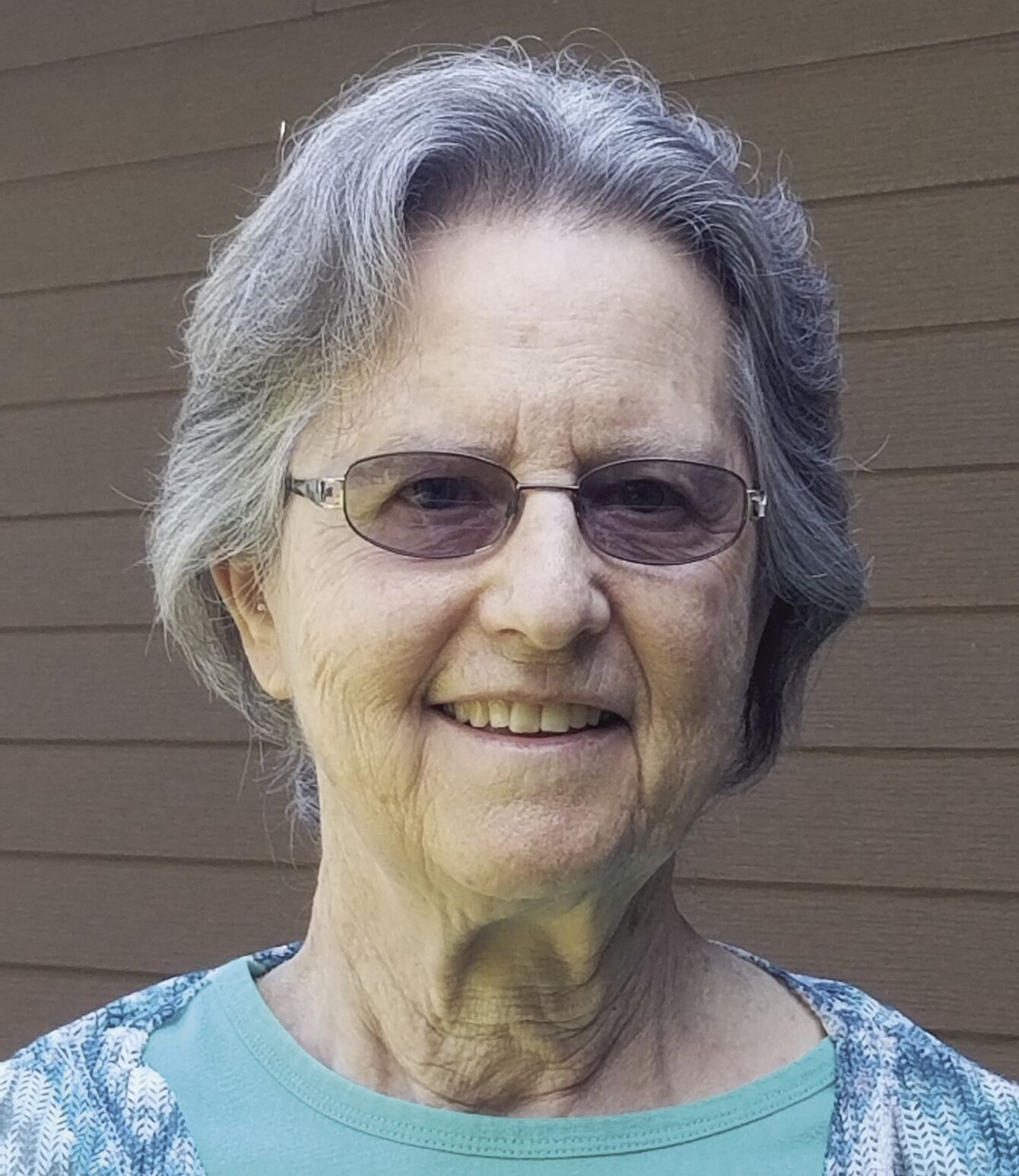 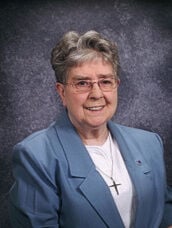 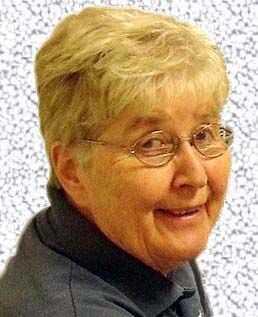 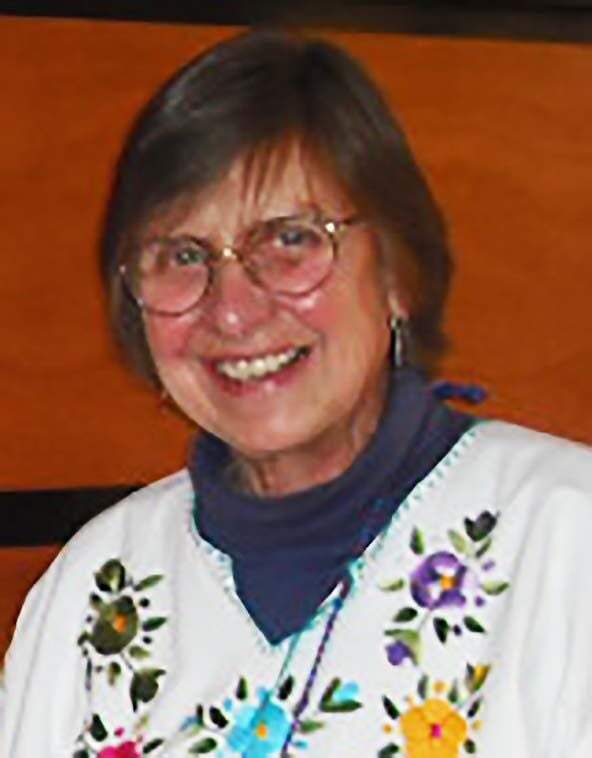 DAVENPORT — The Congregation of the Humility of Mary (CHM) announces the 2020 Jubilees of several members with ties to Ottumwa and Ottumwa Heights.

On Aug. 30, the congregation had a private Mass of celebration in the Magnificat Chapel at Humility of Mary Center in Davenport. Celebrant was Bishop Thomas Zinkula with Concelebrants were Msgr. Lawrence Beeson and Msgr. Francis Henricksen.

Sister Rosalia Riedel was born in 1923 in Milford, Ohio. She entered the Congregation of the Humility of Mary in 1945 and made her first profession in 1948. Sr. Rosalia received a B.A. in elementary education from Marycrest College in Davenport and 40 years later received a certified nurse’s aide degree from Scott Community College in Davenport.

After teaching, her ministry focused in a different direction. She worked in Davenport at the Center for Active Seniors (CASI) as a program assistant, a program facilitator and finally as a volunteer. Sr. Rosalia now resides at Bishop Drumm Care Center in Johnston, where she is active in a ministry of prayer and witness.

Sr. Rachel Beeson was born in 1932 in Des Moines. She entered the Congregation of the Humility of Mary in 1950, making her first vows in 1953.

Sr. Rachel studied education at Ottumwa Heights College in Ottumwa, received her B.A. in education from Marycrest College in Davenport and an M.A. in elementary administration from Southeast Missouri State University in Cape Gerardeau, Missouri. She also completed a corporate ministry program at St. Louis University in St. Louis, Missouri.

Sister Rachel’s varied ministries also included: plant coordinator at Ottumwa Heights in Ottumwa, coordinator of retired at Marycrest in Davenport, women’s counselor at New Life Style in St. Louis, Missouri, religious education coordinator at St. Anthony Parish in Knoxville, Iowa. She was a member of the Seeds of Hope team in Davenport, matching volunteers with opportunities to serve the homeless, migrants and refugees, inner-city children and the elderly

Sr. Rachel currently lives in Davenportat Humility of Mary Center where she is active in a ministry of prayer and witness.

Sr. Judith Carrara was born in Canton, Illinois, in l937. She attended St Mary’s Grade School in Canton. After graduating from Marycrest College, Davenport in 1960 with a B.A. in history, she entered the Congregation of the Humility of Mary and pronounced first vows in 1963.

Sr. Judith taught at Ottumwa Heights Junior College and was assistant professor at Marycrest College in Davenport. She was coordinator of elderly services for Rock Island County at Project Now in Rock Island, Illinois; program and compliance manager at Western Illinois Area Agency on Aging, which covers program support and funding to aging services in 10 Illinois counties. Her work in Davenport included social work/case management coordinator at Center for Aging Services (CASI); elder services program director at Friendly House; and supportive services coordinator to older residents for Signature Management. In 2007 she moved to Peoria, Illinois, to care for her mother who died at 100 years of age. After a sabbatical, she returned to ministry with senior citizens.

Sr. Judith currently lives in Bettendorf, volunteers as a support person to older adults and as a social justice advocate.

A native of Lewistown, Montana, Sr. Kathleen Hanley was born in 1942, entered the Congregation of the Humility of Mary in 1960 and made her first vows in 1963.

Sr. Kathleen’s ministry of teaching began at St. Vincent Lab School in Davenport. She taught at St. Austin School in Minneapolis and St. Pius X in Rock Island, Illinois, Lenihan High School and St. Henry in Marshalltown, and Columbus High School in Waterloo. In addition, she served as campus minister of music at the University of Northern Iowa. From 1978-80, Sr. Kathleen was the CHM director of novices; from 1980-84, she served as CHM vice president; and from 1983-86, she was the CHM coordinator of retired at the Humility of Mary Center. From 1995-2000, she served as executive secretary for the Sisters of Notre Dame de Namur in Saratoga, California. She has since been in music ministry in Montana at St. Jude Church in Havre, and St. Leo Parish in Lewistown. She also served as music director at St. Patrick Co-Cathedral in Billings.

Sister Kathleen sings in the Billings Symphony Chorale. She belongs to two book groups, one of which focuses on Pope Francis’ 2015 encyclical Laudato Si’: On Care for our Common Home. She volunteers as a cuddler in the neonatal intensive care unit at St. Vincent Healthcare. Sister Kathleen is dedicated to the ministry of prayer and witness.

Born in Bernard, Iowa, in 1938, Sr. Kathleen Henneberry entered the Congregation of the Humility of Mary in 1960 and made her first profession in 1963.

Sr. Kathleen received her B.A. in elementary education from Marycrest College in Davenport. She continued her education at many colleges with a focus on spiritual direction, theology, hospice care and pastoral ministry.

From 2008-10 Sr. Kathleen served as the CHM coordinator at Bishop Drumm Care Center in Johnston. She currently lives in Davenport at Humility of Mary Center, where she works with Sr. Rosie Restelli as sacristan, volunteers for the CHMs and visits immediate family members who suffer serious health issues.

Sr. Catherine Linnenkamp was born in Sigourney in 1938 and entered the Congregation of the Humility of Mary in 1960. Her first vows were pronounced in 1963.

Sr. Catherine’s ministry of teaching in Iowa found her at St. Anthony School in Des Moines, St. Mary School in Ottumwa, St. Mary School in Albia and Lourdes Memorial School in Bettendorf. She returned to Albia as principal in1970 and also served as principal at Lourdes Memorial School and Holy Trinity Catholic School in Davenport. Her ministry as assistant registrar at Marycrest College began in 1986. She then became registrar at Teikyo/Marycrest University. Changing ministries in 2000, she worked in health information management at Genesis Medical Center in Davenport. Currently Sr. Catherine lives in Davenport and serves as the CHM finance clerk at Humility of Mary Center.

Sr. Rosalind Restelli was born in 1942 in Great Falls, Montana, and entered the Congregation of the Humility of Mary in 1960. Her first vows were pronounced in 1963.

Sr. Rosalind received an associate degree in teaching from Ottumwa Heights College in Ottumwa and a B.A. in elementary education from Marycrest College in Davenport. Her ministry of education found her at schools in Iowa including St. Mary School in Marshalltown, St. Pius X in Des Moines, Lourdes Memorial School in Bettendorf, and St. Joseph School in Neola. She also taught at Our Lady of Sorrows in Wahiawa, Hawaii. Sr. Rosalind also served as a pastoral minister at St. Patrick Parish in Neola. She was the last Sister of Humility to serve in Neola, having ministered there for 37 years. Sister Rosalind now lives at Humility of Mary Center in Davenport, where she is a sacristan.

Sr. Johanna Rickl was born in 1942 in Glendive, Montana, and entered the Congregation of the Humility of Mary in 1960. Her first vows were pronounced in 1963.

Sr. Johanna received her associate degree in education from Ottumwa Heights College in Ottumwa, a B.A. in biology from Marycrest College in Davenport, and an M.S. in zoology from Arizona State University in Tempe, Arizona. She later completed the Qualified General Interpreter Program at Des Moines Area Community College and is a charter member of the Iowa Interpreters and Translators Association.

Her ministry of teaching began at St. Anthony School in Des Moines and continued at Great Falls Central in Great Falls, Montana; Walsh High School in Ottumwa; and Bourgade High School in Phoenix, Arizona. Sr. Johanna did pastoral work in Chiapas, Mexico, for 13 years and later at St. Michael Parish in Conrad, Montana. She was pastoral administrator of St. William Parish in Dutton, Montana, for 10 years. From 2003-08 she lived in the CHM New Hope Community, serving residents of the River Bend neighborhood of Des Moines and interpreting at Mercy Medical Center.

Sr. Johanna has served as president and vice president of the CHM community and is currently part of the CHM Leadership Team in Davenport. Much of her attention is directed to the CHM sponsored ministries, Humility Homes & Services, Inc., and Our Lady of the Prairie Retreat.

Born in Davenport St. Alphonsus Parish in 1940, Sr. Nancy Schwieters entered the Congregation of the Humility of Mary in 1960 and made her first vows in 1963.

Sr. Nancy received an associate degree in elementary education from Ottumwa Heights College, Ottumwa, a B.A. in elementary education from Marycrest College, Davenport, and an M.A. in religious education from Seattle University in Seattle,. Sr. Nancy’s ministry of teaching in Iowa found her at St. Pius School in Des Moines, St. Mary School in Marshalltown and Holy Trinity School in Davenport. She also taught at Sacred Heart School in Glendive, Montana, and coordinated the CHM formation program at the Ottumwa Heights Center in Ottumwa.

Sister Nancy served with John Lewis Community Services as a job connect and computer lab mentor. She continued that ministry with Humility of Mary Shelter, Inc., in Davenport. She has since retired and is active in a ministry of payer and witness.

Sr. Mary Penelope Wink was born in Evanston, Illinois, in 1941. She entered the Congregation of the Humility of Mary in 1960. Her first vows were pronounced in 1963 and final vows in 1968.

Sr. Mary Penelope taught in Iowa at St. Pius X in Des Moines, St. Mary and Lenihan High School in Marshalltown, and at Ottumwa Heights in Ottumwa. She worked with single mothers while working in a university laboratory in Nashville, Tennessee, and Houston, Texas. She also acted as CHM formation director and associate coordinator. Since 1975, Sr. Penelope’s ministry has been that of pastoral work in different parishes of the Diocese of San Cristóbal de Las Casas in the state of Chiapas in Mexico. She also serves on a variety of diocesan commissions. In addition, since 2002 she has ministered as a psychotherapist and since 2018 as a Polarity Integration therapist in Chiapas.