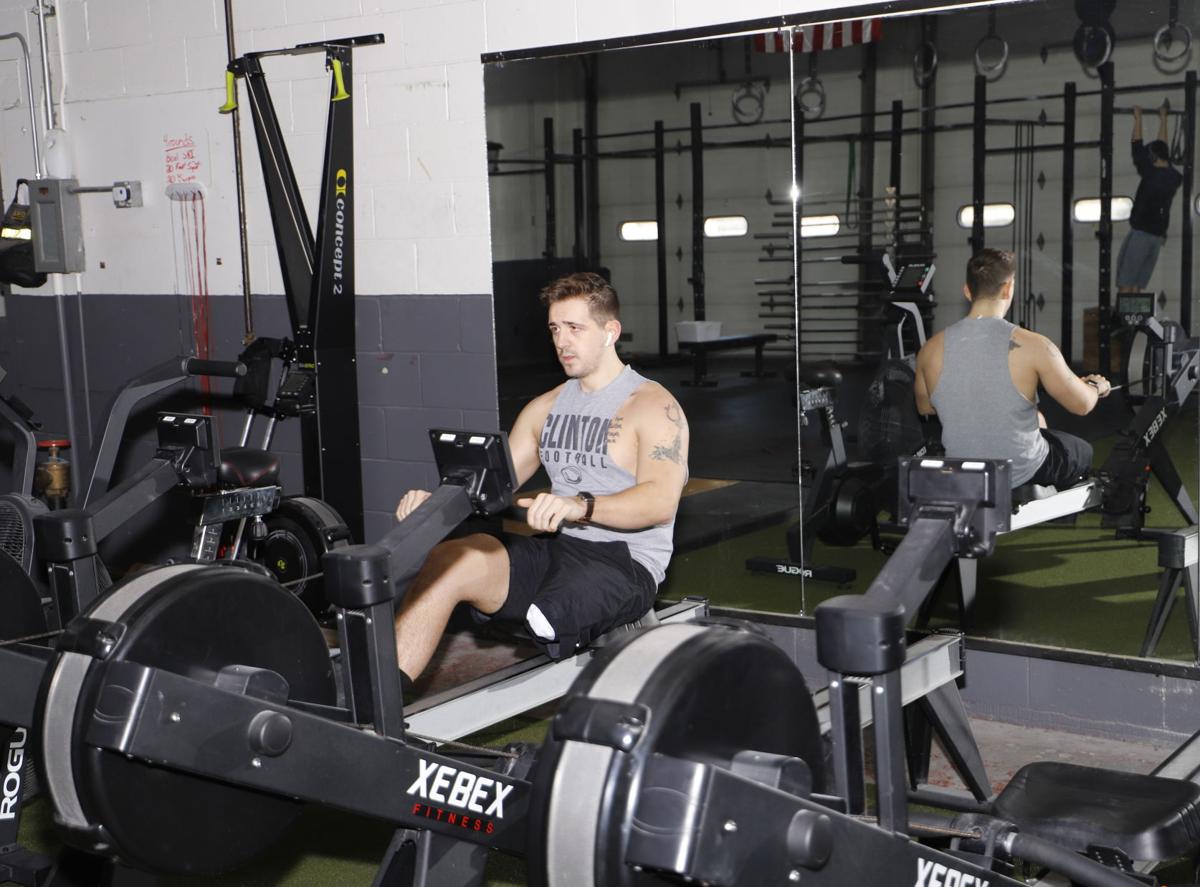 Josh Hill works out on a rowing machine Tuesday at KT3 Fitness in Fulton, Illinois. Hill lost his leg to cancer last month, but he’s still at the gym nearly every day, inspiring people around him. 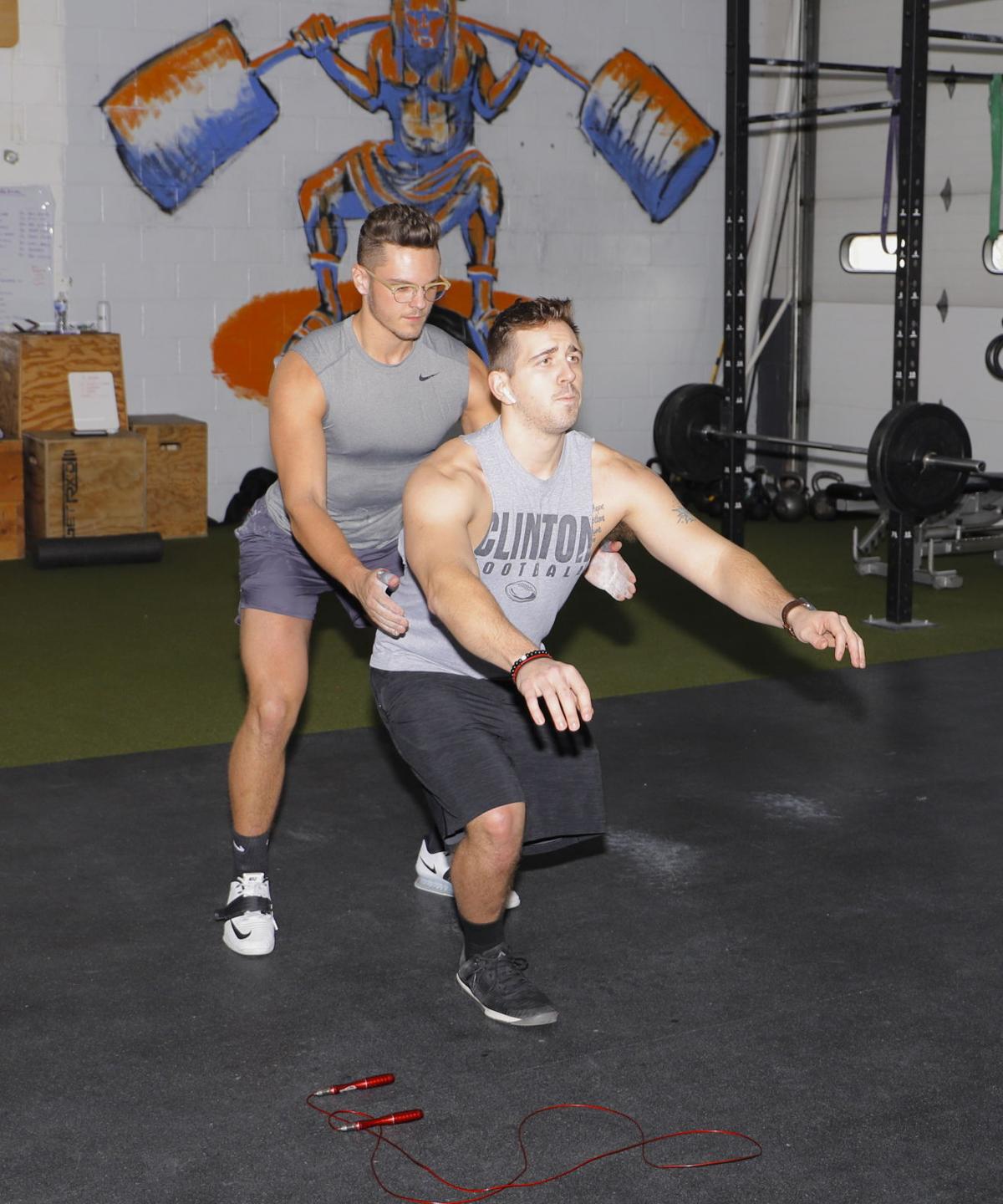 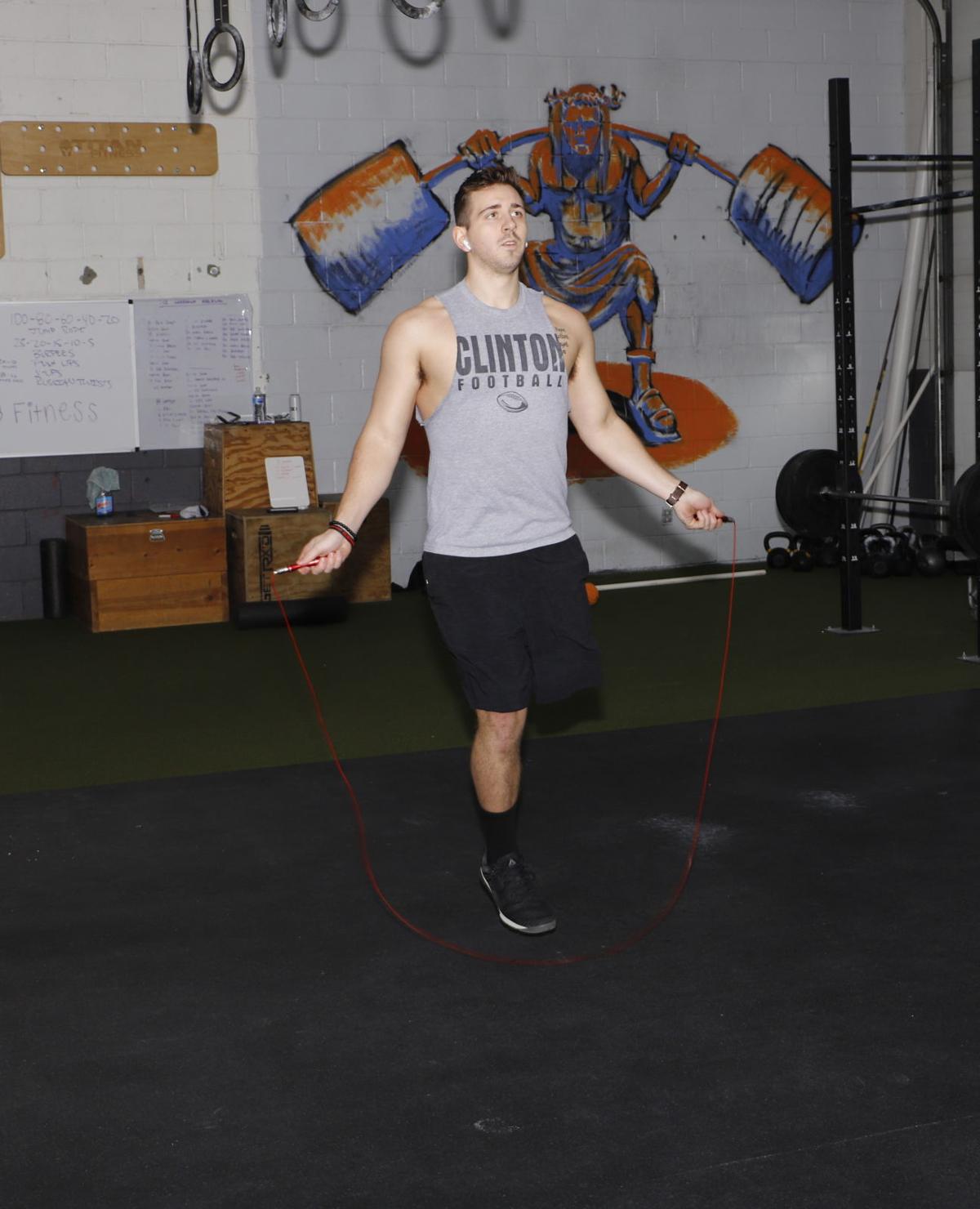 Josh Hill jumps rope Tuesday at KT3 Fitness in Fulton, Illinois. A recent amputee, Hill is relearning with one leg what came naturally with two.

Josh Hill works out on a rowing machine Tuesday at KT3 Fitness in Fulton, Illinois. Hill lost his leg to cancer last month, but he’s still at the gym nearly every day, inspiring people around him.

Josh Hill jumps rope Tuesday at KT3 Fitness in Fulton, Illinois. A recent amputee, Hill is relearning with one leg what came naturally with two.

The pose and the clothing show solidarity for the 22-year-old who no longer has a lower left leg to raise.

The change from normal young adult to amputee came quickly for Hill. And yet, it didn’t. Hill had experienced pain for about a year before doctors decided he might have a serious problem.

“Most of my life I was a competitive swimmer,” Hill said Tuesday during a workout at KT3 Fitness in Fulton. Swimming since the age of 7, Hill competed for Clinton High School and for Western Illinois University.

In 2012, Hill learned CPR to become a lifeguard and swim instructor for YWCA in Clinton. Two months later, the 15-year-old saved his father’s life when he found the elder Hill having a heart attack in the family home, called 911 and performed CPR until emergency personnel arrived.

Hill attended college with an eye to becoming a firefighter, earning a degree in fire science from WIU. After graduation, Hill became a property storm adjuster for Farm Bureau.

Though he stopped swimming, Hill worked out regularly. “Working out is basically my life,” he said. So when he felt pain in his heel about a year and a half ago, his doctor assumed he had tendonitis.

In reality, a cancerous tumor was pressing on Hill’s Achilles tendon.

Months passed. “I started getting a lot of pain in my knee,” said Hill. It affected his workouts.

This time, doctors performed a biopsy and found 19 tumors. “Basically the cancer had crawled all the way up my left leg,” said Hill.

“[It’s] a really, really rare form of cancer,” Hill said, affecting only about 50 people worldwide. “It’s a blood vessel cancer, but it was in my bone.”

Hill’s doctor didn’t have much information about the cancer and wasn’t sure it would respond to chemotherapy or radiation. The doctor recommended amputating Hill’s leg above the knee.

Hill sought a second opinion, but the second was the same as the first. Removing the leg was the best way to make sure the cancer didn’t spread.

Hill remembered tapping both feet on the ground while sitting by his dad before his surgery. His dad lamented that he would never see that again.

“That was pretty tough,” Hill said.

Hill wondered what life would be like without two legs. “I had a bit of anxiety.” He thought of all the things he wouldn’t be able to do again once his leg was removed.

He didn’t really have a choice. “It was either I risk my life, or I get rid of the cancer.”

Doctors diagnosed the cancer Nov. 11. They removed Hill’s leg Dec. 6. Two days after leaving the hospital, Hill was back in the gym.

A month after surgery, Hill isn’t complaining. He’s doing burpees and pull-ups, jumping rope and pulling his body weight on the rowing machine.

He’s even doing squats — on one leg.

“I’ve known Josh for a very long time, and he’s always just been a positive dude,” said Kyle Huebner, owner of KT3 Fitness in Fulton. “His work ethic is incredible. He’s so motivated all the time to do new things.”

That motivation has been very apparent since the diagnosis of Hill’s cancer, Huebner said. “It’s obviously a crazy situation. ... He’s had his times when he’s been down, but 99.9% of the time [he’s] positive. It really motivates people around him.”

Hill’s quick recovery was possible because of his excellent physical health, but his emotional recovery came through the support of family and friends.

“I couldn’t have gotten through this without my parents,” Hill said of David and Gini Hill. “They’ve always made sure I’ve had every opportunity in my life to be successful.”

Hill’s girlfriend, Keelie Shuck, didn’t leave the hospital the entire time Hill was there. After surgery, his KT3 friends hugged him each day he returned to the gym.

“As soon as you join this gym, you gain a family,” Hill said.

Losing a leg was not part of Hill’s life plan. “It happened, and I can’t do anything about it,” Hill said. He can be miserable, or he can view the situation as an opportunity.

“I do want to reach out and help people,” Hill said. He’s launched an Instagram account, @ampu.fit, where he posts photos and videos of himself working out, adapting his workouts to fit his new body.

“It’s kind of fun trying to figure out how to do things,” Hill said. He has to make this his new norm.

Hill hopes the way he has dealt with his situation will inspire others and help them deal with whatever adversity comes into their lives. “I would love for people to reach out to me,” said Hill. “I love talking to people.”

Hill still worries about the cancer recurring. “I had a full-body bone scan, and it only showed tumors in my left leg,” Hill said. Still, when he feels pain, which he does often because of intense physical activity, he wonders if the cancer is back.

In the next month, Hill expects to get a temporary prosthetic leg to toughen up his stump. A couple of months after that, he should get his permanent prosthesis.

Insurance will pay for a regular prosthesis, but Hill is far from regular. His family and friends are raising funds to purchase a prosthesis for working out and running.

Hill confessed that he never was much of a runner, “[but] losing a leg makes me really, really miss running.” He hopes to compete in the Paralympics.

On Saturday, KT3 hosted #UpHillBattle, a fundraiser to help purchase an athletic prosthesis for Hill. Athletes paid an entry fee to do a series of workouts and win prizes, Huebner said.

“Everyone was out of their comfort zone doing workouts they don’t usually do,” Huebner said. He and Hill were still sore Tuesday from the event.

“His positivity is just contagious,” Huebner said of Hill. “He’s just one of the best people that’s ever come into my life.”

RICHLAND [mdash] Bruce Sigmund Stutheit died January 28, 2020 at his home in Richland, Wa. You may leave a message for the family at www.Prosserfuneralhome.com