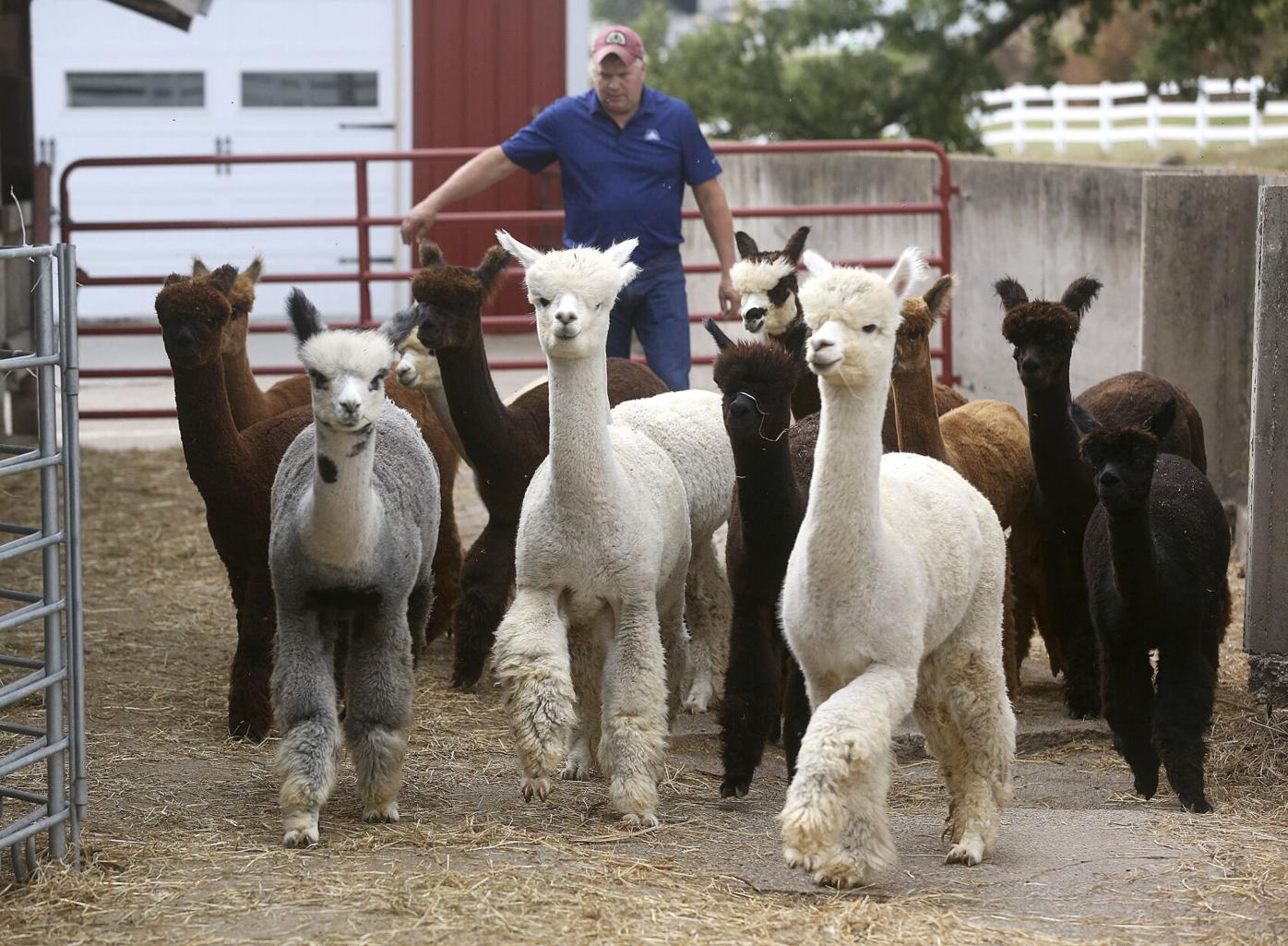 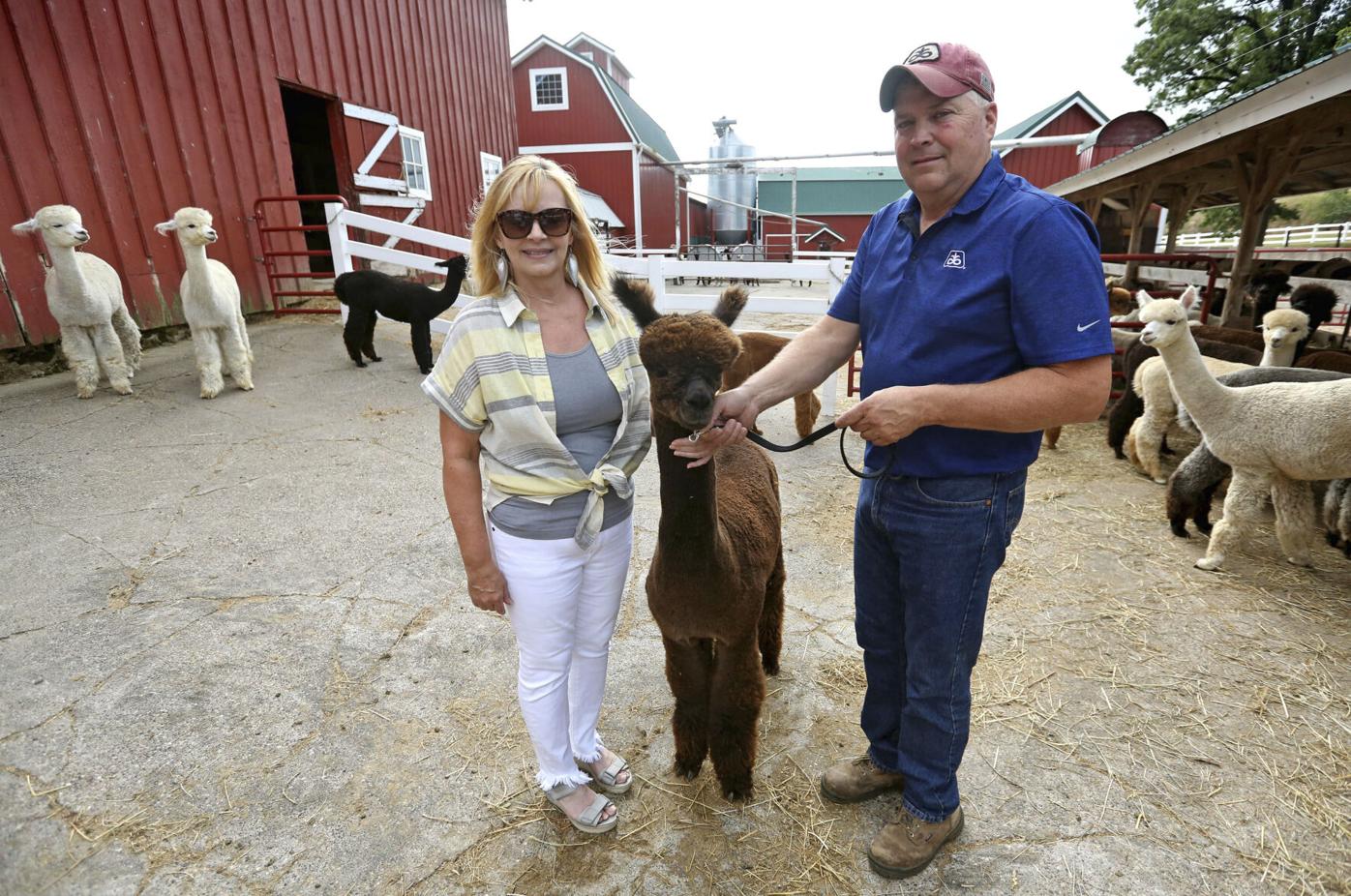 Julie and Mike Delaney are seen with some of their alpacas at Irish Meadows Alpaca Farm, Tuesday, Sept. 1, 2020, in La Motte, Iowa.

Julie and Mike Delaney are seen with some of their alpacas at Irish Meadows Alpaca Farm, Tuesday, Sept. 1, 2020, in La Motte, Iowa.

LA MOTTE, Iowa (AP) — From a distance, on the hilltops, brown, tan and gray shapes can be spotted combing through the tall, green grass.

The furry livestock isn’t the typical animal found on most farms in the Midwest, but a herd of woolly alpacas lazily grazes the hundreds of acres at Irish Meadows Alpaca Farm.

Julie and Mike Delaney own about 140 alpacas on their 400-acre farm in La Motte. Every year, the two load up about 20 animals and head to shows throughout the country, where judges rank the alpacas on body shape and the quality of the fleece, Julie said. The better the animal does, the more someone will be willing to spend to purchase it.

About 15 years ago, Julie was flipping through a magazine when she spotted ads for alpacas. The barns on their farm would not withstand hogs and cattle, and the more she learned about alpacas, the more intrigued she became with the soft, gentle animals.

“What we were looking for was a different type of animal to be in the antique barn buildings,” Julie said. “I came across that ad, and we couldn’t afford it and waited five years and then bought our first animals. I never gave up.”

Now Julie and Mike have more than just a farm full of alpacas, but also an alpaca shop called Irish Meadows Yarn Barn and Boutique, where they sell scarves, hats, socks, blankets and other items all made of alpaca fleece.

Every year in May, Julie and Mike shear the alpacas, then send the fleece off to “mini-mills” in Iowa, North Dakota and Ohio to have it made into items Julie will later sell in her shop.

“Whatever I can get made from our animals, I do, but we cannot make clothing because it is too expensive,” she said. “The only people who will deal with smaller quantities (operate) what’s called a mini-mill.”

Julie said she has been slowly building up her store for the past 10 years, and every fall and winter, the couple hosts an open house event at the farm where people take part in wine tasting, see the alpacas, tour the barns and answer fun questions about the animals. She said people mark the event on their calendars and come back each year with visitors from around the Dubuque area and throughout the nation.

However, this year both events have been canceled due to COVID-19.

“We now kind of have a destination barn as far as people like coming here, and they will make a return trip every year,” she said. “Normally, we have several thousands of people come.”

Julie said when it comes to naming the alpacas, it’s important to find strong, unique names.

“We named a male Showtime, and he ended up going on to get nine champions,” she said. “I have had sales just because I picked a certain name. People will buy an animal on emotion. Most of them don’t, but it has happened more than once.”

The Delaneys’ well-known alpacas have made a name not just in Iowa but all over the country and world, Julie said. People come from the East Coast and even countries such as Germany to buy alpacas or breed their alpacas with those at Irish Meadows.

Roy Davis is among the friends the Delaneys have made throughout the years. When Davis purchased his first three alpacas from a farm in Manchester, the sellers told him their animals came from Irish Meadows. During alpaca shows, Davis got to know Julie and Mike, who later became his mentors in the trade.

“It’s been really great,” he said. “They really help me out a lot. When I have problems, I call them and tell them what’s going on.”

Davis said he now has about 20 alpacas at his farm in Hedrick. If he ever needs anything or needs Julie and Mike to look at one of his animals, he knows he is welcome on their farm, he said.

“I just appreciate all of the help they are willing to give,” he said.

Although Julie’s dream of owning alpacas was on hold for some time, and it has taken years to build up their name in the show-ring, it was worth the wait, she said.

“We love the show life,” she said. “We love meeting other breeders, competing, and we just love the gentle nature of the animals.”

For copyright information, check with the distributor of this item, Telegraph Herald.