OTTUMWA — The Iowa Supreme Court has sided with the city in a dispute over the release of records from the RedSpeed system used for ticketing speeders, saying federal law blocks their release.

The decision, which saw the court split on the outcome, overturns a district court ruling in favor of the records’ release. 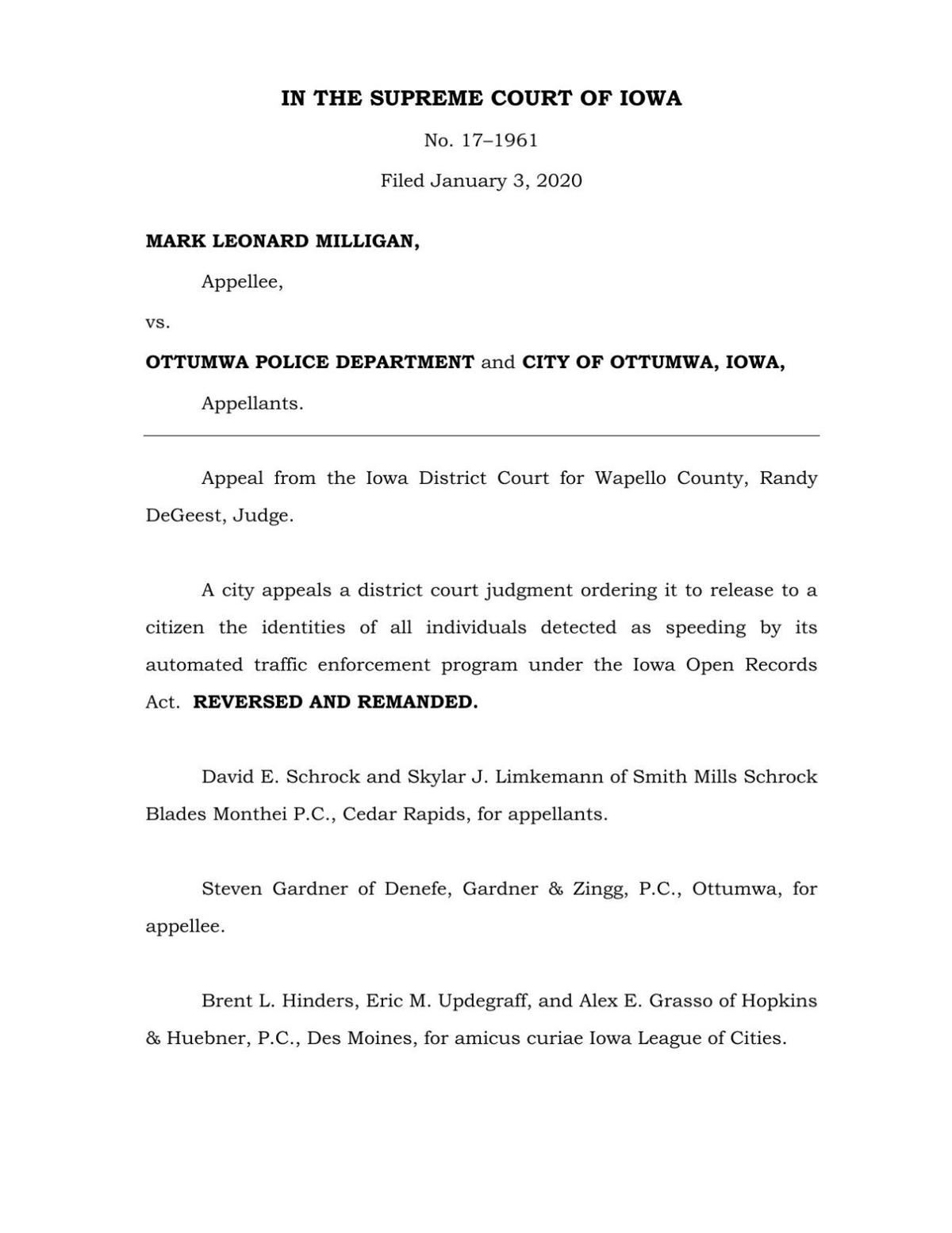 The court pointed to a decision by the United States Supreme Court in which it “directed that DPPA exceptions should be construed narrowly,” and concluded none of the exceptions to the Driver’s Privacy Protection Act of 1994 applied.

Mark Milligan, a former police officer, sued after a 2016 request for information detailing which vehicles were caught speeding and which of those incidents generated tickets was rejected. The city claimed both federal and state law protected the information. District Judge Randy DeGeest agreed with Milligan, finding there was “no justification” for withholding the information.

In its reversal, the state’s high court found that Milligan was neither a government agency nor was he carrying out a government function.

“In fact, it is undisputed that Milligan was requesting the records in his capacity as a private citizen, using his personal home address, email and telephone number,” the court wrote.

Justice Edward Mansfield, writing for the four-member majority, also found “insufficient proof” that the information was needed for use in other proceedings. While noting that Milligan said he sought it so he would have it for a suit against the city and police chief, the court said there was no explanation for why the information was relevant.

The ruling disagreed with the district court’s finding that the citations were covered under language allowing the records’ release as driving violations, which are exempt from the prohibition.

In ruling for the city, the court said Milligan’s argument could be expanded to include anyone issued a warning by law enforcement, even if they were not ticketed. And the release of the information, including names and license plate numbers “could be used to facilitate stalking — exactly the situation the DPPA was enacted to prevent.”

The opinion also reversed the award of more than $57,000 in legal fees which were awarded to Milligan.

The ruling was not unanimous. Justices Thomas Waterman, Edward Mansfield, Susan Christensen and Christopher McDonald were in the majority. Justices David Wiggins and Brent Appel filed a dissent written by Wiggins.

In his dissent, Wiggins wrote the state’s open records act requires Ottumwa to disclose the information and neither the state nor federal laws cited by the city offer protection.

“After reading the decision in the Milligan case it certainly seems like a significant setback for government transparency."

“It is clear to me that under any one of these exceptions, the City is allowed to disclose the information sought by Milligan,” Wiggins wrote.

Wiggins’ dissent stressed that Milligan’s open records request did not seek the broad information the court’s majority implied could be released:

“I also emphasize that Milligan is asking for only the names of persons, not extraneous information such as license numbers, plate numbers, or addresses. The release of this limited information will not be contrary to the purpose of the DPPA, which is to address public safety concerns regarding stalkers’ and other criminals’ easy access to the personal information in IDOT records and to restrain the sale of that information to businesses and individuals.”

Randy Evans, executive director of the Iowa Freedom of Information Council, which submitted a brief in the case supporting the records’ release, sharply criticized the court’s decision. he said there is “all sorts of potential for preferential treatment” in systems like the one formerly used in Ottumwa.

“After reading the decision in the Milligan case it certainly seems like a significant setback for government transparency,” he said. “When you read all the briefs that were filed in the case you come away with the realization that the supreme court majority has said, in effect, it’s going to be impossible for journalists or concerned citizens to monitor how law enforcement agencies make decisions about who gets ticketed and who does not get a ticket.”

The Courier was unable to reach the city attorney for comment.

The city began exploring the idea of an automated system to catch speeders in 2015, when Police Chief Tom McAndrew briefed the council on the proposal. The system measured vehicles’ speeds and snapped a photo of drivers going too fast for the area.

Reports of speeding were reviewed before any citation was sent. The citations did not have an effect on drivers’ licenses provided they were paid.

The system was controversial. Supporters, including McAndrew, said it was a way to cut down on speeding and boost safety. Critics said it was designed to boost the city’s bottom line with fines.

RedSpeed terminated its contract with Ottumwa in October 2018.