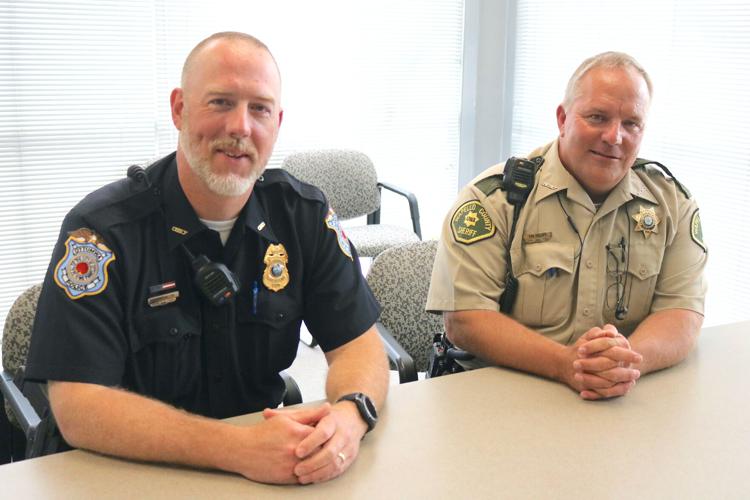 Ottumwa Police Department Chief Chad Farrington (left) and Wapello County Sheriff Don Phillips both believe law enforcement has plenty to learn, but also trust between law enforcement and its citizens is vital for a good relationship in the community. 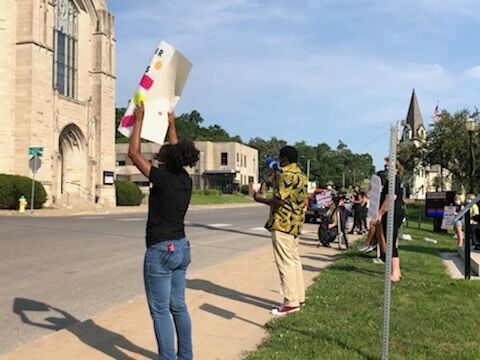 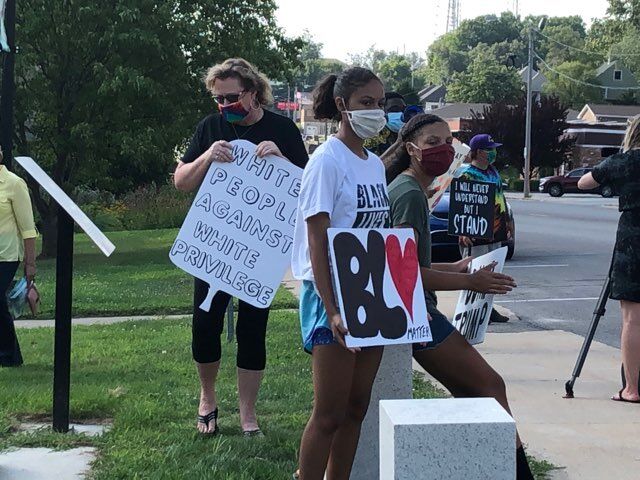 Ottumwa Police Department Chief Chad Farrington (left) and Wapello County Sheriff Don Phillips both believe law enforcement has plenty to learn, but also trust between law enforcement and its citizens is vital for a good relationship in the community.

OTTUMWA — There is work that still needs to be done.

No matter who you talk to on either side of the George Floyd discussion, that seems to be the consensus.

Ever since Floyd, who was Black, was killed by white Minneapolis police officer Derek Chauvin a year ago today, there have been cries from Black Lives Matter protesters on one side, demanding an end to racial injustice. Since, laws on the books have been amended for how law enforcement conducts its duties.

In the middle is a solution, one that both sides believe needs to be sought after and discovered.

"I think the only way to bridge that divide, I mean I'm a believer that you can't have any type of relationship with anybody if there isn't even the most minuscule amount of trust," Ottumwa Police Chief Chad Farrington said. "Of course there is outreach and conversations, and I can talk until I'm blue in the face, but either somebody wants to have that amount of trust in me and my officers or they aren't going to."

One of the ways to bridge that gap could rest with the citizens. Lorraine Uehling-Techel leads Ottumwans for Racial Justice, which is designed to bring awareness of systemic racism. The group formed just after Floyd's death, and has worked with the city to restore a human rights commission for the first time since 2015.

Because of Ottumwa's population of about 25,000, it is not required by state law to have a commission (only those for 29,000 and greater). However, that has not stopped the group.

"People have biases that they're not aware of or that they haven't addressed yet," Uehling-Techel said. "Changing and bringing awareness, I guess, is one of the main things we want to do. We want to stand in solidarity with Black people and people of color and indigenous people, no matter whether it's in our community or other communities."

Farrington and Wapello County Sheriff Don Phillips both are proud of the record they own and stand by their guidance of "we arrest anyone if we have probable cause." Skin color has not mattered to either man even though the is community is a diverse one.

Though Ottumwa is still predominantly white, arrests of Blacks, Hispanics and "Other" were between 5% and 9%, law enforcement said. Police officers have a code that is entered at the time of a traffic stop to determine the color and gender of an offender, and have done so for more than a decade because of complaints about racial profiling.

"There was a big push for that when we started," Farrington said. "It was about profiling because only people of color in certain neighborhoods were being pulled over, given tickets or harassed."

Both Farrington and Phillips are blunt. They believe Chauvin went over the line by kneeling on Floyd's neck for 9 minutes and 29 seconds after he was apprehended and on the ground following a traffic stop.

"The Iowa General Assembly basically changed the code to include getting rid of chokeholds that would deprive somebody of oxygen, and that it's considered deadly force," Farrington said. "It was always deadly force.

"I don't think you would find another police officer in the country who wouldn't say it was unnecessary and excessive."

Perhaps not. But residents would still like to make sure law enforcement is held accountable by working together. Uehling-Techel has advocated for a citizens board to oversee law enforcement.

"That's something we spoke extensively with the chief and the mayor (Tom Lazio) about last summer," she said. "That is yet to be created, but it's still a goal that we have for the community."

Farrington said he has been left on the sideline lately in discussions about such a board, but some talks have been ongoing with other city officials.

"I guess I don't have a strong opinion at this point," he said. "I guess the only caution I would have is just that processes have to follow a due process. They can't be emotionally charged decisions."

Still, racism has been spotted when others aren't looking. Rachelle Chase, who identifies as Black and works closely with Uehling-Techel, had a personal brush as she was picking up her dog in a rural part of Ottumwa, only to be told that there aren't many of "her kind" that came out that way. She said they tried to claim it as a close-knit neighborhood watching out for each other.

That's not how she interpreted the encounter.

"I was pretty taken aback by that. I was pretty angry," she said. "I was almost like, 'I'm not leaving. Now I'm going to sit here even longer.'"

Racial justice advocates who spoke to The Courier passed along some examples they've heard. Recently, a Black man with dreadlocks was walking through the mall and claimed he was racially profiled because of his hair. Also, a Filipino woman was verbally accosted while walking home. Those examples are why some advocates want the human rights commission restored.

Others believe diversity can be the city's greatest strength. Aiddy Phomvisay, who recently began a job with the Ottumwa Community School District in which one of his responsibilities is equity coordinator, is developing a committee to help work through any profiling issues.

"We expect all students and all staff to be treated with dignity and equity," he said. "We're responsive and proactive to these issues as much as possible, and that's part of growing together as a learning community. They're all our kids, and their safety is the highest priority."

The law enforcement officers are aware to the city's diversity and believe it is a strength, but they also have seen apprehension toward law enforcement, with much of it based on culture.

"Early on in my career, there was a huge issue there, a deep-seated mistrust by the Hispanic population," Farrington said. "But for me, it was kind of learning that in their culture and addressing something in a different way, taking a different approach."

When it comes to personnel, Farrington and Phillips try to reflect the community's diversity. However, they also said their main job is to hire the best officers and deputies they can find in a career that is starting to see less interest.

"We just hired the first female deputy a year ago and we're going to have a Spanish male deputy," Phillips said. "At one point at the jail, I had an American Indian, a Black man, and a Black female correctional officer."

Farrington said he has two officers of color in his department, with one of them in-field training and another at the Iowa Law Enforcement Academy.

In the end, while it is important to have law enforcement agencies that reflect the community, sometimes it is difficult. Part of the reason, Phillips said, is the testing is rigorous and whittles away candidates of all ethnicities.

"But they're all on the same even playing field when they come in," he said. "They have to pass those tests to get to that point."

And training also becomes an issue outside of the academy.

"If I was able to train my officers the way I would like to, I would never have any officers go out in the street because it's 24-7 training, especially when we're talking about live and death situations," Farrington said. "We can always improve and we can always get better."

Various reforms of law enforcement have also been bandied about on a national level, including taking some of the more tedious work off of the officers' shoulders and working more with social worker's mental health advocates.

"What law enforcement was originally designed to do and what it does today don't mesh up," he said. "It used to be when you had a problem, it was taken care of. Law enforcement has been stretched into different venues that it wasn't necessarily really thought of."

Still, the sheriff's office and police department follow another simple premise: they police their own.

"I lived Internal Affairs for six years and I investigated officers on all sorts of things," Farrington said. "We take every complaint seriously and it's investigated. If the investigation shows an officer did wrong, then corrective action will be taken, and if that's termination, so be it.

"But I think that people have to come to the table," he said. "It doesn't have to be snuggles and open arms and absolute trust, but if there is mistrust, it's toxic. I don't see the issues in larger cities here, and I don't want to see that here. I just think we have to stop pointing fingers from the get-go and having an open mind, try to be amicable and patient and have some thoughtful communication."

That is not how the activists completely see it.

"We did have quite a bit of momentum for a few months, but it feels like some of the folks are waiting for us to go away," Uehling-Techel said. "It's been incredibly frustrating for me. We aren't going away, and we're going to continue to push."