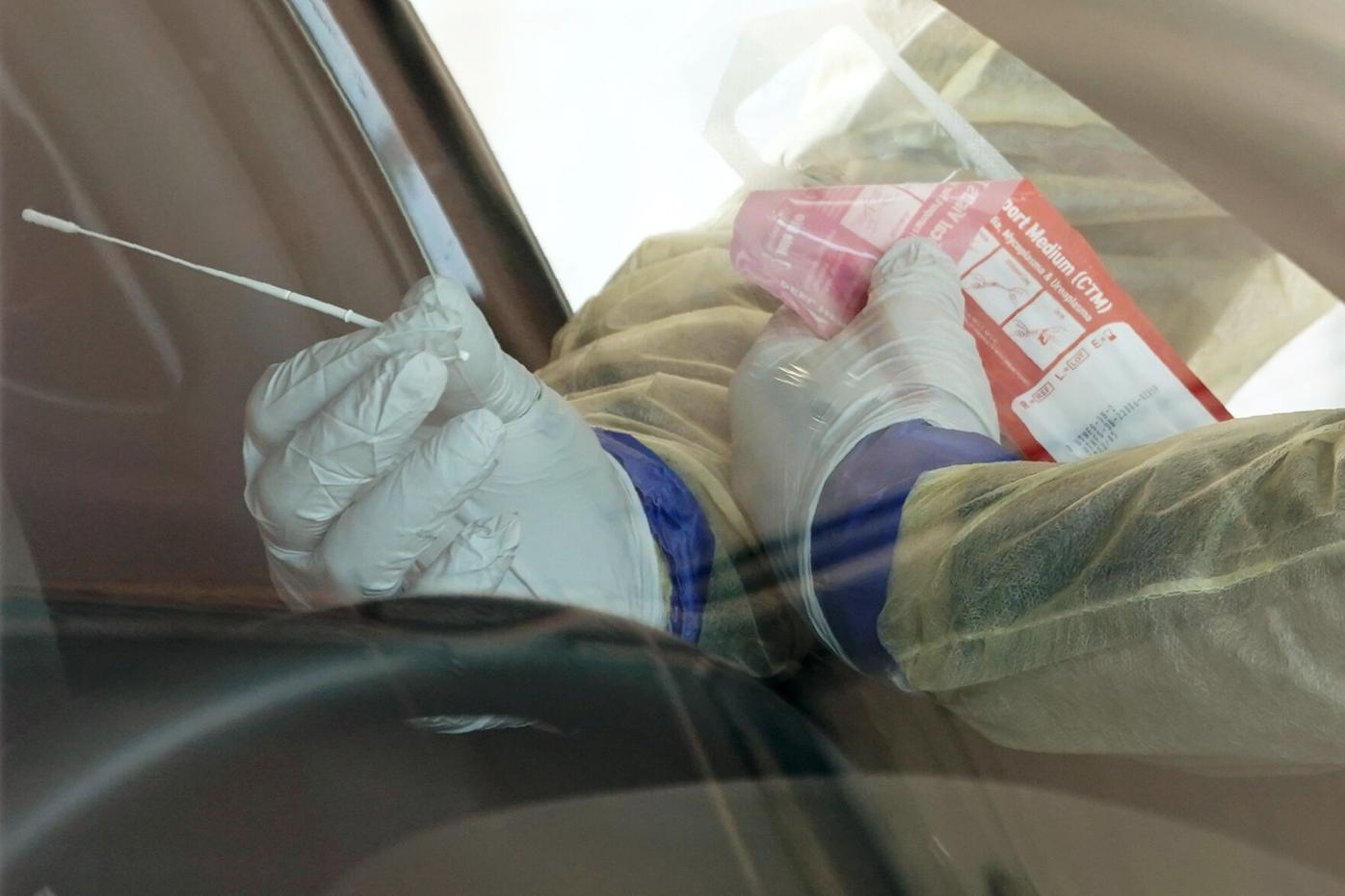 A worker wearing gloves and other PPE holds a nasal swab, Wednesday, Oct. 28, 2020, at a King County COVID-19 testing site in Auburn, Wash., south of Seattle. 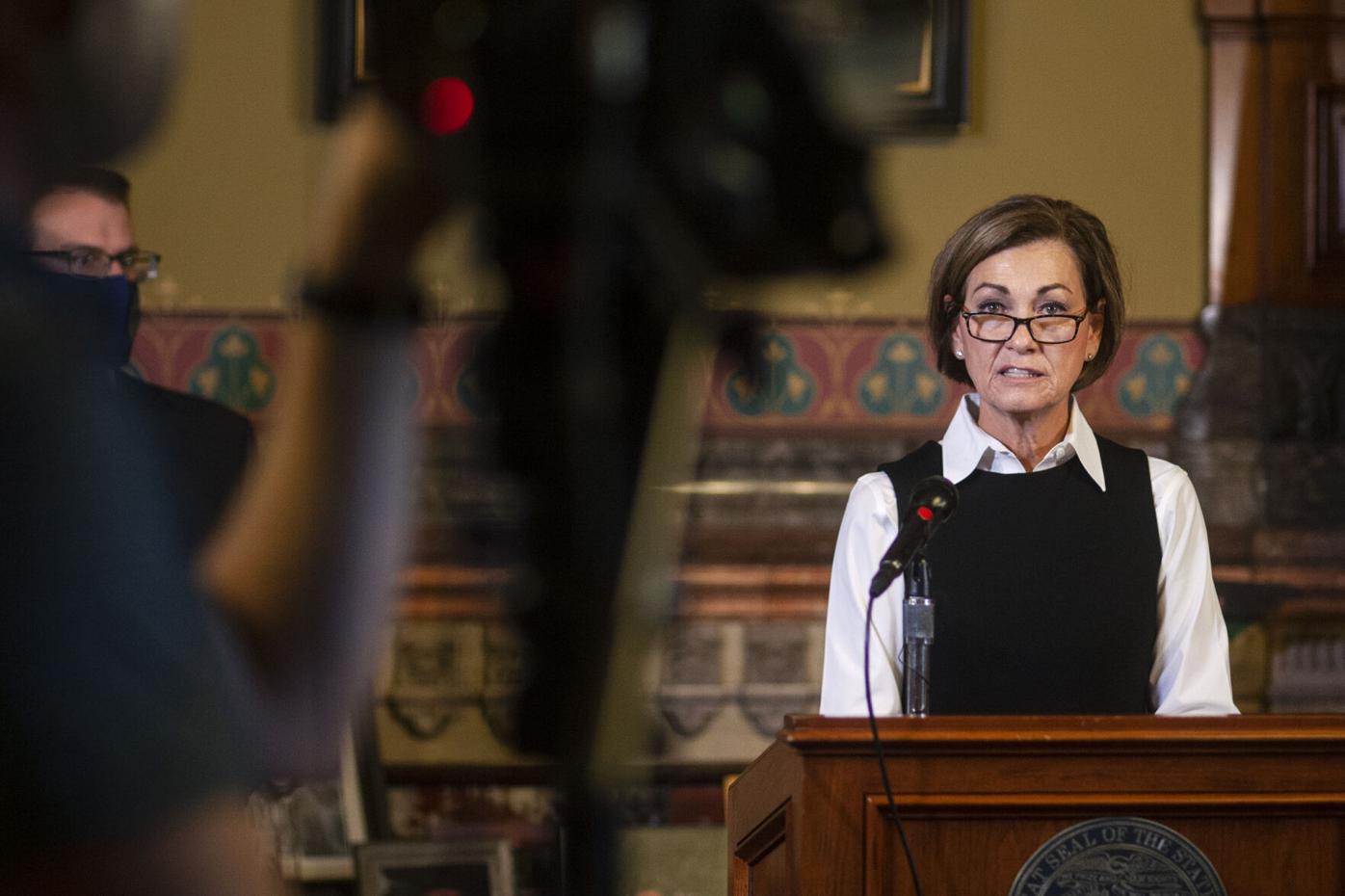 Iowa Gov. Kim Reynolds speaks during a COVID-19 news conference on Thursday at the Iowa Capitol in Des Moines. Reynolds announced the launch of a public awareness campaign to encourage more social distancing and hygiene habits. "Government solutions alone can't stop this virus. It's up to every single one of us," Reynolds said.

A worker wearing gloves and other PPE holds a nasal swab, Wednesday, Oct. 28, 2020, at a King County COVID-19 testing site in Auburn, Wash., south of Seattle.

Iowa Gov. Kim Reynolds speaks during a COVID-19 news conference on Thursday at the Iowa Capitol in Des Moines. Reynolds announced the launch of a public awareness campaign to encourage more social distancing and hygiene habits. "Government solutions alone can't stop this virus. It's up to every single one of us," Reynolds said.

OTTUMWA — A day after Iowa hit record growth for coronavirus cases, the state added another 3,533 on Friday. Wapello County had 33 of those newly confirmed cases.

The positivity rate, which is one metric in determining whether schools can apply for waivers to move to virtual instruction, is also rising. In Wapello County, it’s now 19% — the highest it has been since the state began reporting the data point in August.

Guidelines set by Gov. Kim Reynolds dictate that schools in counties with a more than 15% positivity rate over two weeks that also have an absentee rate above 10% can request a waiver to move to virtual instruction. Schools in counties above 20% can request waivers regardless of absentee rate. Applying for a waiver is optional, and the state must still approve the request if filed.

The U.S. Centers for Disease Control and Prevention says a 5% positivity rate signals a community is a hot spot, meaning there’s a significant community spread occurring.

As of Friday, 117 students and nine staff members are quarantined due to possible exposure.

There were 22 new cases reported between 10 a.m. Thursday and 10 a.m. Friday in Appanoose, eight in Van Buren, seven in Jefferson, five in Davis and three in Monroe.

On Thursday, Reynolds implored Iowans to act responsibly to slow the spread of the virus in Iowa, as hospitals begin to be taxed by an influx of patients.

So far in November, Iowa has confirmed 16,785 new cases of the virus — including a single-day record of 4,562 cases the state added Thursday.

Hospitalizations hit yet another new record Friday, with 912 hospitalized with COVID-19 in Iowa, including 188 in an intensive care unit, which ties the state record. There were 164 new admissions in the last 24 hours, which ties the single-day record from October.

The number of intensive care unit beds reportedly available are at near-record lows, with 344 reported Friday. A model from the Institute for Health Metrics and Evaluation projects the state will run out of ICU beds by Dec. 5.

Hospital leaders caution relying on bed counts to determine what the hospital system can bear, however.

“The bed availability is not the only thing that matters; it’s the staff availability, as well,” Suresh Gunasekaran, the CEO of the University of Iowa Hospitals and Clinics in Iowa City, said Monday. “I have no reason that the total number of beds is inaccurate. I think the question at the end of the day is, ‘Are all hospitals able to staff those beds, and are those beds of the right skill level to take care of the patients that are needed?’”

The availability of ICU beds must serve all patients, not just those infected with COVID-19.

In another media availability on Friday to announce that the Iowa City hospital was beginning the first phase of its surge plan, Gunasekaran said the hospital could double its count of ICU beds to 200 at the highest phase of its plan, but by that point, the situation would be dire.

“If COVID numbers in the state continue to rise unchecked, these may be only the first of many difficult decisions we will need to make over the coming weeks,” Gunasekaran added.

Reynolds said Thursday that hospital officials told her the growth in hospitalizations is unstainable. She implored Iowans to assess whether holiday gatherings are worth the risk to themselves, their families and their communities. Reynolds said small gatherings have spurred much of the recent growth in Iowa.

“When we do the case investigation right now, it’s coming down to gatherings — small groups,” Reynolds said. “I’m asking Iowans to think about it, to take precautions when we’re getting together, think about who can be impacted by not doing those simple measures we talked about.”

While she resisted calls to implement a statewide mask mandate, she said Iowans should be wearing a mask when in public. Reynolds also asked Iowans to social distance in public, get their flu shot, wash their hands regularly.

“We do those simple things, we’re going to start to see a difference,” Reynolds said.

Pressed on her continued reliance that Iowans will do the right thing to slow the spread — a message Reynolds has stuck with for months as Iowa rose to one of the nation’s top states for virus spread — Reynolds said that pandemic fatigue has caused Iowans to let their guard down. She implored Iowans to double down on COVID-19 mitigation strategies, which she said are small sacrifices that can make a positive impact.

{span}“I understand that many people are tired of living differently because of COVID-19,” Reynolds said. “But in the big picture, these are really small sacrifices, and they will help us manage the virus while living life. For the next three weeks, at least, I am asking Iowans to make every effort to help us stop the spread of COVID-19.”{/span}

“The illness burden in our community and our country is too high,” said Dr. David M. Williams, the chief clinical officer for UnityPoint Health. “And it’s time that we really buckle down and try to do something about it.”

There were 14 new deaths reported in Iowa on Friday. There were 8,121 new individuals tested and 1,251 new recoveries reported.

The coronavirus that causes COVID-19 is spread through respiratory droplets. It is often mild and some individuals remain asymptomatic or have only cold or flu symptoms. But the disease can be more severe, require hospitalization and lead to death, particularly in older or immunocompromised people.

Experts, including those at the CDC, say wearing masks when in public, keeping at least 6 feet of distance between people when possible, and good hygiene can prevent the spread.

The Ottumwa Courier relies on data reported by the Iowa Department of Public Health, using its coronavirus data dashboard at coronavirus.iowa.gov. Data is checked each day at 10 a.m. and then compared to the data previously captured from the dashboard to produce stories.

The state has changed how it reported the data several times, and local officials often produce data based on different standards or in different timeframes. Therefore, the data will not always align with other sources.

Those wanting to be tested can visit testiowa.com to schedule a test at the Ottumwa Test Iowa Clinic.

— Data from the Iowa Department of Public Health. Active cases and positivity rates are as of 10 a.m. Friday.