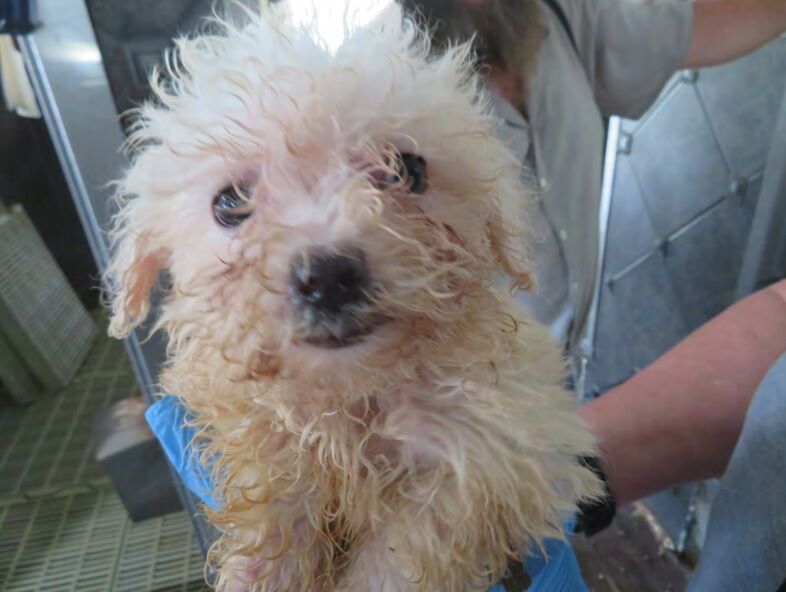 This ailing Bichon was found by federal inspectors inside a dog-breeding facility run by Daniel Gingerich. 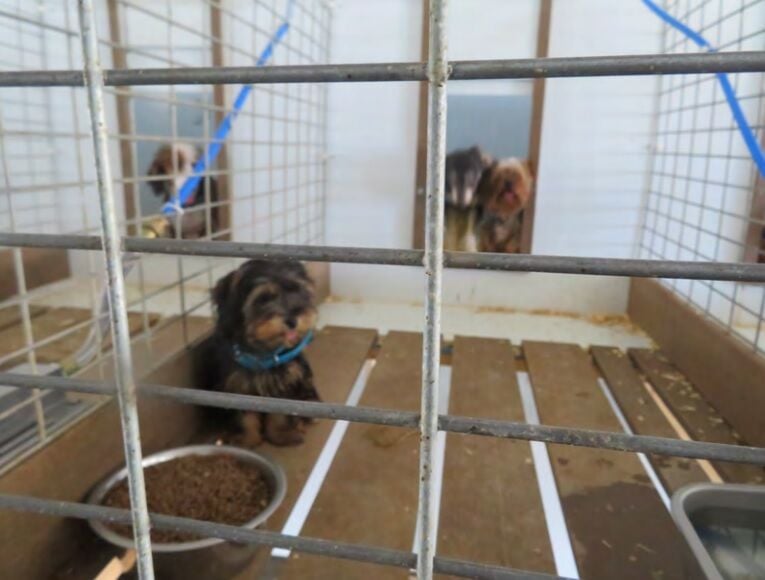 A puppy sits in an enclosure with open flooring inside a facility run by Daniel Gingerich.

This ailing Bichon was found by federal inspectors inside a dog-breeding facility run by Daniel Gingerich.

A puppy sits in an enclosure with open flooring inside a facility run by Daniel Gingerich.

“We are definitely looking at filing some criminal charges,” Sheriff Keith Davis said Thursday. “After reading the (federal inspectors’) reports, I believe some charges are warranted and that we are able to do that.”

Davis said he has been contacted by numerous individuals in recent days who are upset over Gingerich’s alleged failure to comply with animal welfare laws in running Maple Hill Puppies, which has several locations in Iowa, including two in the Wayne County town of Seymour.

“I’m getting hate emails and people on social media are threatening to string me up,” Davis said. “I’m doing everything I can, but there’s only so much we can do.”

The Iowa Department of Agriculture and Land Stewardship recently fined Gingerich $20,000 and suspended his Iowa license for 60 days. That action coincides with federal action in civil court, where a judge recently agreed to the U.S. Department of Agriculture’s request for a temporary restraining order against Gingerich due to numerous violations of the federal Animal Welfare Act.

The state and federal actions are based on USDA inspectors’ findings that Gingerich has repeatedly failed to meet minimum standards of care for several hundred dogs in his control. In the past two years, he has been cited for more than 100 violations of animal-welfare regulations.

The alleged regulatory violations, if true, would suggest that Gingerich is also guilty of numerous violations of Iowa’s criminal statutes pertaining to animal neglect, although those laws are rarely enforced.

“I am a little bit disappointed in the communication we’ve had with the regulatory agency, the USDA,” Davis said. “I wish the USDA had alerted us clear back in March, when they started working on this, that something was going on. The first we heard about it was the end of July. And so we’ve been working with the Iowa Department of Agriculture on this, supporting them and trying to get the situation taken care of for the health of the dogs. But, anyway, we were never provided with any inspection reports or anything like that. We just recently got those.”

Davis said he has consulted with both the state regulators and the county attorney and wants to make sure any criminal charges that are filed don’t conflict with the USDA’s pursuit of its civil case against Gingerich.

The sheriff said his office was unaware of any issues with the treatment of dogs by Maple Hill Puppies until the past few months. One reason for that, he said, is that Gingerich’s breeding operations are somewhat isolated.

“It’s an Amish family, and they live in an Amish community,” he said, referring to Gingerich. “And there’s nobody in that area – well, you know, it’s at the end of a dead-end road, and we don’t inspect dog breeders. The county doesn’t license dog breeders. So we would have had no way of knowing unless somebody had made a complaint.”

Federal court records indicate authorities have had difficulty this past week locating Gingerich, who appears to divide his time between his sister’s home in Ohio, where he now lives, and his Iowa dog-breeding facilities. As of early Wednesday, federal officials had yet to serve Gingerich with the temporary restraining order issued by the federal court on Sept. 28.

Davis said he’s not sure where Gingerich is.

“I believe there are several Amish communities that are very upset with what he has done because it has given them a black eye, and normally, you know, they are really good people to deal with and they take care of their stuff. So this this is something out of the blue for them, and they’re upset about it. I am sure if he shows up there, I will be getting a phone call.”

The order issued by U.S. District Court Judge Stephanie Rose gave Gingerich and anyone who works for him seven days to provide the U.S. Department of Justice with a “list of every location at which they have any dogs that are intended for breeding or sale,” as well as a complete inventory of all his animals, listing the breed, sex, age and unique identification number of each animal.

Lawyers for the Department of Justice notified the court yesterday that Gingerich had “not yet been served with the complaint and summons” in the case, but they were “making immediate plans” to do so.

State and federal records indicate Gingerich has been operating kennels or breeding facilities in 10 different locations throughout Iowa, including Redding, Lamoni, Seymour and Cantril. Although it’s not clear how many dogs Gingerich now owns, the records suggest that at one time, he had at least 1,000 dogs and puppies on hand.

Inspectors counted 675 dogs on Gingerich’s two Seymour properties during site visits this past summer. Dogs were exhibiting signs of heat stress and were panting and drooling, with some housed inside a barn where the heat index was measured at 112 degrees.

Dead dogs were found at both sites – some in the grass, outside, and some in kennels kept indoors. Gingerich allegedly hid some of his dogs inside an old horse barn on one of the properties. When inspectors went inside the barn, they found 27 dogs confined to “excessively dirty horse stalls” with no water present in their enclosures.

After those visits, the USDA gave Gingerich special permission to begin selling his dogs. According to state records, 53 dogs were given to another breeder, and roughly 250 dogs were moved to a Missouri facility to be auctioned.