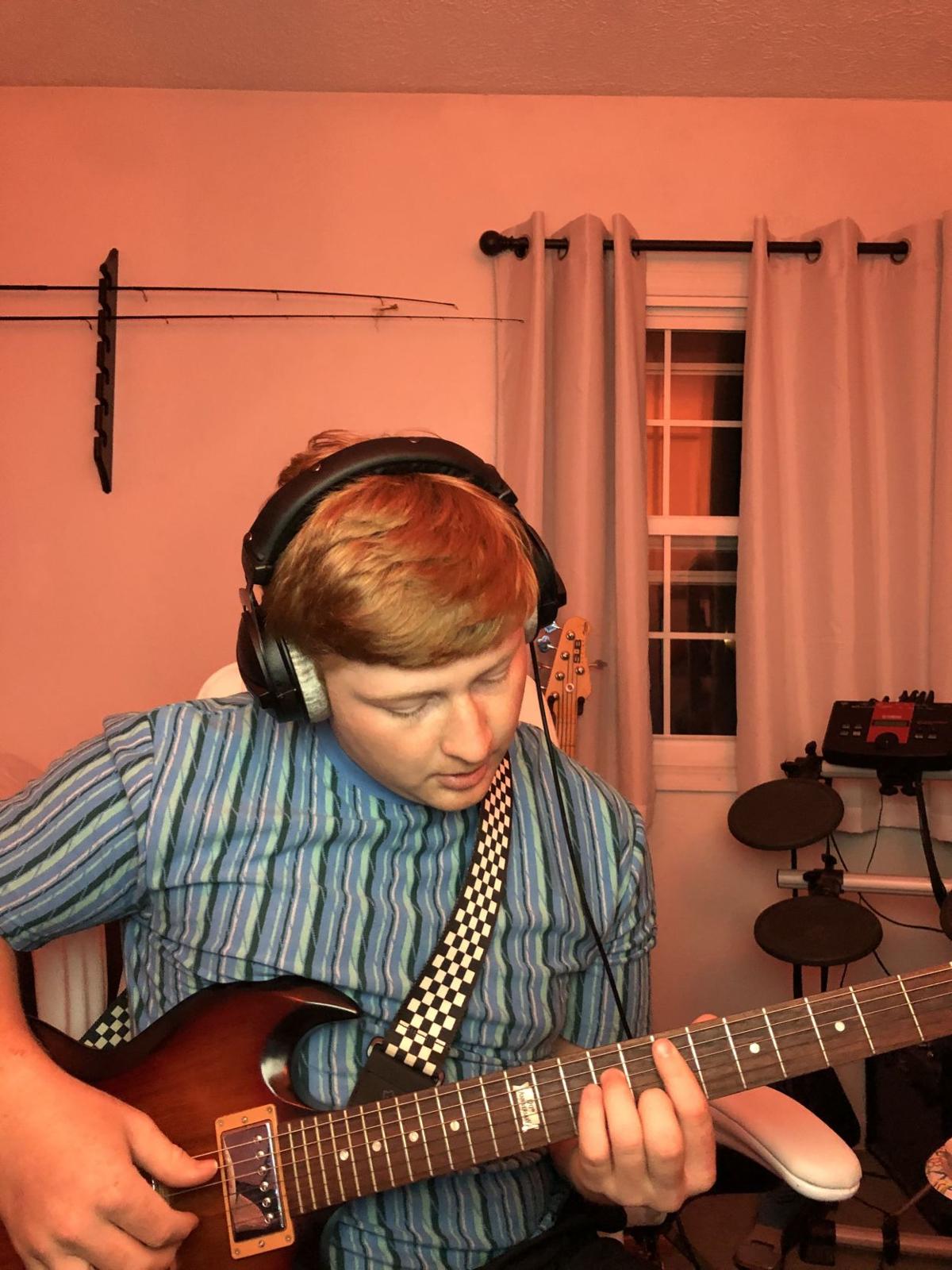 Each of Hunter Gullion’s tracks starts with a guitar. “A lot of people, when they think of electric guitar, they think of rock and roll,” he said. “That’s not at all what it is. You can do anything on a guitar.” 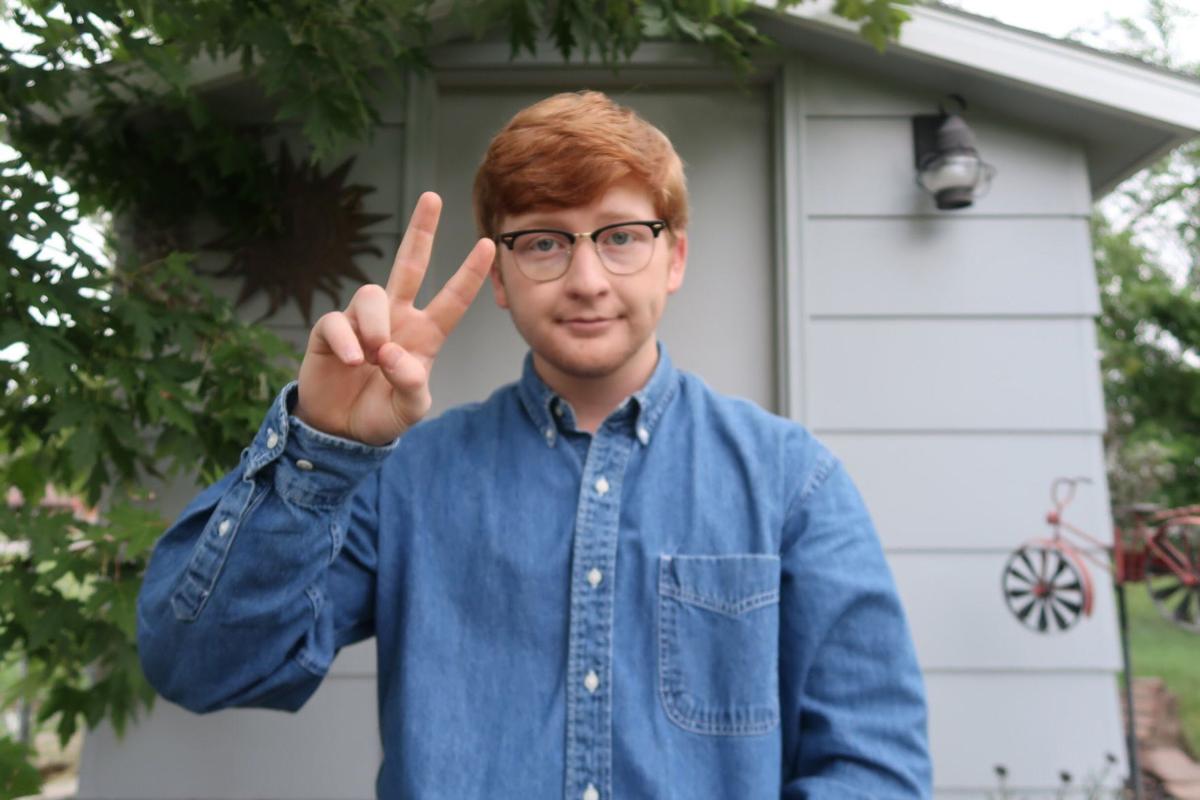 Hunter Gullion’s music crosses genre, and he said it doesn’t fit neatly into any category. But it seems to be finding an audience online.

OTTUMWA — In the past, the lack of a local music scene might have killed an aspiring musician’s career before it even started. The internet has changed all that. Young artists now have instant access to fans, distribution and collaborators.

But many still want to perform.

Hunter Gullion, a senior at OHS, struggled with this challenge. Despite a growing online presence, Ottumwa’s limited number of venues means his chances to perform are few and far between. Gullion said his music, which has traits of both rock and hip-hop, is even harder to market in a town where rock and country musicians dominate.

Gullion is known online by his stage name Yung Hunny. He doesn’t look like a stereotypical rapper. He wears no gold, no chains, and has no tattoos. When he speaks he does so quietly. Gullion looks, in fact, like every other kid his age. If you stuck him in a classroom or the Schaffer student section, he would simply disappear.

So when Gullion posted his song “I Don’t Wanna See You,” an emotionally vulnerable and introspective pop ballad, it took many who knew him by surprise. For one, it was a radical departure from the boisterous, sarcastic, skateboarding persona he previously presented. For another, few, if anybody, knew he harbored any musical talent or ambition.

“I thought I was gonna get bullied for it,” he said with a chuckle. “And I was like, whatever. Nobody’s gonna listen to it except for my friends.”

Instead, Gullion woke up the morning after the song went live with notifications flooding his phone. His friends had taken positively to it, as he’d expected, but there were also plenty of people he didn’t know very well posting it around.

Since that first song, Gullion has posted 10 others and a six-track EP called “The Hunny Tape.” He’s amassed 52,354 total plays on SoundCloud, and one song, “I’m not Ok,” has been listened to close to 14,000 times.

Gullion’s sound evades easy definition. While it could easily be classified under hip-hop, and he sometimes raps, he also sings and plays electric guitar. His lyrics often focus on themes like heartbreak and loneliness, or growing up in a town where there’s not a lot to do.

What can’t be denied is how catchy Gullion’s songs can be. His breakout tune featured the earworm verse: “Baby, tell me, why you gotta go? Tell me that you love me but I just don’t know.” When paired with Gullion’s vulnerable delivery, it quickly gets stuck in a listener’s head.

“A lot of my music is very emotional,” he said. “That’s what I love about music. I’m more cautious about talking about my feelings than I am making a song and having thousands of people listen to it.”

When asked if he considered himself a melancholy person, Gullion paused. His father’s dog, Bentley, snored beside him on the couch.

“Yeah,” he said. Then he laughed. “Yeah, a little bit.” He paused again and shifted on the couch. “I’ve always kind of struggled with mental health and stuff like that. I’ve never really had a lot of friends. I don’t wanna say I’m popular, but people know who I am. But it’s not like I have a lot of friends. There’s also a really big stigma for guys to not share their emotions, and I think that’s ridiculous. So it’s kind of my way of getting that off my chest or off my mind.”

Gullion described his musical influences as “a bunch of artists nobody’s really heard of,” but he also has a diverse range of tastes.

“Ever since I was like 5 or 6 I grew up listening to classic rock like AC/DC and Guns N’ Roses,” he said. “So in preschool and day care I’d have little rock bands with my friends and we’d play air guitar and stuff like that.”

This early fascination with music led to Gullion’s parents getting him a toy guitar when he was 6 years old. While hobbies and interests of young children often fade away, Gullion took the guitar everywhere and played it around the house as often as he could. So his parents got him a full-sized guitar and enrolled him in lessons.

When he was in fifth grade, Gullion joined percussion, which taught him about drums and rhythm. He’d always dabbled with recording music by putting rudimentary tracks together with the voice memo app on his phone, but the spark didn’t light until he got to high school. Gullion took a course called “Music and Tech” at OHS in which students were taught how to use the audio editing software Garage Band.

“The first three songs I made were made on an iMac at OHS,” Gullion said.

Most of his attempts never saw the light of day. While “I Don’t Wanna See You” was the first he put out to the public, Gullion said he has somewhere around 20 or 30 songs that were created before that he never plans to release.

“I was just putting random melodies together with drums, but I had no idea how to put it together to make it structured the right way,” he said.

So he turned to the internet, a source of much of his learning and inspiration. He watched a YouTube video which taught how to construct a beat, and the very first song he put together after was “I Don’t Wanna See You.”

Now Gullion makes all his music in his bedroom. Three-quarters of the room is set aside for this purpose, occupied by a full electric drum kit, two guitars, speakers, a microphone and a desktop computer where he does all his mixing.

Each composition typically starts with the guitar.

“[Guitar] is starting to come back, which I’ve noticed a lot in the underground hip-hop culture,” he said. “A lot of people, when they think of electric guitar, they think of rock and roll. That’s not at all what it is. You can do anything on a guitar.”

From there, Gullion starts layering in some structure with drums and vocals.

“All you really need in a beat is a melody, snare, hi-hats and a kick. That’s the whole song,” he said. “But I like to fill it out a lot more to give it just more depth and more body, and it’s not necessarily filling it out, it’s giving it more elements.”

While some of Gullion’s songs have been done in collaboration with other artists, whether local or people he’s met over the internet, the overwhelming majority of his songs are done entirely by him. Lyrics, production and performance. And he’s always tinkering. Gullion said he likes to listen to a song he’s working on in the car so he can spot what he wants to change and see how it sounds outside the studio.

He had one already near completion on his computer, which he pulled up and played. It sounded like something he’d pulled off the radio rather than something a high school senior had mixed in his bedroom.

But where to play?

The problem is that, apart from plays over the internet, there’s not much of a home for Gullion’s music. Opportunities for performance are few. His first live show, scheduled for Oct. 18, will be held at the Eagles Club.

According to Gullion, the music scene for younger people in Ottumwa is small, and that’s especially true for artists interested in making hip-hop. Consequently, learning from locals, collaborating with locals, and finding local venues to perform is difficult.

“It’s really kind of sad, honestly, because nobody really pursues music apart from marching band,” Gullion said. “I have a friend that’s in a band here in town, but that’s the thing, nobody does that type of thing anymore, nobody really does bands.”

But it extends beyond Ottumwa. Outside of a few small budding scenes in Iowa City and Des Moines, there’s not much of a home in Iowa for artists with Gullion’s style.

“That’s one thing I hate,” he said. “All the artists that I listen to, when they go on tour they’ll literally go from Lincoln to Minneapolis to Chicago to St. Louis and they’ll literally do a loop around Iowa.”

Gullion is dedicated to nurturing a local music scene for people his age. He spoke while wearing a Good Devils T-shirt, a local band. He spoke favorably of other local groups like TV Cop and his friend’s band UNCLE. He goes to their shows, and he listens to their music.

On the other hand, he seems frustrated with the scene. One of his most popular songs, entitled “O’Town S—“ talks about endlessly driving around town, or laying around, and having nothing much to do.

While in the past this might have been the death blow to an aspiring musician, the internet has changed what success can look like for young performers. Out of Gullion’s 52,354 plays on SoundCloud, 40,654 came from outside Ottumwa. In place of mentors, he has YouTube tutorials. He’s been able to collaborate with artists living outside Iowa, including one from New York. It seems like one could have the best of both worlds: a local music scene and broader success via the internet.

And Gullion’s characterization of the town as having no scene for people with his style may not be totally accurate.

“There is a scene for it,” said Shiloh Seim, manager of the Market on Main.

While the Market on Main’s Friday nights are typically set aside for more laid-back programming, music people can listen to in the background while they network, their Saturdays are open to performers of every genre. The Market has hosted blues, metal and jazz performers. Last year they had a show with four female hip-hop artists. In her estimation, the Market’s hosted three other hip-hop performers in the last two years.

So while the scene is certainly small, it isn’t nonexistent. Seim said artists who have performed at the Market in the past are more likely to be scheduled simply because she already has their contact information. A problem for some venues is that their programmers simply don’t know what artists are out there unless the artists contact them first.

Nevertheless, Gullion’s quite restrained about the situation.

“I’m more of a realist than an optimist to be completely honest. The chances of me blowing up and popping off are really slim to none,” he said. “It’s hard to judge coming from a small town. A lot of people that are my age, that are my demographic, people 13-25, there’s not a lot of that in Ottumwa. So it’s hard to do shows and get my stuff out there and get people to see what I have.”

In the meantime, Gullion says he plans to continue making music. While a follow-up project to “The Hunny Tape” is in the works, he says he wants to get more established in the Des Moines and Iowa City scenes before releasing it.

His first live performance will be 7:30 p.m. Oct 18 at the Eagles Club in Ottumwa. He will be opening for another local band, UNCLE. There will be a $5 cover charge.

Jack Langland can be reached at jlangland@ottumwacourier.com.