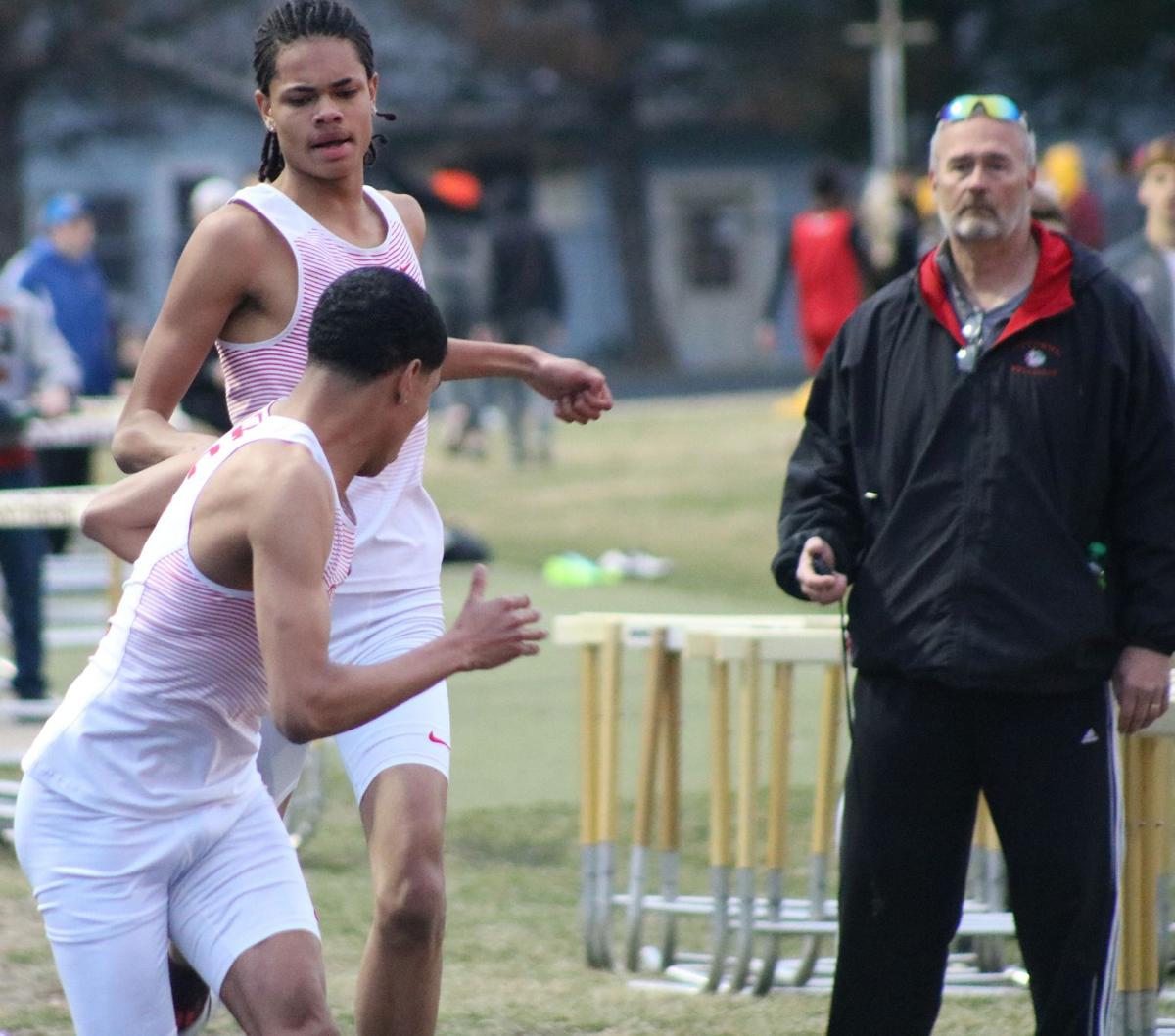 Ottumwa head boys track and field coach Jim Nickerson (right) watches on as Dante Salomon hands off the baton during a 4x800 relay win for the Bulldogs last March at the Mount Pleasant Relays. The Ottumwa boys hope to return to the track on May 1 after the Iowa High School Athletic Association and Iowa Girls High School Athletic Union released revised spring sports schedules should school re-open on May 1. Track and field, soccer, tennis and golf has all been on hold during statewide school closures back in March in an effort to mitigate the spread of the coronavirus. 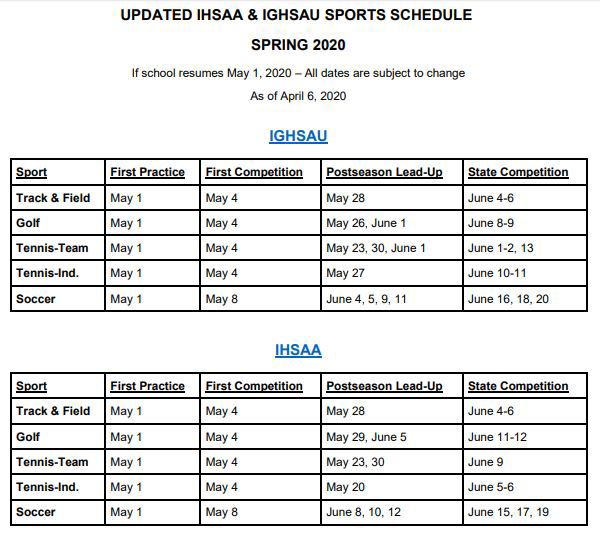 Ottumwa head boys track and field coach Jim Nickerson (right) watches on as Dante Salomon hands off the baton during a 4x800 relay win for the Bulldogs last March at the Mount Pleasant Relays. The Ottumwa boys hope to return to the track on May 1 after the Iowa High School Athletic Association and Iowa Girls High School Athletic Union released revised spring sports schedules should school re-open on May 1. Track and field, soccer, tennis and golf has all been on hold during statewide school closures back in March in an effort to mitigate the spread of the coronavirus.

OTTUMWA — Opinions vary when it comes to the prospect of Iowa high school spring sports seasons taking place in 2020.

With the fluid threat of the coronavirus, which has already impacted the day-to-day life of so many around the world, coaches like Ottumwa girls track and field’s Jim Schlarbaum has been left with few answers even as the Bulldog student athletes text him questions every day in hopes of salvaging a season.

“I get messages every day. Both Alli and Grace messaged me last Thursday and both asked me to be honest about what I thought,” Schlarbaum said, referencing the chances of the spring sports season being canceled. “I know what they’re thinking. I know our team felt like it had a good chance of performing well. We were positioned to come out of nowhere and possibly take home one of those top three team trophies from the state meet.

“With the conversations I’ve had with some of the coaches in Des Moines, I’ve asked some of the same questions our kids are asking me. The feeling I’ve gotten from some of those coaches is it’s not looking good.”

That was last Thursday, the same day that the closure of all schools across the state was extended until April 30. Both the Iowa High School Athletic Association and Iowa Girls High School Athletic Union, however, gave coaches and athletes across Iowa a glimmer of hope announcing a revised schedule that would allow at least a portion of high school track and field, golf, soccer and tennis to play out culminating with state tournaments being held in June for each and every sport.

So, for now, high school student athletes across the state have something to continue working for with the dream of winning state titles alive. Officials are hoping the social distancing measures put in place across the state, including the closure of schools, will mitigate the spread of the coronavirus leading to a peak in the number of cases and, by May 1, a decline in the threat that will allow schools to re-open, putting spring sports back in action for the start of regular-season competition on May 4.

“It would be great for the kids for it to be safe enough for them to go back to school and have even a portion of the season,” Jim Nickerson, who is set to retire as Ottumwa head boys track and field coach after this season, said. “There were so many kids on our team that were so disappointed thinking they wouldn’t get to complete their season of track and field. So many of them did so well in the Dickinson Relays (the only meet thus far the Ottumwa boys have competed in). They were pumped up to try to make a run at winning another (CIML Metro) conference title and it all just got shut down in an instant.”

Schlarbaum first heard the news on Monday from members of the OHS girls track and field team, showing the enthusiasm that has come with the renewed possibility of getting back to compete together as a team next month.

“Emma Weilbrenner sent me an e-mail with the screenshot of the schedule,” Schlarbaum said. “She was very excited. I hadn’t heard anything about the outcome of the (joint IHSAA and IGHSAU) meeting, so it was a very pleasant outcome.”

The revised schedule would give track, golf and tennis teams just three days starting on Friday, May 1 to practice if any teams want to get back into regular-season competition on the first official day. Soccer will have a full week with competition not scheduled to begin until May 8 at the earliest.

Neither the IGHSAU nor IHSAA set either maximum or minimum number for dates for competition within this adjusted schedule. Schools can schedule as many meets, duals and matches before their respective postseason dates as possible.

Schools will have the option, based on availability of teams and locations, to either reschedule competition dates that were lost in April or come together on new matchups with schools. In other words, schools throughout the state are responsible for setting up their new regular-season schedules with the state providing dates for the start of postseason competition, including state tournament dates for all sports.

“I reminded our girls to maintain a positive focus and keep working hard with their workouts that they’re being given because we want to jump right in and not miss a beat,” Schlarbaum said. “Hopefully, our goals can still be made. I know the team is anxious to get back together and have the camaraderie as well as a team atmosphere that will, hopefully, get us ready to do some really special things.”

The quickest turnaround for all high school spring sports will be boys tennis, with the regular season starting May 4 and the first postseason event (singles and doubles district tournaments) taking place on May 20. District and regional team and individual tournaments for tennis and golf will begin over the course of the next week with the state-qualifying track and field meets throughout the state being held on Thursday, May 28, less than four weeks what would be the return date for teams after six weeks without an official practice.

“For all athletes, it will be a huge change,” Nickerson said. “There’s only so much you can do by yourself. You need to be trained by a coach and pushed every day in practice. All of that time, plus all the meets they miss out on competing in, will have a huge impact on the conditioning of the athletes.

“You can’t expect the times to be as good as they might have been if we had trained and competed throughout March and April. However, everyone is in the same boat. The kids just want to compete and it’s a fair competition with everyone having the same amount of time to properly train.”

One obstacle to the revised spring sports schedule is that it will conflict for several additional weeks with the baseball and softball schedules, which remain unchanged with the first practices scheduled for May 4 and the first games scheduled to be played on May 26. Nickerson’s youngest daughter, Kacy, is one of several athletes across the state that will have to balance potentially multiple sports with both postseason track and field meets coming in the middle of the first two weeks for the softball season.

Nickerson and Anne Guest, one of Ottumwa’s starting outfielders, both reached 5 feet on high jumps earlier this season with Guest looking to make it to state in the 4A girls high jump for the third straight year. Jesus Jaime, a key cog to John Jaeger’s OHS baseball lineup, showed tremendous potential for the by reaching 50 feet in the shot put at the Dickinson Relays in March.

“I don’t think there will be too much conflict there. All the coaches do a great job working together to do what’s best for the kids,” Jim Nickerson said. “Obviously, the kids can finish up whatever they’ve got lined up for the spring and they can still practice baseball and softball before the seasons start afterwards.

“We’ve had to overlap anyway because we have so many kids that do multiple sports. I know Kacy’s planning to long jump and then head into softball.”

Nickerson, however, is wary that even the best-laid plans of salvaging a high school season, be it spring or summer, could still go awry. Thus is the new uncertain landscape of the world locked in fighting off COVID-19.

“It’s still up for grabs. We don’t know what this virus is going to do in the next month or so,” Nickerson said. “We might be getting our hopes up high and not be able to get back to sports until June or July. No one sees the future.

“I told my kids all way back in March to stock up for the long haul. We didn’t know where this was going to go and we’ve never been through anything like this before. Whether we can even get back to school, putting 1,200 kids back in a building with what we currently know is taking quite a risk. They’ve got to make sure is safe enough where people aren’t going to be harmed by it. I wouldn’t want to make that call.”

If there’s one team that might actually thrive in this sort of environment, it might be the Ottumwa track and field programs. With school facilities closed, Bulldog student athletes are in a familiar position having competed throughout the 2018 season while renovations were taking place at Schafer Stadium, leaving the team without a home track to work out on.

“Look at the kids that we had step up that year. Our boys went out and won the conference title. Several kids on both teams qualified for state,” Nickerson said. “There were kids that couldn’t high jump or long jump in practice that went out and performed really well in those events.

“It can be done, even in a condensed period of time. I don’t think it will affect the kids mentally. They’re going to be so pumped and ready to go, it will be hard to keep them from competing.”