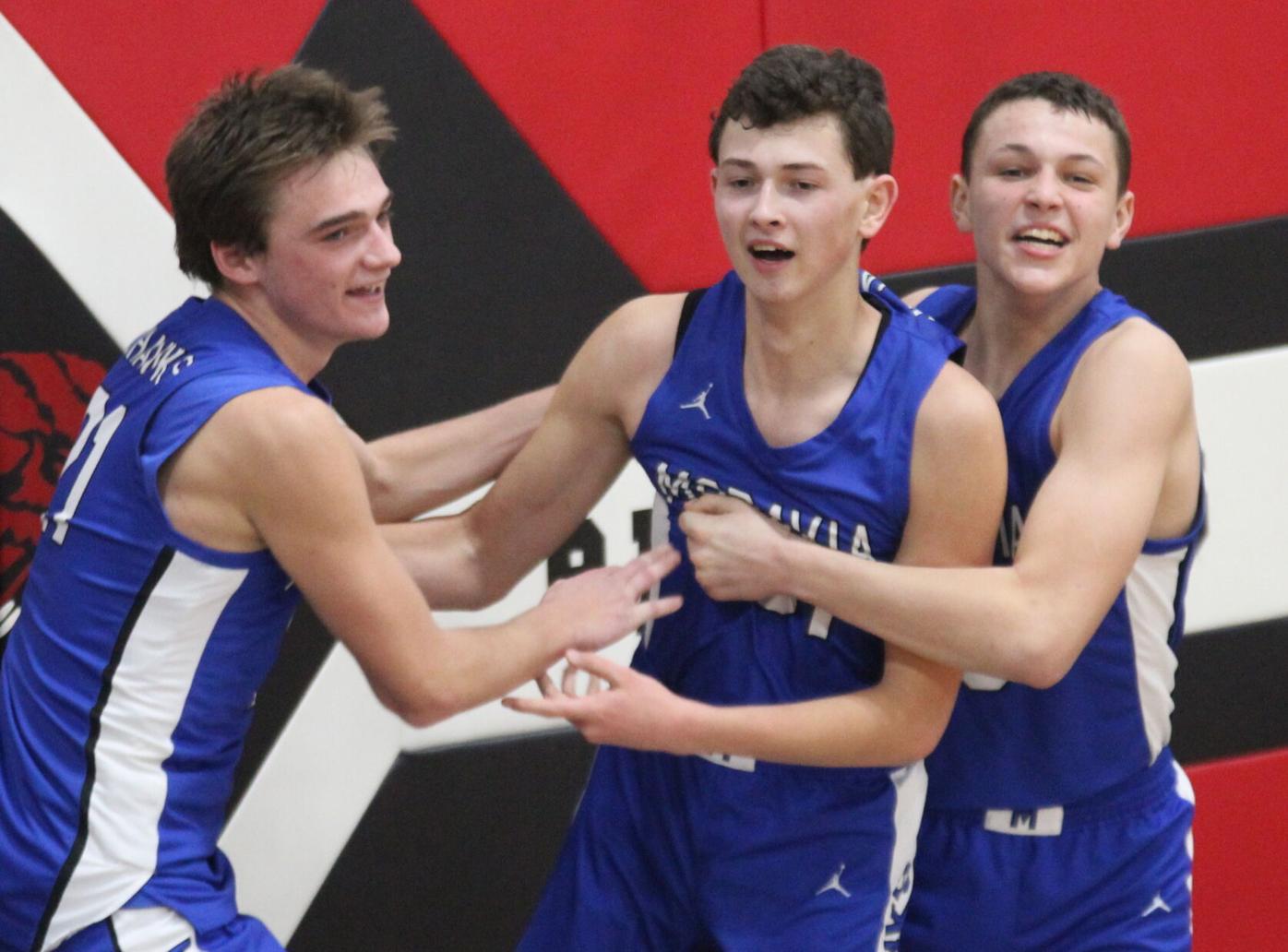 Carson Brown (middle), seen here celebrating with Moravia teammates Chace Hamilton (left) and Shane Helmick (right) after a 62-58 overtime win over Centerville at Lakeview Gymnasium on Jan. 2, was named captain of the 2020-21 All-Courier boys basketball team after leading the Mohawks to 19 wins finishing as the state's fourth-leading scorer with 559 total points. 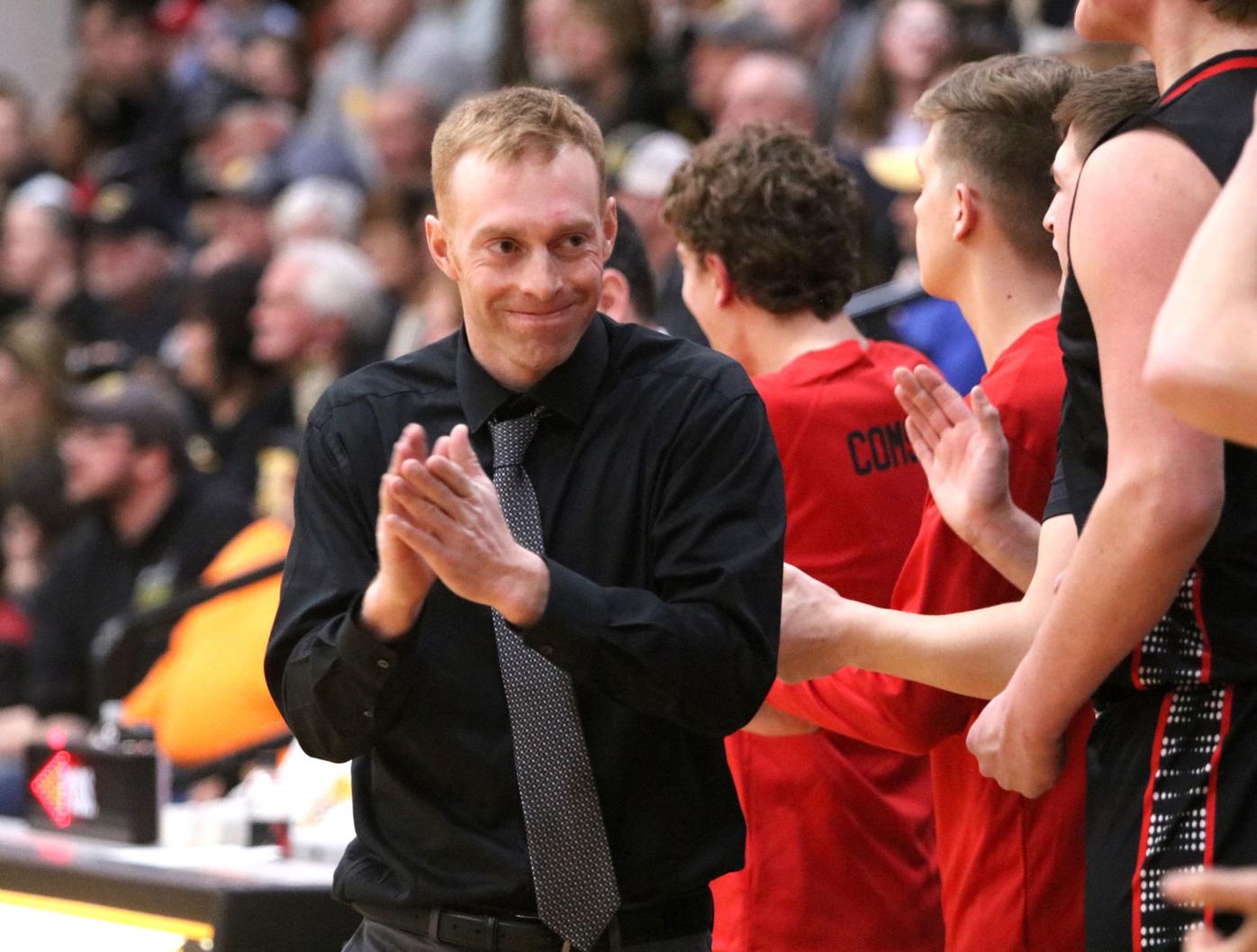 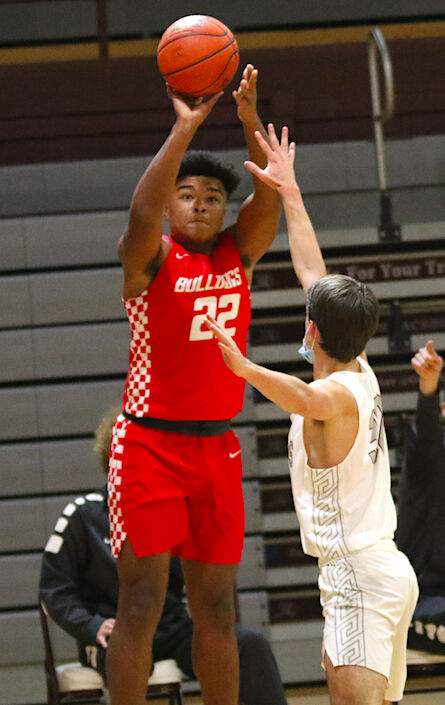 Carson Brown (middle), seen here celebrating with Moravia teammates Chace Hamilton (left) and Shane Helmick (right) after a 62-58 overtime win over Centerville at Lakeview Gymnasium on Jan. 2, was named captain of the 2020-21 All-Courier boys basketball team after leading the Mohawks to 19 wins finishing as the state's fourth-leading scorer with 559 total points.

OTTUMWA – There were high expectations heading into the high school boys basketball season.

Meeting those expectations a lot of hard work, and a lot of luck to see the season to the end.

While the goal of qualifying for the boys state basketball tournament narrowly eluded several teams, the 2020-21 basketball season ended with two teams ranked in the top 10 (Pekin and Ottumwa) and two conference champions (Albia and Pekin). The Ottumwa Bulldogs posted their most successful season in 17 years, winning seven of their final eight games to finish 16-6, while both Albia and Moravia posted an area-best 19 wins with the Blue Demons coming within one win of a state tournament berth, falling 43-35 to third-ranked Des Moines Christian in the 2A substate semifinals.

The face of the turnaround for the Ottumwa boys basketball program capped his final season for the Bulldogs on the hardwood helping lead OHS to 16 wins, the most since the program's last state tournament appearance in 2004. The first-team all-CIML Metro conference selection finished third in scoring average (18.5) and scored the second-most points of any Metro player with 351 total points, eclipsing 1,000 career points during the course of the season. Swartz also tied Des Moines East freshman Tyron Wright for the most blocks in the Metro with 24 and led the conference with 131 made field goals, including the third-most made 3-pointers (42), and was second to Des Moines North senior Diondre Taylor with 265 total field goal attempts.

Chance, like Swartz, crossed the 1,000-point career scoring milestone, helped lead the Blue Demons to a perfect 12-0 run to the South Central Conference title and a second straight district title with an all-around successful floor game. Chance led the conference in total assists (119) and was top-five in the SCC in total points (322), total steals (42), made 3-pointers (32) and 3-point attempts (99). Chance was second in the SCC in made free throws and attempted free throws (92-132), coming up with several key plays that helped Albia finished with a winning record for the fourth straight year. In four years, Chance was part of 62 wins in 87 games, including a 19-3 record this past season.

The 2021 All-Courier captain was the top all-around player in the Bluegrass Conference, leading the Mohawks to the best record in nearly two decades as Moravia finished 19-5, posting runner-up finishes in both the Bluegrass regular-season standings and regular-season tournament. Brown was the third area player to eclipse 1,000 career points and was one of five players to be unanimously selected to the Bluegrass Conference first team, finishing fourth in Class 1A with 559 total points scored this season while also leading the Bluegrass with 158 total rebounds and effective field goal percentage, making 64.7 percent of his effective shots.

So far in his senior season at Pekin, Millikin has been all-state all the time following up a top-10 run this fall in the Class 1A boys state cross-country meet by earning third-team Iowa Print Sports Writers Association third-team all-state honors. Millikin helped lead the Panthers to a third consecutive Southeast Iowa Superconference north division title, scoring 14.9 points per game while dishing out 5.8 assists, 5.4 rebounds, 2.4 steals and joined OA-BCIG senior Cooper DeJean as one of most efficient guards in Class 2A as the only two guards to average less than two turnovers a game.

Long edged out Millikin as Pekin's top scorer this season, averaging 15 points a game while making a team-leading 5.6 field goals per game this season. Long was second in the Southeast Iowa Superconference's north division with 42 made 3-pointers, finishing fourth in the division making 39.3 percent of his shots from beyond the arc and led the conference shooting 82.5 percent from the free throw line.

While it was Albia that completed a perfect run to a second straight South Central Conference title, it was Davis and the Rockets that might have established themselves this season as the team to take over the crown as early as next season. Davis finished third in the SCC in scoring, averaging 16.8 points a game and averaged a double-double after leading the conference with 10.1 rebounds a game. Davis also made a conference-best 7.4 field goals and collected a conference-best four offensive rebounds per game.

The progression of Blake's younger brother, Drew, continued this season as the unanimous first-team all-conference selection edged his older brother out in total scoring, 330-322, while shooting a team-best 55.5 percent from the field. The younger Chance led the Blue Demons in creating second chances, collecting 47 offensive rebounds while leading Albia averaging 15 points and six rebounds a game.

Greiner’s play this season helped the Comets post its first winning season under head coach Mike Strasko, doing so in a season that began with the loss of junior starter Landon Becker to a season-ending knee injury. Greiner led the team in scoring with 253 points, averaging 12.3 points a game (second only to Becker's two-game 16.7 ppg average), assists per game (3.0) and an SEI south division-best 60 steals earning first-team all-Superconference South Division honors for the second straight year.

The youngest member of the All-Courier boys basketball team had a breakout season on the hardwood for the Trojans. Weaton earned third-team Class 3A IPSWA all-state honors. After finishing sixth in 3A averaging 19.6 points per game and fifth in 3A in rebounding, averaging 9.2 boards a game.

It was a season of high expectations for several area high school basketball teams. The Panthers did not disappoint, spending more weeks ranked among the top 40 teams in the entire state than any other area squad. Swanson has guided Pekin to incredible sustained success over the past three years as the Panthers have won three consecutive SEISC north titles as well as a Class 1A district championship in 2020 going 51-12 over that three-year span.