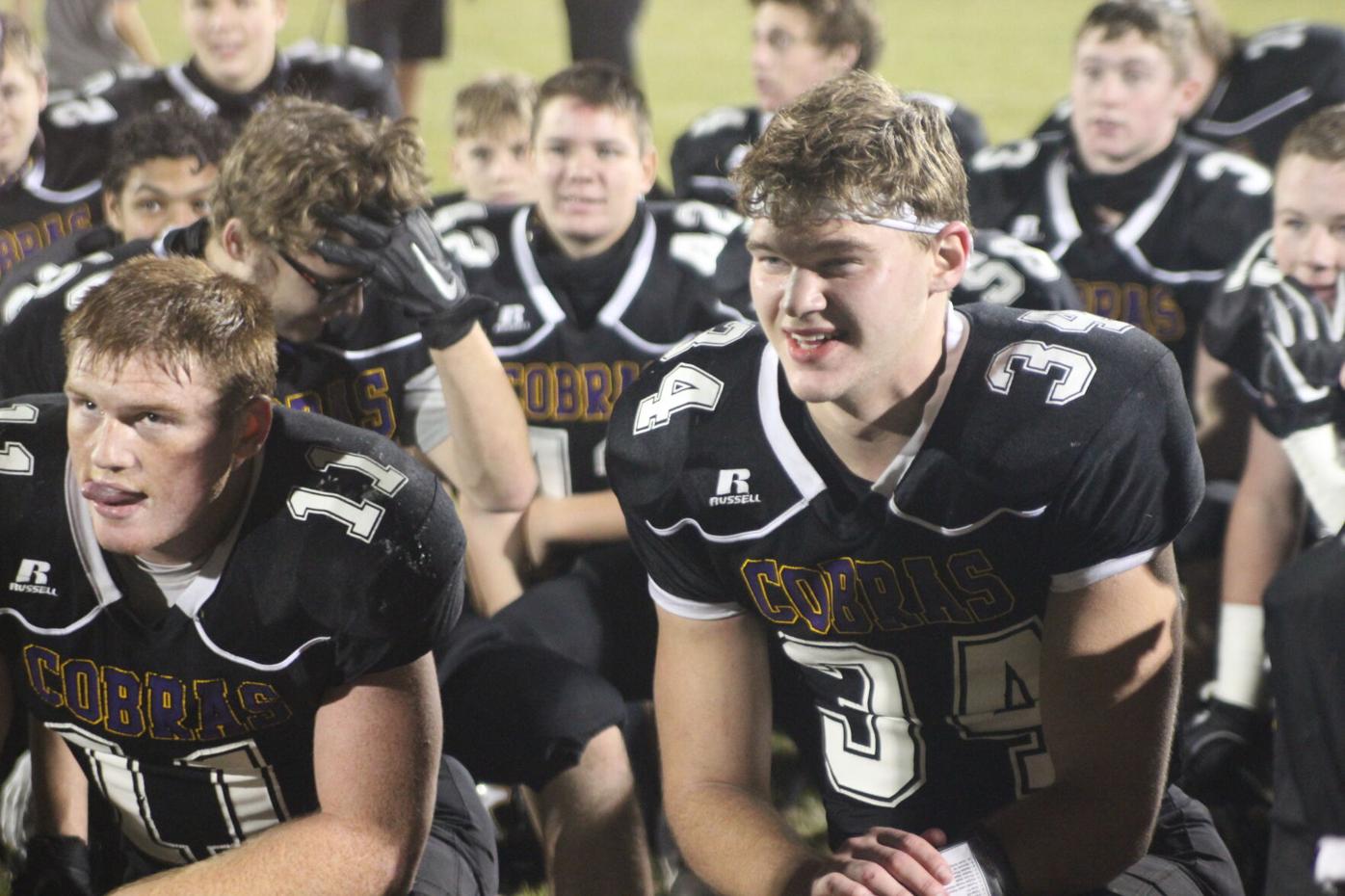 Sigourney-Keota teammates Sam Sieren (11) and Brady Duwa (34) join the rest of the Cobra football team in celebrating at Cobra Field in Sigourney after clinching a trip to the UNI Dome for the Class 1A state semifinals following a 35-32 win over Columbus Catholic on Nov. 6. 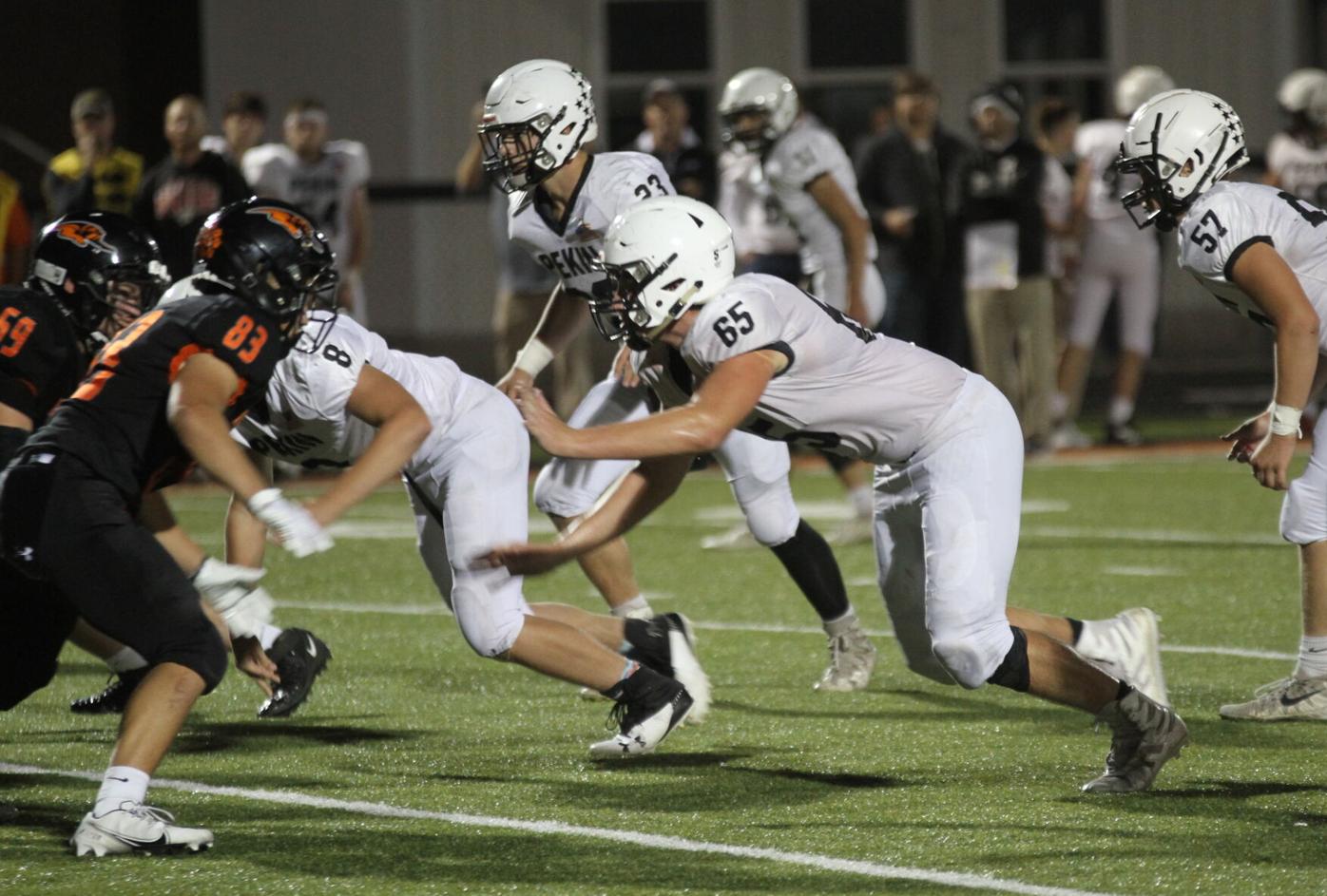 Pekin senior Cael Lyle (65) protects the line for the Panther football team during action at Mediapolis on Sept. 19. 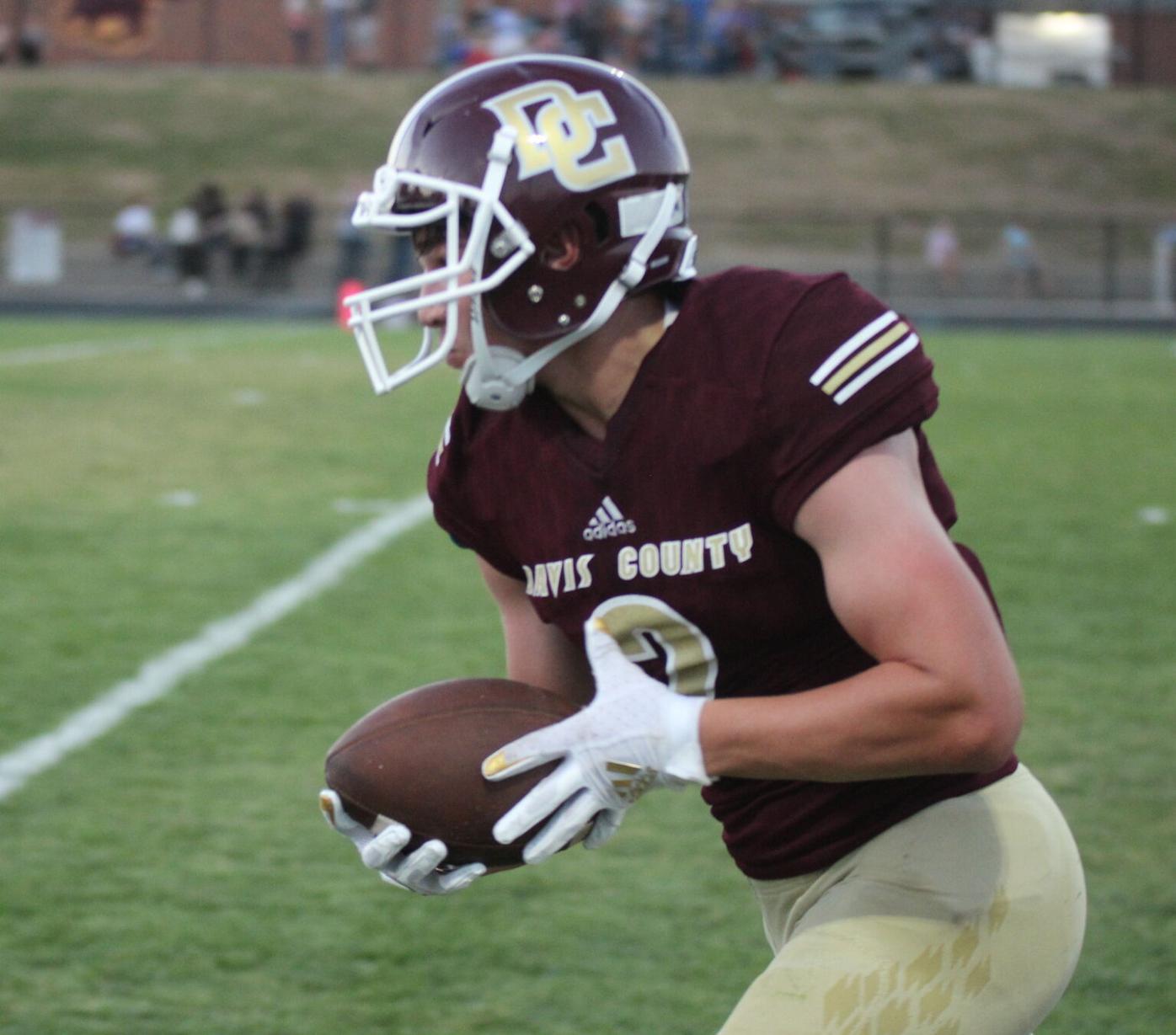 Sigourney-Keota teammates Sam Sieren (11) and Brady Duwa (34) join the rest of the Cobra football team in celebrating at Cobra Field in Sigourney after clinching a trip to the UNI Dome for the Class 1A state semifinals following a 35-32 win over Columbus Catholic on Nov. 6.

Pekin senior Cael Lyle (65) protects the line for the Panther football team during action at Mediapolis on Sept. 19.

When it came to moving the football down the field, area teams found multiple ways to find positive yardage.

Sigourney-Keota became the first area team in five years to play in the state semifinals, earning the coveted trip to the UNI-Dome by grinding out yards on the ground. The Cobras were hard to stop when the chips were down, racking up 1,368 rushing yards in four postseason games including a game-clinching 11-play, 63-yard drive that ate up most of the fourth quarter and led to a decisive touchdown in a 35-32 state quarterfinal win over Columbus Catholic.

While the single-wing attack of S-K produced another 3,000-yard rushing season, the Cardinal Comets found success this season through the air producing a signature season under head coach Landon Miller. Cardinal produced a winning record of 5-4 that included the first win in nearly five full decades over Pekin, the program's first postseason win, with almost 2,000 passing yards and 21 passing touchdowns thrown by a pair of quarterbacks with Blaine Bryant filling during a three-game stretch, leading the Comets to a pair of wins with six touchdowns passes against Louisa-Muscatine and Wayne.

Ultimately, teams had to be versatile in order to succeed.  Cardinal's first postseason win over Pekin was clinched by junior quarterback Maddux Jones, who passed for 15 touchdowns including six in the season opener against Columbus, rushing 21 yards for a score to seal a 38-29 win over the Panthers. Sigourney-Keota, meanwhile, mixed in 14 passing touchdowns and five touchdowns on special teams to produce one of Class 1A's most potent all-around offensive attacks during their 10-1 campaign.

“That’s something we’re getting more comfortable with as the season goes on,” said S-K senior Brady Duwa, the 2020 All-Courier team captain. “We’re starting to gain some confidence whether it’s me, Cade Striegle, Wyatt Sieren or any of us that are comfortable running the routes. Our offensive line deserves a lot of credit. They’re giving our quarterbacks the time to roll out, dot us up perfectly. Both Cade and Colton (Clarahan) are putting the football exactly where it needs to be.”

Chance returns as the All-Courier quarterback for the second straight year after once again racking up district-leading 17 touchdown passes and led all area signal callers with 1,200 yards passing. The 6-foot-4 all-district quarterback saved the best for last by shining in the regular-season finale at Ironman Field, throwing for five touchdowns and 237 yards in a 34-26 win over Saydel that helped Albia clinch its first home playoff game in five years. Chance finished his career throwing for completing 377 of 737 pass attempts for 5,134 yards and 59 touchdowns as a three-year starter for the Blue Demons.

Sieren follows in the footsteps of former All-Courier captains J.D. Stout and Peyton Crawford as one of the state top rushers. Returning to the All-Courier team after making it last year as the utility selection, Sieren established himself this season in the backfield improving from 1,122 yards and 13 touchdowns last year leading S-K's rushing attack during a 10-1 season that ended with a trip to the Class 1A state semifinals. The Cobra senior racked up the second-most rushing yards in 1A with 1,706 and led all of 1A with 25 rushing touchdowns, including 13 scores in four postseason games.

There is once again a Backyard Brawl feel to the All-Courier backfield as Jones and Sieren follow Stout and Dayne Eckley as the two top rushers in the area. Jones narrowly missed out on a 1,000-yard season of his own, finishing with 935 yards, third-most in Class 1A, District 6 on 143 carries with four touchdowns including a 234-yard season-opening effort in a 37-31 win at Central Lee and an impressive 143-yard night at Mediapolis in the wake of a coronavirus outbreak that left the Panthers short-handed.

Smithart was one of six lineman named first-team in Class 1A. The S-K junior helped open doors for the Cobras, who racked up 3,489 total rushing yards, the fourth-most in the entire state and the most of any 1A team.

Moffit joined Smithart in earning all-state honors for the Cobras, earning a place on the Class 1A third team. With Moffit and Smithart helping lead the way, S-K racked up the most rushing touchdowns of any Class 1A team with 45 on the season and the second-most all-purpose 1A yards with 5,268.

Like so many of his Warrior teammates, Bainbridge had to embrace versatility by playing multiple positions on the field. Bainbridge earns a spot on the All-Courier team as the starting center for the Warriors, but also led Van Buren County on defense with 54 total tackles including 31 solo stops with one sack while earning all-state honors as a punter averaging 40.2 yards on 26 total punts this season.

Pekin may not have had one of their finest performances this season, but the running game managed to still produce over 2,000 yards once again this season. Lyle, followed up a first-team all-district junior season by earning second-team all-start honors this season and was once again the backbone to a line that paved the way for 18 touchdowns on the ground.

Clark earned second-team all state honors in Class 2A for his play on the offensive line for the Big Reds. Centerville overcame an 0-2 start to the season, finishing 5-4 including a postseason win over Chariton while racking up a nearly-even split of their 2,719 total yards of offense, collecting 1,416 passing yards and 1,303 rushing yards with Clark starting at offensive tackle.

Griffin was once again of the more explosive outside receivers in the area, improving on his All-Courier totals from a season ago. The second-team all-state receiver catching 35 passes for 652 yards and 10 touchdowns after hauling in 26 passes for 535 yards and five touchdowns as a sophomore. Greiner led Class 1A, District 6 in receptions and receiving yards while sharing top district honors for touchdown receptions with Mediapolis senior Logan Thie, helping the Comets finish with a winning 5-4 record that included a postseason win at Pekin.

Weaton earned third-team all-state honors in Class 3A, leading the Trojans with 377 yards receiving on 30 receptions. The sophomore tight end shared top honors in 3A, District 5 with seven touchdown receptions, including what proved to be a game-winning touchdown catch late in the first half of Fairfield's only win, a 15-7 season-opening upset of Knoxville.

Another versatile selection as Clarahan threw five touchdown passes, racked up over 300 yards of offense and led the Cobra defense with 54.5 total tackles. No area kicker scored more points than Clarahan, who made 47 extra points and had an area-best seven touchbacks on kickoffs this season.