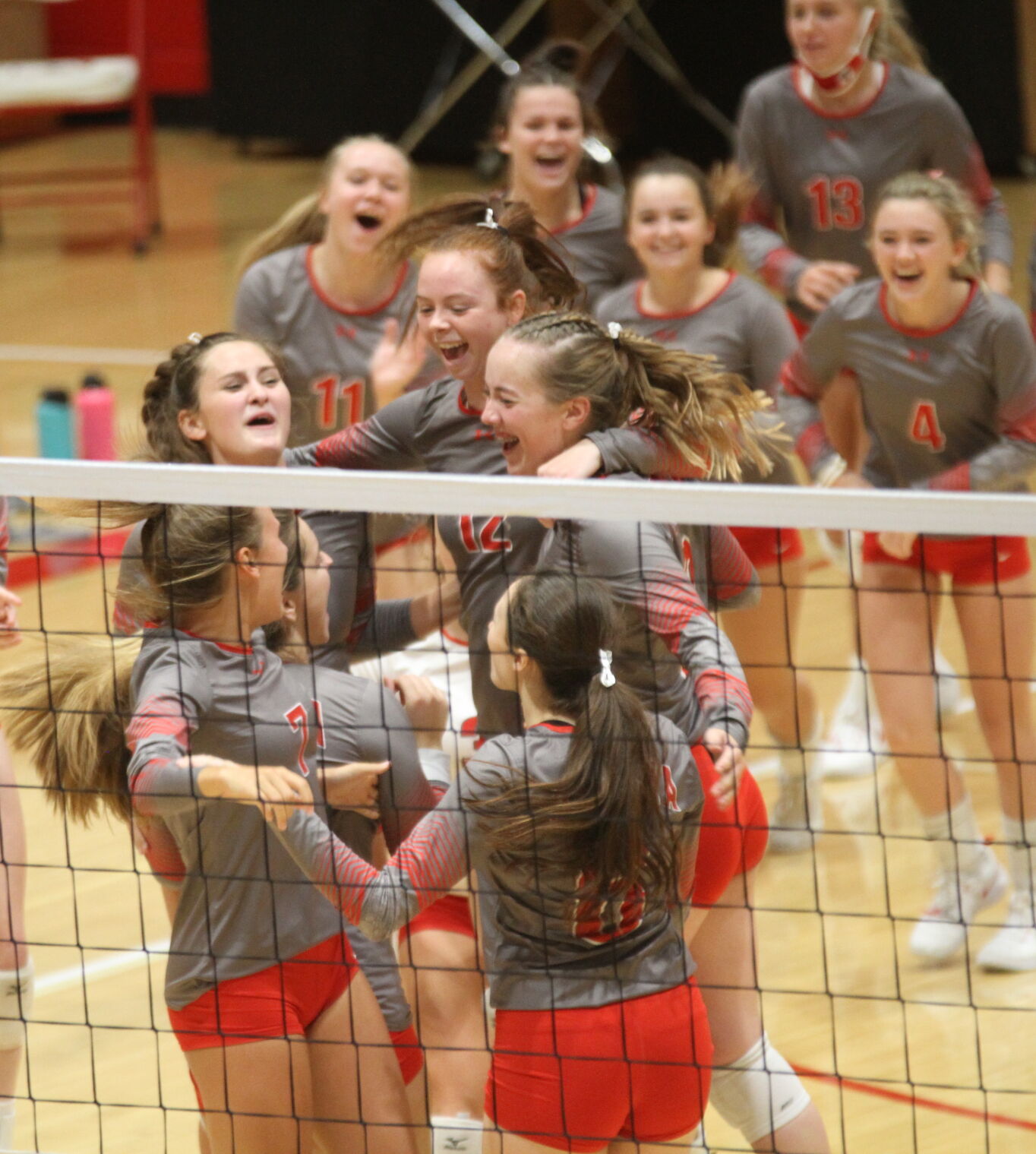 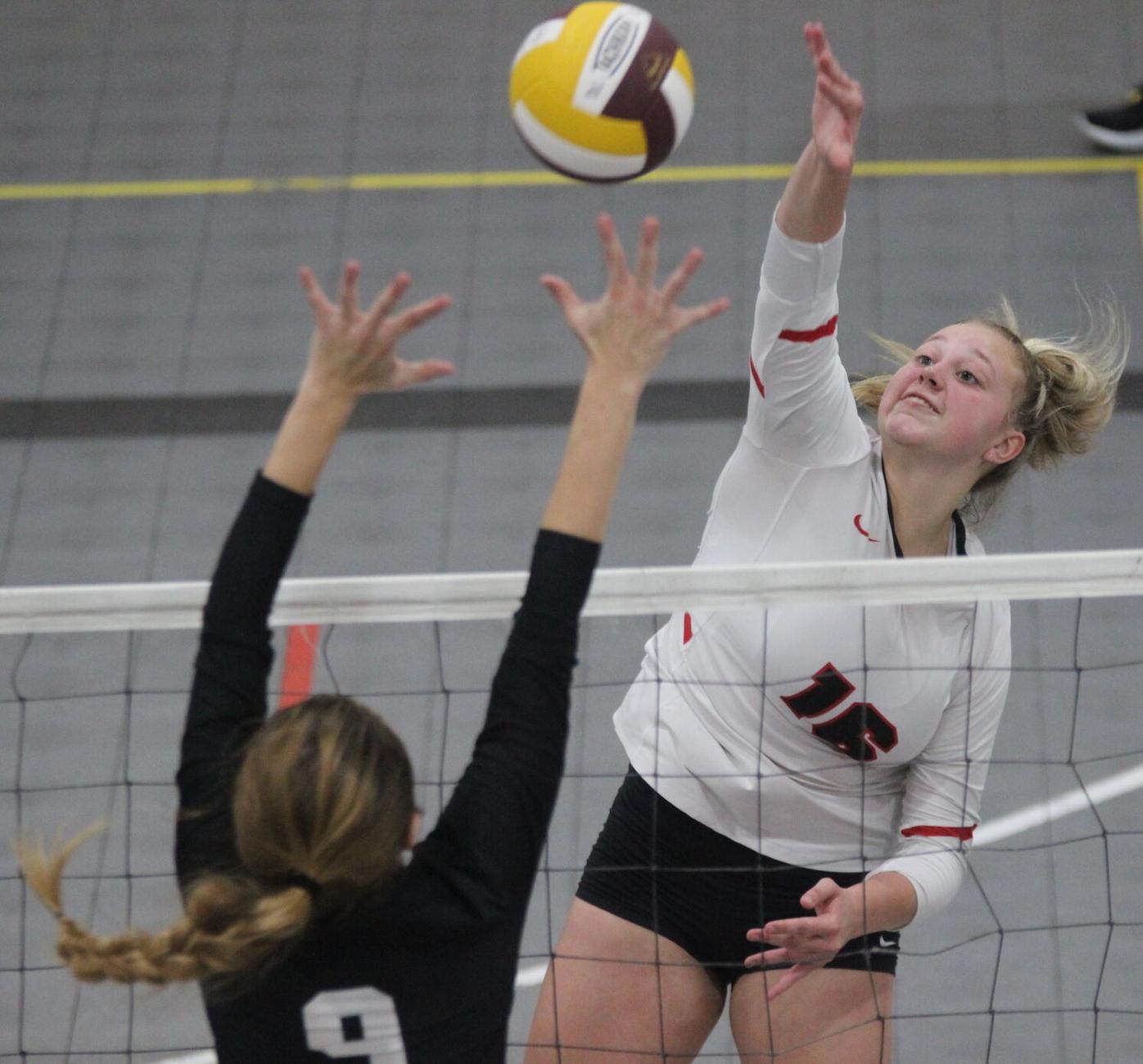 Centerville senior Kyla Moore hammers a kill over the net against New London earlier this season during the Davis County Invitational at the Mutchler Community Center in Bloomfield on Saturday, Oct. 10. 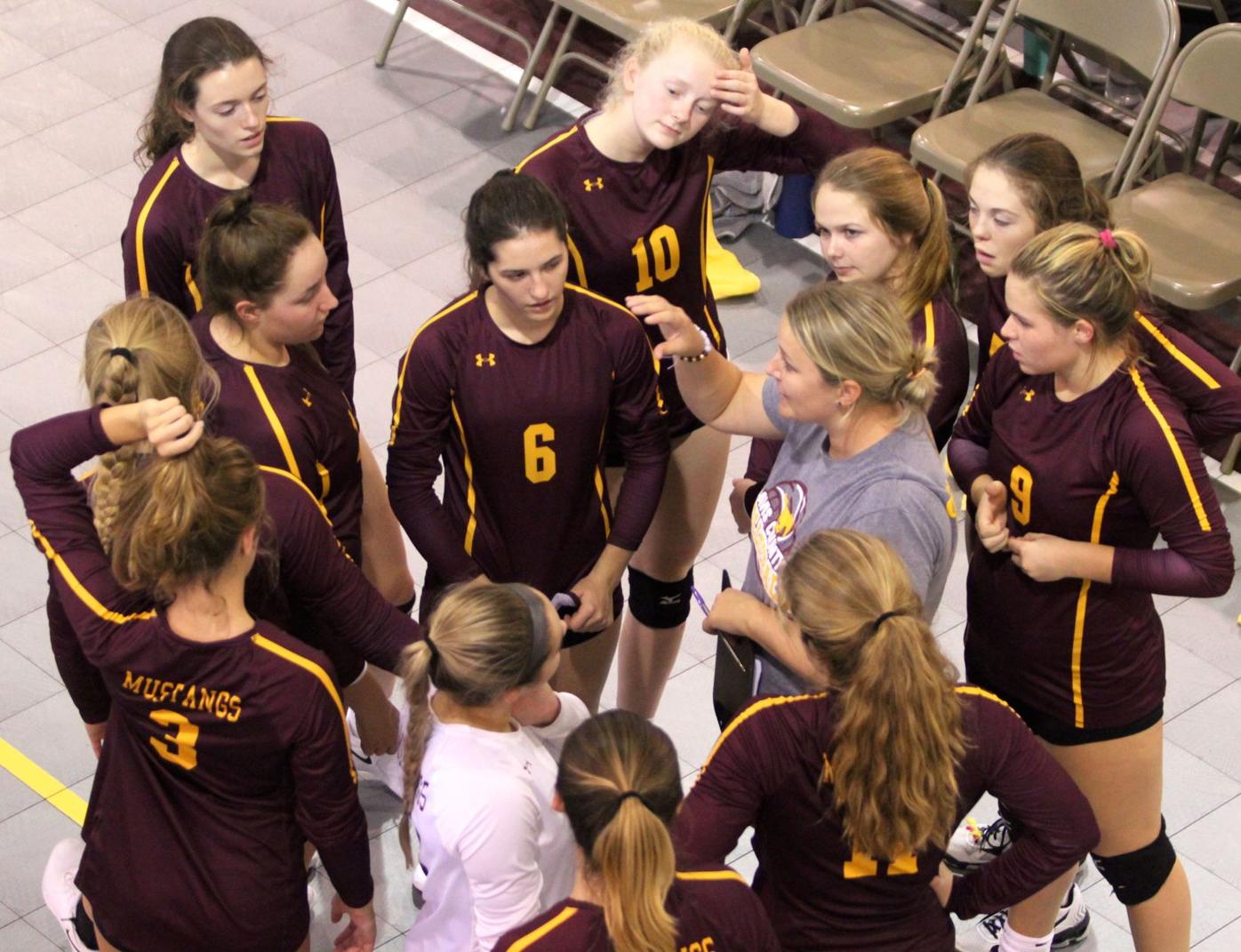 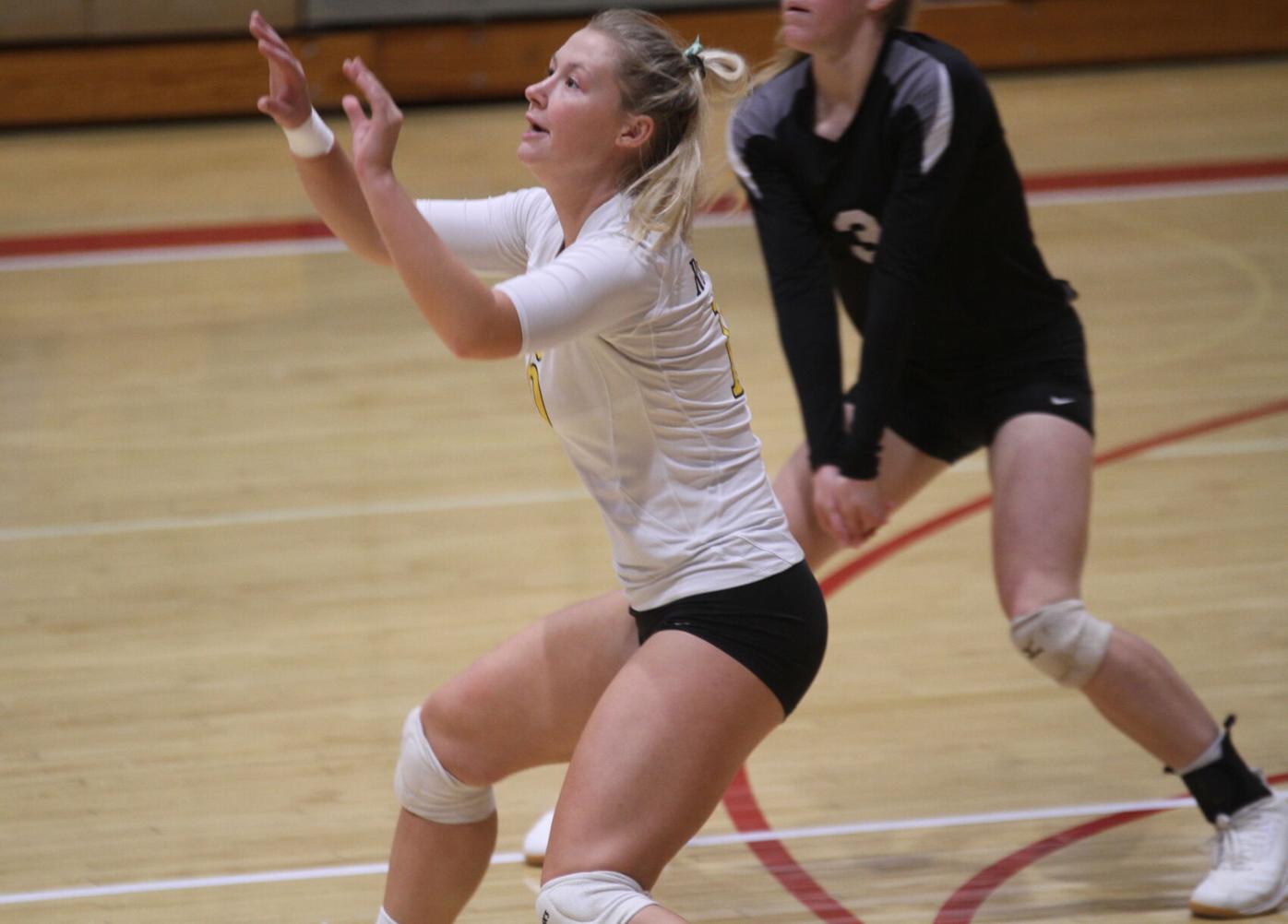 Eddyville-Blakesburg-Fremont senior Emalee Davis prepares to return a serve during action at the Ottumwa Invitational on Sept. 19 at Evans Middle School Gymnasium in Ottumwa. Davis returned to the All-Courier team after earning Class 3A all-southeast district honors. The senior libero led the Rockets with 282 digs and 30 ace serves 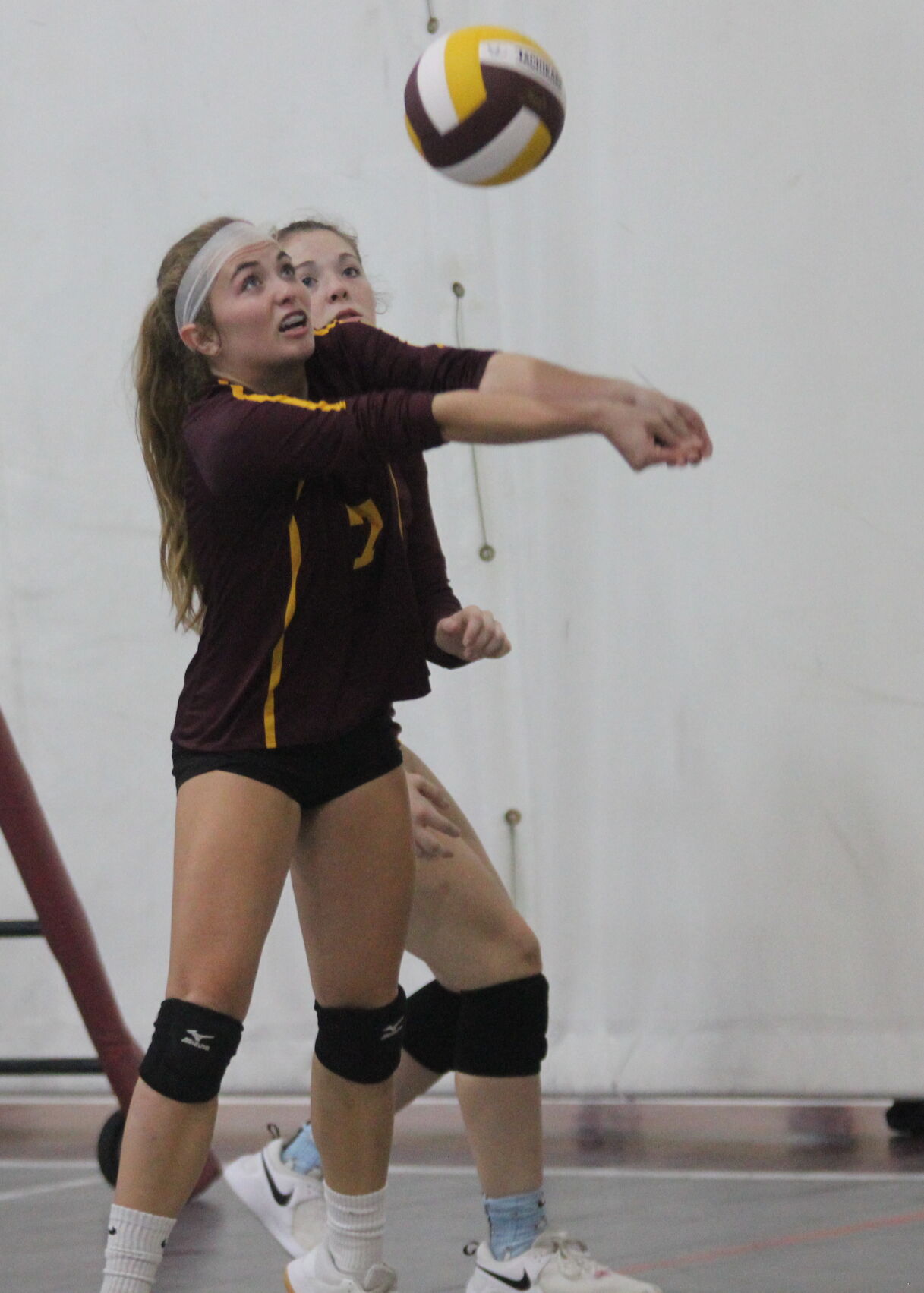 Davis County sophomore Chloe Fetcho sets up the Mustangs for one of her South Central Conference-best 723 assists this season during action on Oct. 10 at the Davis County Invitational inside the Mutchler Community Center in Bloomfield.

Centerville senior Kyla Moore hammers a kill over the net against New London earlier this season during the Davis County Invitational at the Mutchler Community Center in Bloomfield on Saturday, Oct. 10.

Eddyville-Blakesburg-Fremont senior Emalee Davis prepares to return a serve during action at the Ottumwa Invitational on Sept. 19 at Evans Middle School Gymnasium in Ottumwa. Davis returned to the All-Courier team after earning Class 3A all-southeast district honors. The senior libero led the Rockets with 282 digs and 30 ace serves

Davis County sophomore Chloe Fetcho sets up the Mustangs for one of her South Central Conference-best 723 assists this season during action on Oct. 10 at the Davis County Invitational inside the Mutchler Community Center in Bloomfield.

The 2020 area high school volleyball season was, if nothing else, unique.

Davis County, the last area team standing this season as the only area squad to qualify for the regional finals, set the tone for that unique nature even before the regular season began. Hosting their own preseason scrimmage, the Mustangs showed off a unique look on the bench wearing masks on the sideline while preparing for a season to be playing in the midst of the ongoing coronavirus pandemic.

"We just felt like, as a team, we should just go for it,” Davis County head volleyball coach Brooke Mason said. “I don’t think anyone loves wearing them, but I think it’s something easy that we can do that will hopefully slow the spread.

"I don’t think the girls mind it too much now. We don’t wear them during practice, but you’ll definitely see us wearing them during matches this season.”

As a result, Davis County didn't have to call off any matches, finishing just two matches shy of playing in 36 matches for the second straight year while ultimately producing a second straight winning season by going 18-16. That record was hard earned as the Mustangs had to overcome a slow start and midseason injuries to a pair of starting hitters.

After starting 2-5, the Mustangs found themselves competing for a regional championship against eventual Class 3A state champion Mount Vernon. Six players that appeared in at least 30 matches for Davis County will be back on the court next season, a sign of what could be a very special year next fall for the Mustangs.

Presently, the perseverance of the Davis County volleyball team led sophomore Sophia Young and Chloe Fetcho on to the All-Courier team. Mason, meanwhile, earned All-Courier coach of the year honors.

"I've never had a team with better teammates," Mason said. "We all really appreciate that and appreciate the opportunity to give those seniors one last season as part of this program."

Anne Guest was one of several Ottumwa senior volleyball players to make the most of a final season on the high school hardwood that was anything but assured. The Bulldogs not only started the year ranked in the top 15 of Class 5A for the second straight year, but moved up the rankings winning seven straight matches at one point including a signature four-set win over Southeast Polk on Senior Night and a third run to the Ottumwa Invitational title in the past four years that featured five consecutive sweeps.

Guest, who finished her four years as the top hitter for the Bulldog spikers with 754 kills in her career, earned All-Courier player of the year honors after leading OHS to a 14-win season. Beyond the record, Ottumwa faced a season of uncertainty week in and week out with all five Des Moines Public Schools unable to play, forcing OHS to find several replacement matches including a late-season trip to Waukee's tournament, impromptu matches with Marshalltown and Burlington as well as an intra-squad scrimmage in which players honored the history of the program and a 'Pink Out' scrimmage against Ottumwa coaches and former players.

“We worked so hard since the beginning of the season. We proved that, no matter what the name on the front of the jersey says, anyone can win,” Guest said. “We showed what Ottumwa can do.”

Guest finished a stellar four-year career for the Bulldog volleyball team by earning CIML all-conference honors, leading the Bulldogs with 178 kills and 54 blocks. Guest added 128 more digs and 22 more ace serves, finishing with an 89.5-percent (179-200) service efficincy mark to help Ottumwa secure a spot in the Class 5A regional semifinals and the program's first home postseason match in nine years.

Huff stepped up for the Warriors in something of a rebuilding season after the program's first run to a state tournament. Huff was fourth in the Southeast Iowa Superconference's south divsion with 724 kill attempts, leading the Warriors with 217 kills and was seventh in the conference with 3.3 kills per set.

The most proficient attacker in the South Central Conference this season wore a Redette uniform. Moore led the SCC with 333 total kills, averaging a conference-best four kills and 11 attempts per set while finishing second in the SCC with 42 ace serves.

Young helped lead a balanced Mustang attack, finishing third in the South Central Conference with 198 kills while helping Davis County overcome mid-season injuries to fellow hitters Kayla Joos and Morgan Petefish and five losses in the first six matches to post a winning 18-16 record while advancing all the way to the Class 3A regional finals. Young led Davis County in a three-set postseason win over SCC rival Eddyville-Blakesburg-Fremont, recording 11 kills against the Rockets in the regional semifinals.

Fetcho had a breakout season setting for the Mustangs, putting up 723 assists to lead all setters in the South Central Conference while finishing 13th overall in Class 3A. Fetcho added 10 kills, 13 blocks, 13 ace serves and was third for Davis County with 140 digs.

Manning earned all-district honors for the second straight year after bringing the most experience back to the court for the Warriors this season. That experienced required Manning to move to the roll of setter after shining as an all-state libero as a junior. Manning recorded a team-best 419 assists, 28 ace serves and 31 blocks while leading Van Buren County to a final 11-15 record after losing nine of the first 12 matches to open the year, advancing all the way to the Class 2A regional semifinals before taking a set off West Branch in the final match of the year.

Davis were named a Class 3A all-southeast district honoree as one of five players to start in all 28 EBF matches this season. The senior libero led the Rockets with 282 digs and 30 ace serves and joined senior teammate Brooke Shafer as one of three unianmous selections to the All-South Central Conference team.

While Guest was named Ottumwa's top offensive player this season, Heller earned the team's defensive leader award after collecting a team-best 268 digs and 36 ace serves as Ottumwa's starting libero. Like Guest, Heller's play for the 15-15 Bulldogs earned the junior a spot on the CIML All-Conference first team.

The Mustangs battled tough competition all year before finally getting healthy in the second half of the season, resulting in seven wins over the team's final 10 matches to clinch a winning record while advancing within one win of the program's first state tournament trip in 16 years. Even while dealing with injuries to middle hitters Kayla Joos and Morgan Petefish, Davis County managed to finish as the runner-up in the Ottumwa Invitational by winning three of four matches in the tournament before erasing a two-set deficit in a South Central Conference road win at Albia. The Mustangs also avenged earlier losses to WACO and Eddyville-Blakesburg-Fremont, beating the Warriors in a three-set match at the Davis County Invitational while handing EBF a pair of losses, including a three-set sweep in the 3A regional semifinals.