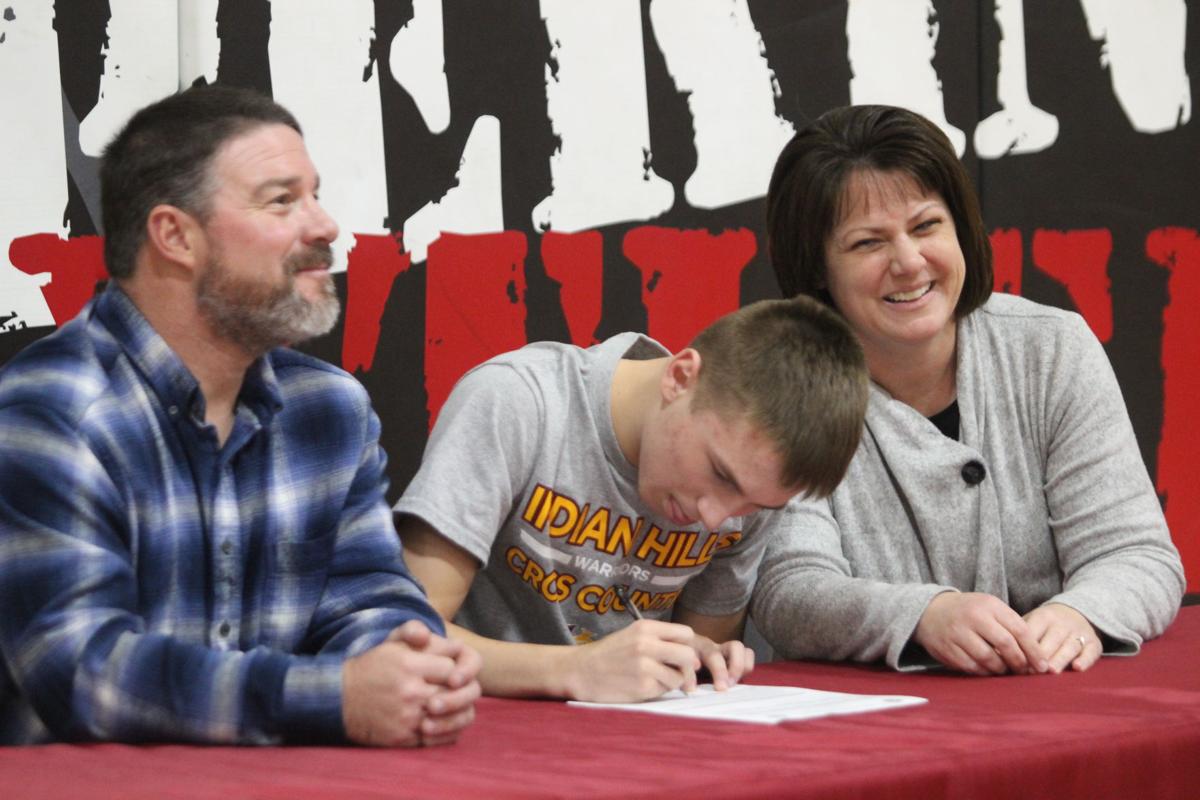 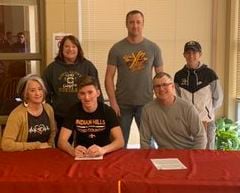 Joined by his family and coaches, Davis County senior Seth Emmons (seated, middle) signed his letter of intent on Wednesday in Bloomfield to run for Indian Hills Community College starting next season.

Joined by his family and coaches, Davis County senior Seth Emmons (seated, middle) signed his letter of intent on Wednesday in Bloomfield to run for Indian Hills Community College starting next season.

PEKIN – Derek Wilson knows what kind of athletic talent can be produced from smaller high schools.

“Being a Missouri Class 1 kid myself, I’m trying to pursue as many kids from those type of schools as I can,” Wilson said. “I know there’s a different kind of toughness and different kind of hunger that comes out of them.”

Wilson was on hand Wednesday to complete an active signing day for the running program at Indian Hills Community College. The current assistant coach and former runner for the Warriors was on hand at Pekin High School where all-state cross-country runner Colten Glosser signed his letter of intent to run for IHCC starting next year.

Glosser’s signing came just hours after Davis County senior Seth Emmons inked his NLI with the Warriors. Both runners were part of special seasons that resulted in top-10 finishes at the Iowa High School state cross-country meet, where Glosser secured a 13th-place finish and an all-state medal in his fourth Class 1A boys state run while Emmons capped his prep cross-country career finishing 71st in the 2A meet to help Davis County secure a fifth-place finish as a team with the foundation set for an even better finish next fall.

“Seth is the only runner we graduate,” Davis County head cross-country coach Josh Husted said. “This team will be much faster next season. This could have them working for a state trophy.”

Glosser and Brady Millikin helped the Pekin boys place 10th in the 1A team standings as both earned all-state honors. With four-year schools Loras and Simpson College also in the running, Glosser chose to stay closer to home and try his hand competing for the next two years at IHCC.

Wilson has been pursuing Glosser for several months, seeing the Pekin senior in one of the Panthers’ earliest meets this past season at Albia. Glosser secured his second straight win of the season in that race back on Sept. 3.

“As soon as I saw him running, I knew I had to get him to Indian Hills,” Wilson said. “He’s a kid I’m really excited about. I know I’m going to be able to continue developing his talents in the same way that he’s developed over the past four years here at Pekin.”

While Glosser was pushed by an all-state teammate in Millikin throughout the season, Emmons was part of a Davis County boys cross-country team that had to push through what proved to be a trying season at times. The Mustangs were able to remain a top-15 team in the Class 2A statewide rankings throughout the year despite battling sickness that lingered, particularly to No. 2 runner Carson Shively, who had mononucleosis for four weeks before returning late in the season.

The Mustangs eventually got healthy and started running to their potential, leading to a top-five finish as a team at the 2A state cross-country meet. It took balance from the rest of the team, guided by the senior leadership of Emmons, to keep the season from going off track.

“It’s cool to go back (to state) as a team. It really means a lot,” said Emmons. “I think we’re more prepared as a team this year. I also think seeing our girls do well and qualify just made me want to go there again with our team.”

Glosser and Emmons were both part of a special season of cross-country for area teams. Both Pekin and Davis County sent entire teams to compete in both boys and girls competition with all four placing in the top 10 while the Albia boys led all area squads placing fourth in the Class 2A meet.

“It’s definitely been a good year for cross-country in southeastern Iowa,” Wilson said. “It’s always good to grab a few of these kids coming out of these programs. We get to continue to develop them at Indian Hills and show everyone what this area has to offer on the cross-country side.”