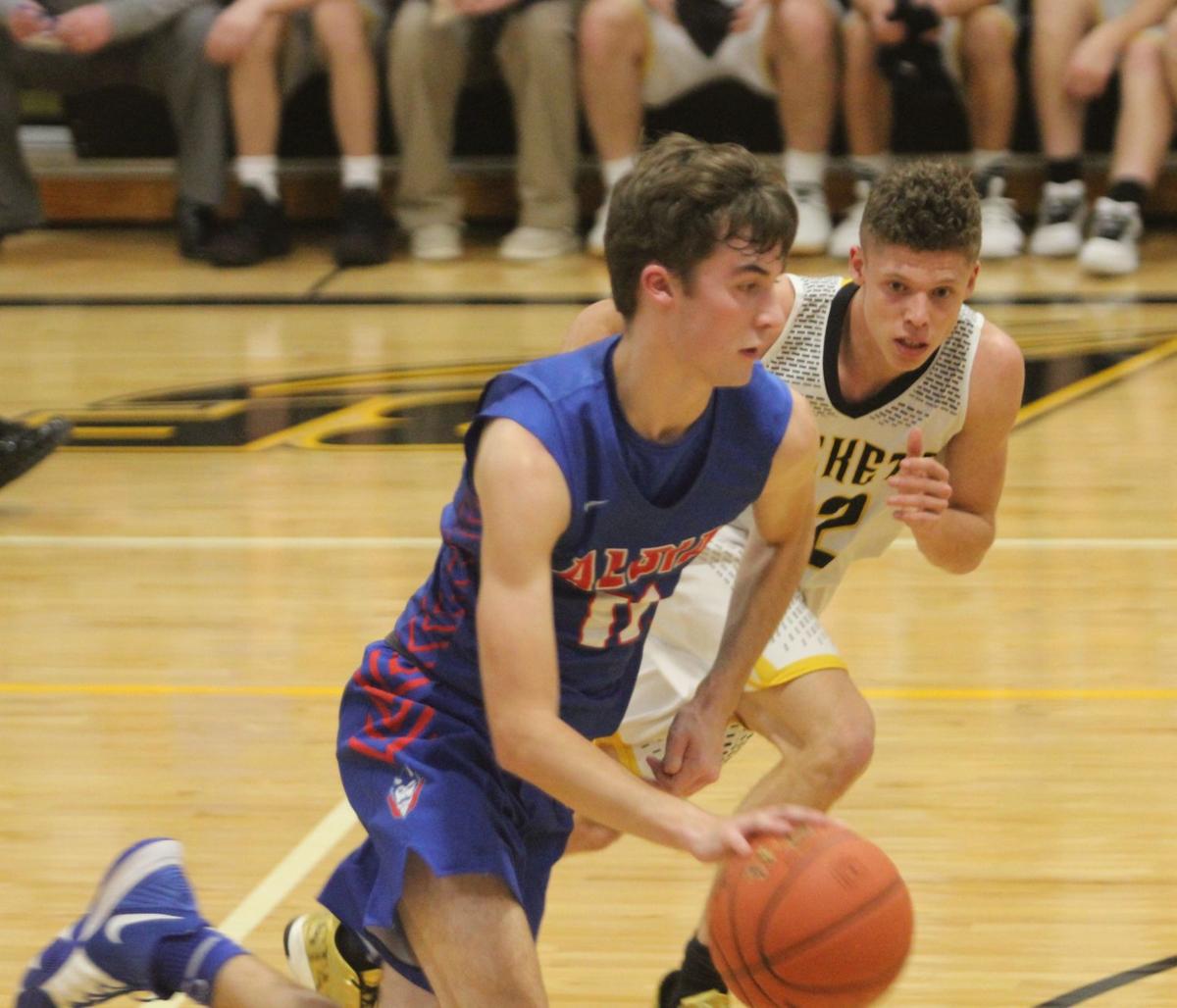 Blake Chance (11) brings the basketball up the court for the Albia boys basketball team against the defense of Eddyville-Blakesburg-Fremont senior Kalen Walker (12) on Tuesday night during a thrilling 53-51 South Central Conference road win for the Blue Demons at Eddyville. Chance led Albia with a game-high 20 points for the second straight night. Walker led EBF with 13 points. 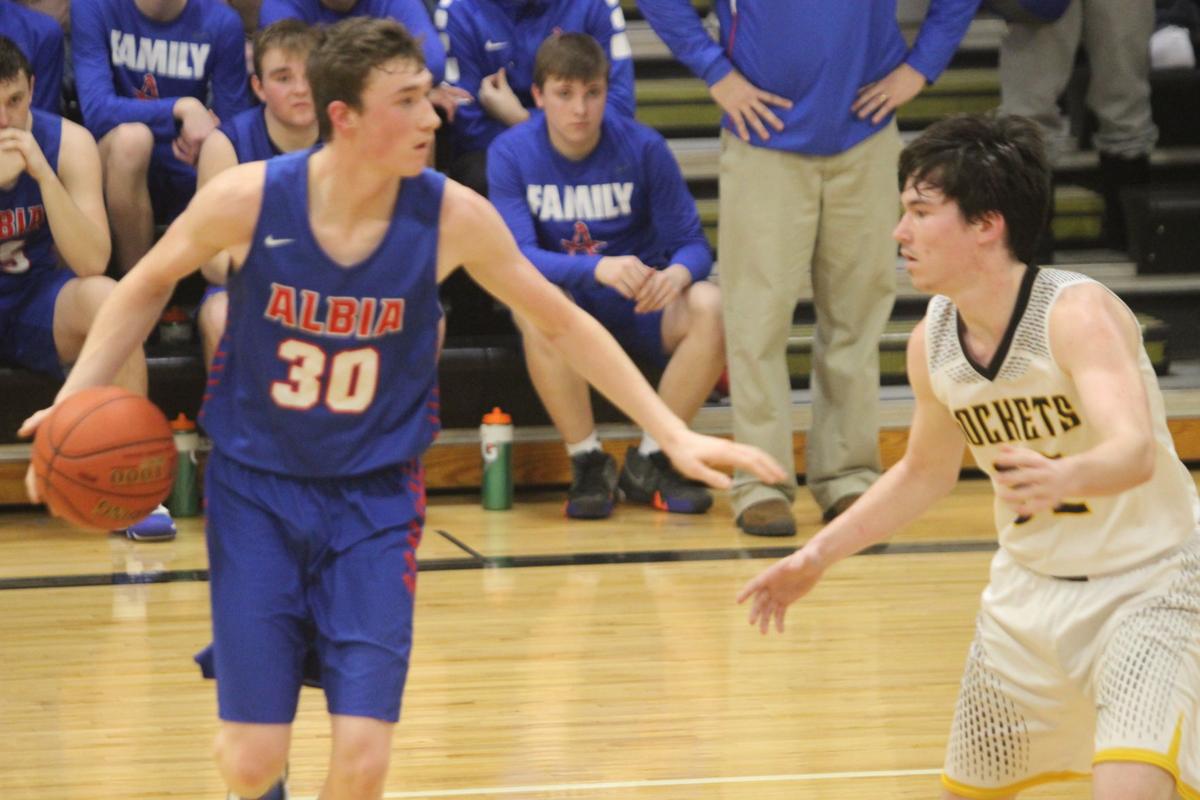 Blake Chance (11) brings the basketball up the court for the Albia boys basketball team against the defense of Eddyville-Blakesburg-Fremont senior Kalen Walker (12) on Tuesday night during a thrilling 53-51 South Central Conference road win for the Blue Demons at Eddyville. Chance led Albia with a game-high 20 points for the second straight night. Walker led EBF with 13 points.

The Albia boys basketball team has seen both sides of that coin over the past 48 hours. One night after a 3-pointer with two seconds left in overtime lifted the Blue Demons to a 58-55 upset at No. 1 (1A) Montezuma, Albia players held their breath as Eddyville-Blakesburg-Fremont senior Aidan Yates let his own game-winning 3-point try fly at the buzzer.

Unlike Blake Chance’s shot on Monday, Yates did not see his shot fall through the net. EBF’s bid to end Albia’s bid for a perfect run to a South Central Conference title fell just short as Jackson Pence’s two free throws with 7.4 seconds left proved to be the difference in a thrilling 53-51 Blue Demons win.

“Once again, it was a fun game to watch if you weren’t coaching in it,” Albia head boys basketball coach Kevin Archer said. “We had some guys step up and hit some shots, especially Jackson with those last two free throws.

“Once again, our guys really had to focus in during the fourth quarter.”

The loss was EBF’s fourth straight with the last three decided by three points or less. The Rockets (3-6, 2-4 SCC) showed incredible strides in their second meeting the Blue Demons, having opened the season with a 65-42 loss at Albia that began with EBF falling behind 18-1 after one quarter.

“We were never really in that first game after that first quarter. If you compare the two games, I think we’ve improved tremendously,” EBF head coach Travis Stout said. “With this group, it’s learn and get better. That’s the kind of the way we’ve approached this entire season.”

EBF scored 19 points in the first quarter of Tuesday’s rematch with Albia, finishing the opening period on a 16-2 run to take a 19-10 lead. Kalen Walker sparked the run with a pair of 3-pointers and three steals.

The Rockets had to withstand another Albia first-half run, however, as Blake Chance matched Walker by starting a 17-1 rally for the Blue Demons with a 3-pointer, a steal and an assist on a 3-pointer by Joe Teno. Chance finished with eight points in the second quarter, including a pair of free throws in the final second, giving Albia a 27-22 halftime lead.

“We knew how well Albia is playing right now. They’re tough to match up against,” Stout said. “Blake Chance is just a tremendous high school basketball player. I thought our guys played well. That second quarter was just a bad quarter for us, but I challenged our guys to keep attacking in the second half.”

Attack the Rockets did. Back-to-back layups by Logan McCrea got EBF right back in the game. Isaiah Smith tied the score inside with 5:26 left in the third quarter and put the Rockets ahead with a corner 3-pointer, creating the first of six lead changes in the second half.

Teno matched Smith with a pair of 3-pointers late in the third quarter, allowing Albia to take a 42-39 lead into the fourth. Walker and Chance, the leading scorers for each team, both drilled go-ahead 3-pointers in the final six minutes with Chance tying the score with under four minutes left after a second go-ahead 3-pointer by Smith in the half.

Smith put EBF (3-6, 2-4 SCC) back on top 51-49 from the foul line with 2:10 left. Blake Stewart tied the score again with a layup in the final two minutes. The Rockets could not hold on to the basketball on the following possession as Albia pressure created EBF’s 25th turnover of the game.

“That turnover just killed us,” Stout said. “Turnovers were definitely the difference in the game. When the score is that tight, you have to have quality offensive possessions.”

Albia (9-1, 5-0 SCC) held the ball for the final shot of regulation, a situation the Blue Demons found themselves in one night earlier at Montezuma. With just four fouls committed in the second half, EBF had chances to disrupt the Blue Demons in the final seconds without sending Albia to the line.

Instead, Trey Griffin found Pence under the basket with under 10 seconds left. Yates could not give up the foul for EBF before Pence got a shot off, leading to the decisive free throws.

“We told the guys in the last timeout before that possession we wanted to foul with 10 seconds left and set up our denial defense,” Stout said. “We were just a split-second late. Pence was able to draw the foul on the shot instead of on the floor. It’s just that close sometimes. It was sure magnified tonight.

“Jackson had a couple of big free throws late on Monday night (at Montezuma),” Archer added. “He’s come up big for us in big moments. That’s pretty cool to see as a head coach.”

Chance led all scorers with 20 points. Walker finished with 13 points to lead EBF.

Both teams will be watching the weather report to see if either can play SCC home games on Friday. Albia is scheduled to host Chariton while EBF will be looking to snap their four-game losing streak at home on Pink Out night against Davis County.