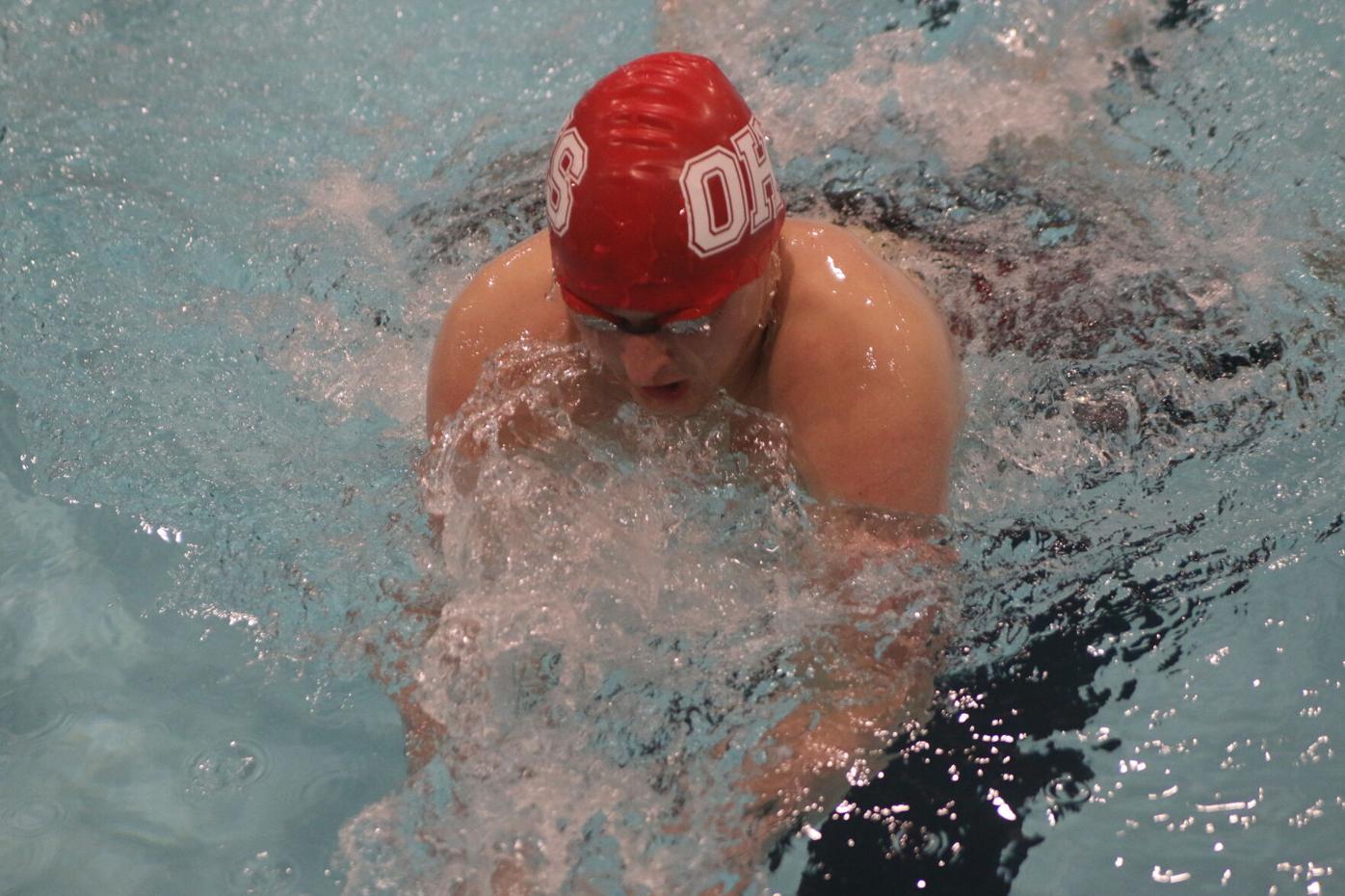 Ottumwa senior Rece Budde heads down the pool during the 100-yard breaststroke on Thursday for the Bulldogs during a CIML Metro conference boys swimming dual against Des Moines North/Hoover at Mike McWilliams Pool in Ottumwa.

Ottumwa senior Rece Budde heads down the pool during the 100-yard breaststroke on Thursday for the Bulldogs during a CIML Metro conference boys swimming dual against Des Moines North/Hoover at Mike McWilliams Pool in Ottumwa.

OTTUMWA — Luis Garcia was a part of three wins on Thursday night at Mike McWilliams Pool, including a first-place swim in the 100-yard backstroke.

Still, the highlight of the night for the Ottumwa senior was the one race he didn't win. Garcia and Bulldog teammate Ashton Gevock battled it out in the 200-yard individual medley with Gevock rallying in the backstroke and the breastroke after falling over two seconds behind in the opening butterfly lap, winning the race by just 0.05 seconds in the most thrilling race of the night of Ottumwa's CIML Metro conference dual win over Des Moines North/Hoover.

"I just slowly started catching up to him. At the end, we were just neck-and-neck," Gevock said. "I was challenging myself. Luis is a great swimmer. I just kept telling myself that I wanted to beat him. That's what helped me catch back up.

"That was the highlight of the night," Garcia said of the 200-yard individual medley. "It was such a close race. We were both so fast. I'm happy he's the one that beat me. We're always close in practice."

For the most part, Ottumwa swimmers were left to push each other on Thursday in the first competition out of the holiday break. Jared Oosterhuis was able to secure a pair of wins for Hoover/North, taking the 50-yard freestyle in 24.39 seconds and the 100-yard breaststroke in 1:15.46 each time edging a Bulldog swimmer by less than a second.

Overall, Ottumwa's depth led to a comfortable 122-26 dual win keeping the Bulldogs perfect conference record in tact. That depth helped create some fun challenges among teammates including Carson Shively being pushed to lower his time in both the 100-yard and 200-yard freestyles with Cason Palm pushing Shively to a 53.07-second swim in the 100 while Palm broke a minute in the race for the first time.

"I was mainly focusing on Cason because he was the person that would be the closest to producing the same time in that race as me," Shively said. "That really did push me to cut a lot more time this season. We like to compete with each other.

"It's nice that we have people that are up there in times with us seniors. There comes a point in the season where you need someone to push you. When you have those teammates during practice and during meets that compete with you, it makes things so much easier."

Shively matched Gevock with four wins in four races taking part in a winning 200-yard free relay joining Palm, Garcia and Cameron Manary in posting a time of 1:38.7. Shively, Manary, Palm and Gevock finished the night by winning the 400-yard free relay in 3:45.57 in a race that featured 12 different OHS swimmers making up four different teams.

"We've been working so hard of the holiday break. We knew after competing at Iowa City (on Dec. 18) that we'd have this chunk of time to power up and really get some solid work in," Ottumwa head boys swimming coach Cherie Langland said. "We've been working super hard over the break, putting in a lot of work with a lot of yards and a lot of intensity. I think the guys kind of felt that in this meet.

"I just reminded the guys that we have specific goals in mind for the season and we're going to continue to work hard at achieving those goals."

One of those big goals comes next week at Des Moines when the Bulldogs (5-1, 2-0 CIML Metro) swim at Roosevelt. Should Ottumwa knock off the Roughriders next Thursday night, it would clinch the first CIML Metro conference championship in program history.

"We are really going to work hard between now and next week to throw our best at Roosevelt and see what we can do," Langland said. "We believe we can beat Roosevelt for the first time ever. If we can come at them swinging and give it our best shot, it will give us the confidence to truly understand that we can become conference champions. The depth of this team gives us a chance to achieve some real milestones."