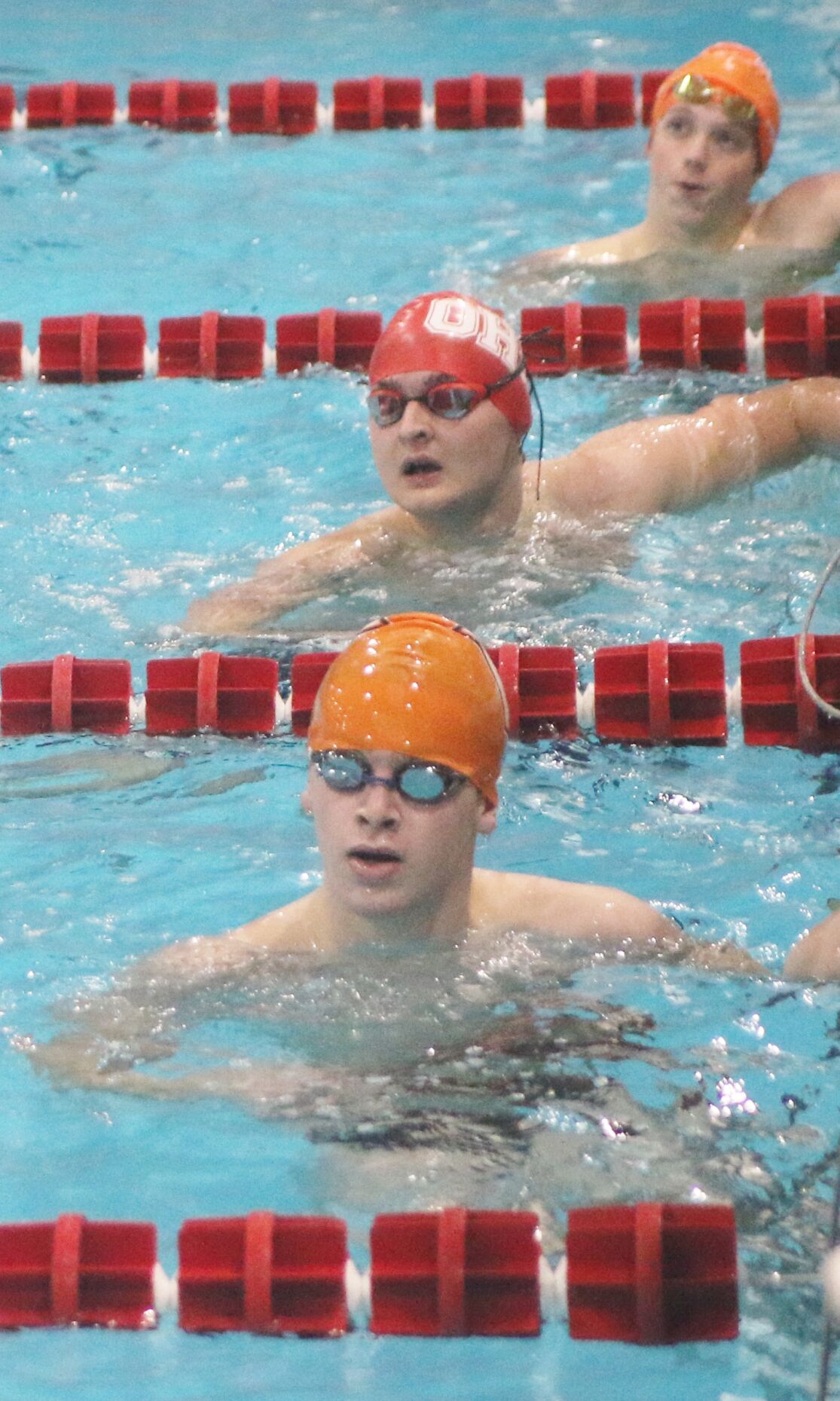 Ottumwa senior Rece Budde (middle) looks up at the board at Mike McWilliams Pool in Ottumwa as do West Des Moines Valley teammates Charlie Bishop (top) and Carter Ballard (bottom) at the conclusion of the 100-yard freestyle during boys a CIML high school swimming dual on Thursday. 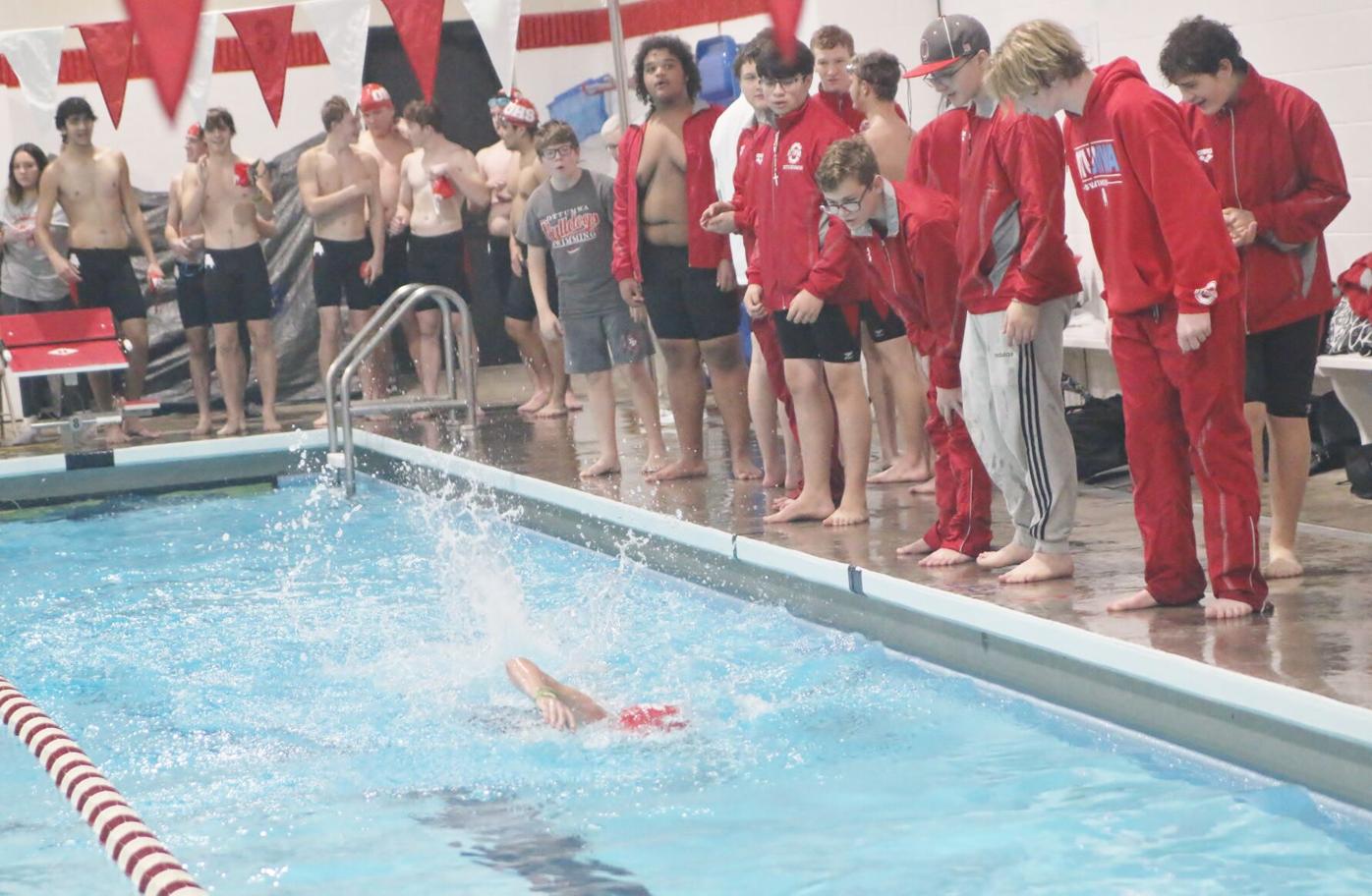 Ottumwa senior Rece Budde (middle) looks up at the board at Mike McWilliams Pool in Ottumwa as do West Des Moines Valley teammates Charlie Bishop (top) and Carter Ballard (bottom) at the conclusion of the 100-yard freestyle during boys a CIML high school swimming dual on Thursday.

OTTUMWA — Kevin Kretz hoped seeing his name on the record board at Mike McWilliams Pool would inspire future Ottumwa swimmers.

The 50 freestyle record holder even admitted back in August that it might inspire someone to take his name off that board.

"Every single one of these guys to get their name up on that record board, maybe even that 50 free record," Kretz said four months ago. "It'd be awesome to see that."

Cameron Manary and Cason Palm may very push each other to beat the record marks set by Kretz before it's all said and done. Thursday's season-opening dual with fourth-ranked West Des Moines Valley saw the current Ottumwa teammates battle it out to the end for what proved to be the only 1-2 finish for the Bulldogs with Manary edging Palm by 0.12 seconds, posting a season-opening time of 23.77 that is already less than two seconds shy of Kretz's 21.89-second pool record set in the CIML Metro conference meet last January and the 21.64-second school record time swam by Kretz in last February's Iowa High School boys state swimming meet.

Suddenly, a record that Rod Starkweather once held for almost 40 years may be broken for the third time by a second different Ottumwa swimmer before this season is over. Considering neither swimmer are seniors this year, Manary and Palm may battle it out several times over the next two years to see who can post the fastest 50 in program history.

"Cam did a phenomenal job in that race. He's going to continue to get better, so I've got to take an extra step and work harder," Palm said. "It's going to push both of us to keep lowering that time. I really didn't expect to swim a 23-second 50 freestyle in the very first race of the season. I'm feeling really confident for the meets to come, especially the ones at the end of the year."

Ottumwa head coach Cherie Langland sensed early on that Manary and Palm were capable of something pretty special after the first varsity race of the season. Palm anchored Ottumwa's top 200 medley relay team to a third-place finish with a 23.77-second swim while Manary swam 25.21 seconds in the third leg of a fifth-place finish for the second Bulldog relay foursome.

"We've had relay teams qualify for state with 23-second legs. Seeing Cason do that in the medley was the first indicator that the open 50 was going to be pretty exciting," Langland said. "For Cameron and Cason to both open the season swimming 23-second 50 frees gives us such hope for the potential of what those times can become as the season unfolds, especially with the taper at the end of a season of hard work.

"There were already rumblings that Kevin's record might already be in danger. I definitely think it's in danger now. What I love about the first couple of swim meets is seeing a highlight of what we have to work on practice. This first meet gives us a lot of inspiration. We've gained a lot of motivation to achieve some lofty goals that can be accomplished if we just continue to put in the hard work."

Valley would ultimately win up winning the season-opening dual, 88-70, in a battle of two teams that finished in the top 20 of last year's state swimming meet. Dylan Nelson, the winner later in the night of the 500 freestyle in 5:03.08, got to share in some individual success with Tiger teammate Carson Copple early in the meet as both Valley swimmers finished the 200-yard freestyle with identical times of 1:53.18, sharing first place honors edging out Ottumwa freshman Ashton Gevock by 1.32 seconds.

Manary, however, was able to bring home Ottumwa's first win of the season edging out a talented field that included Valley relay winners Carter Ballard and John LaMasters. The 50-yard swims in both the 200 medley and 50 freestyle showcased improved times from the last time Manary swam competitively.

"I took a break for the last two years to play basketball. Two years ago, my best time in the 50 was 28 seconds," Manary said. "I was really happy, and pretty shocked, to see 23.77 up there on the board. It's been difficult to get back into this sport with the conditioning and getting back into swimming shape, but it's all been worth it."

Ottumwa (0-1) would also come out with wins in the final three varsity races as Valley (5-1) swimmers were disqualified in each of those events. Tyler Lowenberg won the 100-yard backstroke in 1:43.64, Nathan Calhoun won the 100-yard breaststroke in 1:06.38, Quentin Mitchell, Zane Kirubakaran, Dallen Rippey and Carter Thompson won the 400 free relay for the Bulldogs in 4:20.55.