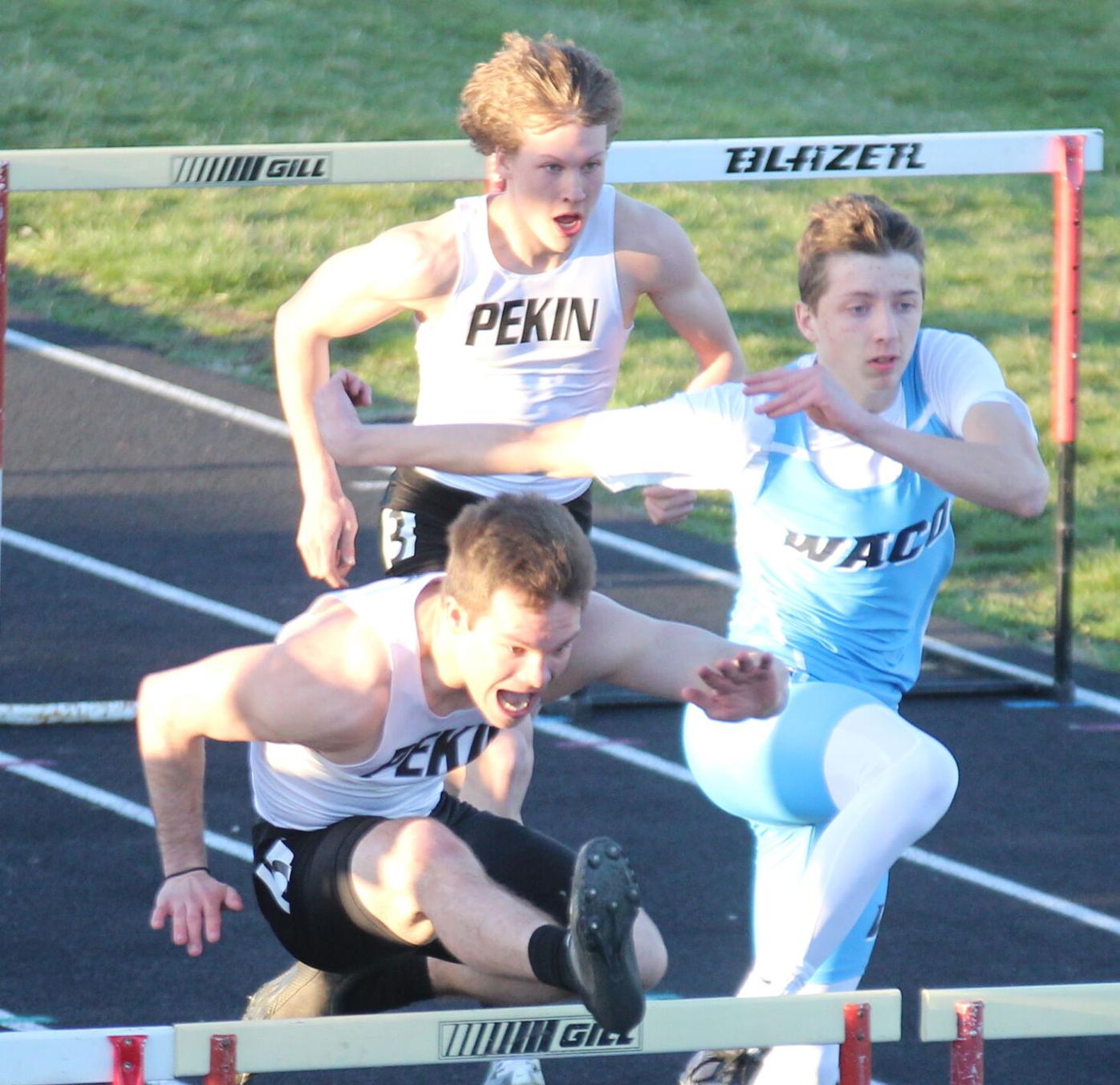 Pekin senior Michael Jones clears a hurdle in front of runners from WACO and Pekin during the shuttle hurdle relay on Monday night at the 2021 Ruritan Relays at Davis Eidahl Track at Pekin High School. 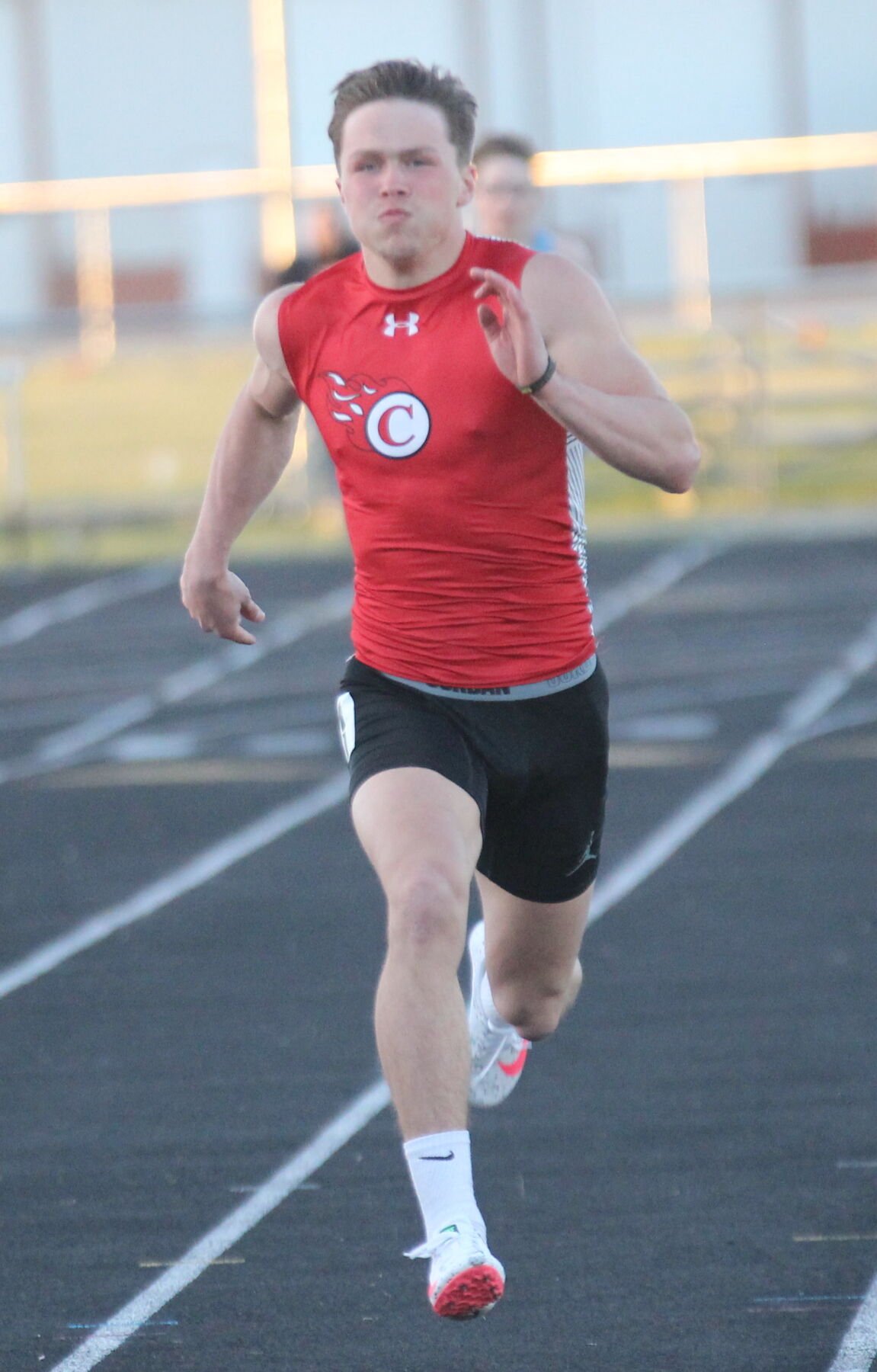 Cardinal junior Griffin Greiner heads down the track at Davis Eidahl Track on Monday on the way to winning his fourth event, the 200-meter dash, at the 2021 Ruritan Relays. 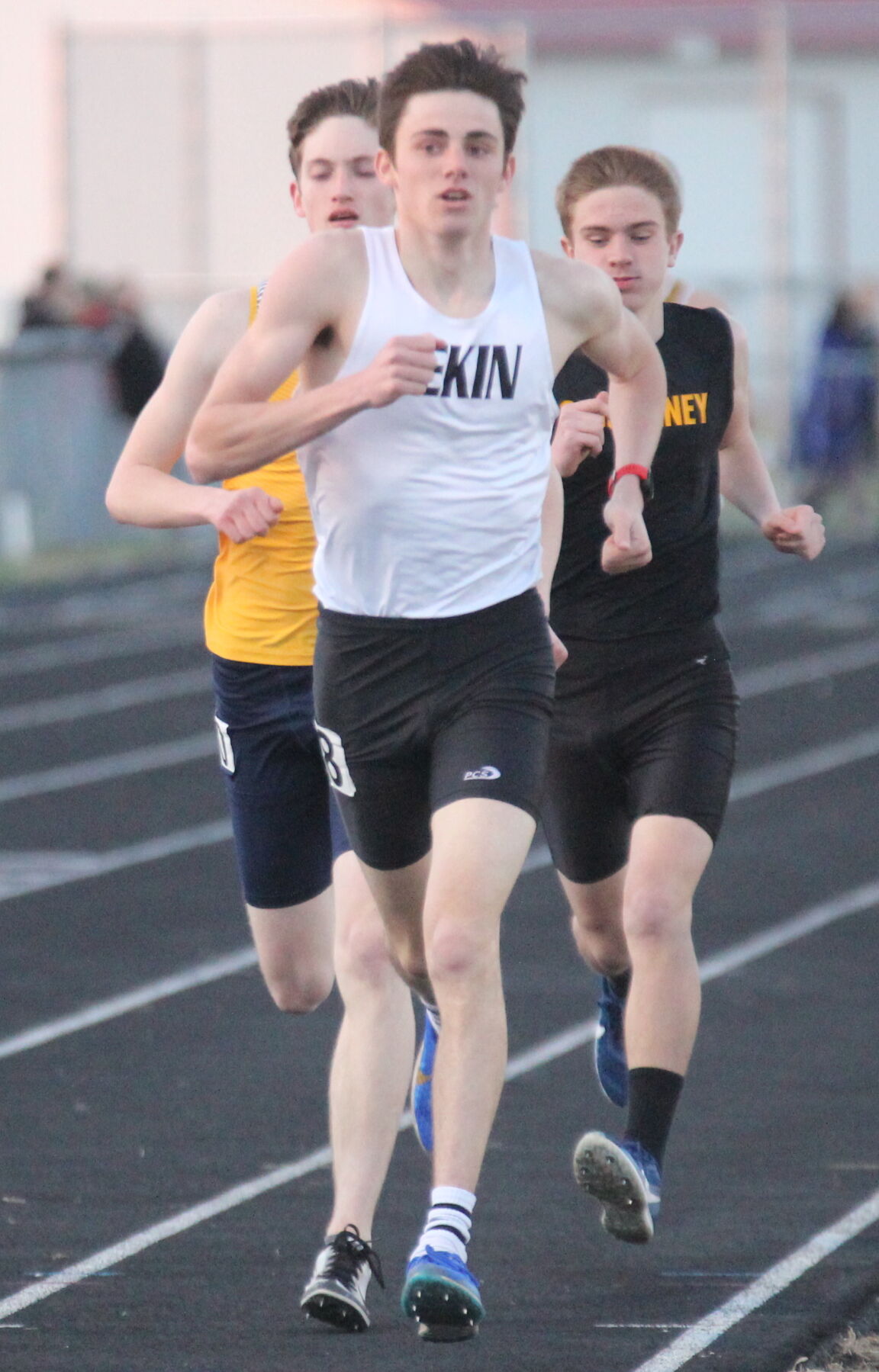 Pekin senior Michael Jones clears a hurdle in front of runners from WACO and Pekin during the shuttle hurdle relay on Monday night at the 2021 Ruritan Relays at Davis Eidahl Track at Pekin High School.

Cardinal junior Griffin Greiner heads down the track at Davis Eidahl Track on Monday on the way to winning his fourth event, the 200-meter dash, at the 2021 Ruritan Relays.

Athletes spent a good portion of the night at the 2021 Ruritan Relays running against the wind, a very prevalent wind, during the first home track and field meet for the Panthers in two years. Brady Millikin helped led the Panthers to home win on Monday, earning a pair of individual wins while anchoring the distance medley relay to victory in 4:07.83.

All told, the Pekin senior ran nearly four miles in four races, winning the 3,200 and 1,600 meter runs while helping pick up 30 of the 124 points that lifted the Panthers past Cardinal. Griffin Greiner scored 40 points with four wins in four events for the Comets, who placed second with 71 points at Davis Eidahl Track.

For Millikin, however, the 6,000 meters ran over four races may have felt even longer considering the stiff winds that runners heading to the finish line literally ran head-first into throughout the meet.

"I feel okay right now. Tomorrow might be a different story," Millikin joked. "I'm guessing I'm going to be a little bit sore.

"As a team, you almost have to view this as a workout. The times aren't going to be that impressive. If you look at each individual, they all have three or four events they're competing in. At this point of the season, we're just looking to get into shape so we can begin hitting our stride later on during the season."

Greiner showed his versatility for the Comets, picking up a high jump victory as the only athlete to eclipse six feet, crossing the bar at 6-2. On the track, Greiner won the 100-meter dash in 12.43 seconds and the 400 meters in 52.73 before polishing off his perfect night edging North Mahaska senior Dylan Klinker by 0.11 seconds in the 200-meter dash, crossing the finish line in 25.5 seconds.

"When I ran inside at the Dickinson Relays a couple weeks ago, I felt pretty good. I came out here for the first outdoor meet of the season and got greeted by the how windy it was," Greiner said. "I just tried to give it my all. It wasn't easy with the conditions. It was pretty difficult to deal with. In the open 400, I knew I had to go all out when I hit the backstretch. I just put my head down and ran as fast as I could."

Besides Millikin, Michael Jones was part of a winning effort in the shuttle hurdle relay (1:18.38) before finishing first in the 100 meter high hurdles in 19.09 seconds. It was just the second meet of the season for Jones running the high hurdles.

"I just kind of got thrown in there on Friday (at Albia). I would rather compete in the high hurdles than the low hurdles," Jones said. "It's taken some getting used to, but it's working out well so far."

Mason Juhl brought home a win in the field for Pekin, taking the shot put title with a throw of 40 feet and eight inches. Zack Wise scored a win on the track for the Panthers, finishing first in the 800 meters in 2:16.24.

"These kids work hard. That's been the best thing that's stood out over these first two meets of the season," said Eidahl, entering his 57th season as head coach of the Panthers. "We're getting better. The effort is there. For how young we are, the kids have come out in tremendous shape this season. We've got some great leaders in Brady and Brayden (Sobaski) that are great examples for our younger athletes. I think everyone was eager to compete.

"At least it wasn't rainy or cold or sleeting."

Sigourney opened the track and field season finishing fifth at the Ruritan Relay with 57 points. The Savages scored a pair of relay wins, running the 4x100 in 48.65 seconds after taking the 4x200 relay in 1:43.3.

Moravia also found relay success on the way to a seventh-place finish as a team with 52 points. The Mohawks opened the night winning the sprint medley relay in 1:47.17 before closing the meet with a win in the 4x400 in 3:49, two seconds ahead of North Mahaska.

Van Buren County scored 38 points in the outdoor debut for the Warriors with Wyatt Mertens winning the long jump coming up a quarter-inch shy of reaching 19 feet. After competing at Pekin, Van Buren County will host their own invitational on Thursday in Keosauqua.