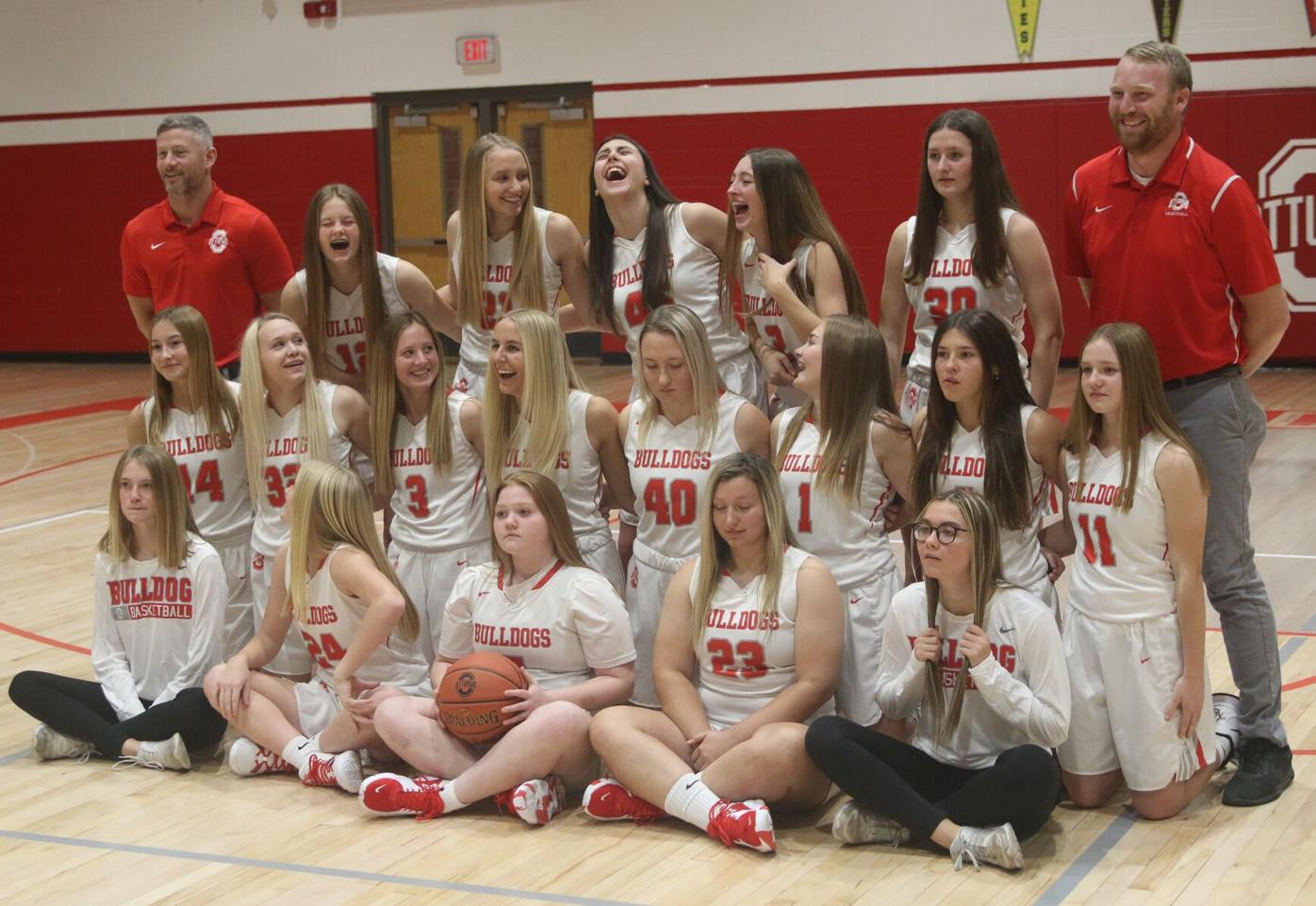 Members of the Ottumwa girls basketball team share some laughs before taking their team photo for the 2021-22 season on Thursday night at Evans Middle School Gymnasium. 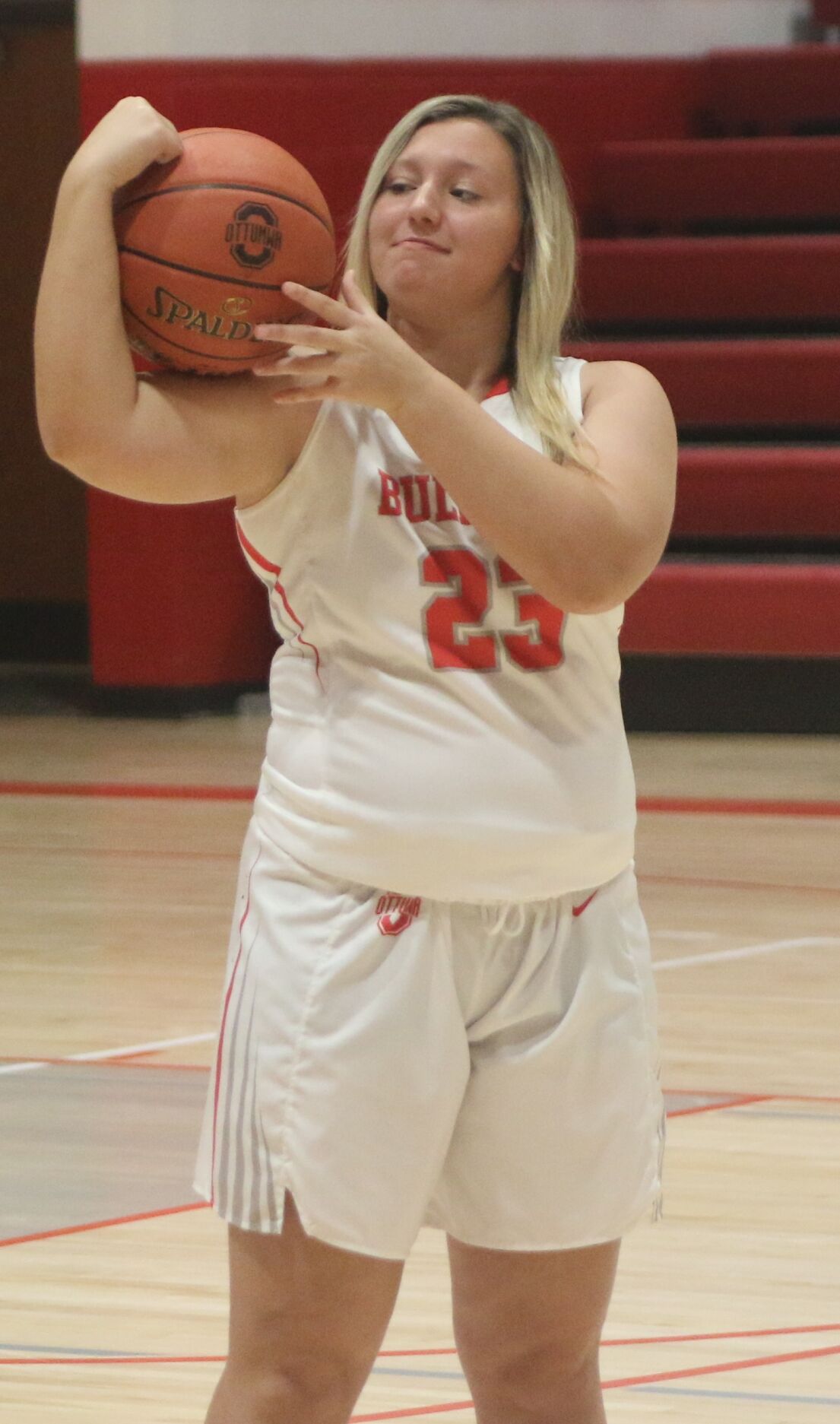 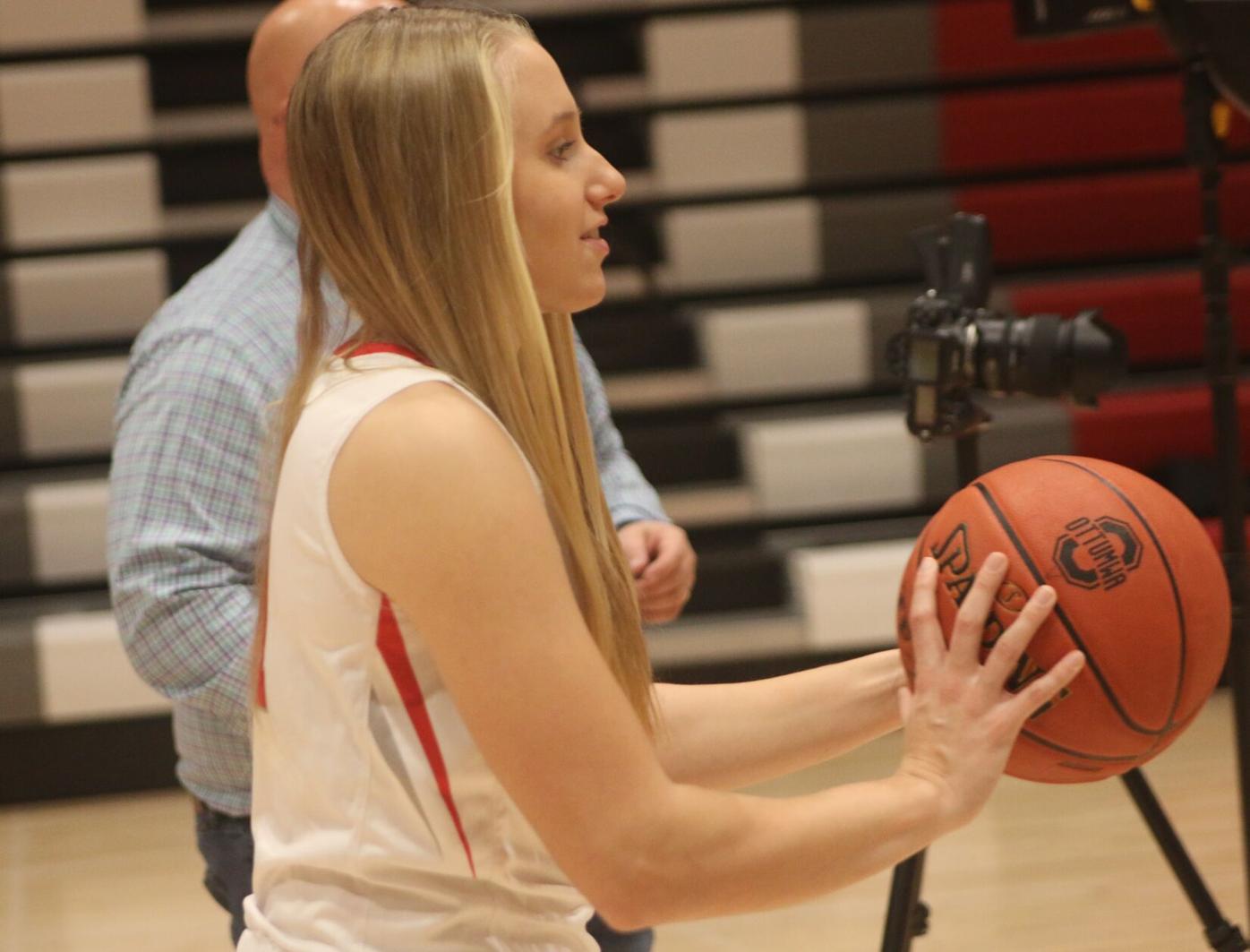 Ottumwa senior Addison Coram passes the basketball to her teammates during Media Day for the upcoming Bulldog girls basketball season on Thursday night at Evans Middle School Gymnasium in Ottumwa.

Members of the Ottumwa girls basketball team share some laughs before taking their team photo for the 2021-22 season on Thursday night at Evans Middle School Gymnasium.

Ottumwa senior Addison Coram passes the basketball to her teammates during Media Day for the upcoming Bulldog girls basketball season on Thursday night at Evans Middle School Gymnasium in Ottumwa.

OTTUMWA — Each class lined up Thursday night to take photos with head coach Joe VandenBerg at the end of Media Day for the upcoming Ottumwa High School girls basketball season.

Then came the freshman class, which brought in more than twice as many players as any of the first three classes. Seven high school rookies figures to give VandenBerg what he is calling a 'foundational' season which tips off at Fort Madison on Monday, Nov. 22.

"We've got some experience that is back and they're going to guide a young group," VandenBerg said. "As they guide them, we're going to start and continue to build a foundation of success. That starts with finding out how comfortable these girls are and how soon are they comfortable. The more we play and the longer we play, the more improvement there will be."

It certainly wasn't a nervous environment during Thursday's Media Day. In fact, the younger Ottumwa basketball players kept it very light with jokes and impressions of the coaches causing several outbursts of laughter.

Addison Ransom, the most experienced Ottumwa basketball player entering her senior season having played in 33 games over her first three seasons, has enjoyed the spirit the newest members of the Bulldog varsity squad have brought to the team during the first week of practice.

"It's been a really fun start to the season. I like all these youngins. They're fun in practice and they take it really seriously," Ransom said. "They show up every day and they're excited to be there. They're excited to get to work and get better."

Ransom is Ottumwa's top returning scorer having averaged 8.7 points a game last season, second only to the 9.9-per-game average of senior Anne Guest during a 6-9 season for the Bulldogs. Having more freshmen on the varsity team than upperclassmen this year did give Ransom some concern about how successful her senior season of high school basketball would be.

"I was a little worried about this season. It's basically like having a brand-new team," Ransom said. "It's been great so far. We've been working well together. It's really exciting for me, but it's really only the beginning for a lot of the girls on the team. I've already been thinking about coming back after this season to watch these girls. It's such a fun group."

Ransom is one of two returning starters from last season. Olivia Coram, who like Ransom started in 14 games and played in all 15 for the Bulldogs during a COVID-altered 2020-21 campaign, leads a trio of juniors looking to help the trio of Bulldog seniors in guiding their young teammates through the rigors of over 20 regular-season games facing teams ranging from CIML Metro favorite Des Moines Roosevelt to 5A powers like West Des Moines Valley, Southeast Polk and Dowling Catholic in CIML crossover challenges.

"This first week of practice was like our 10th week of practice last season. We're starting over and doing a lot of things differently, but I think it's all for the better," Coram said. "There's no hesitation from the freshmen right now, which is pretty amazing. I remember as a freshman, it was not that easy. I feel like these freshmen are going to understand the pace of the game so much better. It's going to benefit us in the long run."

With 10 underclassmen blending in with six upperclassmen, only two of which have experience as varsity starters, there's likely to be some growing pains as the Bulldogs embark on a new season. Ottumwa will play in a Hall-of-Pride scrimmage with Knoxville next Thursday, participate in a closed-door practice with Eddyville-Blakesburg-Fremont on the Saturday after Thanksgiving and play in eight regular-season games prior to the two-week holiday break.

"That schedule before Christmas has some tough games. Fort Madison was a 17-win team that returns two or three of their top players from last season," VandenBerg said. "We've got Urbandale in there, Southeast Polk, Fairfield who returns a lot from a team that was one win away from state.

"We also have a couple CIML Metro games with Des Moines East and Des Moines Hoover in there that will hopefully allow our girls to get their feet underneath them before the break. We break down our season into thirds. We have that first third in the eight games before Christmas, then you have the next eight games after Christmas. By the time you get to that final third, you're in that playoff push. We need to take that first third of the season, gain that experience and build on it during that second third so we have that experience by the time we hit that final stretch of the season. At that point, the question will be what do we do with that experience?"