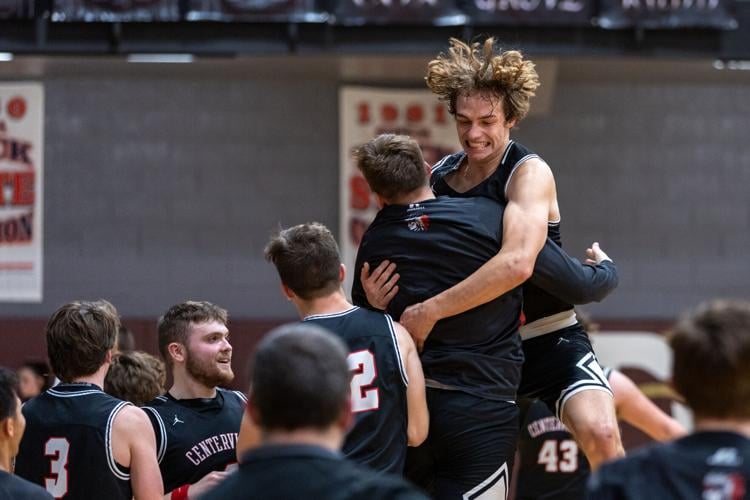 Centerville's Ryan Sinnott and teammates celebrate a 59-57 win over Davis County on Tuesday, Jan. 10 in Bloomfield. 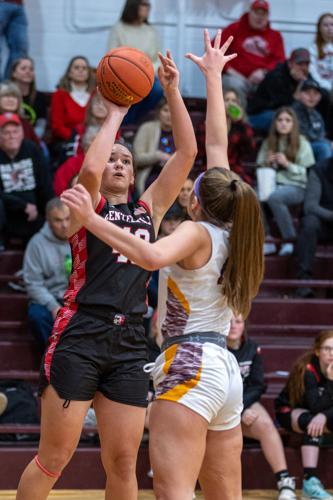 Centerville's Ryan Sinnott and teammates celebrate a 59-57 win over Davis County on Tuesday, Jan. 10 in Bloomfield.

BLOOMFIELD — Two gritty basketball games ended with Centerville pulling past Davis County late both times Tuesday, giving the boys and girls basketball squads each a sweep over their neighboring foes.

Despite trailing by 10 points at the start of the third quarter, the Centerville girls held the Mustangs to five points in the fourth, ultimately winning 52-47. It contrasted with the result in the first matchup between the two in December, where Davis County had won 68-59.

Centerville's Adriana Howard lead all scorers with 18 points on the night, adding 19 boards for a double-double. Teammate Rhegan McDanolds just missed a double-double of her own, with 13 points and 9 rebounds.

The Centerville girls (7-5, 4-4 SCC) traveled to Cardinal on Friday as the Courier went to press. Davis County (5-8, 3-5 SCC) also competed on Friday hosting fourth-ranked (2A) Eddyville-Blakesburg-Fremont.

In the nightcap, the Big Reds overcame a dismal second quarter and staged a late-game comeback to win 59-57.

Centerville trailed by one point with six seconds remaining. After receiving an inbound pass, Daniel George shot a three-pointer that hit the back of the rim, bounced into the air, then came down rattling around some more before finally traveling through the net.

The buzzer sounded as the Centerville Big Reds rushed the floor in celebration. But not so fast. Officials met at center court and ultimately added 1.2 seconds on the clock after it was determined Davis County had called a timeout before time expired.

The celebration would only be temporarily interrupted, however. Davis County inbounded the ball with a heave to half court, followed by another heave from there to the basket. The ball was off the mark and the buzzer sounded, this time for real.

The Centerville boys (2-10, 2-5 SCC) headed to Cardinal while the Davis County boys (1-9, 0-8 SCC) hosted Eddyville-Blakesburg-Fremont in SCC action on Friday as the Courier went to press. The Centerville basketball teams will host Chariton on Tuesday while Davis County steps out of conference this weekend for a trip to Keosauqua to face Van Buren County.