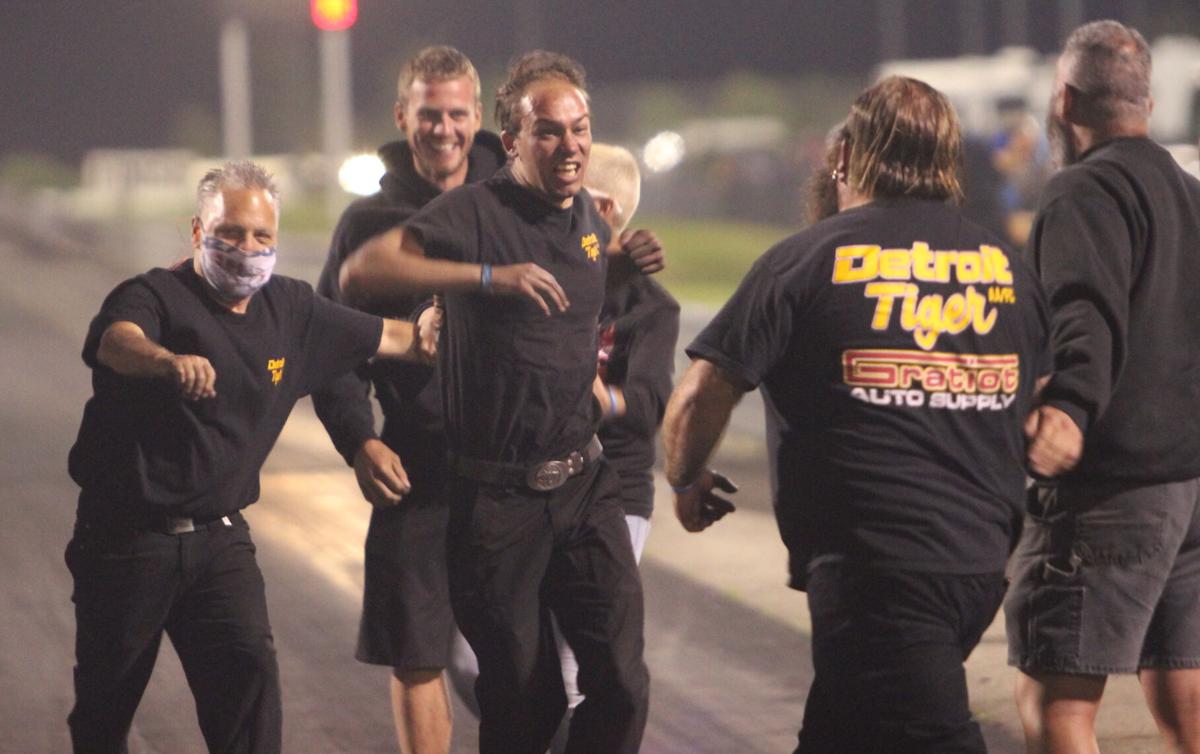 Crew members of Steve Timoszyk celebrated on Saturday night at Eddyville Raceway Park after Timoszyk’s winning run in the finals of the A-field during the Funny Car Chaos Championship second tour stop of the season. 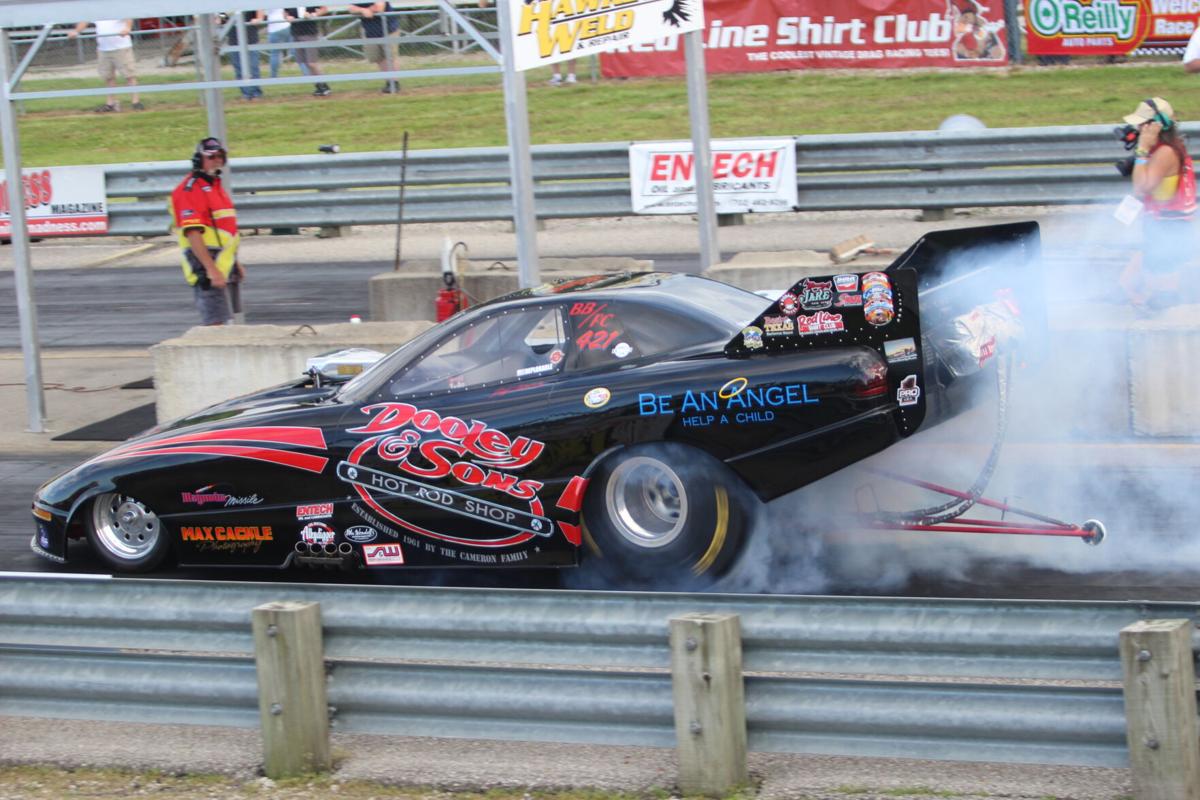 Jeff Cameron prepares for his elimination round race on Saturday during the Funny Car Chaos Championship tour stop at Eddyville Raceway Park. 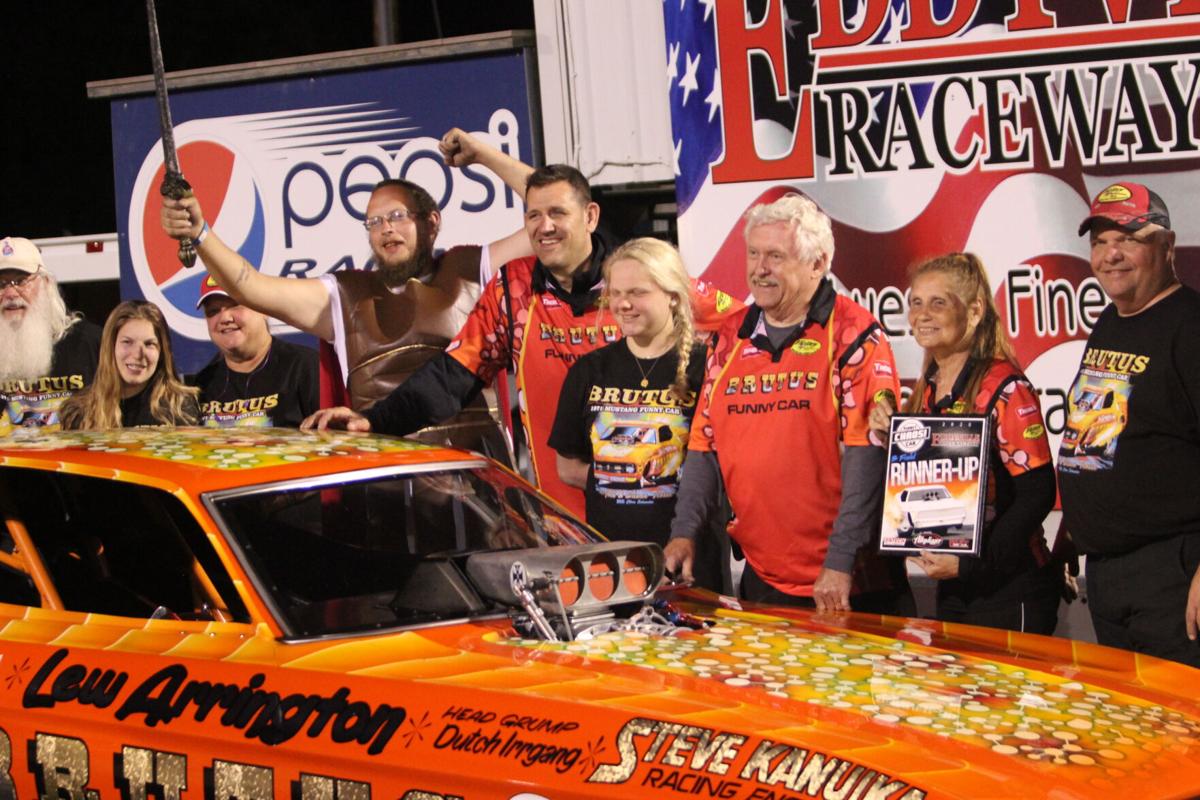 Pit crew members of Chris Schneider (far right) celebrate after placing second in the B-field of the Funny Car Chaos Championship tour stop at Eddyville Raceway Park on Saturday. Nicknamed ‘Brutus,’ the crew of Schneider includes their own personal Trojan solider that helps get the crowd revved up prior to start of each race.

Crew members of Steve Timoszyk celebrated on Saturday night at Eddyville Raceway Park after Timoszyk’s winning run in the finals of the A-field during the Funny Car Chaos Championship second tour stop of the season.

Jeff Cameron prepares for his elimination round race on Saturday during the Funny Car Chaos Championship tour stop at Eddyville Raceway Park.

Pit crew members of Chris Schneider (far right) celebrate after placing second in the B-field of the Funny Car Chaos Championship tour stop at Eddyville Raceway Park on Saturday. Nicknamed ‘Brutus,’ the crew of Schneider includes their own personal Trojan solider that helps get the crowd revved up prior to start of each race.

EDDYVILLE — Steve Timoszyk may very well be the only Detroit Tiger that is able to return to action in 2020.

Timoszyk made the most of his return to the track over the weekend, bringing home the winner’s check from the ‘A’ Main of the Funny Car Chaos Championship tour’s stop at Eddyville Raceway Park. The first of three major races to be held at the 1/8-mile Southeast Iowa drag strip marked a return to racing for the tour after opening the season back in Lufkin, Texas March 13-14 shortly before the coronavirus pandemic forced several events to be rescheduled.

“It’s good to be back home, because that’s what this is for all of us,” Timoszyk said. “We love doing this. It’s what we live for.”

The Michigan native capped an eventful two days in Eddyville, beating Chuck Loftin in the finals. Timoszyk jumped out to an early lead and held off a late charge, leading to an immediate celebration on the other end of the track from the crew members. It was the most recent of the many celebrations that Timoszyk’s crew had each time their driver advanced through his three elimination-round races on Saturday.

Timoszyk’s slowest pass of eliminations with a 4.26 seconds at 173 miles per hour proved to be enough to hold off Loftin, who posted a 4.49-second run down the strip at 169 miles an hour. Loftin made the most of what proved to be nearly a full week of work centered around the racing in Eddyville, beginning his journey for the two days of racing in southern Iowa from his home in Seguin, Texas last Wednesday before beginning his 15-hour trip back home on Sunday.

“It felt good to get out of the house,” Loftin joked. “It was a very good weekend. I loved every minute of it. We were a little rusty when we got started with qualifying, but we got in a good rhythm and started knocking them out.”

The last driver Loftin had to knock out to get to the finals was defending series champion Ken Singleton, who won the only race of the season and seemed poised to make it two straight victories in Eddyville. The native of Chickasha, Oklahoma posted the top qualifying time of 3.75 seconds and 204 miles an hour and matched both marks in eliminating Levi Keenan during Saturday’s quarterfinal round.

Singleton was poised to advance to final even without crossing the finish line ahead of Loftin as a jump start would have caused a disqualification in the semifinal race. Needing only to cross the finish line without a violation of his own, Singleton instead made contact with the final cone that separated the lanes, a lane violation that led to the ‘first or worst’ ruling that threw out Loftin’s red light and disqualified Singleton.

“That was pretty intense,” Loftin said. “Ken’s a tough competitor. You can’t cut him any slack. We popped the motor up. We threw a bunch weight on the clutch. We had to do something to run with him.

“We staged it kind of deep and red-lit the start, so I figured the race was over. He got into some trouble and crossed the center line. That’s a worse infraction and it put it back in the final. They (race officials) had to make a decision, so it took a few minutes, but they got it handled.”

It was hardly the only drama that occurred on the way to Saturday’s grand finale. Three drivers that posted initial qualifying times to run in the A-field eliminations were unable to advance as parts attrition took its toll on Chris Foster, who posted the third-fastest qualifying time, Chicago native Chris King and Mount Pleasant native Jeff Krug who had an oil filter failure early in the second qualifying session on Friday night, leading to a massive amount of oil coating one lane at Eddyville Raceway Park resulting in the remainder of the session being run in a single lane.

Keith Jackson, who posted the 10th-fastest qualifying time and would have run in the B-field, bumped up to the A-field and advanced to the semifinals only to be knocked out by Timoszyk. Jackson had perhaps the scariest moment of the weekend as his parachute lever bracket failed after his run of 165 miles an hour down the track, resulting in Jackson racing off the track and deep into a neighboring corn field, the second time in three years that has happened to the Lakewood, Colorado native.

John Umlauf won an all Show-Me-State showdown in the B-field final with Chris Schneider as the Missouri drivers held their ground during the elimination rounds after posting the top two qualifying times. Schneider busted off his best reaction time of eliminations with a .073 while Umlauf was a bit tardy with his worst reaction time of eliminations at .194, but a fast race to the finish saw Umlauf make the pass prior to the finish line, winning in 4.16 seconds at 170 miles an hour to the 4.51-second, 159-mph run of Schneider.

“He had the faster car, plain and simple,” Schneider said. “We were trying to pull the rabbit out of the hat. We got a little overzealous and it spun on me halfway down the track. He’s faster and we had to do something. We tried. That’s what we came here to do.”

All told, 25 drivers from 12 different states descended on Eddyville with several pit crew members packing the grounds at ERP, including several that watched the action from the grandstands. Funny Car Chaos will move on to race at the Alamo City Motorplex in San Antonio June 12-13 while Eddyville Raceway Park will welcome fans back to the stands for the first time this season on Saturday with test-and-tune for anyone and bracket classes for Junior Dragsters, a class that featured a winning effort this past weekend from Baxter 15-year-old Bailey Littell, a soon-to-be high school sophomore.

“My dad has raced before and we kind of got back into it,” Littell said. “My brother has also helped me out a lot too. I’ve had a couple of wins, but this was my first win of this season. It will be pretty cool to see the fans back out here next time I race. It’s great to see those people that support you out of the corner of your eye before you take off down the track.”

Gates open at 1 p.m. Time trails begin at 3 p.m. Kids are admitted free to the track.

“We’ve got a lot of big events coming up in July,” ERP manager Gerald Kramer said. “There are still going to be some challenges ahead, but not nearly as big as the challenges we’ve already faced this season.”

Did not qualify for elims

EXCELSIOR SPRINGS [mdash] Eileen Jeanette Knowles, 80, of Excelsior Springs, Missouri passed away July 2, 2020 at her home. Born June 12, 1940 in Ottumwa, IA to George and Evelyn (Wright) Bortz, Eileen attended and graduated from Ottumwa High School where she was a cellist all three years in…