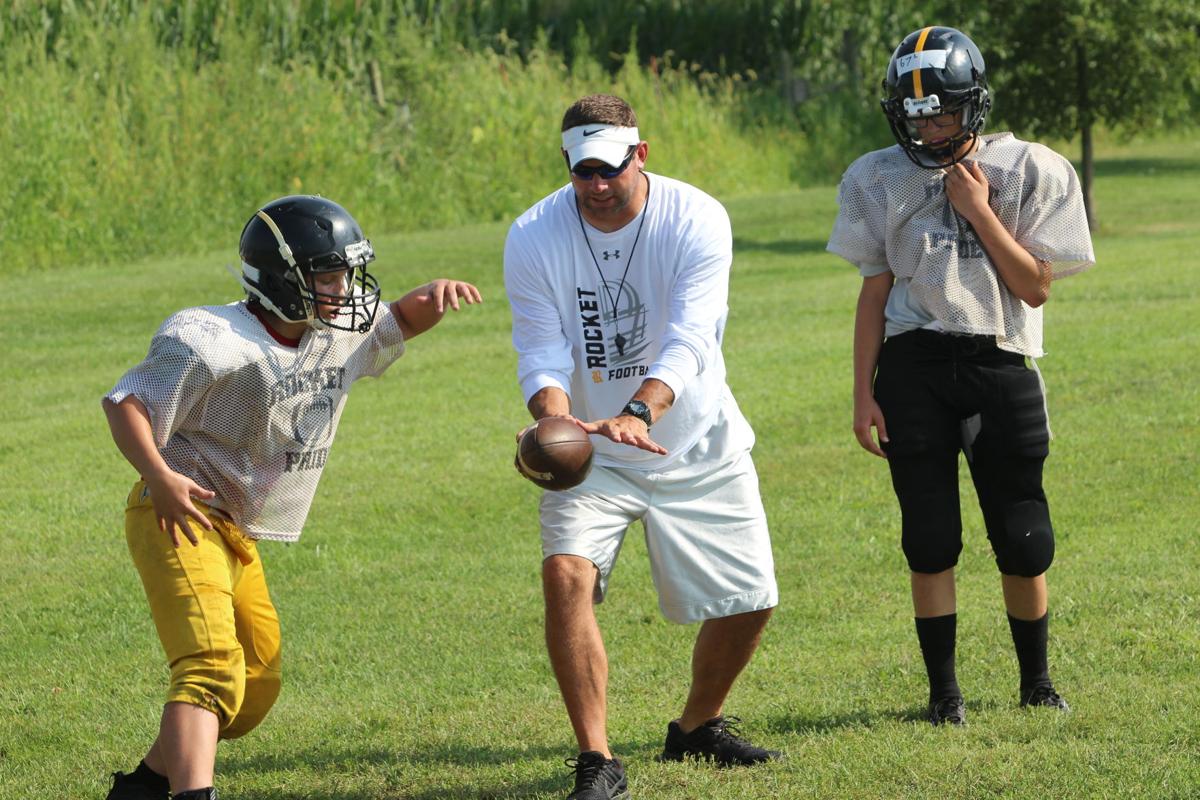 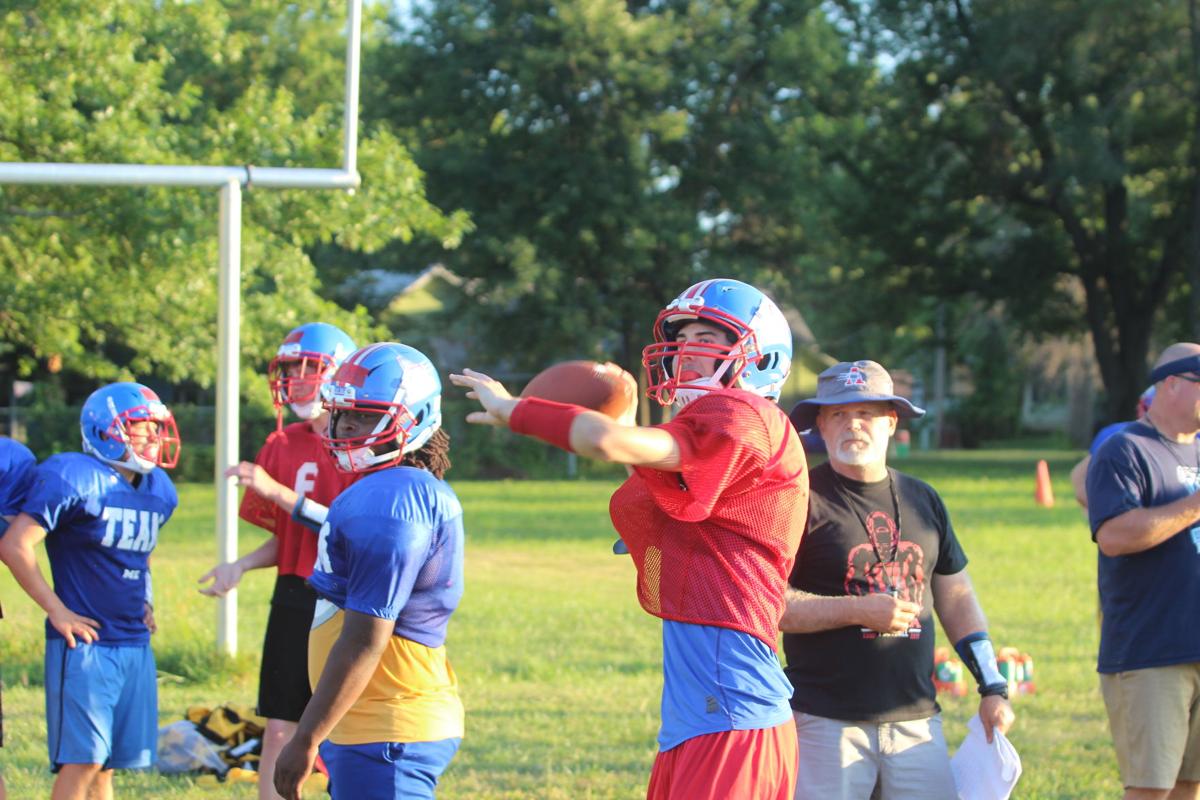 Albia junior quarterback Blake Chance winds up to throw a pass during practice for the Blue Demon football team earlier this month. 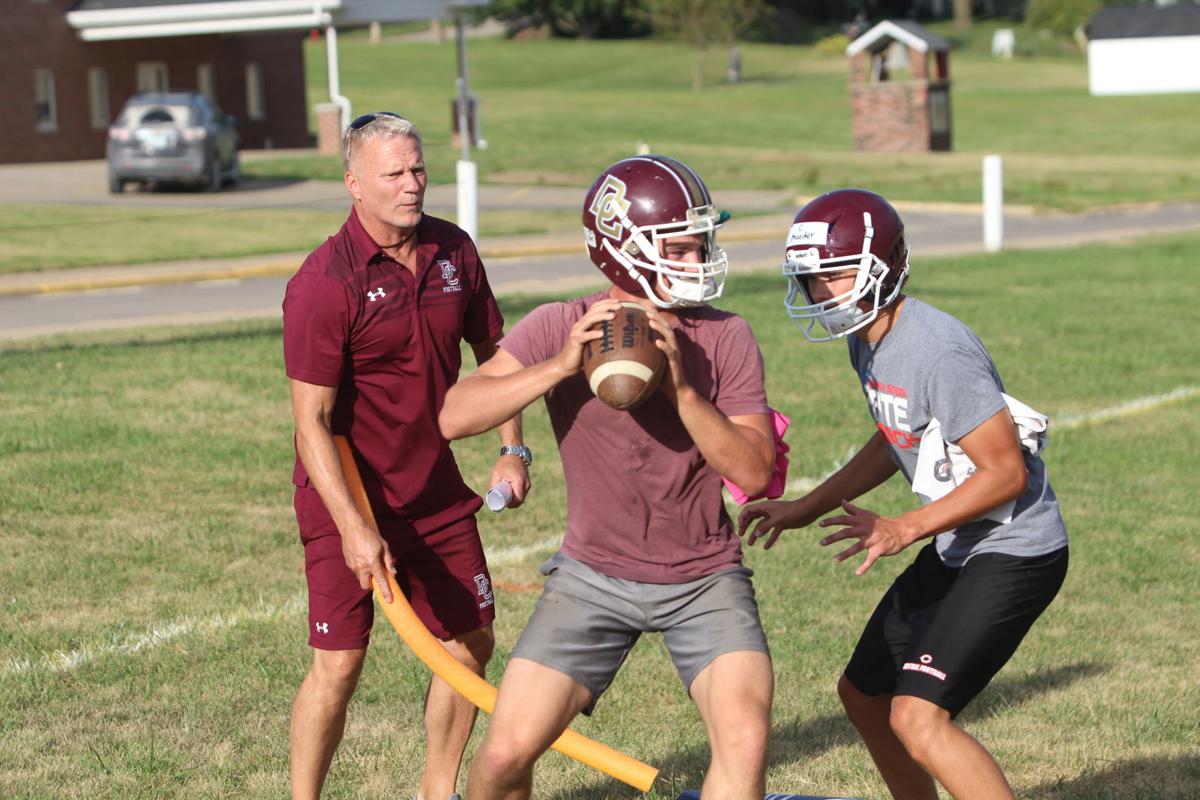 Albia junior quarterback Blake Chance winds up to throw a pass during practice for the Blue Demon football team earlier this month.

OTTUMWA — Brian Koehler was right on the money from day one of the 2018 season.

“All we want is a shot against Williamsburg in that last game of the season with Williamsburg,” Koehler said last August.

Koehler and the Eddyville-Blakesburg-Fremont Rockets got their wish. The Class 2A, District 6 title was ultimately on the line when Williamsburg made the trip to Ike Ryan Field on week nine of the 2018 high school football season.

One week earlier, the Albia Blue Demons had the same opportunity as the Rockets, needing just one home win over the Raiders to win the district crown and earn a playoff berth.

What the Blue Demons, Rockets, Davis County Mustangs, Mid-Prairie Golden Hawks and Central Lee Hawks all found out last season was just how truly difficult it would be to take down the Raiders. After starting 0-3 last season, Williamsburg steamrolled their way into the postseason going 5-0 in district play winning by an average margin of 40 points including a 41-0 shutout at Albia and a 54-21 victory at EBF in the game that ultimately decided the district title.

The Raiders established themselves as the team everyone in 2A, District 6 will be gunning for. Hopes of a district championship, and automatic playoff berth and potentially a clearer path to the UNI Dome ultimately will come down to one things for teams like the Mustangs, Blue Demons and Rockets.

The first team in Class 2A, District 6 that will get a shot at taking down the Raiders may still have some of its best football on the horizon. Kent Anderson did restore a sense of optimism to his alma mater as Davis County went 3-6 in 2018, coming up a touchdown short of three more wins including a triple-overtime loss at Albia decided on a tiebreaking extra point that effectively ended any postseason hopes for the Mustangs.

“We’re trying to do the same things as last year. We’re wanting to practice fast. We don’t want to condition at the end of practice. We want to condition during practice,” Anderson said. “We’re also going to have the seventh and eighth graders practice with the varsity team. They’ll all learn the same basic plays and work on the same techniques so, by the time they’re juniors, we want them to have the same reps. We want to be one entire program running the same system, which puts our current upperclassmen in the position where they have to show what right looks like from the very first day.”

Davis County will have to find a way to make up for the graduation of quarterback Draven Dekraai, who racked up 2,171 total yards of offense and accounted for 23 total touchdowns. Carson Maeder, a sophomore, and senior Caden Hill have been working with Anderson in preparation of taking over the reigns as signal caller for the Mustangs.

“We had 18 seniors out of our 34 players, so you have to work hard to make up for that experience that has graduated,” Anderson said. “The good news this year is, while we’re a little younger, we’re up in numbers. We’re going to be able to replace those seniors with a little more depth. The biggest thing for us is to get some of the kids that are new to the team up to speed.”

Besides Maeder and Hill, Davis County returns Caeden Glosser who matched senior Trevor Slayton last year with three touchdown receptions as a freshman. Up front, the Mustangs also have some tough talent including senior tight end Reegan Warning who caught 14 passes for 156 yards and sophomore Spencer Boas, a 6-3, 280-pound lineman that should help give quarterbacks time to throw and running backs room to run up front.

“It’s always going to be about the basics for us,” Anderson said. “We’re always going to take a long-term approach and the long term starts with the fundamentals. We did a lot of things with window dressing, running some trick plays and doing things more for fun, but people tend to lose track of the fact that we work on the basics. We’re trying to teach fundamentals and hustle. We’re trying to build a program from the inside out.”

Expectations return for Big Blue in 2019

It’s been four years since Jerry Staton took the Albia football program to the top of the Class 2A statewide rankings, going 12-1 in 2015 with a third straight trip to the UNI Dome for the state football semifinals. For the first time since that season, hopes are high for the potential success the Blue Demons can have on the gridiron heading into a season.

After winning just five games in the two seasons since that trip to Cedar Falls, Albia came within one win of a district title before finishing the second season under co-head coaches Justin Huber and Scott Farrington at 4-5. The Blue Demons also have something no other team in 2A, District 6 has, a returning 1,000-yard passer with junior Blake Chance bringing an even stronger arm into the 2019 season after throwing for 1,563 yards and 17 touchdowns as a sophomore.

“We talked last year after that game with Williamsburg about how far you have to come in order to play for a district title,” Huber said. “It didn’t go our way last year, but that experience and knowing how close we were to that ultimate goal sparked something within our team. I think they feel like this could be a special year for us.”

While Albia did graduate each of Chance’s top four receivers from last year, young players including Nate Wynn and Blake Stewart have been stepping up as potential go-to receivers heading into 2019. Facing Chance in practice has allowed players like Wynn and Luke Bossard a chance to practice defending the pass, giving the Blue Demons a chance to have a dangerous secondary heading into 2019.

“We did lose some really good players, but there were a lot of players that got a lot of great experience on the field that are returning,” Huber said. “We have great talent at the skill positions that we’re counting on to give us some big-play abilities. The guys put the work in during the offseason. Nothing really changes with what we’re going. We’re excited for this season.”

Montez Ellis is also looking to step up as Albia’s top running back after making just one run for 13 yards in varsity action last season. The Blue Demons hope for a better start in non-district play after opening 0-3 before winning four straight games leading into the district championship showdown with Williamsburg.

“If we can get to six or seven wins, we can make the playoffs,” Huber said. “If we can at least get a split of our four non-district games (Centerville, Chariton, Sigourney-Keota and Pleasantville), we’ll have a real chance at making that run.”

Rockets look to earn one more shot at extending season

EBF ultimately got its shot at Williamsburg. Aided by Mid-Prairie’s season-closing victory over Albia, the Rockets simply needed one win on week nine last year over the Raiders to extend its season and give a talented group of seniors a chance to play postseason football.

“Football is a sport that has no comparison,” Moore said after passing for 272 yards and three touchdowns, finishing his senior season with 1,824 total yards passing and 18 scores. “The brotherhood you have with every single one of your teammates every Friday night coming out playing in front of your fans under the lights is something you can’t compare anything else to.”

The Rockets simply want one more crack at Williamsburg, but will have to work hard to get it. Combined, EBF returns just 126 total rushing yards among four players, led by Ethan Olivas who had the only other rushing touchdown not scored by Moore last season on a scoring dash made against Davis County in a 29-21 win at Bloomfield.

Olivas also caught 14 passes for 334 yards and a team-leading seven touchdowns while handling the kicking duties for the Rockets. EBF also returns Isaiah Smith, who accounted for 123 receiving yards, a 15-yard touchdown catch, two interceptions and a huge opening fumble recovery against Williamsburg.

Kalen Walker, who qualified for the Drake Relays and placed at the state track meet in the 2A boys 100 and 200 meter dashes, should add some speed to the mix for EBF. If the Rockets can navigate a non-district slate that includes a tough home contest with Chariton and a road trip the following week to Sigourney-Keota, EBF might be poised to make a run at the postseason with four straight winnable district games.

“We’re going to be young and we’ve got a lot of new faces to plug into different places, but I like where our team is at,” Koehler said. “We’re not really changing anything we do. We’re just adding another layer to it. Our underclassmen are hungry to show people that picked us to finish dead last in the district to step into the roles of those seniors and get it done.”

Class 2A District 6 at a glance

Outlook — The Blue Demons have an experienced defensive team, and will focus on stopping the run with a new defensive coordinator. Offensively, Albia lost five of six starters at skill positions, so new players will have to step in. The team may start slowly, but looks to improve throughout the season as the experience takes shape.

Outlook — The Hawks are hoping last season’s young team matured after a winless campaign. Depth is an issue for the team, as is a difficult schedule that will feature two Class 3A schools right away and a Class 1A playoff qualifier. Success will be based on the team’s ability to compete and overcome adversity, which it struggled with last season.

Outlook — The Rockets return plenty of talent, but are a bit inexperienced when it comes to varsity playing time. Having the same system in place for the past couple year will help with the development of the program.

Outlook — The Golden Hawks return Tornow, who threw for over 800 yards a season ago, as well as most of the defensive line. The team is young, but there is decent depth at the skill positions.