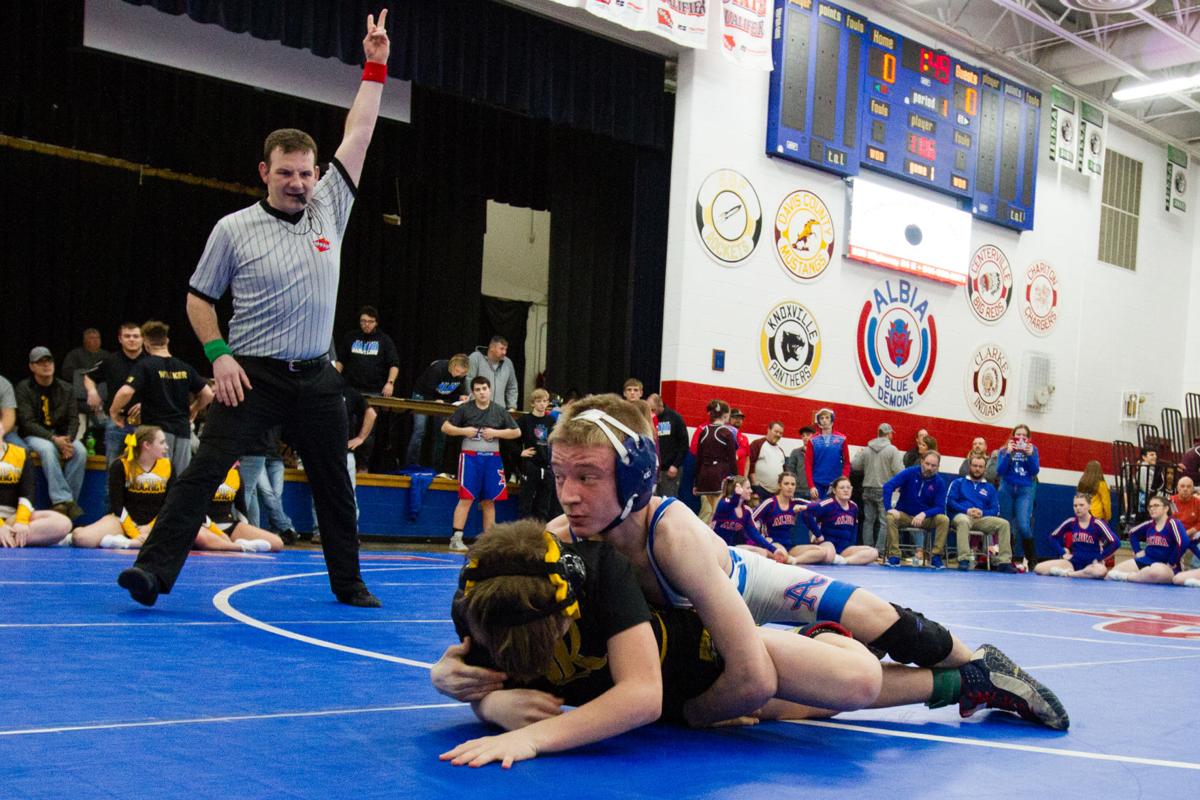 Albia sophomore Carter Anderson scores two points with a takedown against Eddyville-Blakesburg-Fremont freshman Tyler Schutt during a 106-pound semifinal match at the Class 2A, Sectional 9 wrestling tournament in Albia on Saturday afternoon 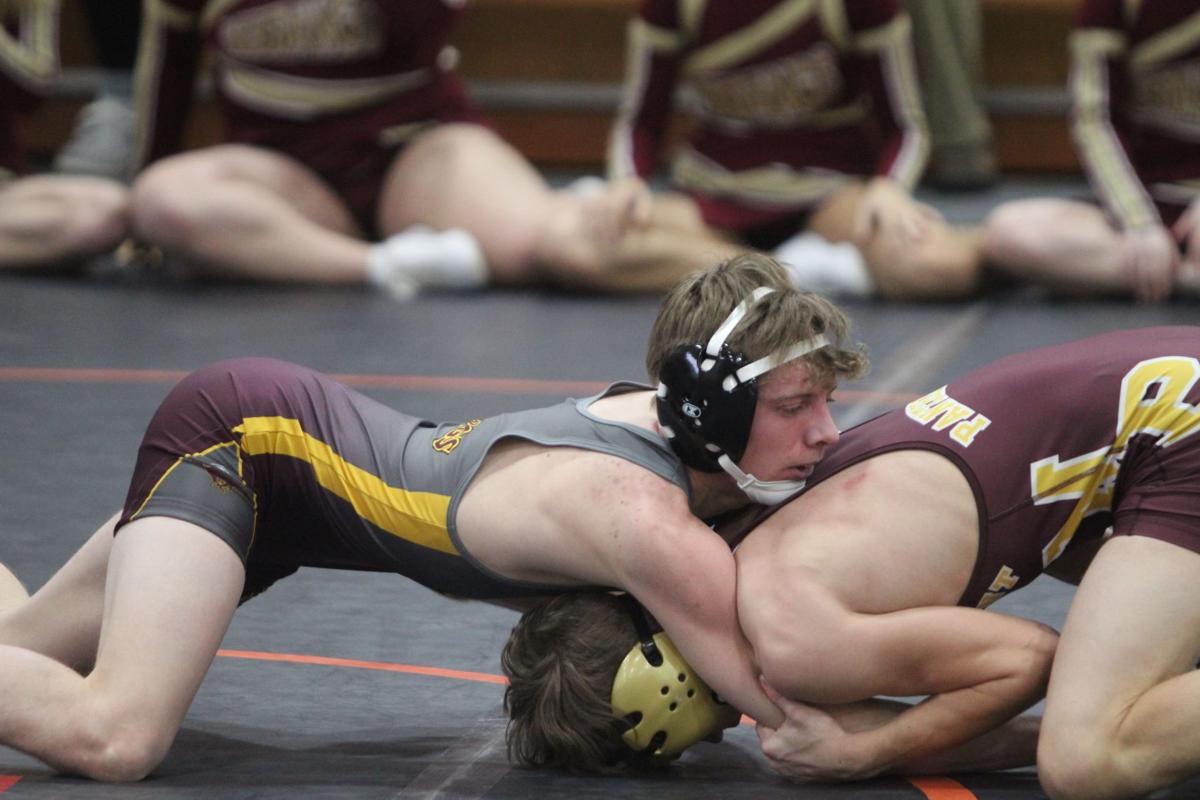 Davis County sophomore Taylor Huggins (left) clamps down on a headlock against Mount Pleasant sophomore Carson Coleman during the 120-pound championship match at the Class 2A, Sectional 16 prep wrestling meet on Saturday in Fairfield.

Albia sophomore Carter Anderson scores two points with a takedown against Eddyville-Blakesburg-Fremont freshman Tyler Schutt during a 106-pound semifinal match at the Class 2A, Sectional 9 wrestling tournament in Albia on Saturday afternoon

Davis County sophomore Taylor Huggins (left) clamps down on a headlock against Mount Pleasant sophomore Carson Coleman during the 120-pound championship match at the Class 2A, Sectional 16 prep wrestling meet on Saturday in Fairfield.

FAIRFIELD — There are different roads that can be taken to qualify for the Iowa High School State Wrestling Tournament.

Some wrestlers accelerate down the road to Wells Fargo Arena. Albia sophomore Carter Anderson, for example, moved halfway to securing a return trip to state on Saturday in less than three minutes.

Others, like Fairfield junior Peyton Cline, could only sit and watch for a time with his postseason fate out of his hands. After losing to Solon senior Zeb Gnida in the 152-pound championship match at the Class 2A, Sectional 16 tournament, Cline watched Mount Pleasant sophomore Chayse Irving and Keokuk junior Kaleb Spurgeon battle deep into the final period with Spurgeon needing a takedown to force an all-or-nothing wrestleback for a district tournament berth.

Spurgeon’s bid to extend his season fell short. Irving caught Spurgeon with 11 seconds left and scored a decisive fall, making Cline the fourth member of the Fairfield wrestling team to advance to districts next week in Washington. The final fall was celebrated across the gymnasium at Fairfield on Saturday as Trojan wrestling coaches lifted Cline high in the air just moments after losing to Gnida.

“It’s pretty stressful at this point, but all you have to do at the end of the day is wrestle hard,” Cline said. “The sport doesn’t love anybody. Anything can happen. It’s just part of the sport.”

Albia, wrestling in the 2A, Sectional 9 meet at home, finished fourth with 160.5 points on Saturday. The Blue Demons matched Eddyville-Blakesburg-Fremont with six district qualifiers on Saturday highlighted by Anderson as the fifth-ranked sophomore improved to 33-2 on the season winning the 106-pound sectional title for the Blue Demons by pinning EBF freshman Tyler Schutt in 1:28 and Knoxville freshman Marco Alejo in 55 seconds.

“We had a solid day,” Albia head wrestling coach Dave Wenger said. “Obviously, we would have like to qualify all of our guys, but at the end of the day, we were fairly pleased with the way that things turned out.”

Anderson will be joined by Albia teammates Dawson Bonnett (113), Brodie Connor (120), Michael Thomas (138), Barrett Bonnett (145) and Gavin Shaw (170). All five Blue Demons finished second in their respective weight classes with Bonnett securing the sixth district berth for Albia, pinning Knoxville senior Koby Gordon at 1:35 of a true wrestleback after falling to Sales, 11-5, in the 145-pound final.

“As we look forward to next Saturday in Knoxville, we will really focus on each wrestler individually to give them the things they need to transfer on to the following week,” Wenger said. “It’s really no secret as to what each of them have to do. We just have to make sure to have them properly prepared both from a physical and mental standpoint. That is what we will focus on as the week progresses.”

The only South Central Conference team that did not wrestle in Albia had four wrestlers qualify for the district round on Saturday at Fairfield. Davis County finished fifth in the 2A, Sectional 16 tournament with 126 points, just three behind Fairfield for fourth place and five shy of Washington for third with Dawson Townsend (106), Taylor Huggins (120), Marcus Elam (132) and Caden Hill (195) advancing to wrestle next week in Washington for state berths.

Townsend (26-4) and Huggins (31-6) both won sectional championships with Townsend pinning Washington freshman Jack Kleese in just 28 seconds while Huggins wrestled his way to a 5-2 decision against Mount Pleasant sophomore Carson Coleman in the 120-pound finals. Elam held on to second place despite losing by fall in the 132-pound final to Fairfield junior Cohyn Roach (14-11) while Hill closed out the meet bouncing back from a 7-1 loss in the championship match to Solon sophomore Gage Marty pinning Fairfield sophomore Cesar Castellanos in just 46 seconds of the final wrestleback of the day.

The Trojans will send four wrestlers including Roach to districts. Zach Westercamp won the 113-pound sectional title for Fairfield, improving to 19-9 with an 8-2 win in the finals over Mount Pleasant freshman Bowen Davis while junior teammates Logan Adam (145) and Payton Cline (152) advanced with second-place finishes on Saturday.