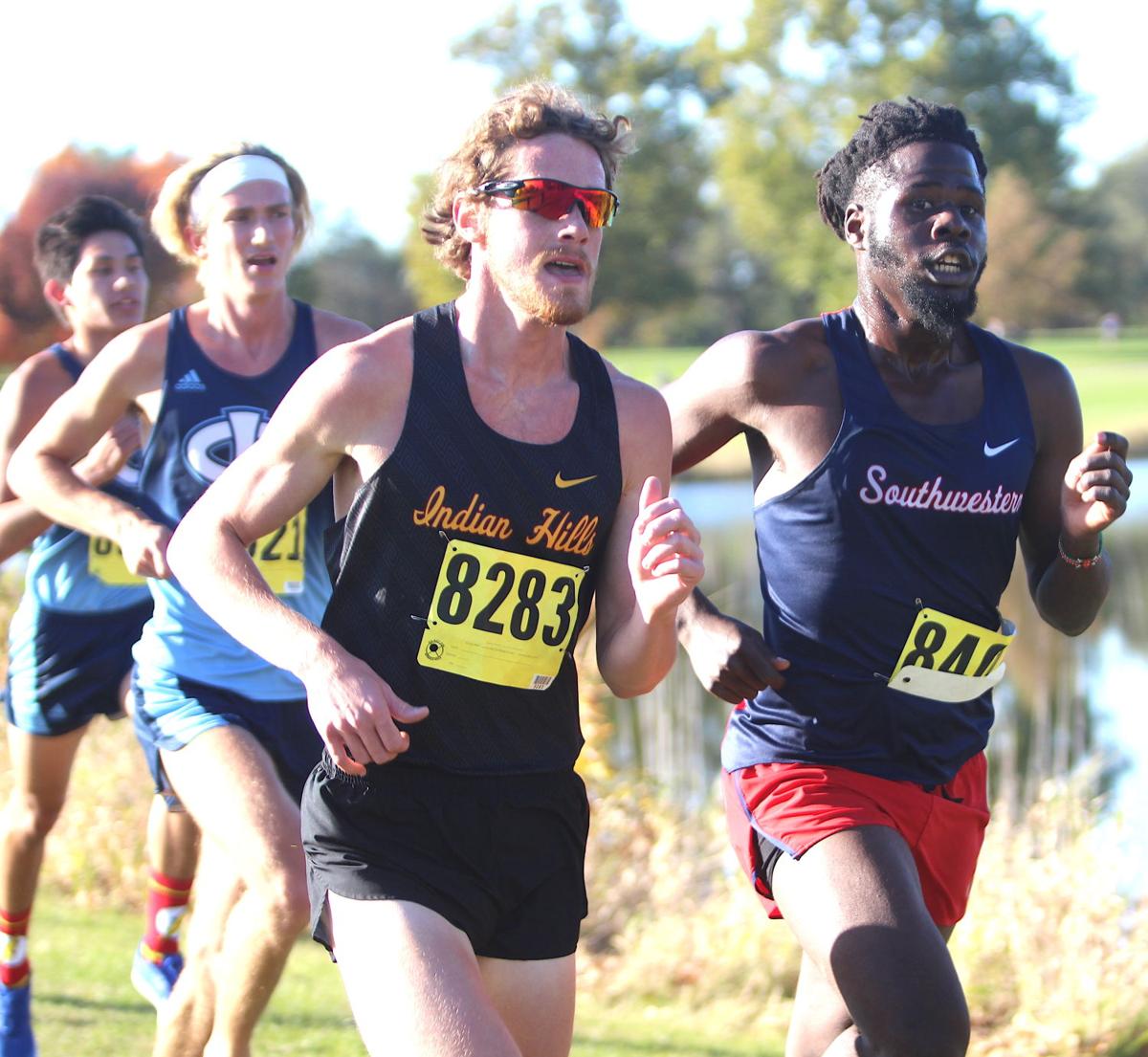 Conner Riley, middle, heads down the Cedar Creek Golf Course in Ottumwa while running for Indian Hills Community College during the Region XI men’s cross-country race this past October. 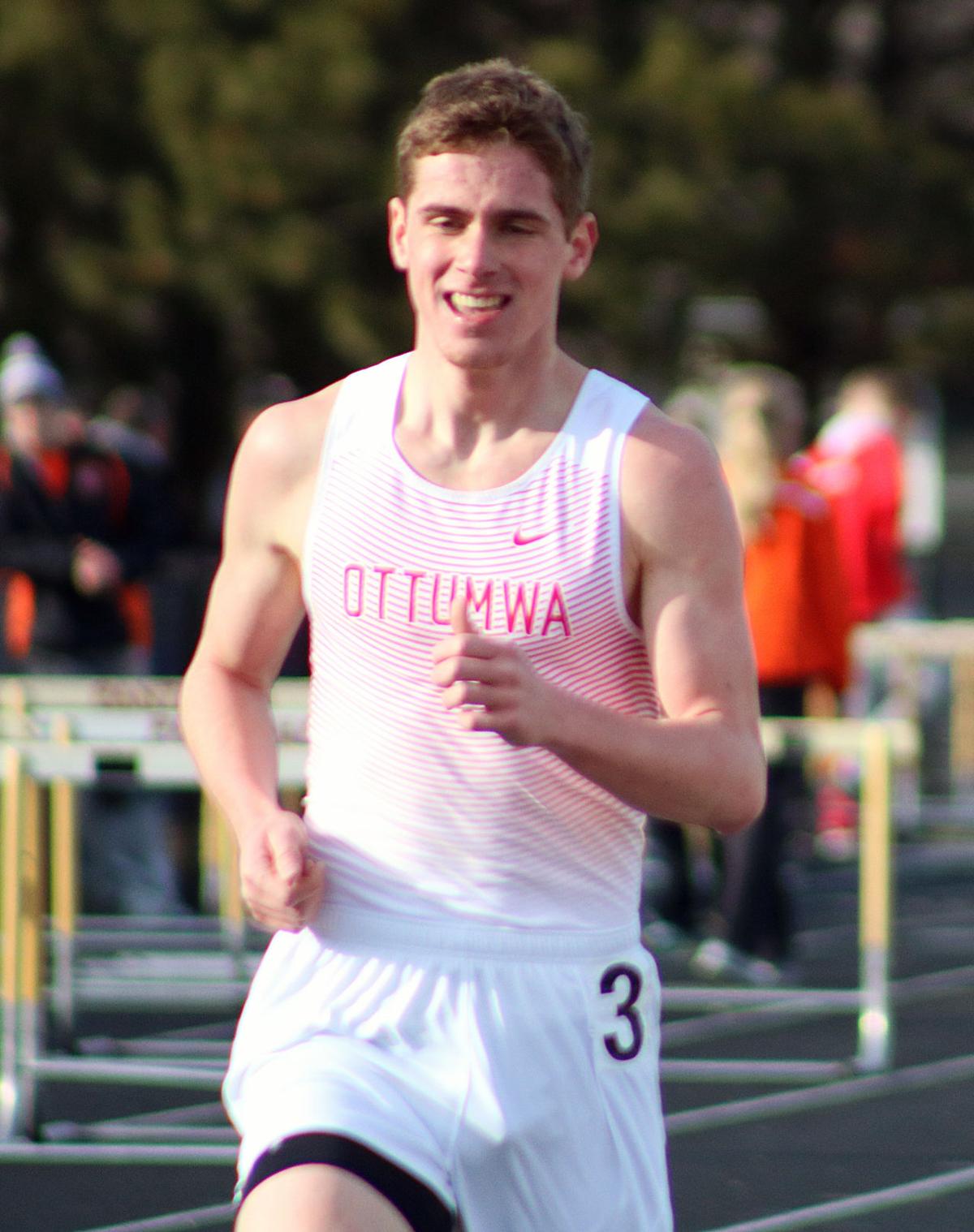 Conner Riley, seen here running to a win for the Ottumwa boys track and field team in the 1,600-meter run in 2018, will become a Bulldog once again after committing to run at Drake University.

Conner Riley, middle, heads down the Cedar Creek Golf Course in Ottumwa while running for Indian Hills Community College during the Region XI men’s cross-country race this past October.

Conner Riley, seen here running to a win for the Ottumwa boys track and field team in the 1,600-meter run in 2018, will become a Bulldog once again after committing to run at Drake University.

OTTUMWA — Running on the big blue oval at Drake Stadium has been a yearly goal for Conner Riley going back to his days as an Ottumwa Bulldog.

Now, Riley is about to call the big blue oval his home track for the next two years. Ottumwa’s former state-qualifying distance runner is headed to Drake University after running the past two years at Indian Hills Community College.

“In high school, everyone dreams of getting to the blue oval at the end of the season to run in the Drake Relays and then state,” Riley said. “You just need to really compete hard to get there. To be able to call it my home now is remarkable and incredibly special to me.”

Riley qualified for the Iowa High School state track and field meet, running in the Class 4A boys 1,600 meter run and the 4x800 relay as a senior. That season was a special one in the history of the Ottumwa High School program as the Bulldogs won the CIML Metro conference team championship for the second time in program history despite not having a home track to practice or compete on throughout the 2018 season.

Having that success despite those training limitations could prove to be very useful for Riley, who had his sophomore season of outdoor track and field at IHCC erased by the coronavirus pandemic. Track and field athletes across the country are currently in charge of their own training with school facilities closed.

“Everything kind of happens for a reason,” Riley said. “Hopefully, there’s a lot of good still to come. I know, in the past, what it means to having to really focus on training with obstacles.

“There’s always going to be obstacles in life, whether it’s sports or other aspects of life. Trying to find ways around those obstacles is what’s going to help you be successful. It’s something we’re all trying to do right now.”

Besides shining on the track, Riley became one of the top men’s cross-country runners at Indian Hills. This past fall, Riley set a new school record for the best time produced in a men’s cross country race, finishing the 5K course at Wartburg College in 16:13 to place 12th at the John Kurtt Invitational.

“Conner’s time was over 45 seconds faster than his previous showing at the Region XI Time Trial two weeks earlier,” said Indian Hills running coach Brent Ewing. “Conner showed up ready for a challenge. Although it was a small field, he took advantage of the fast pace set by the Wartburg runners. He definitely has a lot of momentum right now.”

Riley earned all-region honors for the IHCC men’s cross-country team this past fall. On the track for the Warriors, Riley went from running the 1,500 outdoors as a freshman to posting the third-fastest time in the 5,000 meter (16:20) and followed the program’s second-fastest men’s 3,000 meter time of 9:06.03 this past winter during the indoor season.

Riley also led Indian Hills in the NJCAA Half Marathon this past fall, posting a time of 1:15:59 over a course in El Paso, Texas, that stretched just over 13 miles. That versatility is something Riley hopes will help Drake immediately next season.

“I’m going to be a kind of a guinea pig. I’ll pretty much run wherever they tell me to,” Riley said. “I imagine I’ll probably start out running a 5K. I’ve even heard about possibly running a 10K on the track. I’ve never done that before, but I’m looking forward to seeing how that goes.

“I’ll do and run whatever Drake needs me to run. It’s definitely been a process to get to this point. Rome wasn’t built in a day, but I’ve been very fortunate to have great coaches, great teammates and a great family to help support me along the way. I wouldn’t be where I’m at without them.”

Riley is hoping to continue building on a successful season for the Drake men’s track and field team in distance races. Issac Basten won the Missouri Valley Conference men’s 3,000-meter indoor title while Maximillan Fridrich brought the 5,000-meter conference crown back to Des Moines before the Bulldogs had the outdoor of the track and field season canceled by the coronavirus. Both runners will return next season.

“I’m still trying to figure out my best race. I think, whether it’s cross-country or track, there’s a lot of great potential there to see what I can do,” Riley said. “I’ve noticed that, the more I run, the more I move up in distance. I was more of a middle distance guy when I was an underclassman in high school, then I transitioned to distance. It just seems like I keep moving up.”

Riley continues to work on adding to his distances and improving his distance runs around Ottumwa, finding different places and running different routes around town to put his skills to the test. Riley had hoped to be competing in the NJCAA national outdoor track and field championship this month in his final season at Indian Hills.

“All of us athletes in every sport, we love to compete and we want to compete,” Riley said. “It’s not fair with everyone facing the hardships they’re facing right now. That takes precedent over our desire to compete.

“I just really hope that things go well. Everyone that’s been affected by COVID-19 continues to be in my thoughts and prayers.”