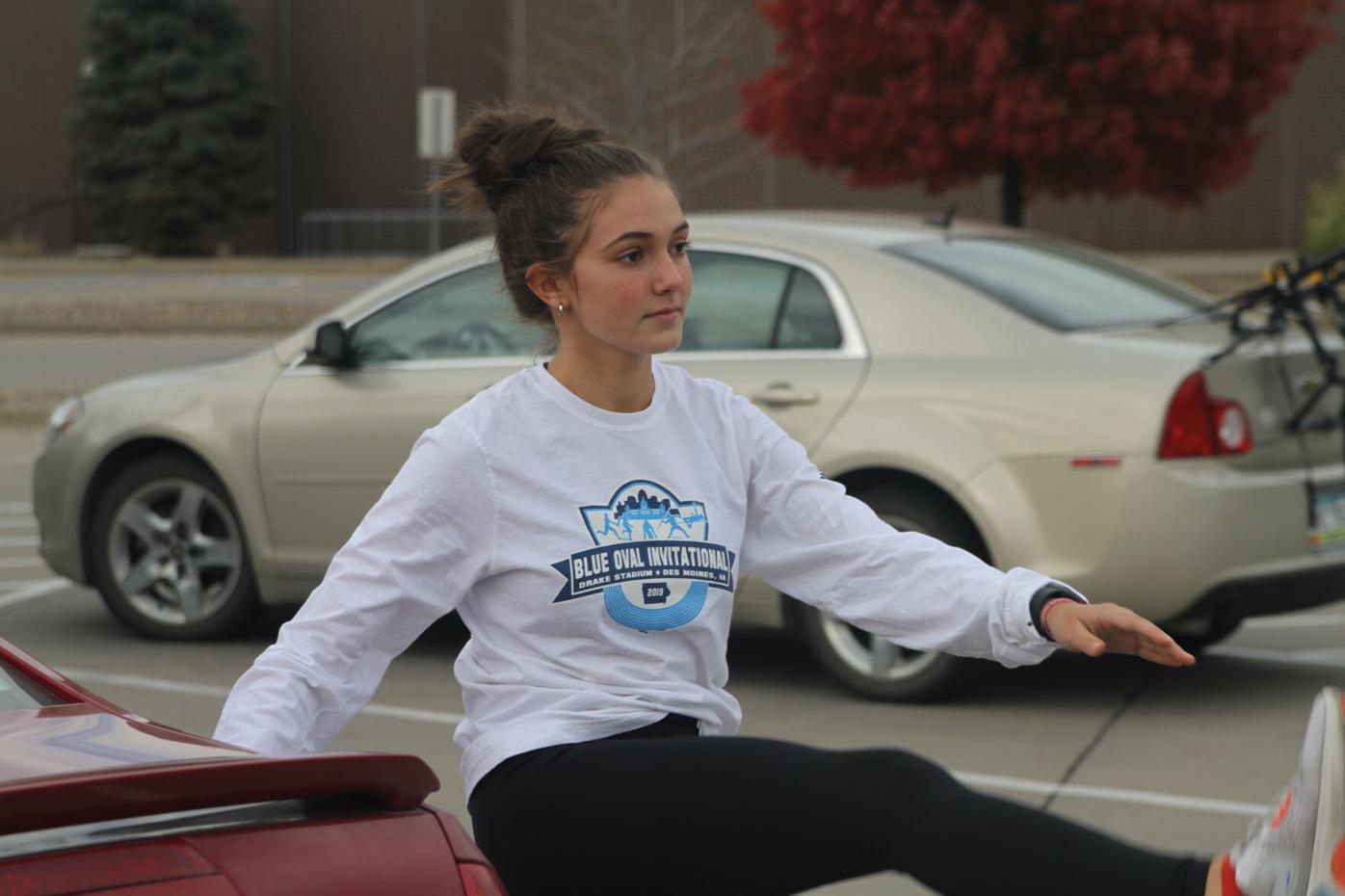 Ottumwa High School senior Meghan Coulter gets warmed up while preparing for practice on Wednesday afternoon outside the Bridge View Center. Coulter will run in the Class 4A girls race at the Iowa High School State Cross-Country Meet in Fort Dodge on Friday morning at 10:30 a.m. 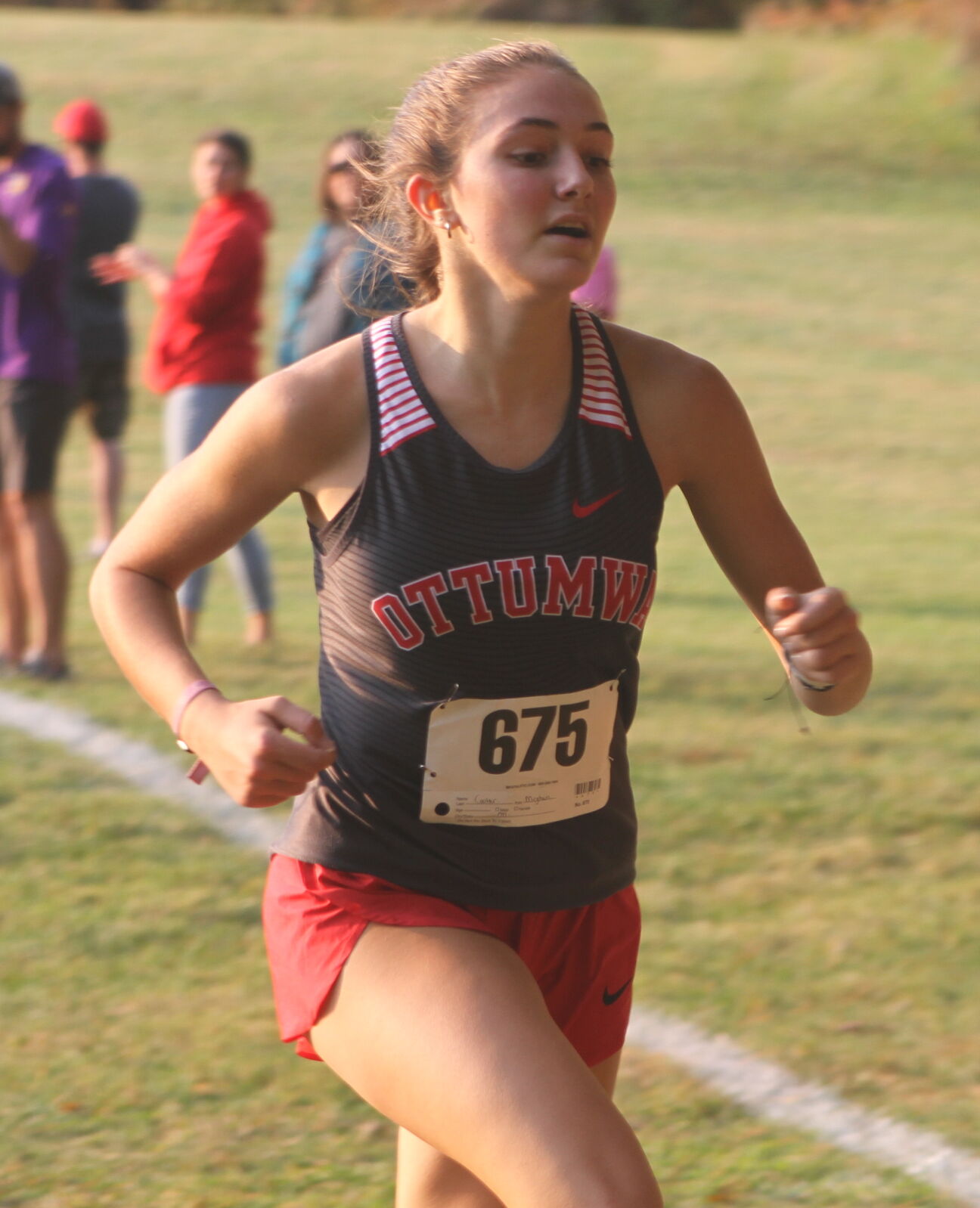 Ottumwa High School senior Meghan Coulter heads down the course during girls cross-country action for the Bulldogs earlier this season.

Ottumwa High School senior Meghan Coulter gets warmed up while preparing for practice on Wednesday afternoon outside the Bridge View Center. Coulter will run in the Class 4A girls race at the Iowa High School State Cross-Country Meet in Fort Dodge on Friday morning at 10:30 a.m.

Ottumwa High School senior Meghan Coulter heads down the course during girls cross-country action for the Bulldogs earlier this season.

OTTUMWA — Two miles into last week's Class 4A state qualifying race, Meghan Coulter still needed to make up a lot of ground in order to make it to Fort Dodge.

The Ottumwa High School senior was sticking to her strategy, running her race and was back in to the pack needing to pass several runners in order to earn her ticket to state. Coulter was facing the very real possibility of running her final high school cross-country mile at the Southeast Polk course, which also would have Ottumwa's bid to send at least one runner to the Class 4A girls state race for a sixth consecutive season.

"I was somewhere back around 30th place at one point," said Coulter, who needed to finish in the top 15 in order to qualify for state. "I was really scared I wouldn't be able to make that up. My family and my coaches were telling me I was right where I needed to be."

Fortunately for Coulter, the final mile of the course at Southeast Polk gave the Ottumwa senior an opportunity to rally for a state berth. With closing hills to take on, Coulter made her move passing nearly 20 runners to vault all way into the top 10, placing ninth in 20:37.2 to earn her first state cross-country berth in her final high school cross-country season.

"That's when I made my move, on those two big hills," Coulter said. "I've always kind of found that hills are my strong suit. I knew, going to Southeast Polk, that hilly course would work to my advantage. We do a lot of hill workouts during the summer and throughout the year. Having those hills during that race really got me where I needed to be."

Coulter credits the strategy developed and motivation provided to her before the race to Ottumwa head girls cross-country Kristin Mitchell, who reminded her senior captain of how much the state qualifying course would play to her strengths going into last Wednesday's meet. One year earlier, Coulter would up 26th at the state qualifying race as a junior finishing in 20:50.5 on the flatter Marshalltown Community College course.

One year later, finding herself in the same position with one mile left, Mitchell saw the all the work Coulter has put in over the past year pay off vaulting from missing the state meet by nearly a minute to finishing over 18 seconds ahead of the 16th-place runner, Dowling Catholic sophomore Meredith Schultz, to earn a ticket to run at state.

"I can see it every day in our workouts. There are things I see every day. One of the ways that Meghan has grown is her ability to remain calm even when you find yourself back in the pack a little bit," Mitchell said. "To go from 25th to ninth the way she did takes a certain amount of confidence. Kylie (Latham) used to do that a lot when she ran. I think that's something she's watched as the years have gone by and something she learned to do as the years have gone by."

Latham started this current run of Ottumwa state cross-country qualifiers, making the first of her three consecutive trips in 2015. Latham's third and final trip to state came when OHS qualified as a team in 2017, Coulter's freshman year which included the second of four trips for Alli Bookin-Nosbisch and the first of three straight trips for Carollin Mellin, all former Coulter teammates that have stayed in close contact with the current Bulldog senior runner this season.

"We still have the group chat from my freshman year, so on the day of the state-qualifying meet, Kylie, Carollin, Alli and Grace (Bookin-Nosbisch) were all sending out messages," Coulter said. "They wanted to let us all know they believed in us and that we just needed to go out there and have fun. As soon as the race was over, I had huge messages on my phone from everyone.

"It made me really happy to know that, even though they're all off in college now and have their own lives, they're still keeping track of how I'm doing and are still there to lend their support whenever I need it."

Coulter will look to continue the tradition of Ottumwa runners doing well at state. Latham placed in the top 10 twice at state, finishing fifth in her senior season leading the Bulldogs as a team to a 14th-place finish in the 2017 4A girls state meet while Bookin-Nosbisch joined Latham as Ottumwa's second all-state cross-country runner last year by placing ninth in her final run for the Bulldogs.

Whether or not Coulter finds a place on the all-state podium in her final run for the OHS cross-country team, the goal is to finish with her best time having set a career mark earlier this year in the CIML Iowa Conference meet in 19:44.5. The flatter course in Fort Dodge will provide Coulter a chance to run a faster pace with the hope that it will be good enough to contend for a place in the top 15.

"I've run against some of the best athletes in the state over the past few weeks. I don't want to be too hard on myself with where I finish. I just want to have a good fun race," Coulter added. "The best advice I've gotten this week is to have confidence in myself. That's going to be the main thing. Just knowing that I can push myself even harder. I know the strategy behind this race. I just need to believe in myself."