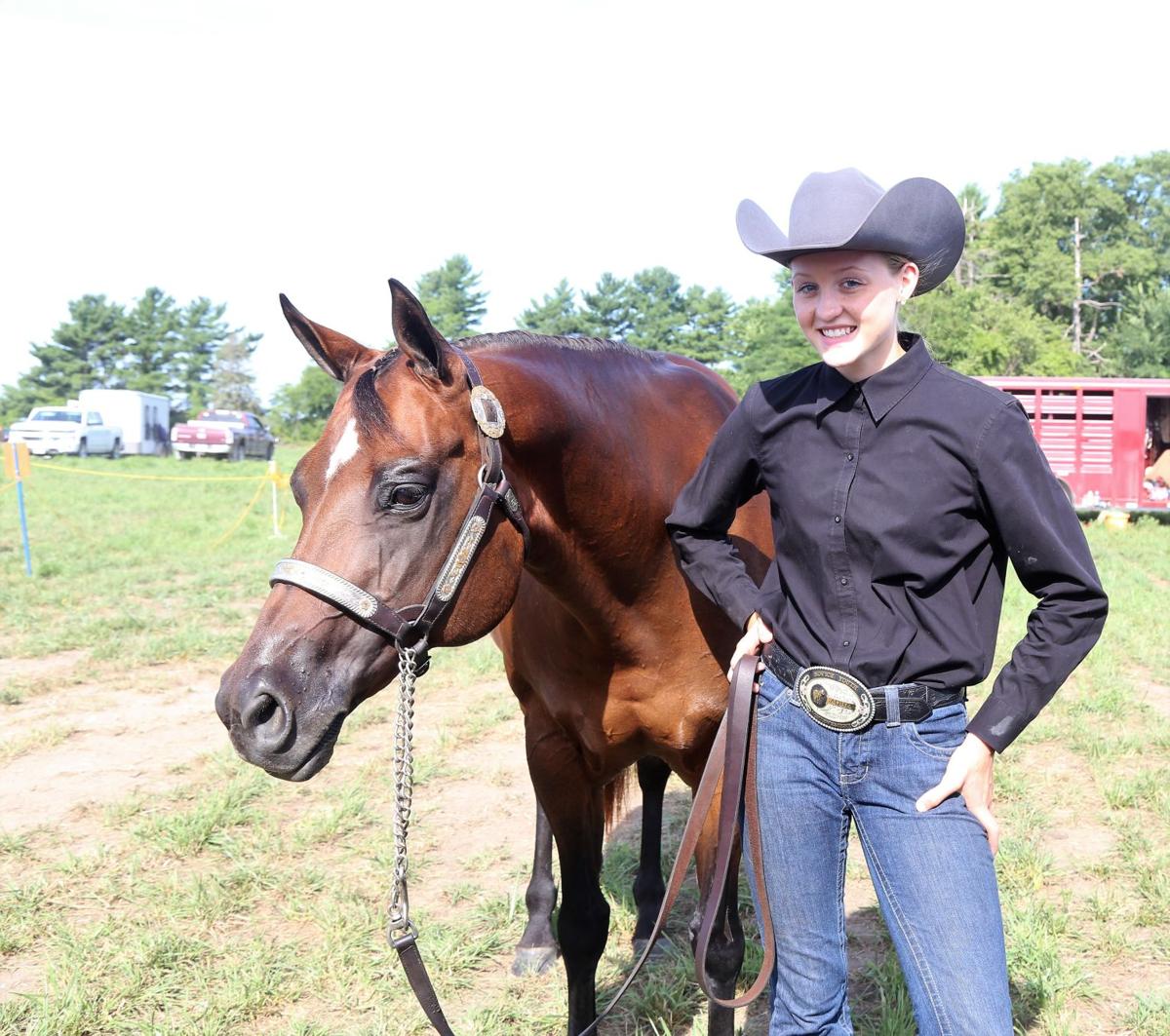 Lily Anderson, pictured here prior to a horse show in her hometown of Ottumwa in June of 2018, is back home after completing her first year competing in college equestrian at Southern Methodist University (SMU), earning All-American honors as a freshman. 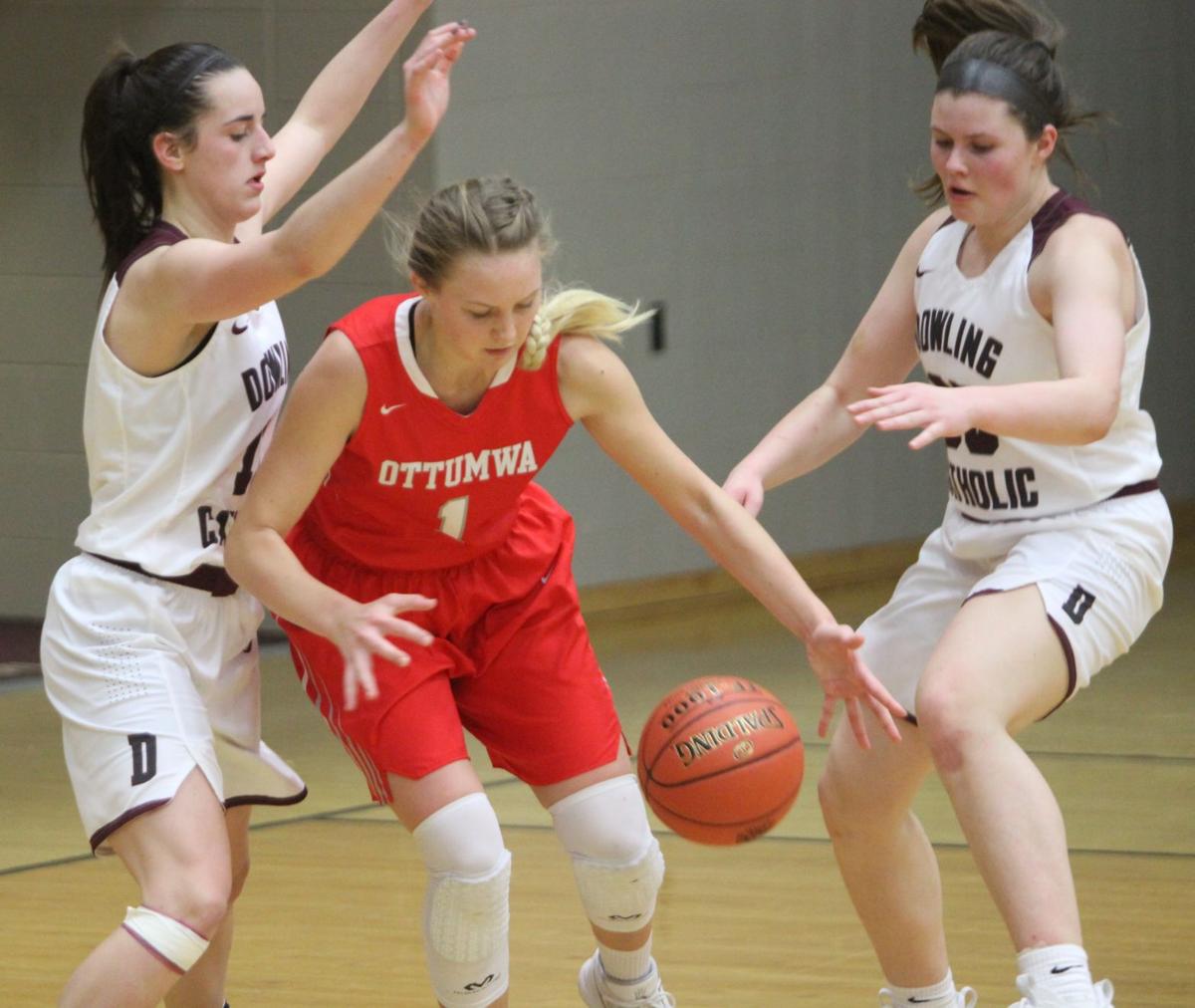 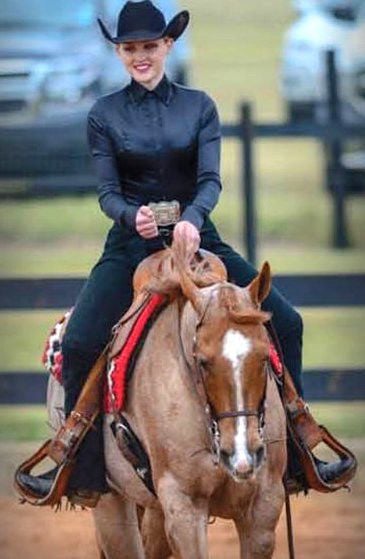 Lily Anderson, seen here competing for Southern Methodist University in equestrian, earned All-American honors as a freshman this past season.

Lily Anderson, pictured here prior to a horse show in her hometown of Ottumwa in June of 2018, is back home after completing her first year competing in college equestrian at Southern Methodist University (SMU), earning All-American honors as a freshman.

Lily Anderson, seen here competing for Southern Methodist University in equestrian, earned All-American honors as a freshman this past season.

OTTUMWA – Lily Anderson is back home in Ottumwa these days.

Like so many college students, Anderson is taking her classes online to close out the academic year. Like many college athletes, the former Ottumwa High School all-state basketball standout is dealing with a sudden and disappointing end to her athletic season due to the coronavirus that brought all college athletics to a close in mid-March.

“It was really disappointing. We made it through the regular season, but we didn’t get a chance to compete in either conference or nationals,” Anderson said. “We had also been climbing in the rankings. I feel like we had a chance to do something special.”

It’s not March Madness that Anderson is referring to, however. The former Bulldog is back home after completing a successful first year competing at Southern Methodist University in Dallas in the sport of equestrian, a sport that requires a different type of teamwork between animals and humans with riders on horses competing in a series of events including Equitation on the Flat, Equitation over Fences, horsemanship and reining.

“We are an NCAA sport, so we get all the same perks that the football players and the other traditional sports do,” Anderson said. “Being able to compete this past year for SMU was really fun.”

In her freshman year as a college rider, Anderson was one of four Mustangs to earn NCEA (National Collegiate Equestrian Association) Ariat All-American honors. Anderson made history along with Megan Waldron as SMU’s first ever Horsemanship All-Americans.

Anderson an honorable mention Horsemanship All-American, finished her freshman season with a 7-3 record with an MOP (Most Outstanding Player) honor at Fresno State, helping SMU secure an 8-4 regular-season record.

In the same performance, which proved to be the final competition of the season, Anderson earned SMU’s highest Horsemanship score of the season at 77. Anderson was named the Eastern College Athletic Conference’s event Rider of the Week twice.

“From our first meet in the fall to the final meet in the spring, I had a totally different mental approach to it,” Anderson said. “I just felt a lot better about competitions.”

In horsemanship, the horse and rider perform a pattern in which different maneuvers and the horse’s different gaits are exhibited. The base score for a pattern is 70, and the judge will score each of the 7-9 maneuvers, adding or subtracting 1.5 points based on either above-average or poorer execution.

Penalties are given if a horse kicks out, lopes on the wrong lead, or otherwise detracts from the uniformity of the performance. It is possible for a rider to receive a score of zero if mistakes such as going off-pattern (adding or subtracting elements from the original pattern) are made.

Anderson scored above 70 in nine of her 10 competitions, averaging over 74 points competing on nine different horses. Unlike her previous experience competing in the sport, college equestrian riders have their horse selected at random on the day of each show.

“It’s a lot different than how I would personally show,” Anderson said. “Outside of the home meets, I wouldn’t know any of the horses. You get a short warm-up, then just hop on. A lot of what we practice is how to be adaptable, how to figure out a different horse every time you ride and how to quickly come up with a plan.”

Fortunately, Anderson is no stranger to adaptation as an athlete having battled in the post for four seasons as a member of the Ottumwa girls basketball team. It was her mental strength as much as her physical abilities that allowed Anderson to go from averaging 1.7 points and 1.3 rebounds a game as a freshman to becoming the first Bulldog player in seven years to earn all-state honors, being selected to the Class 5A third team by the Iowa Print Sports Writers’ Association last winter.

Anderson was named the captain of the 2019 All-Courier girls basketball team after averaging 15.7 points and 8.2 rebounds per game as a senior, ranking 15th and eighth, respectively, in Class 5A in 2019. Anderson also finished second in 5A in free-throw attempts (159), third in made free throws (110), third in blocked shots (50) and posted seven double-doubles (points and rebounds).

Outsized by an opposing center, however, did a lot to prepare Anderson for the challenges she’s faced in equestrian.

Working against opposing centers on the basketball court is one thing. Working with a 1,200-pound animal with almost no time has truly tested Anderson’s ability to remain cool under pressure.

“You get a four-minute warm-up before you go show the horse at the away meets,” Anderson said. “It’s another live animal that will definitely let you know if you’re nervous or hesitant in any way.”

Ultimately, Anderson used the skills she developed on the basketball court to produce a successful first season competing with new horses in a new environment over 1,000 miles away from her hometown. For Anderson, one lesson taught to her by former Ottumwa head girls basketball coach Kevin Patterson stuck out this past season at SMU.

“He always told us to be mentally tough,” Anderson said. “It’s something K-Pat always said to us. It applies to horses too. You just have to relax and be tough enough to get through it.”

Anderson is continuing to be mentally tough back home as so much of everyone’s day-to-day life is uncertain due to the ongoing coronavirus outbreak. Athletic departments including SMU’s are hoping to resume competition for all teams in 2020-21 with nothing guaranteed as government officials continue seeking answers in how to combat COVID-19.

The coronavirus has not kept Anderson off her horse, continuing to train with her sister and trainer Heather Lind in Des Moines. Besides competing at SMU starting next fall, Anderson is unsure what her summer looks like with original plans to compete in shows being scrapped at the moment.

“Several of the shows I was planning on going to have already been canceled,” Anderson said. “Right now, it all depends on when things start to open back up again. Nothing would be definitive at this point.

“It was crazy just moving from Ottumwa to Dallas this past year. It was a big shock. Adjusting to my academics, the practices and the meets was also quite an adjustment. All the coaches at SMU are so helpful. We’ve got so many resources to help us. It was a challenging transition, but I had amazing people there for me.”