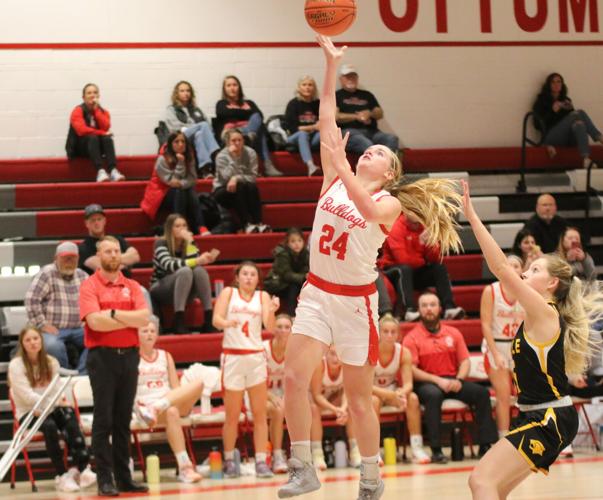 Ottumwa sophomore Brylee Jaeger (24) drives to the basket during the Iowa Hall of Pride Scrimmage on Thursday at Evans Middle School Gymnasium in Ottumwa. 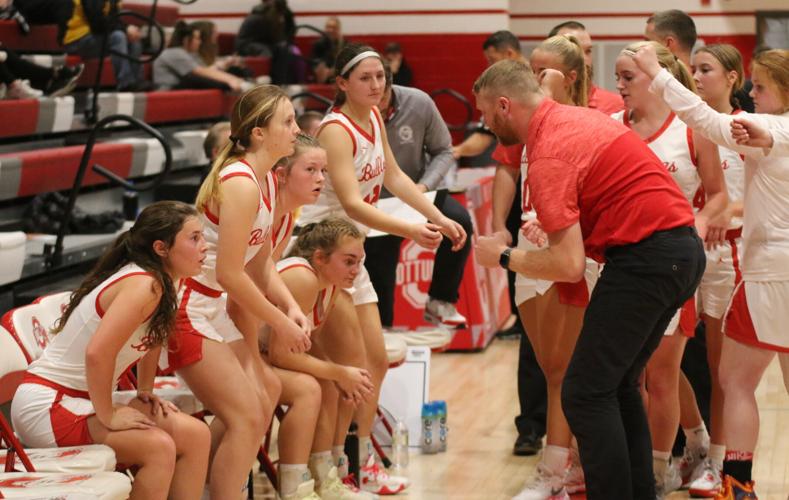 Ottumwa head girls basketball coach Joe VandenBerg instructs the Bulldogs during the second half of the Iowa Hall of Pride Scrimmage on Thursday at Evans Middle School Gymnasium in Ottumwa.

Ottumwa sophomore Brylee Jaeger (24) drives to the basket during the Iowa Hall of Pride Scrimmage on Thursday at Evans Middle School Gymnasium in Ottumwa.

Ottumwa head girls basketball coach Joe VandenBerg instructs the Bulldogs during the second half of the Iowa Hall of Pride Scrimmage on Thursday at Evans Middle School Gymnasium in Ottumwa.

OTTUMWA — If only the Iowa Hall of Pride Scrimmage had a fifth quarter.

The way things were going on Thursday night, the Ottumwa girls simply needed more time to overcome a slow start against Knoxville.

Despite not scoring a point in the entire fourth quarter, Knoxville was able to hold off the Bulldogs to earn a 40-32 win in the last preseason tune-up for both basketball teams. Ottumwa was able to score the final 13 points of the night against the Panthers, nearly staging an epic comeback just four days before returning to the floor at Evans Middle School Gymnasium to tip off the regular season Monday against Fort Madison.

"We talked at halftime about coming out, winning the quarter then winning the half," Ottumwa head girls basketball coach Joe VandenBerg said. "We played even in the third quarter, then we won the fourth quarter, so we've built some momentum up for Monday.

"I thought the girls made some adjustments, which was good. We tightened things up and went from allowing 20 points in the first quarter to 20 points in the final three quarters. There are still some things to work on. We talked as a coaching staff about doing a better job slowing the game down and make the game easier by seeing what we have available to us."

Thursday's scrimmage with Knoxville, who won the same scrimmage over the younger Bulldogs last season by 17 points, started out with similar signs of inexperience that plagued Ottumwa last season. With seven freshman on the varsity roster, the Bulldogs were tested every single night against teams that much more experience throughout a 6-17 campaign.

Ottumwa averaged 30 points and 25.7 turnovers a game last season with five freshman playing in at least 20 of the 23 games. Turnovers again plagued the Bulldogs early in Thursday night's scrimmage, allowing the Panthers to go on a 17-0 run in the first quarter to open a 20-2 lead.

"It was definitely a struggle last year going straight from middle school basketball to varsity basketball," said Brylee Jaeger, one of the OHS sophomores that played in at least 20 varsity games as a freshman. "We know going forward that we're going to need to control the basketball much more this season. We played a lot of basketball together over the summer. I feel like we've got a chance to be a stronger, more well-rounded team."

That became evident as Thursday's scrimmage continued. Jaeger finished with a team-high 11 points hitting shots from the high post, 3-point territory and twice drove in for breakaway lay-ups off fourth-quarter steals as Ottumwa outscored Knoxville 29-20 over the final 24 minutes.

"We talked about our roles on the team at the end of last season. I knew that we'd all have to step up with our leading scorer (Addison Ransom) graduating," Jaeger said. "I thought I needed to step up. I've gained a lot of confidence by playing more basketball. It's just a matter of taking and hitting the open shots."

Ottumwa was able to win the turnover battle in the second half, taking the ball away from the Panthers multiple times creating multiple opportunities to continue cutting into Knoxville's lead. After a season in which shots were hard to come by at times against teams with plenty of upperclassmen, Ottumwa at times rushed quality looks at the basket throughout Thursday's scrimmage that might have made the contest even closer.

"We got caught at times where someone would get the ball and look to shoot it right away instead of looking for other options," said Rylea Hinebaugh, who scored five points in her return to the basketball hardwood after an injury-shortened freshman campaign. "I think we just need to make sure to keep our eyes up and focus on seeing everything before you make your next move."

Last year, those were lessons the young Bulldogs had to learn on the fly. This year, having absorbed those lessons, Ottumwa is eager to continue their growth together starting by avenging last year's rough 42-30 season-opening loss at Fort Madison in a game where the Bulldogs committed 37 turnovers against the physical Bloodhounds.

"We know that Fort Madison lost their leading scorer (Malarie Ross) who had 500 points last season," Hinebaugh said. "We did better than we thought we'd do on Thursday. It's just a matter of calming down and making the right decisions. I think we can get ourselves over the hump a little quicker this season."