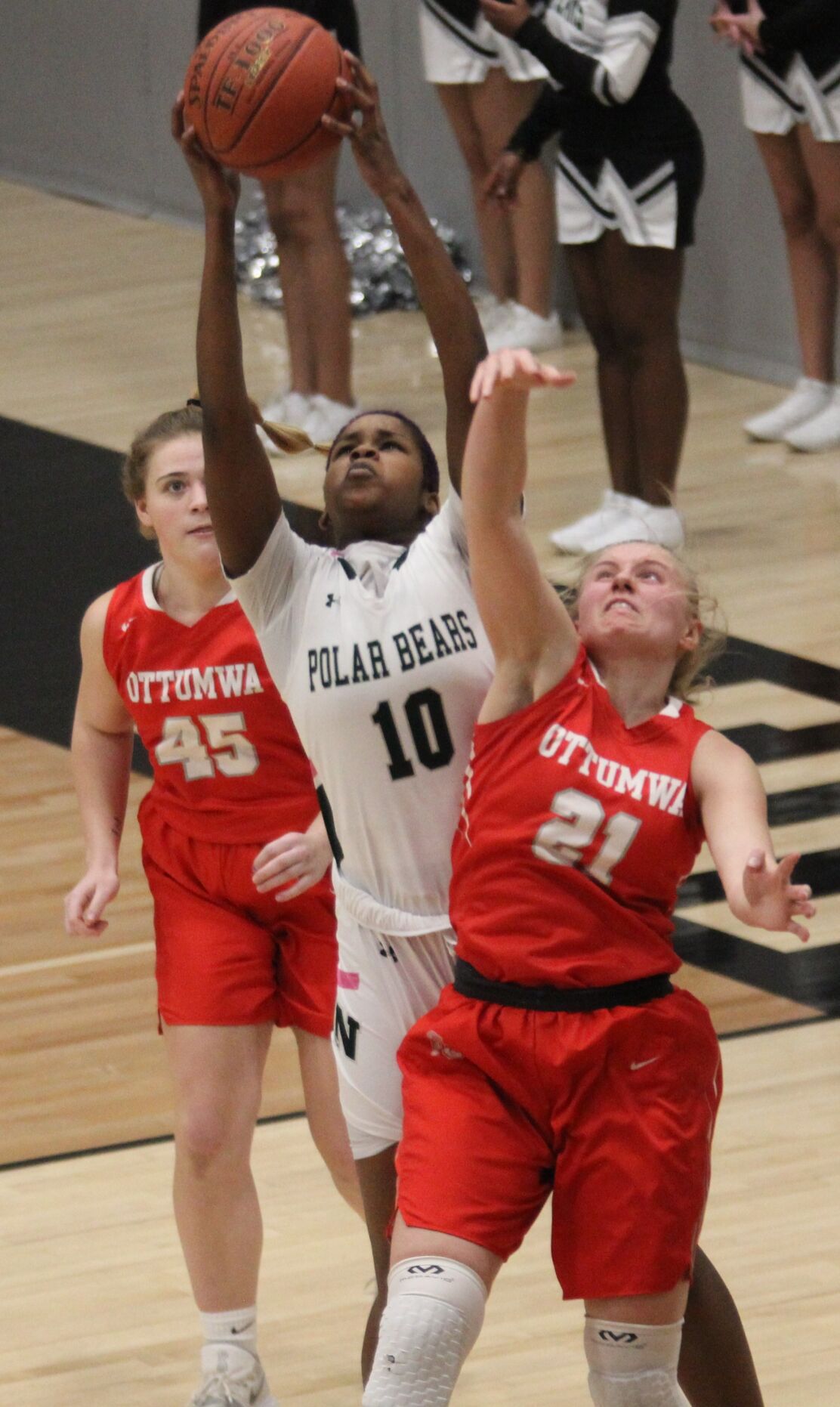 Des Moines North senior Ihari Oromo (10) reaches out to catch a pass in the paint while being defended by Ottumwa teammates Addison Ransom (21) and Josie Lemonds (45) on Wednesday night during a Class 5A girls basketball regional quarterfinal at Des Moines North High School. 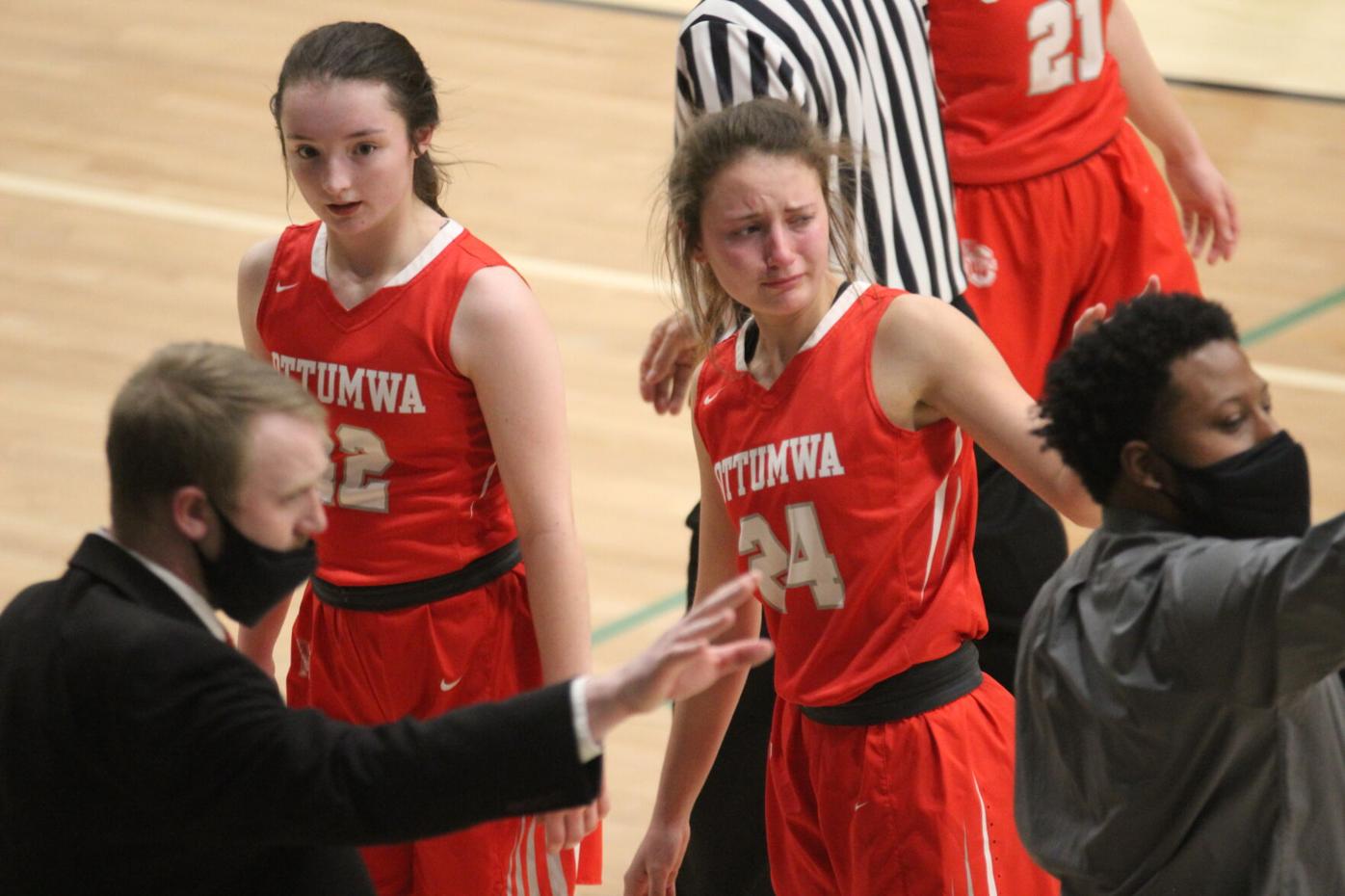 Chloe Schneckloth (24) wipes away tears while walking off the court with senior teammate Zoey Jones as time winds down on a Class 5A regional first round loss for the Ottumwa girls basketball team at Des Moines North.

Des Moines North senior Ihari Oromo (10) reaches out to catch a pass in the paint while being defended by Ottumwa teammates Addison Ransom (21) and Josie Lemonds (45) on Wednesday night during a Class 5A girls basketball regional quarterfinal at Des Moines North High School.

Chloe Schneckloth (24) wipes away tears while walking off the court with senior teammate Zoey Jones as time winds down on a Class 5A regional first round loss for the Ottumwa girls basketball team at Des Moines North.

She wasn't about to watch the another battle between the Polar Bears and the Bulldogs from the sidelines.

The Ottumwa senior may not have been able to prevent the 2020-21 OHS girls basketball season from coming to a close in the final minutes of the Class 5A regional quarterfinal. Des Moines North had already stretched out a late lead to 47-29, all but securing a trip to the regional semifinals.

The game was in hand and the advice to Schneckloth from the trainers on hand was to not try to return to the court after exiting late in the third quarter with an injured knee.

In her final high school basketball game, Schneckloth finished the season on the floor, a goal of every team that has started a season over the past year in the middle of the COVID-19 pandemic. Time ran out on the Bulldogs as North secured a 47-31 win, the third victory of the year over Ottumwa, with Schneckloth having checked back into the game.

"When she first came back out of the locker room, I asked her what the trainers had said. She said they told her she was done, but that she wanted to get back out there on the court," Ottumwa head girls basketball coach Joe VandenBerg said. "How do you tell a senior she can't go out for the final 30 seconds of her career? We might have went against the wishes of the trainers, but if she wants to go back out there and finish career on the court just like she started it, I'm okay with that."

It was the final hurdle overcome by the Ottumwa girls to finish the season on the floor COVID exposure caused a pair of two-week delays. Schneckloth missed nearly three weeks of her senior basketball season in quarantine, including the second loss of the season to North which snapped a five-game winning streak for the Bulldogs preventing Ottumwa from evening their overall record for the first time.

"I was lucky enough to have a season. I got taken out three times with COVID, but I got to be out on that court, which is something I'll always be thankful for," Schneckloth said.

Schneckloth was part of a hot start for the Bulldogs in their postseason opener. Ottumwa forced six North turnovers in the first four minutes and jumped out to an 8-0 lead with Schneckloth getting the fourth field goal driving in for a breakaway lay-up off a steal by Olivia Coram.

"It was a great start for us. There was a lot of energy. Our effort and our enthusiasm was really good," VandenBerg said. "I thought we might be able to run.

"Unfortunately, we just hit a little bit of a wall."

North (10-5) struck from the outside to get back in the game as Elizabeth Puot and Jaylia Benson each sank deep jumpers, cutting the Ottumwa lead to 8-6. Schneckloth kept the Bulldogs in front, stopping a potential tying lay-up by Beeson before grabbing the rebound and driving to the other end of the court for her second lay-up of the opening quarter, giving Ottumwa a 10-6 lead.

The Bulldogs regained a six-point lead twice early in the second quarter. Schneckloth found Zoey Jones for a baseline jumper before Josie Lemonds drove in for two more points to give Ottumwa a 14-8 lead. The Bulldogs, however, wouldn't score again as North put the final eight points of the first half on the scoreboard taking the lead for good on a go-ahead putback by Puot with 85 seconds left in the second quarter.

Ottumwa stayed within striking distance early in the second half, answering a Beeson 3-pointer to open the third quarter with a drive for two points by Addison Ransom to pull within 19-16. Then came a pivotal play as Jones nearly had a clean steal near mid-court with Coram dashing back looking for a pass that could have led to a lay-up and, with a foul, potentially a game-tying 3-point play.

Jones, however, couldn't quite come up cleanly with the steal, leaving her pass ahead of Coram well short allowing Nya Mach to recover the ball. Mach then found team scoring leader Laphina Campbell, who was hampered with her own ankle injury, leading to a 3-point play for the Polar Bears that doubled the North lead.

"That happened a couple of times. There were 50-50 balls that we either had and couldn't hang on to or got tipped away from us," VandenBerg said. "North probably got 90 percent of those 50-50 balls."

Isabelle Mellin and Lemonds both sank 3-pointers late in the third quarter moments after Schneckloth initially went out, cutting a 12-point North lead down to 30-22. Ottumwa and North split the first 12 points of the fourth, keeping the Bulldogs down but not out, a fact that got Schneckloth back to her feet in the locker room.

"I asked my mom to check on the score. She told me we were still trailing by eight," Schneckloth said. "I got off that trainer's table. I started to do high knees. I was determined to get back on the court."

Ultimately, North would put the game out of reach before Schneckloth could even return to the Ottumwa bench. Campbell capped a 12-point night with two more lay-ups, including another 3-point play, as the Polar Bears put the game away with a late 11-1 run.

Puot led North with a double-double, scoring a game-high 13 points while grabbing a game-high 11 rebounds. Ransom led Ottumwa with nine points as the Bulldogs, once 0-6 on the season, finished a unique and sometimes difficult season at 6-9 with six wins in the last nine games.

"We didn't return any starters last year. I think Chloe led the team in returning minutes from the previous year averaging eight to nine minutes as a junior," VandenBerg said. "That took us some time to get our feet wet this season. Next season, we return Addison and Olivia who have started almost every game this year for us. To have those two to build on with their experience and the knowledge of what to do that they can pass on to other players will be good. We can build on that and move forward."