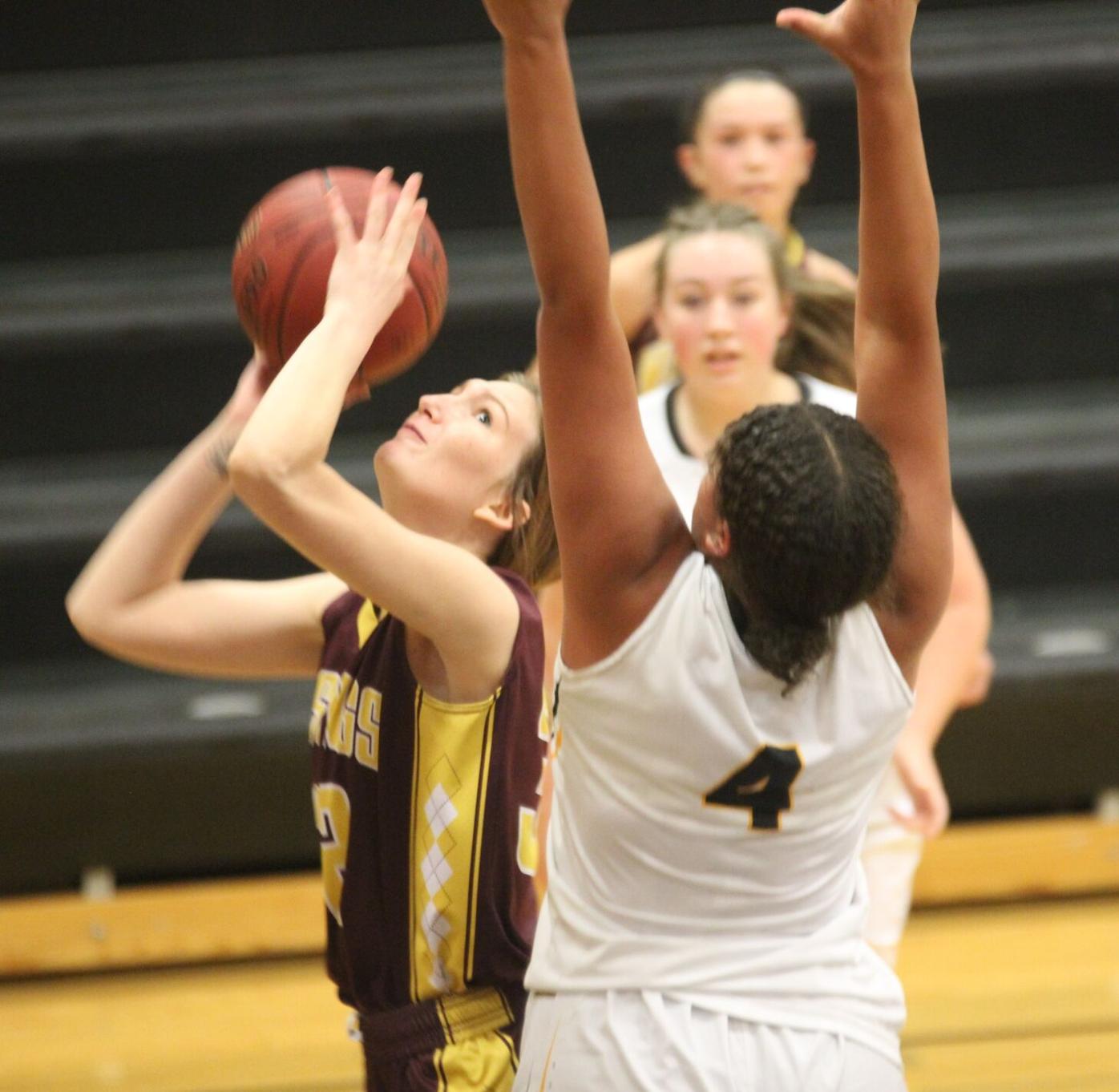 Davis County junior Brett Barker looks up at the basket looking for a shot while being defended by New London sophomore Keaura Williams (4) during high school girls basketball action at the Charles Loeber Gymnasium in New London on Saturday. 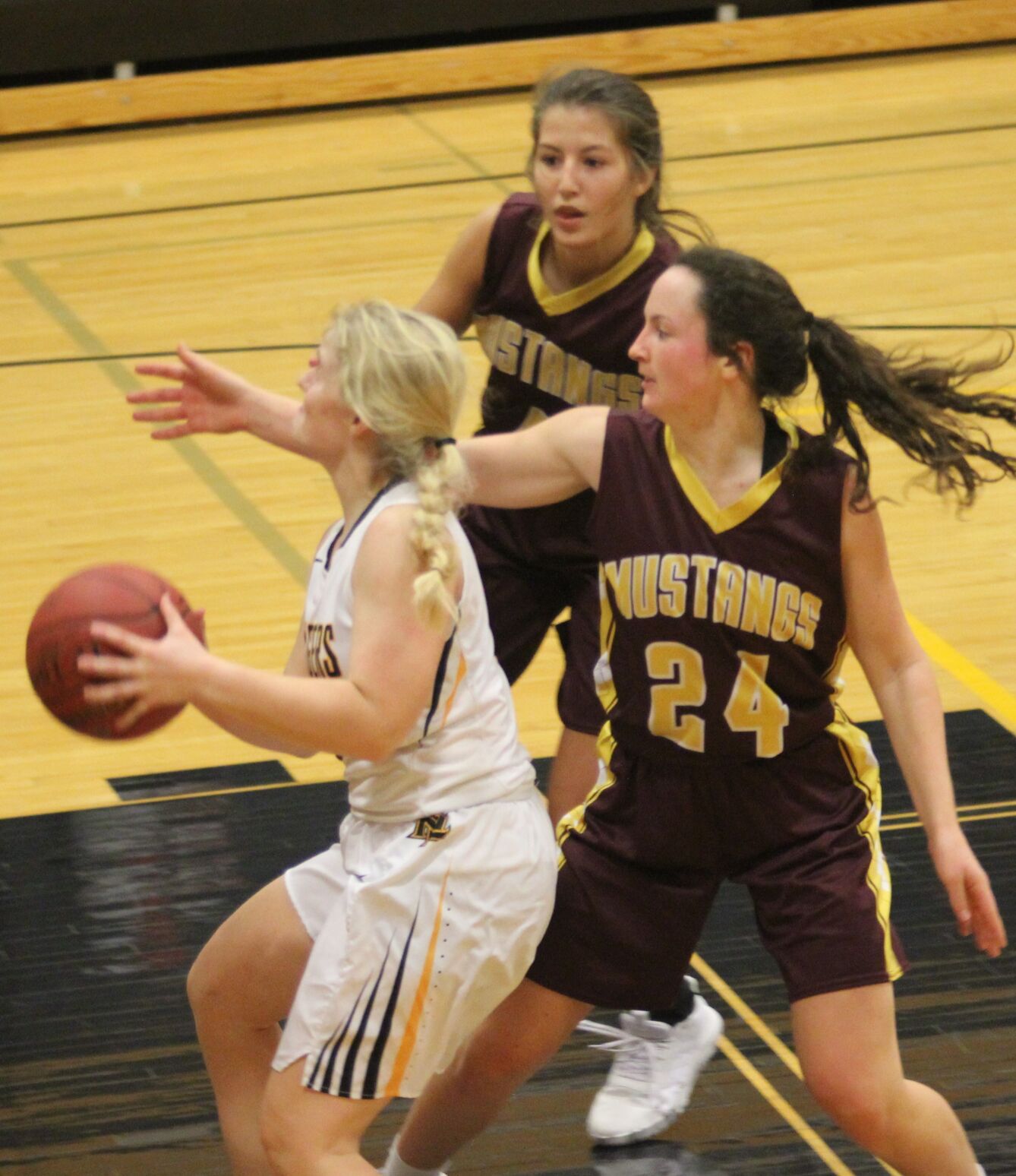 Davis County junior Brett Barker looks up at the basket looking for a shot while being defended by New London sophomore Keaura Williams (4) during high school girls basketball action at the Charles Loeber Gymnasium in New London on Saturday.

NEW LONDON — Keaura Williams is on the board.

So are the New London Tigers in the 2020-21 high school girls basketball season.

Williams recorded the second-most rebounds in a single game ever by a New London girls basketball player, racking up 24 rebounds to highlight a dominant night in the post on Saturday at Charles Loeber Gymnasium. That dominance helped stymie Davis County, making dropped a 44-26 season debut spoiling the return to the sidelines of former Mustang head boys basketball head coach Jeff Graves in his debut as head coach of the Mustang girls.

"I told the girls before we went out that we were not going to be able to get any energy of the crowd. That's just the COVID-19 (situation) we're in," Graves said. "We had to create our own energy. We just did not create any energy. I don't know if we had nervous girls. I don't know. If you would have come to any of our 11 practices, that is not a problem.

"We usually have to reign them back in because of their aggressiveness. We just did not have any of that."

While the Mustangs struggled to find a spark, New London got one early on from the perimeter as Marah Hartrick kicked off an 18-point night for the Tigers with a pair of 3-pointers, helping New London open a quick 8-2 lead.

The interior, however, is where Williams stood out on both ends of the floor. The Tiger sophomore had 10 rebounds in the first quarter alone and 17 rebounds by halftime, putting her well on pace to break the school record set by Morgan Christner in the 2014-15 season of 28 rebounds in a single game.

Ultimately, Williams collected just seven more boards in the second half finishing a dominant double-double that included 12 points and six blocks. The 24 rebounds represents the second-most in a single game by a New London player, an honor that will put Williams on the school's board for individual and season records for all sports in the hallway just outside Loeber Gym.

"That's going to be amazing. It's going to be a good feeling whenever I can walk by that board and see my name on there," Williams said. "We came out as a team and played with lots of energy. It's tough to do that sometimes with just seven girls on the team. We played as a team and communicated well."

The Mustangs finally made a move in the second quarter after scoring just four points in the opening eight minutes. Sophia Young found Morgan Petefish on an inbounds pass for a lay-up to open the scoring in the second quarter, then collected a steal that lead to a fastbreak lay-up as Davis County used an 8-2 run to get within 14-12 of the Tigers.

"We've always been taught to push the ball. Coach Graves really emphasizes it," Petefish said after leading Davis County on Saturday with 10 points. "He knows we're going to be in better shape than a lot of teams we play because of how much we run and condition. Our fast break is going to be important to us."

Ultimately, the Mustangs might have been too quick on the draw from the field to put New London's lack of depth to the test on Saturday. With Williams proving to be a problem inside, Davis County rushed several shots leading to an 11-60 shooting performance in the season opener with many shots inside by the Mustangs missing as players rushed to get the ball to basket before the Tiger defense could get their hands in the path of the shooters.

"We rushed everything. The first shot that was even somewhat open, we just took no matter what," Petefish said. "Sometimes reversing the ball is a better option in those situations. You just never know. We just wanted to take the first shot that we got, which was not the right thing to do."

Hartrick sank a third shot from 3-point territory before finding Ashlyn McSorley for a lay-up in the final minute of the first half, sending New London to the locker room with a 21-13 lead. It was a struggle to shoot the ball from all points for the Mustangs, who were just 4-16 from the free throw line including eight misses in the first half that kept Davis County from catching up to the thinner Tigers.

Any hopes of wearing down New London down the stretch ended as the Tigers (1-1) scored the first eight points of the fourth quarter, building a 42-21 lead. The Mustangs went over seven minutes without a point in the second half a lay-up by Sydney Henderson kicked off a 5-2 finish for the Mustangs (0-1) in the final minute.

"There are no excuses. We didn't bring any energy and didn't come with the effort needed to win a basketball game," Graves said after his first game as a head coach on the varsity high school level in five years. "I've coaches a lot of these girls in junior high. I know how (former Davis County head girls basketball coach) Dave Mason coaches. These are not new concepts for us."

Davis County will look to even their record heading into the Thanksgiving weekend break on Tuesday. The Mustangs head to central Iowa to face Grand View Christian at Faith Baptist Bible College in Ankeny.