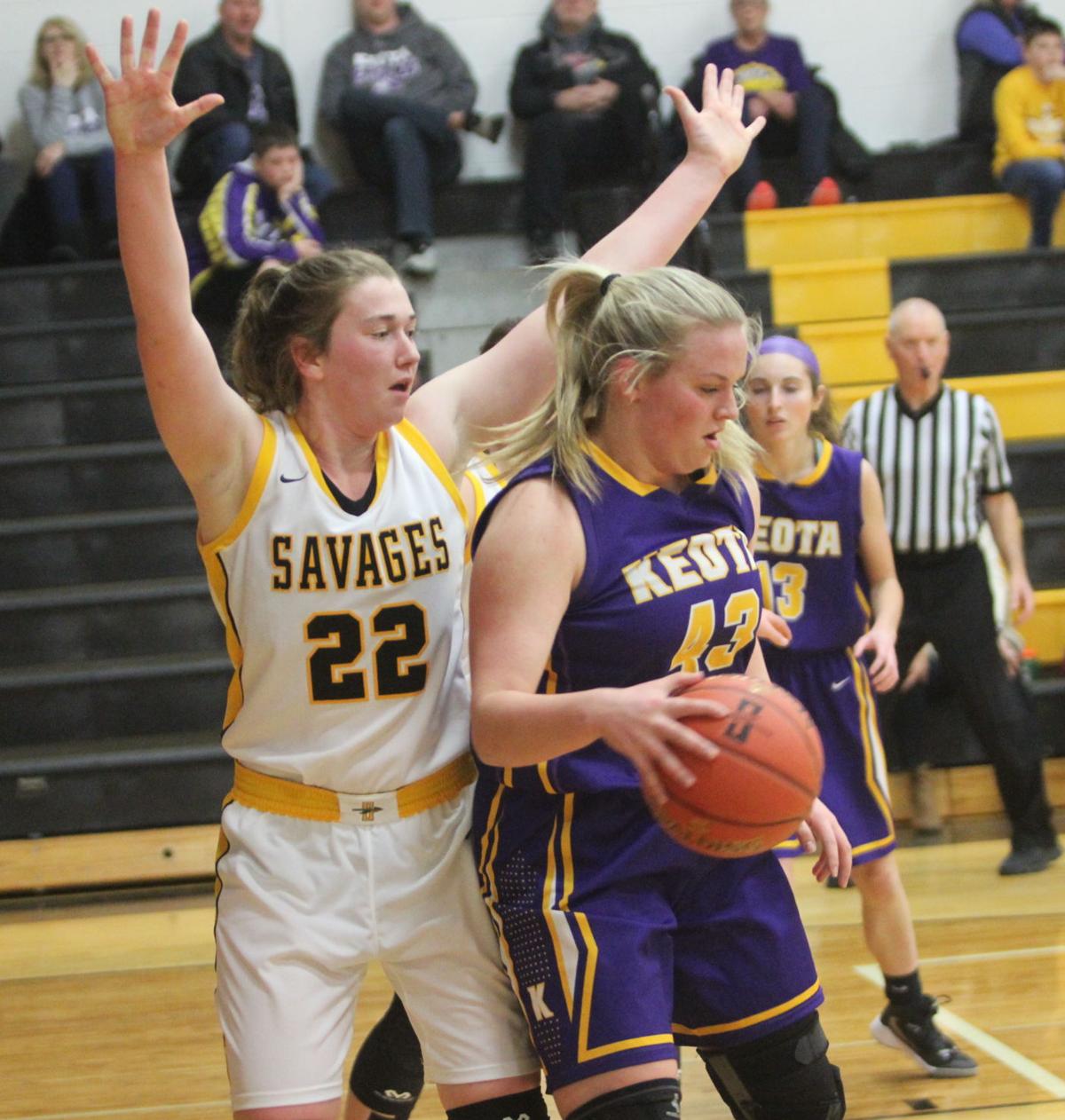 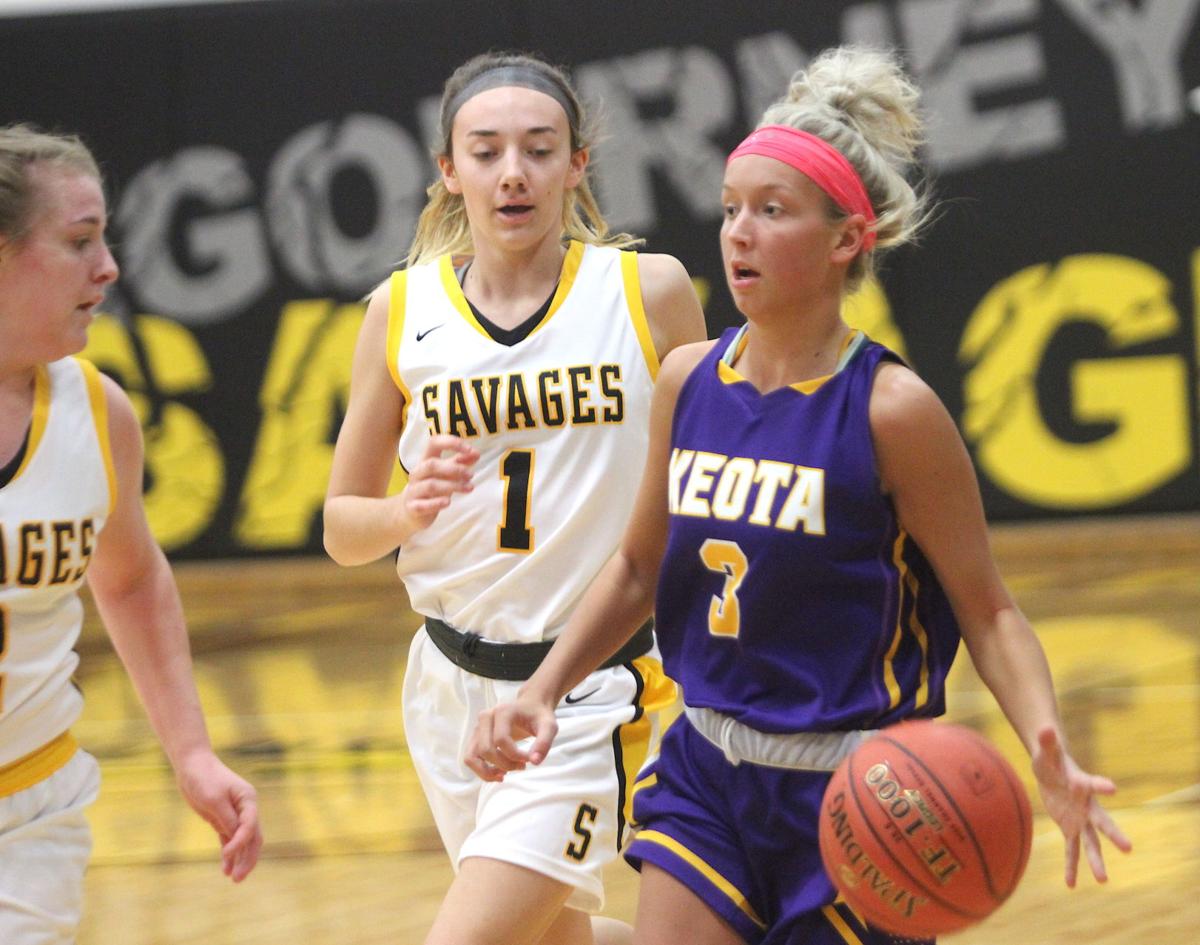 Keota junior Bailey Sieren (3) dribbles the ball up the court as Sigourney teammates Reagan Roozenboom (1) and Madelynn Hornback look to trap defensively on Thursday night during opening round action in the Class 1A girls basketball regional tournament at Sigourney High School Gymnasium.

Keota junior Bailey Sieren (3) dribbles the ball up the court as Sigourney teammates Reagan Roozenboom (1) and Madelynn Hornback look to trap defensively on Thursday night during opening round action in the Class 1A girls basketball regional tournament at Sigourney High School Gymnasium.

For Megan Stuhr and the Sigourney Savages, there was little drama about whether or not that journey in Class 1A would continue into next week.

Stuhr scored 29 of her game-high 32 points in the first half, adding seven rebounds, five assists, five steals and three blocks to an overall complete night on the floor. All that production came in the first three quarters as Stuhr watched the fourth quarter of Sigourney’s 64-11 regional opening-round win over Keota from the bench.

After coming up short of making it to state in two of the past three seasons, Stuhr and the Savages up that 2020 is finally the year for the Keokuk County school to venture northwest to Wells Fargo Arena in Des Moines.

Sigourney (17-4) did not figure to get much resistance on Thursday from Keota, who finishes a tough 2019-20 season with a 2-18 record. The Savages had won the South Iowa Cedar League home-and-home regular-season series easily with a 47-6 win at Sigourney on Dec. 17 and a 72-11 win in Keota just six days earlier.

For the fourth time in nine quarters, Sigourney held the Eagles without a point leading 26-0 heading into the second quarter on Thursday. While Stuhr scored 14 points in the first quarter, the Savages forced Keota into 13 turnovers and allowed just five shot attempts.

“I knew they (Keota) did not handle pressure well, so we figured we’d come out and try to end it as quickly as possible,” Sigourney head girls basketball coach Zach Tremmel said. “We applied a lot of pressure. We told Megan she needed to attack, attack, attack. She came out and set the tone. The team defense kind of put it away early.

“There’s nothing better than tournament basketball. The more you win, the bigger the games get and bigger the crowds get. We’ve just got to take it one game at a time.”

Stuhr was the only player to reach double figures in scoring. Keota wouldn’t score at all for the first 11 minutes before Taylor Kindred finally drew a shooting foul and sank the second free throw with just over four minutes left in the first half against Sigourney had opened a 33-0 lead.

Bailey Sieren had Keota’s first field goal three minutes later, sinking a jumper that pulled the Eagles within 47-6. Sieren hit two of Keota’s three field goals in the game with Sky Weber hitting the other field goal to finish with a team-leading seven points.

“We play hard no matter who we’re playing, whether it’s Keota for the third time or someone else for the first time,” Stuhr said. “We keep the same intensity up and come out to win.”

After twice winning five straight games during the season, Thursday’s victory gave Sigourney a season-best six-game winning streak and another postseason game at home with a SICL rival. English Valleys improved to 13-8 with a 49-23 over Tri-County and figure to be a much stiffer test for the Savages having nearly pulled off an upset at Sigourney earlier this season, falling 43-39 back on Jan. 28.

“Getting two games always helps when you start out the postseason, but English Valleys gave us fits last time we played them,” Tremmel said. “They led most of that game here with us. That’s as far ahead as we’ve looked.”

Should Sigourney advance, the road to state would include a trip to Iowa City High on Feb. 21, which could feature a match-up with 10th-ranked Springville in the regional semifinals. If the Savages get back to the regional finals, fifth-ranked SICL rival Montezuma could be waiting in the wings on Feb. 26 in either Williamsburg or at Iowa City West.

“Springville is a 1A powerhouse with another solid team and we know what Montezuma has having faced them already this year (a 67-35 road loss back on Dec. 19),” Tremmel said. “In the last couple of weeks, we’ve gotten it going. Hopefully, we’re playing as good as we can.

“We’re pretty confident playing as a team,” Stuhr added. “It feels pretty good to be back out playing the postseason again.”