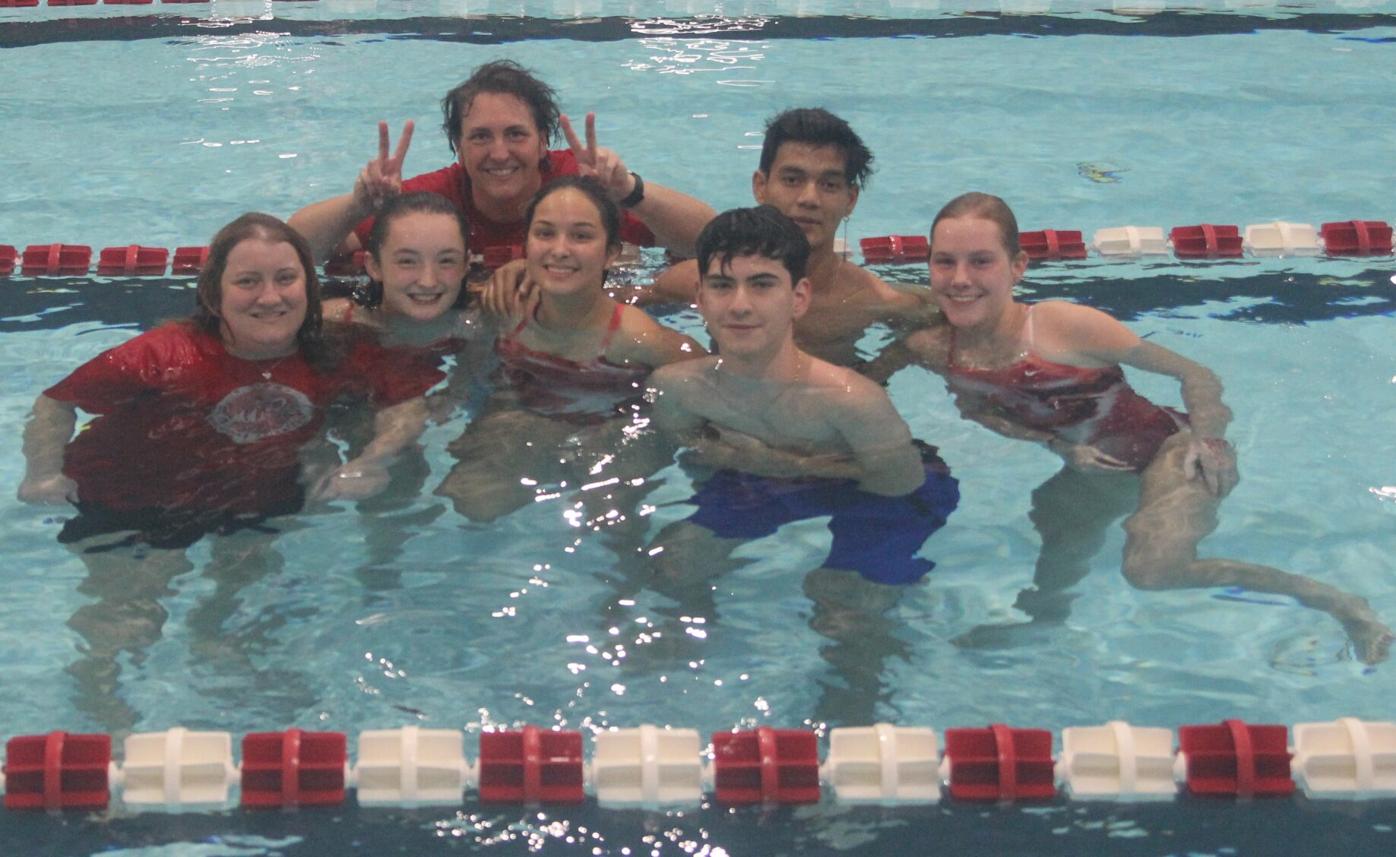 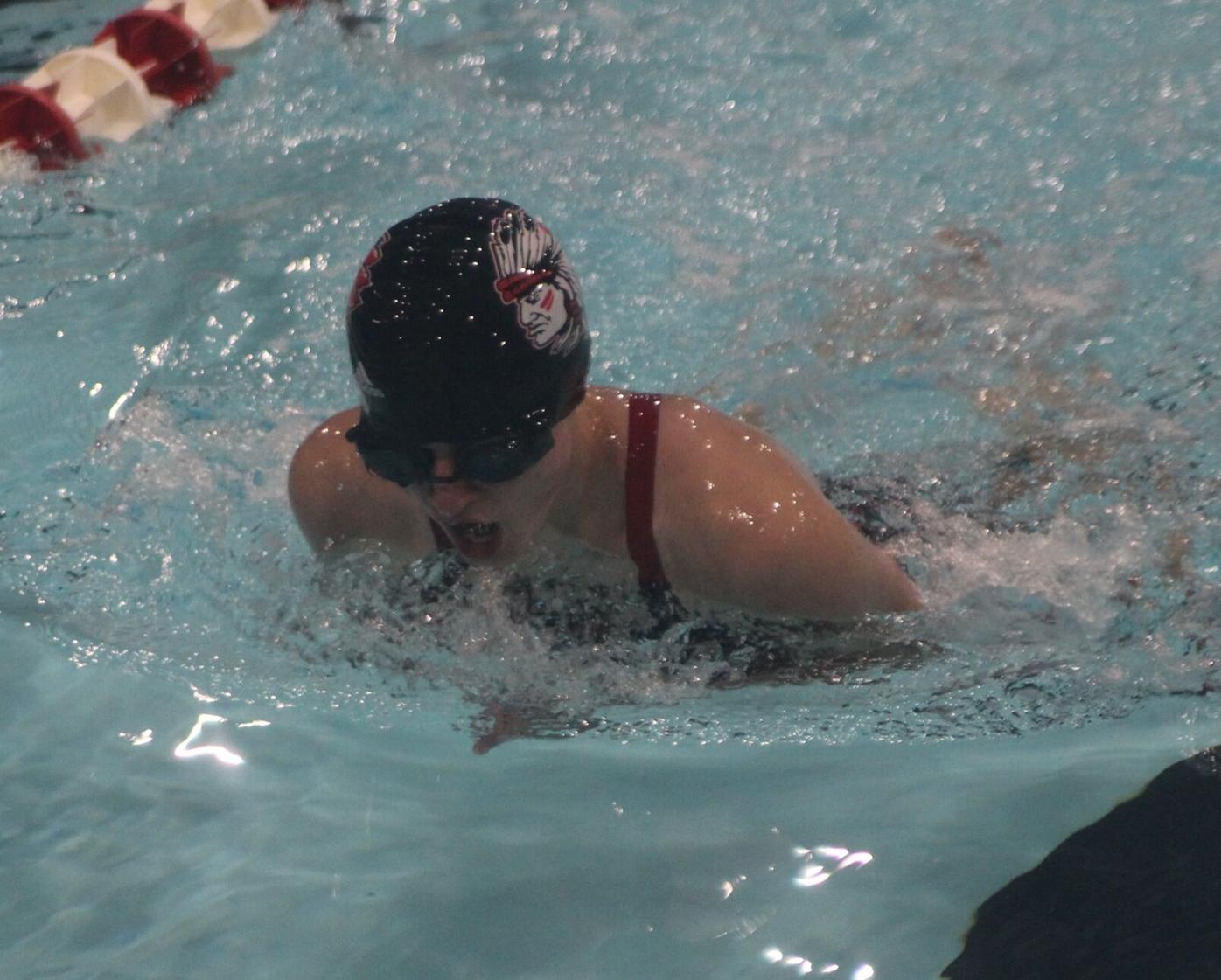 Centerville senior Abigail White heads down the pool during the 100-yard breaststroke on Thursday at Mike McWilliams Pool in Ottumwa.

Centerville senior Abigail White heads down the pool during the 100-yard breaststroke on Thursday at Mike McWilliams Pool in Ottumwa.

OTTUMWA — Nancy Vass, Zoey Jones and Leticia Sosa were hoping to have a special guest star arrive at Mike McWilliams Pool on Thursday to join them in one final 200-yard freestyle relay.

The only three Ottumwa High School seniors on the girls swimming team left the fourth spot open intentionally during a triangular dual against Keokuk and Centerville. The hope was their former coach, Cherie Langland, would be able to join them for one last swim.

"The plan was her to swim the anchor leg of the relay. Unfortunately, she wasn't able to make it," current Ottumwa High School head girls swimming coach Heather Simplot said. "Fortunately, we had one of the members of the boys team, Nathan Calhoun, that was able to fill in."

Unofficially, Calhoun swam a 24-second anchor leg which would have placed the seniors in second place behind teammates Libby Moses, Drennan Lindberg, Ava Johnson and Mac Payne. Of course, neither Langland nor Calhoun were legal participants, meaning the team's finish was not able to be counted.

Not that it really mattered in the end as Ottumwa easily outpointed Keokuk (110-42) and Centerville (123-13). It also didn't matter to the Ottumwa seniors, who enjoyed one last swim together.

"It was a great night experiencing everything with the team one more time," Jones said. "Everything the team set up for us was nice. It brought a few tears to my eyes. It brought back a lot of great memories."

Sosa, Jones and Vass joined Amber Shotts in a second-place swim to open the night in the 200-yard medley relay. The senior (and one junior) team finished the race in 2:28.37. Chelgren, Libby Moses, Payne and Johnson won the opening race in 2:04.48.

Vass added a third-place swim in the 50-yard freestyle in 31.02 seconds. Sosa then placed third in the 500-yard freestyle, finishing the same race Jones credited her favorite swimming memory from in 7:52.26.

"I didn't want Leticia to beat me, so I bowed out this time," Jones joked. "Maybe if all three of us could have swam in the race, I might have gone for it."

Vass shot that idea down.

Jones came back to finish third in the 100-yard breaststroke, adding another unique memory while posting a time of 1:37.61.

"My goggles actually came off during the race," Jones said. "The swimming part wasn't so bad because you come up out of the water so much during the race. The adrenaline once they came off was tough to contain. I really started sprinting so, by the time the race was over, I was pretty much dead."

"I love seeing the program and see how much it's been growing since we've been part of the program," Vass said. "We did lose a lot of seniors last year, but we've got so many great swimmers coming up like Ava. I think they're all going to do great things for many years to come."

The same can be said of the Centerville swimming program, which had three seniors honored on Thursday as part of the festivities. After being honored with Antonia Goodwin and Mariah Rupalo, Abigail White posted runner-up finishes for the Redettes in the 50-yard freestyle (28.02) and the 100-yard breaststroke (1:32.91). Ottumwa's Libby Moses picked up the breaststroke win over White and Jones in 1:18.54.

"We don't have any home meets, so for Ottumwa to honor our seniors at this meet was pretty special for our girls," Centerville head girls swimming coach Amber White, Abagail's mother, said. "We feel really close to Ottumwa's program. They welcomed us in last year during the boys season and welcomed in for a pair of meets this year. We've got over 50 swimmers in our YMCA program, so the program definitely has a bright future ahead."

Ottumwa, now 5-2 in duals, has added a trip to Johnston for an invitational meet on Saturday, Oct. 10. The Bulldogs also will make their first trip to Fairfield to swim against Oskaloosa and the Trojans on Oct. 26.