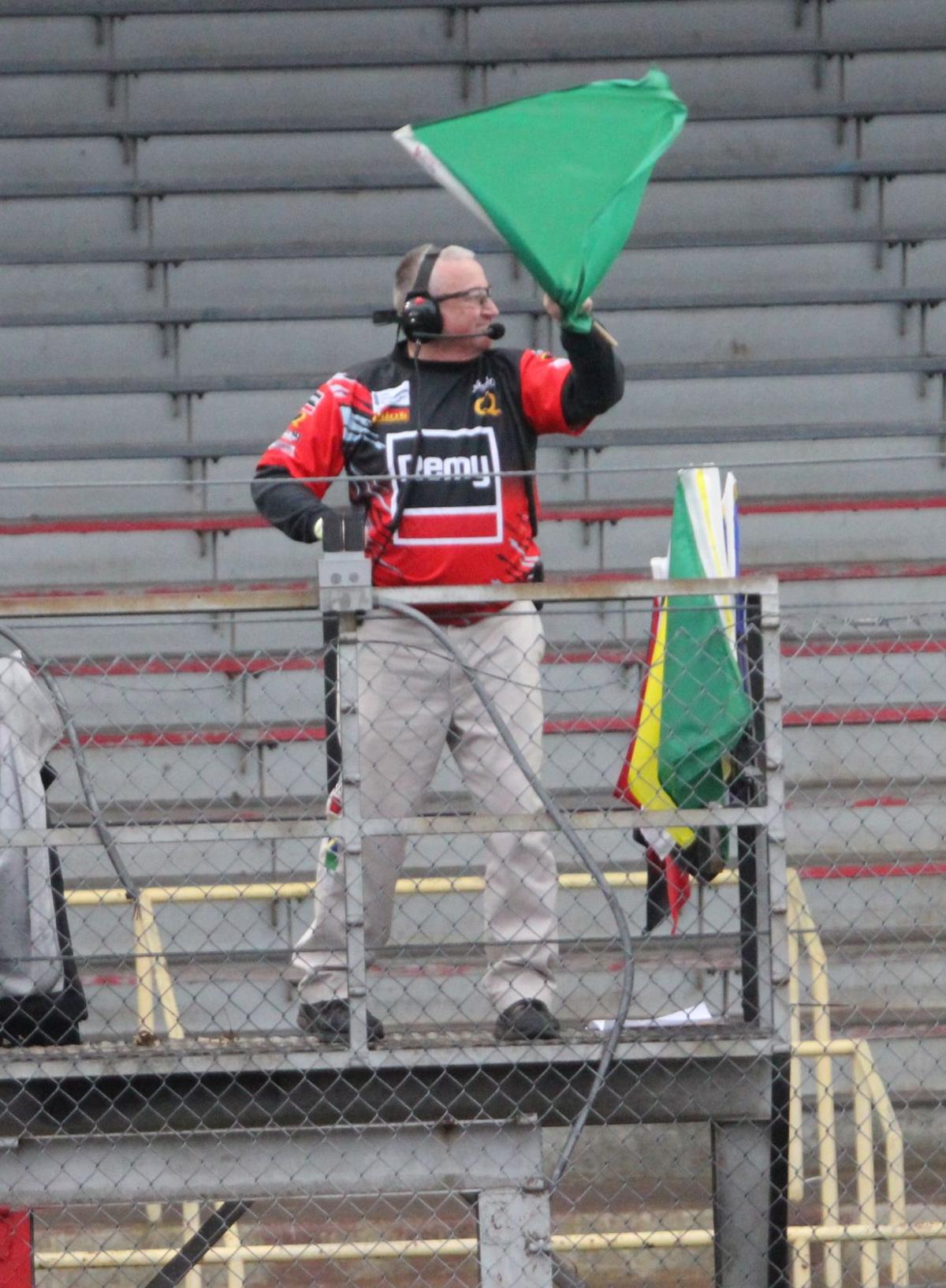 Even with empty grandstands due to the coronavirus pandemic, the green flag dropped on the racing season at the Southern Iowa Speedway in Oskaloosa on Wednesday night. 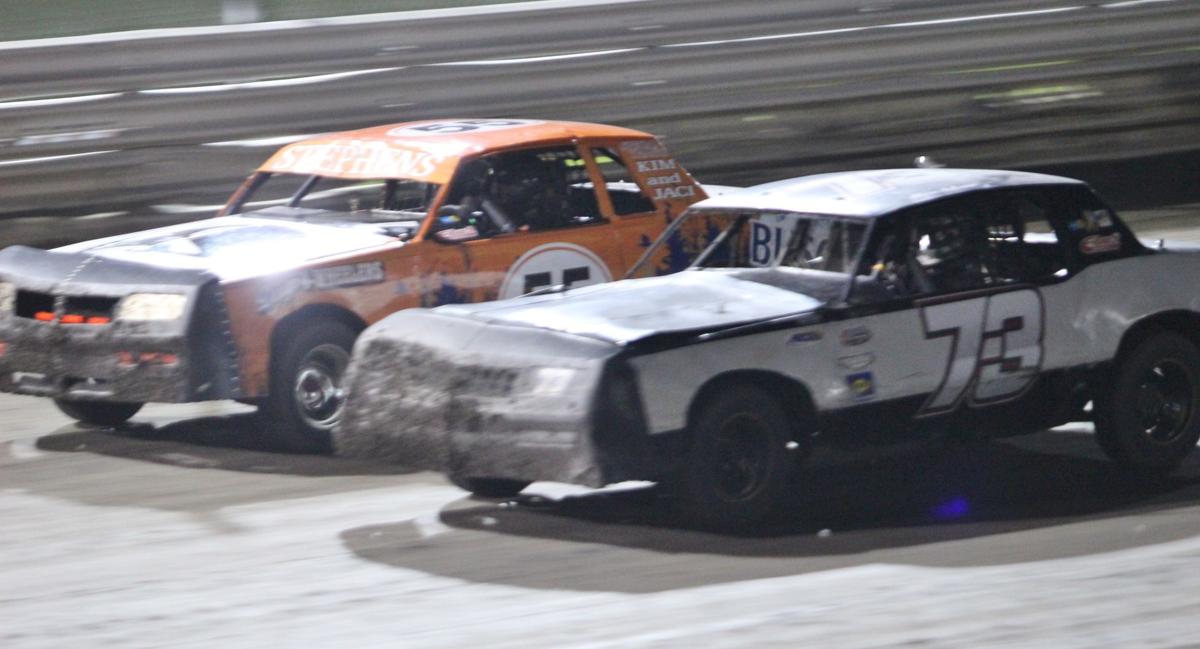 Bussey native Brad Stephens (55) battles it out door-to-door with Delta native Aaron Martin (73) on Wednesday night during the IMCA Hobby Stock feature race at the Southern Iowa Speedway in Oskaloosa. Stephens recovered from a spin out and a flat tire on the opening lap, rallying from 15th place to win the fourth of the five main races held on the opening night of racing at SIS.

Even with empty grandstands due to the coronavirus pandemic, the green flag dropped on the racing season at the Southern Iowa Speedway in Oskaloosa on Wednesday night.

Bussey native Brad Stephens (55) battles it out door-to-door with Delta native Aaron Martin (73) on Wednesday night during the IMCA Hobby Stock feature race at the Southern Iowa Speedway in Oskaloosa. Stephens recovered from a spin out and a flat tire on the opening lap, rallying from 15th place to win the fourth of the five main races held on the opening night of racing at SIS.

OSKALOOSA — On perhaps the most unique season opener in the history of the Southern Iowa Speedway, Brad Stephens took a unique route to victory lane.

The Bussey native opened the 14-lap IMCA Hobby Stock feature race stuck in the mud dealing with a flat tire before the first lap had even been completed. Stephens eventually made it back to his pit and was ready to call it a night.

His pit crew had other ideas

“We were just going to quit, but a bunch of guys were yelling at us saying ‘no we’re not. We’re going to change it,’” Stephens said. “Chris Walker, a friend of mine that helps with the track, told me they’d let me change the tire if I wanted to.

“God bless them. They let me go back out. I had to start from the back. I’ve never come from the back to win like that. That’s a first.”

Stephens drove past 14 cars in less than 14 laps, passing the final five cars in less than five laps to win the fourth of five main races on an exciting night of local racing at the Southern Iowa Fairgrounds. Stephens took the lead for good passing heat winner Nathan Ballard before holding on for the win over the final two laps.

“I just stuck the car down low and drove over the bumps,” Stephens said. “That car was like a rocket. Every lap, I’d pass a car or two. When the caution came out with seven laps to go, I looked up and I was in fifth. That’s when I thought to myself that I might be able to do this.”

On a normal night, the comeback might have drawn a standing ovation from the fans in the stands at SIS. The coronavirus pandemic, however, made for unusual surroundings on the first night of racing at the Oskaloosa track as the stands remained empty with fans not allowed to attend.

“It’s obviously very strange with no one up in the grandstands. It’s very weird to be a part of this,” track announcer Jerry Mackey said. “Hopefully, this is a one-time deal and we’ll be able to get fans in the stands next week.”

Nathan Wood, a familiar face at the Southern Iowa Speedway, brought home the final win of the night leading nearly every lap of the IMCA Stock Car feature. Wood took advantage of the top starting position by virtue of the re-draw after winning leading his heat race start to finish, leading the caution-free main race flag-to-flag easily outdistancing Corey Strothman for the opening-night victory.

Wood, a Sigourney native, is the superintendent of schools at Montezuma. Hours before taking the track at Oskaloosa, Wood was one of many administrators across the state to receive the news that high schools have been given the green light across Iowa to pursue prep baseball and softball seasons starting June 1.

“If the race hadn’t been at Oskaloosa, I probably would have stayed home,” Wood said. “A lot of my sponsors are from the Oskaloosa area. We wanted to put on a show and support the track.”

While the grandstands remained empty, the infield at Southern Iowa Speedway filled up quickly with 71 drivers from three different states registering for the season-opening night of racing. Jeffrey Delonjay was the only winner from outside Iowa on Wednesday as the native of Quincy, Illinois, leading the the IMCA Sport Compact 10-lap feature flag-to-flag beating out a 20-car field that included younger brother Jaden who placed fourth.

Knoxville native Jonathan Hughes secured the first of the three flag-to-flag feature race wins taking advantage of a front-row start to win the non-wing sprint car feature. Hughes maintained a comfortable lead on the track, easily crossing the finish line ahead of Ottumwa native Doug Sylvester while battling the wet track conditions and heavy mist that fell through the caution-free 10-lap run.

“The track was just scary with all the ruts. There’s been a lot of rain. It was so soft and ruts were just so treacherous,” Hughes said. “If you didn’t have the car set up right, it would just bounce all over.

“I had a couple cars in lap traffic that I needed to get around in the closing laps. I figured Sylvester would be breathing down my throat, so I thought it might get a little scary. I knew we were better than what we showed in the heat race. We got things figured out and went like mad out there in the feature.”

The 16-lap Sport Modified main event saw several more twists and turns with several drivers contending for the win. Curtis Vanderwal and Logan Anderson both went from owning the lead during the final to being sidelined with mechanical woes.

In the end, Fort Dodge native Jason Bass took advantage of a second caution flag, closing the gap between himself and the front two cars to rally for the lead with three laps left. In his Oskaloosa debut, Bass had to hold off Blaine Webster, the 18-year-old defending track champion at SIS who nearly pulled off a season-opening win just days before joining his fellow seniors as part of the graduation ceremonies at Ottumwa High School this weekend.

“Usually I don’t like seeing that yellow flag when you’re up front. I liked seeing it there. I needed it to have any chance of winning,” Bass said. “It’s smoother on the top side, even though it is the longer way around the track. I saw (Webster) down on the bottom, so I cut down there over the final two laps. He’s a good racer, that’s for sure.”

Racing action at the Southern Iowa Speedway will continue next Wednesday night. Hot laps are set to take the green flag at 7:15 p.m. Racing will follow.