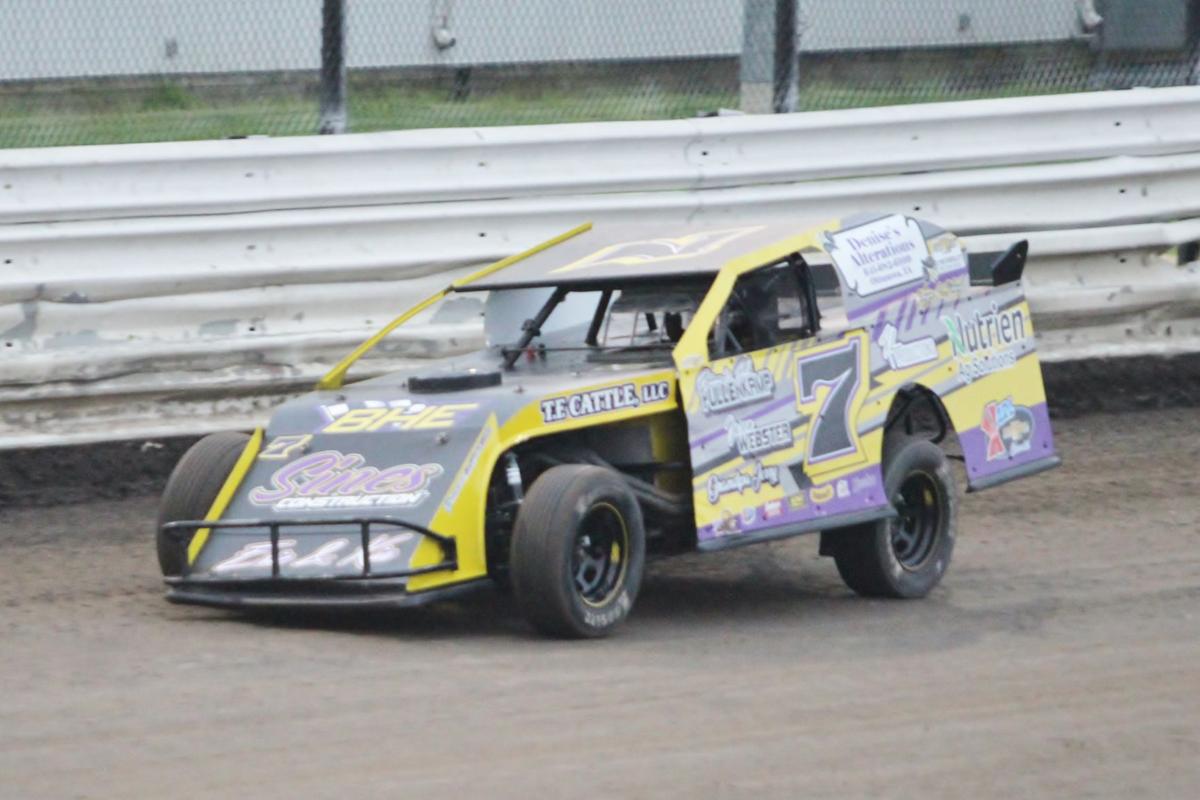 Ottumwa native Blaine Webster turns hot laps at the Southern Iowa Speedway in Oskaloosa last Wednesday prior to beginning defense of his track championship. The 18-year-old Ottumwa High School senior won season titles at both SIS and at the Eldon Raceway last season.

Four days before receiving his diploma from Ottumwa High School, 18-year-old Blaine Webster puts the hood back on his car following post race inspections at Southern Iowa Speedway after finishing second in the IMCA Sport Modified main race in Oskaloosa.

Ottumwa native Blaine Webster turns hot laps at the Southern Iowa Speedway in Oskaloosa last Wednesday prior to beginning defense of his track championship. The 18-year-old Ottumwa High School senior won season titles at both SIS and at the Eldon Raceway last season.

Four days before receiving his diploma from Ottumwa High School, 18-year-old Blaine Webster puts the hood back on his car following post race inspections at Southern Iowa Speedway after finishing second in the IMCA Sport Modified main race in Oskaloosa.

OSKALOOSA — It was a pretty big week for Blaine Webster.

On Sunday, Webster joined over 300 fellow students in receiving their diplomas for graduating Ottumwa High School.Four days earlier, the 18-year-old was back in his sport modified stock car for the opening night of racing at the Southern Iowa Speedway, where Webster was the 2019 season track champion at the age of 17.

“This is a tough, tough race track for sport mods with a lot of experienced drivers that show up each week,” SIS track announcer Jerry Mackey said. “For (Blaine) to win the season title at that young age, it’s a pretty impressive accomplishment.”

Webster has been racing sport modified stock cars since he was 15, graduating from the go-karts he began racing around the country when he was just 9. Webster’s two championships, gained by accumulating points throughout the course of entire season, were his first two titles secured as a driver.

“It’s kind of a blessing. With the kind of people that help us out, we wouldn’t be able to do it,” Webster said. “Even before I raced go-karts, I raced dirt bikes and 4-wheelers. Basically anything I could get my hands on, I put the throttle to the floor and took off.”

Webster nearly rallied for a season-opening win at SIS last Wednesday, finishing second to Fort Dodge native Jason Bass in the 15-car sport modified main race after winning his heat race earlier in the evening. Defense of his track championship at Eldon has yet to begin as the raceway on the Wapello County Fairgrounds has had to cancel the first two scheduled nights of racing (April 18 and May 16) due to the coronavirus pandemic.

That hasn’t stopped Webster, however, from finding tracks to turn laps on in 2020. Last week’s return to SIS was the fourth night of racing for Webster having already run once in Donnellson at the Lee County Speedway and twice in Missouri at the Scotland County Speedway in Memphis.

“It’s been tough to find racing due to the coronavirus. I’m just thankful some of these tracks are starting to open back up,” Webster said. “It’s hard to explain. Nothing like this has ever really happened in our world. I guess we just have to keep going.”

Besides have local race tracks that have had to cancel racing, Webster has spent the spring dealing with the fallout of the coronavirus as a high school student without classes to attend and school work to do at home. The extra time has allowed Webster and his father, Ryan, to work on getting the No. 7 purple and gold car ready for another potential championship season.

“My dad and I are usually out at the shop working on the car to make it better,” Webster said. “It’s really good when you come back to a track where you’ve had so much success. Being a track champion is pretty special. It’s amazing how far we’ve come.”

Webster’s father, mother, sister and girlfriend were part of the 10 allotted pit crew members for each driver at the Southern Iowa Speedway. The second-place finish in the IMCA Sport Modified division brought with it a $300 payout and valuable points as Webster hopes to put together another consistent season that was even in question of happening a month ago with many tracks around the Midwest having to remain closed to help mitigate the spread of COVID-19.

“I was definitely worried we wouldn’t even be racing until July,” Webster said. “It’s nice to be racing close to home. It’s nice to come support a local track. It’s good to be talking with our friends again and being, I guess you could say, semi-back to normal.”

Finding tracks to race at and not having spectators in the stands has been an adjustment for drivers so far this spring. Once the green flag drops, however, it’s been business as usual for Webster with his focus shifting on putting as much distance as possible between himself and other drivers at the front of the field.

“When you’re in your car, you’re kind of in your own little space anyway,” Webster said. “Hopefully, you’re always social distancing out there on the track. If you’re within six feet of another driver out there, things can get a little hairy anyway. My goal is to say several feet away from the other drivers.”

Webster plans on racing at Eldon as soon as the track opens up. Tuesday’s announcement by Iowa Gov. Kim Reynolds officially opening all tracks for spectators effective June 1 comes five days ahead of the next scheduled race date of Saturday, June 6 at the Eldon Raceway.

“That’s where I’m living now, so Eldon has kind of become my unofficial home track,” Webster said. “I’ll definitely be there, SIS (on Wednesday nights), Donnellson on Fridays and we’ll try to make some of the bigger shows as well.

“I want to race as many nights as a I can when me or my dad are not working. I definitely feel like I have a target on my back every time I head out for a race. We’re just going to have to be on our best game hold it to the floor.”

OTTUMWA [mdash] Jimmy L. Vannoy, age 74, of Hedrick, passed away on Friday, July 3, 2020 at the University of Iowa Hospitals and Clinics in Iowa City. Jim was born on October 5, 1945 the son of Theodore and Bernadine (Paxton) Vannoy in Farson, Iowa. He attended school in Farson and later gra…

OTTUMWA [mdash]Christine A. Keasling, 91, of Ottumwa, died at 3:23 a.m. July 6, 2020 at Vista Woods Care Center. Her body has been cremated. No services are planned. Reece Funeral Home is in charge of arrangements.