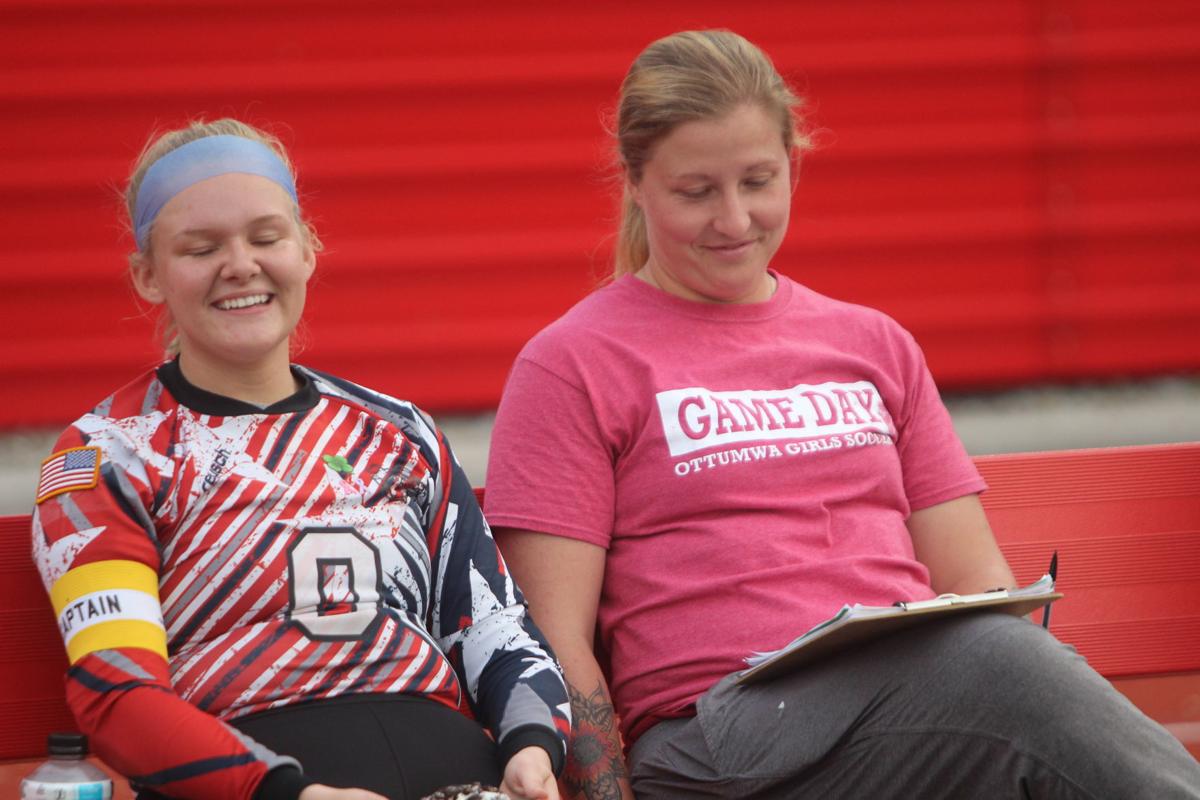 Ottumwa senior goal keeper Savannah Rupp shares a few final moments on the bench with head coach Whitney Reber following a 10-0 loss to Iowa City West in the Class 3A regional tournament on Thursday at Schafer Stadium in Ottumwa. 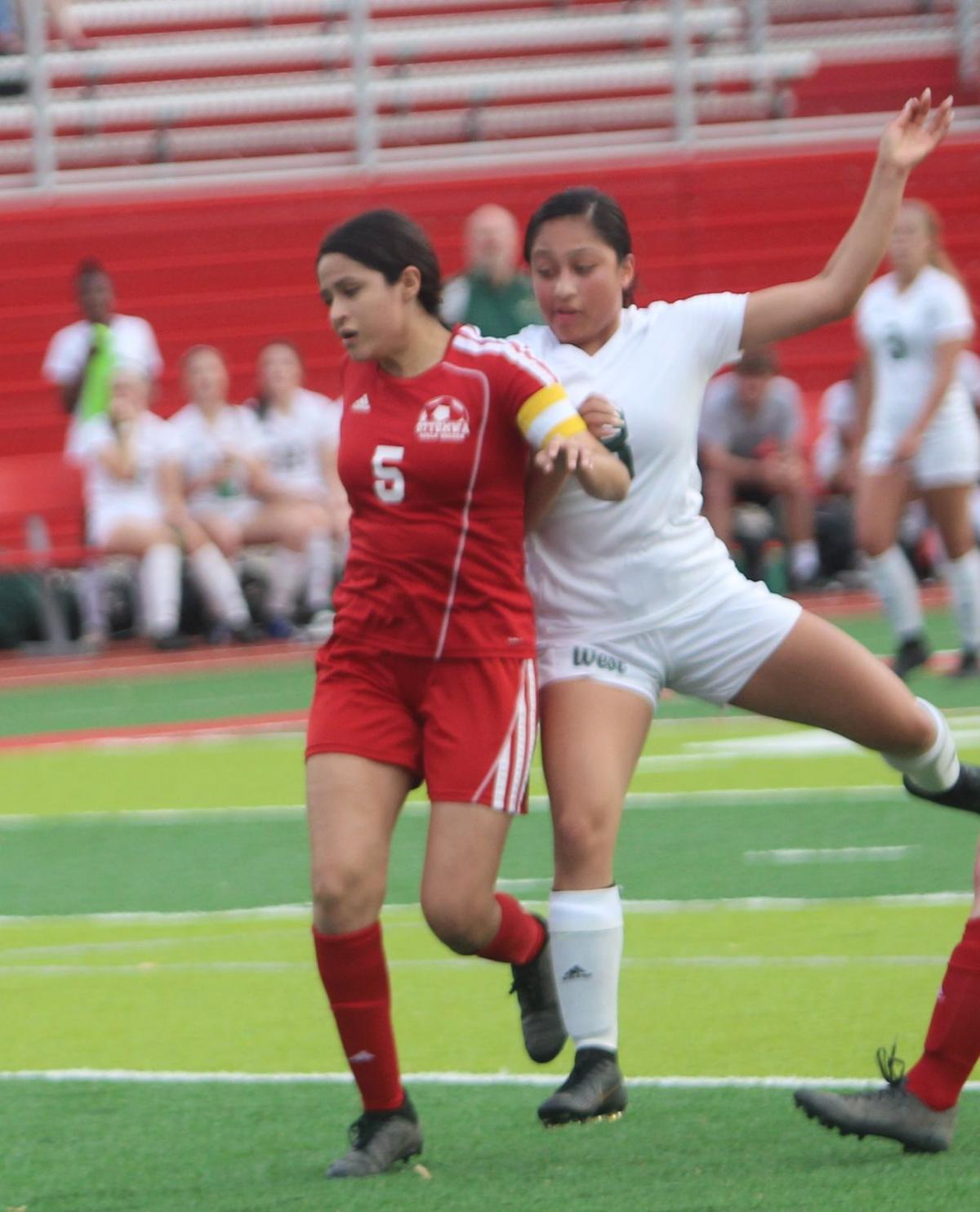 Ottumwa senior Alicia Chacon (5) battles for position for the soccer ball on Thursday during Class 3A girls soccer postseason action against Iowa City West at Schafer Stadium in Ottumwa.

Ottumwa senior goal keeper Savannah Rupp shares a few final moments on the bench with head coach Whitney Reber following a 10-0 loss to Iowa City West in the Class 3A regional tournament on Thursday at Schafer Stadium in Ottumwa.

Ottumwa senior Alicia Chacon (5) battles for position for the soccer ball on Thursday during Class 3A girls soccer postseason action against Iowa City West at Schafer Stadium in Ottumwa.

OTTUMWA — The dream of playing at home in the postseason soon turned into a nightmare for the Ottumwa girls soccer team.

Kenadee Showalter fired a shot that powered through the attempted save of OHS senior goal keeper Savannah Rupp on the first possession of the Class 3A regional opener at Schafer Stadium. It was the first of six goals scored in the first half by visiting Iowa City West, who advanced to an all-Iowa City regional semifinal showdown next week with a 10-0 win over the Bulldogs.

"See you next Wednesday," West senior Rachel Olson said to her coaches after walking off the field with three goals, including the match-clincher in the 66th minute.

The loss prevented Ottumwa from earning four wins in a season for the first time since 2013. Rupp, despite allowing that first goal, did her best to extend her time as an OHS soccer player and student athlete making eight saves in the opening 40 minutes and 13 saves in her final match.

"It didn't really sink in at first that the end was coming, but as the time started ticking away and (West) was getting closer to 10 goals, I kind of realized that I wanted to try and see if we could finish out the final half," Rupp said. "It motivated me to just keep going not just for myself, but for all these girls.

"I just wanted to keep playing. It was definitely hard to step off the field for the last time."

The Women of Troy (5-13) were relentless, firing 21 shots in the first half including a strike from 35 yards out by Olson in the 11th minute that put West up 2-0. Olson would add a second goal just over two minutes later to put Ottumwa (3-13) behind 3-0.

"Since we didn't make it to state last year, we're trying to redeem ourselves," Olson said. "We're really peaking right now and we're starting to get our wins. We've had a lot of motivation not only to extend our season, but to prove to everyone that we're not a bad team. We're a team that's capable of making it to state."

Makenna Vonderhaar put home a ball that was bouncing around in front of the goal with several players scrambling for possession, giving West a 4-0 lead. Merci Sikitu added two goals in a three-minute span, including a strike that followed another great stop by Rupp to put West up 6-0.

"I really didn't know what to expect from Ottumwa. I know, when the pairings came out, our records were pretty similar," Iowa City West head girls soccer coach David Rosenthal said. "We didn't know what we were going to face. We didn't get a chance to scout them. Our girls are hitting a stride right now. We started out the season really struggling, but we've gotten stronger and stronger as the season has gone on. I'm glad to see our strength is coming through at the right time of the season."

For Iowa City West, the next round will feature a grudge match as the Women of Troy will look to avenge last year's first-round regional loss to the Little Hawks as well as a 1-0 loss to open this season. Iowa City High broke a scoreless tie in the final four minutes. Rosenthal believes his team is better equipped to deal with City High and move within one win of a state tournament berth.

"We usually play City High later in the regular season, but whenever we play it's always competitive," Rosenthal said. "Our girls know each other playing together in club soccer. It's always spirited, but it's always respectful. To lose that game earlier this year after playing so hard was tough, but if we could get a draw that would lead to a rematch with City High somewhere along the way, that's the motivation we need. Put City High on the script and we're motivated to play."

While Iowa City West moves on, Ottumwa looks on to next year. Rupp, who was named the inaugural winner of the Soccer Award at the Ottumwa A-Club banquet, is one of six seniors (Emily Grooms, Alicia Chacon, Katherine Pimentel, Jackie Garcia, Holly Leffler) that played their final match at home on Thursday.

"I think they're going to have a great season next year."