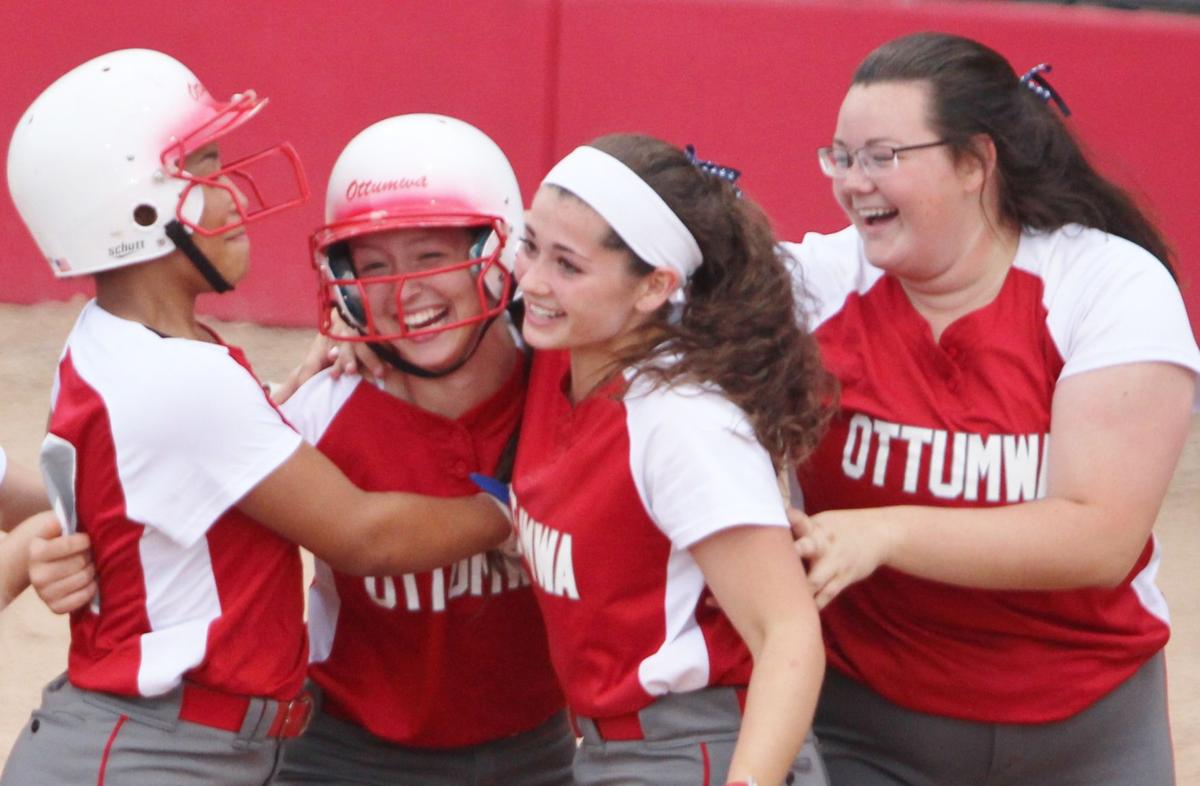 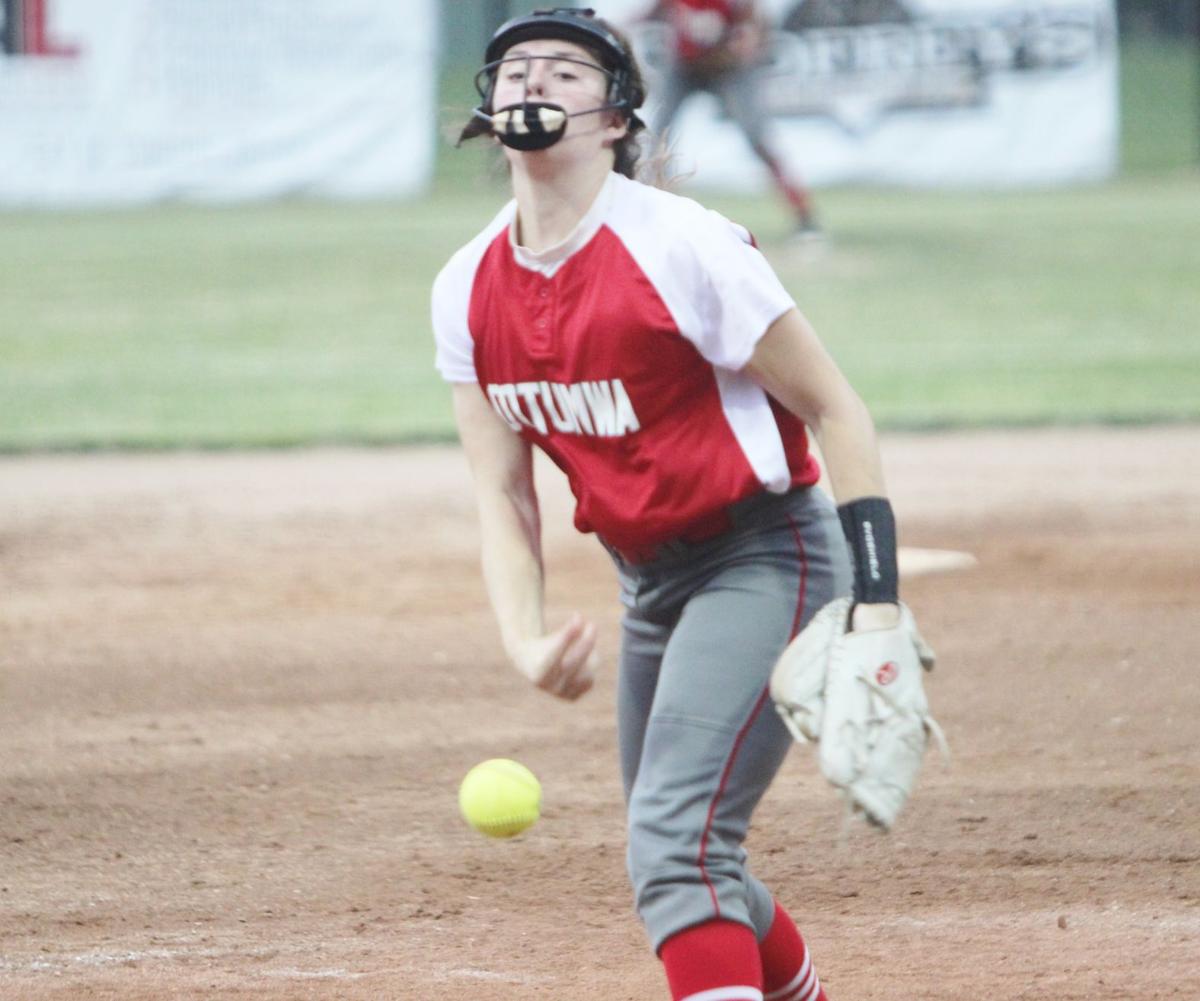 Ottumwa junior Kacy Nickerson fires home her 500th career strikeout on Friday during a 13-3 win over Mount Pleasant at Huston Field in Ottumwa. Nickerson struck out 13 batters for the second straight night, moving her career total to 504. 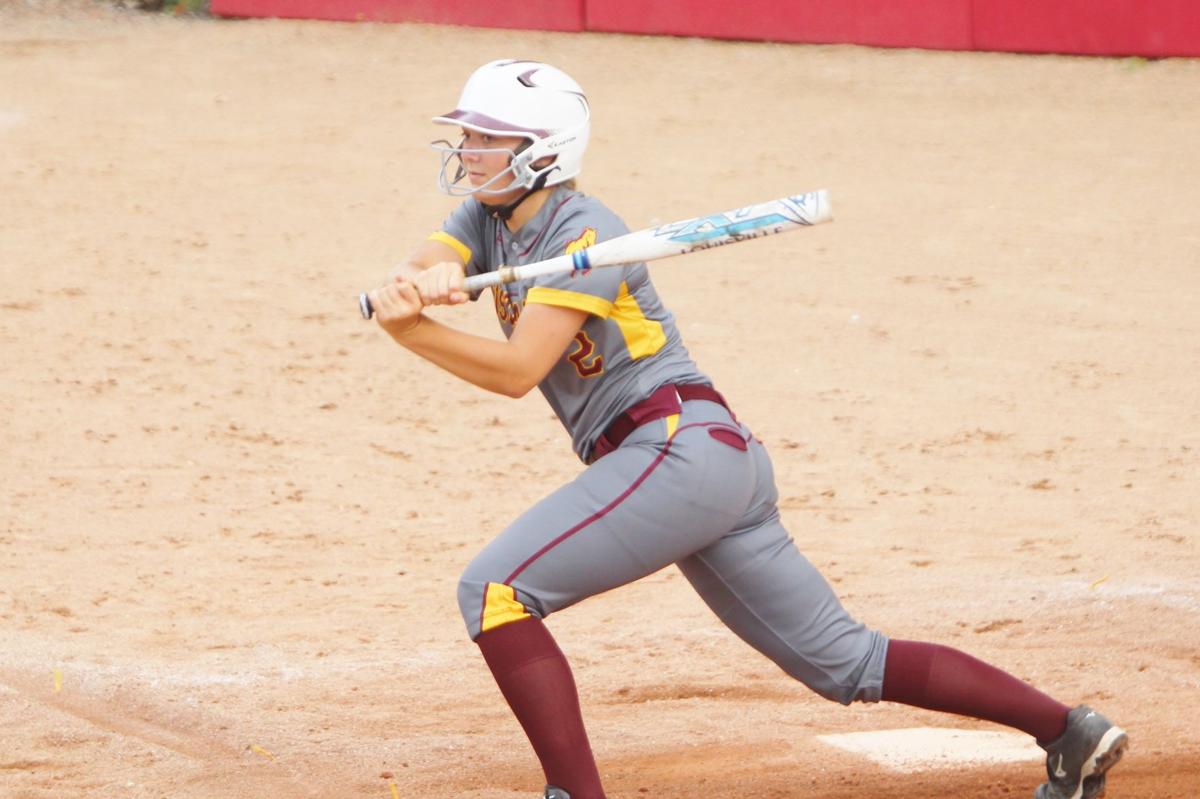 Ottumwa junior Kacy Nickerson fires home her 500th career strikeout on Friday during a 13-3 win over Mount Pleasant at Huston Field in Ottumwa. Nickerson struck out 13 batters for the second straight night, moving her career total to 504.

Kacy Nickerson has experienced it all over the past three days at Huston Field. Two days after hitting her first career home run and one day after pitching a no-hitter, Nickerson recorded her 500th career strikeout on Friday during a 13-3 win over Mount Pleasant.

Nickerson struck out 13 batters for the second straight game and brought the opening game with the 15th-ranked (4A) Panthers to a close with a second straight run-scoring hit. At the time, it appeared Nickerson has driven in two runs with her hit with Ottumwa leading 11-3 in the sixth.

Upon further review, thanks to a check of the Iowa Girls High School Athletic Union rulebook, Ottumwa had a 12-3 lead as Madelyn Jones was given credit for her first career home run. The two-run blast was the highlight of a triangular sweep for the sixth-ranked Bulldogs, which ended with a 14-0 win in four innings over Davis County.

"These are games that, when you look at your schedule, that you hope you don't stumble your toe in," Ottumwa head softball coach Frank Huston said. "We got after Des Moines Lincoln (on Wednesday) pretty hard, we shut out Marshalltown (on Thursday) and things just kind of boomeranged at the plate for us again in these two games. It was good to see a lot of people get some hard hits and long hits. The highlight for everyone was Madelyn's home run."

Jones hit the third home run of the game with Mount Pleasant, following up long blasts by Jillian Heaton and Kaylee Bix with a two-run drive over the fence in left. It was the first home run Jones has ever hit as a softball player on any level.

"I could feel it go off the bat and I saw it going. I was just hoping they (Mount Pleasant) wouldn't catch it," Jones said. "I saw Hannah Huisinga looking at me. I just started going around the bases. It's really heartwarming coming around third base and seeing all my teammates waiting for me knowing that they'll be there for me whether I'm doing good or not doing good."

Morgan Greiner, who hit her team-leading fifth home against Davis County later in the night, talked about the initial home run by Jones and the play of the junior this season.

"She's been working so hard to get on the field all season," Greiner said. "When she got her chance, everyone could see how well she can hit the ball. You could look over and see her mom crying. It was pretty emotional at the time for all of us."

After crossing home plate, however, officials ruled that Jones had not hit first base properly, leading to a recorded out. Jones did hit the extended orange base along first, however. Upon review of the rules, both bases are considered legal to touch, making the home run official.

"I hit the base. I actually stumbled over it because I was so excited," Jones said. "When I got back to the dugout, Frank told me that I was out. I thought he was joking with me at first. It kind of killed my buzz. I was really mad at first, but I wasn't going to let that call ruin it for me."

Huston, in his 46th season as Ottumwa's head coach, was perplexed by the initial call.

"I never anticipated that happening. I'm pretty sure Madelyn was gliding on air anyway when she was going around the bases," Huston said. "I had no idea they could review the ruling. They did that on their own."

After checking the rule, deeming both the orange and white bases at first to be all one base, Jones learned that her home run would count. The result was an eruption in the Bulldog dugout prior to taking the field to face the Mustangs.

"I always thought that both the white and orange bases counted as one base. I'm glad it gets to go down as an official home run for Madelyn," Greiner said. "We all knew it was a home run. It's really great to see multiple people on our team are hitting the ball well."

Nickerson, meanwhile, recorded her 500th career strikeout during the fifth inning against Mount Pleasant. The junior hurler recorded the final five outs on strikes before clinching the game with a run-scoring hit off the fence in the sixth after nearly collecting her third home run of the week.

"It's always been a huge goal of mine to get as many strikeouts as I can," Nickerson said. "Hitting 500 is a huge accomplishment. I'm really glad I met that goal."

Mount Pleasant (13-5) earned a split on Friday rallying for an 11-5 win over Davis County in the opening game of the triangular. The Panthers erased an early 2-0 lead for the Mustangs and went ahead for good scoring six runs on just one hit in the fourth as Mustang starting pitcher Madison Dunlavy struggled with her command, walking four batters and hitting four more in just over three innings.

The Mustangs (5-11) jumped out quickly on Panther starting pitcher Sydni Coleman. Sophia Young continued an incredible week by collecting a hit on the first pitch of the game before Bailea Yahnke hammered an RBI double, one of three hits for the Davis County center fielder in the triangular.

"When you see these young players step up, it gives you a lot of energy as a senior to help keep them on the right track," Yahnke said. "It's all about keeping our energy up at this point."

Davis County is back in action this weekend at the Wapello Tournament. Ottumwa (16-2) will return to the diamond for two big CIML Metro conference road games on Monday at Des Moines East as the Bulldogs face a pivotal week that could help solidify their place as a top seed in next month's 5A regional tournament.

"I think we've cemented ourselves in position to be a top seed. We still need to win some more ball games, and I'm confident that we will," Huston said.