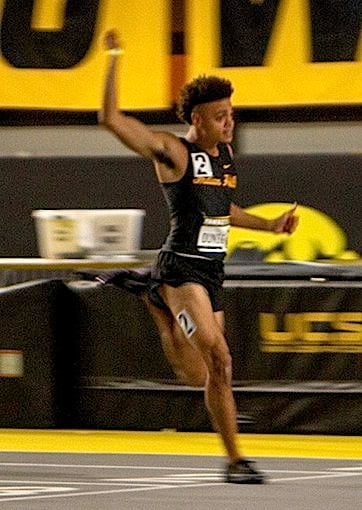 Tyler Dunigan (pictured) finished second for Indian Hills in the men’s 60-meter dash over the weekend at the University of Iowa Hawkeye Invitational in Iowa City. 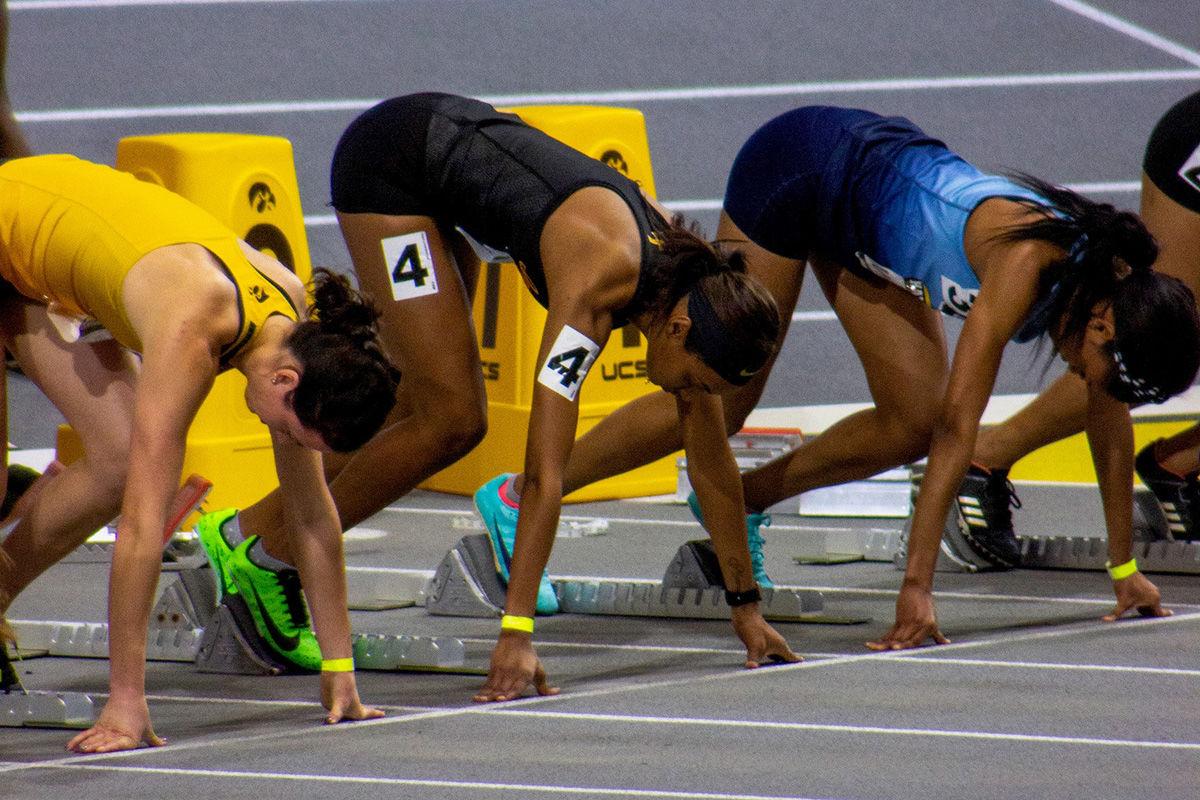 Freshman Kylar Brown (4), seen here lining up for the 200 meter dash, set a new school record for the Indian Hills women’s track and field program in the long jump. Brown reached 16 feet and 5.25 inches at the University of Iowa Hawkeye Invitational in Iowa City

Tyler Dunigan (pictured) finished second for Indian Hills in the men’s 60-meter dash over the weekend at the University of Iowa Hawkeye Invitational in Iowa City.

Freshman Kylar Brown (4), seen here lining up for the 200 meter dash, set a new school record for the Indian Hills women’s track and field program in the long jump. Brown reached 16 feet and 5.25 inches at the University of Iowa Hawkeye Invitational in Iowa City

IOWA CITY – Kylar Brown set a new school record for the Indian Hills women’s track and field team while three members of the Warrior men’s team qualified for the NJCAA national indoor meet at the University of Iowa Hawkeye Invitational.

Brown’s record came in the long jump. The freshman from San Antonio leapt 16 feet and 5.25 inches, an all-time best for the IHCC program. The Warrior women had seven performances in the top five of various events, including a pair of top-five runs in the 60-meter dash with Jocelynn Crowell placing third in 7.95 seconds while Melanie Hall placed fifth in 7.99 seconds.

Crowell also crossed the finish line in 26.08 seconds in the 200 meters, the second-fastest time in program history. Brown was right behind Crowell, clocking the third-fastest time in the 200 among IHCC runners in 26.33 seconds. Destiny Lottie produced the fourth-fastest time, finishing the 200 in 26.7 seconds.

IHCC had three other runners in the 60 meters along with Crowell and Hall. Dasauna Combs ran 8.02, Lottie ran 8.06 and I’Reonia Lightsey finished in 8.32.

Halley Wilmes produced the second-fastest time for the IHCC women’s program in the 600 meters, finishing in 1:44.99. The 4x400 relay unit of Combs, Lightsey, Wilmes and Hall ran 4:12.1 while Haley Revell competed in the shot put, posting a throw of 34 feet and nine inches.

“Kylar had a great double breaking her long jump school record and then coming back in the 200 and running one of her fastest times ever,” IHCC head track and field coach Brett Ewing said. “The depth in our 60 meter dash group was great to see as well. All four ladies are freshmen and that tells the coaching staff that we should have a solid 4x100 meter relay in the outdoor season.

“Crowell ran her lifetime best in the 200 indoors and tied her best in the 60 meters. Melanie really stood out to me as well. This was her first collegiate meet and she didn’t back down. She had a 59.9 split in the 4x400 relay. She is arguably one of our biggest competitors on the team. Halley continues to edge closer to the 600 meter national qualifying mark. She’s is a good spot right now.”

The national team rankings will be released on Jan. 29.

For the IHCC men, Kendall Banks-Price, Chris Hudnall and Elijah Berry secured places in the national indoor meet. Banks-Price qualified for the high jump with a leap of 6-6.75, Hudnall qualified in the 60-meter hurdles and Berry advanced in the 400 meters, finishing second at the Hawkeye Invite in 49.17 seconds. This will be the fourth consecutive year in which the Warriors have had a national qualifier in all three events.

Floyd Pond, who missed qualifying for nationals by .01 in the 60 meters, finishing sixth for in 6.89 seconds. Pond’s time was 6.88 in the prelims, making him the third-fastest 60-meter runner in program history.

Herman Chongwain’s 11th-place finish in the 60 meters came with a personal best time of seven seconds flat, tying him for fifth all-time at IHCC. Bar-Shimon posted the second-fastest 600 meters in program history, narrowly missing the national qualifying mark by less than one second.

Dunigan’s time of 6.78 seconds in both the 60-meter prelims and finals means the IHCC sprinter now has five of the six fastest times in that event in program history. Overall, the IHCC men had 11 all-time top-five performances.

The coaching staff was very pleased with how the meet played out. The first meet back from winter break is always a bit tricky,” Ewing said. “As a coach, you hope to maintain fitness over break. We had several athletes step up and perform very well. Banks-Price is really finding his groove in the high jump. Dunigan ran sub-6.8 in the 60 meters for the first time in his career, doing in in the prelims and the finals. His performance really opened a lot of doors for him from a recruiting standpoint. He’s showing that he’s one of the best 60-meter runners in the country.

“Our long sprinters competed very well too. It’s early in the year but Berry, Butts, Reed and Bar-Shimon are currently 1-2-3-6 in the national rankings. Our goal going into this meet was to pick up two-to-four more national qualifiers and we accomplished that goal with three.”

The IHCC team will split up this weekend. While the majority of the Warriors are at the University of Nebraska’s Graduate Classic, the rest of the Warriors will make the closer trip to Central College in Pella to compete in the Dutch Athletics Classic at the H.S. Kuyper Fieldhouse starting at 12:30 p.m.